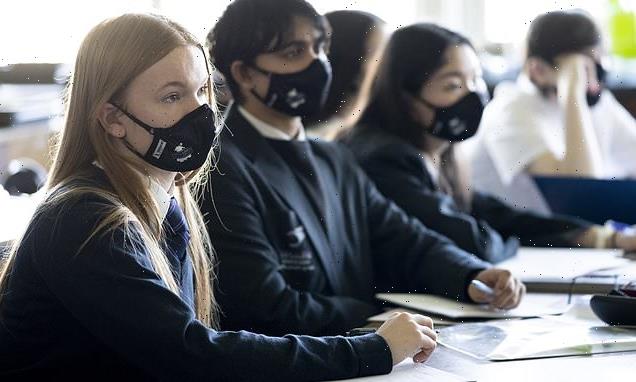 Teaching unions today called for mandatory masks in secondary school classrooms until the end of term.

England is preparing to drop the rule as part of the the next phase of lockdown easing on May 17 because infection rates in schools are so low.

But the National Education Union (NEU) alongside five other unions have demanded it remain until June 21.

In an open letter to the education secretary, they claimed lifting the measure too soon could have ‘consequences’ for the health of pupils, teachers and parents.

The letter suggests that masks may be one of the reasons infections have not yet spiked in schools.

Campaign groups say they have received multiple reports of children suffering both mental and physical harm as a result of wearing a mask for up to eight hours a day.

The call for a more cautious loosening of restrictions comes after unions called for classrooms to be phased back in March amid fears of a big boom in transmission.

But infections barely rose, despite every student and school staff member being tested twice a week for the disease.

It comes after official figures today showed almost nine in ten secondary schools suffered no Covid cases just a week after they reopened. 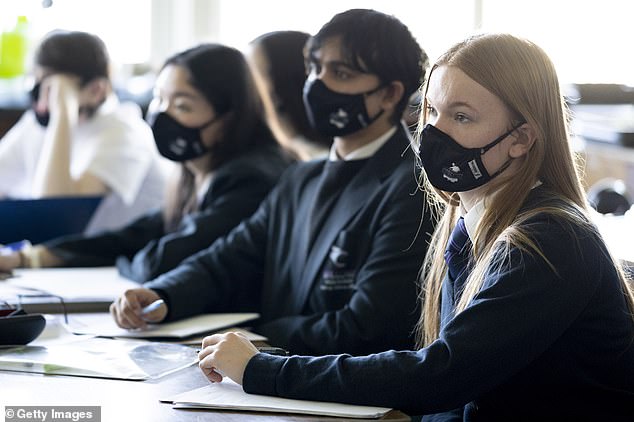 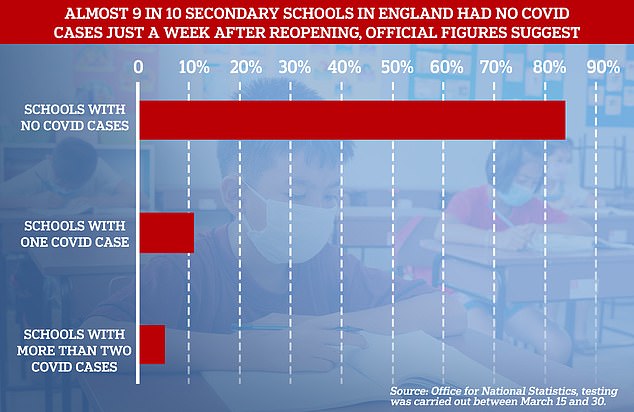 The NEU and NASUWT submitted the letter to Education Secretary Gavin Williamson, alongside support staff unions Unite, Unison and GMB.

They say mask are ‘an essential part of the wider system of control in schools’ and said if they were to be lifted then schools would be left with virtually no other mitigation.

Almost nine in 10 secondary schools in England had no coronavirus cases after they reopened, official figures suggest.

Surveillance data showed only nine of 80 schools surveyed had spotted one infected pupil or staff member in the fortnight ending March 31. Four saw at least two cases, according to the Office for National Statistics report.

Almost 10,000 secondary teachers and pupils were swabbed for the study, which is carried out regularly to track the spread of the disease in schools.

Just 0.34 per cent of pupils tested positive — compared to 1.2 per cent in December, when Covid was spreading rapidly in the community. Only one in every 500 teachers were infected in the last round of testing, down from one in 60 before Christmas.

It comes after teaching unions warned Number 10’s ‘big bang’ reopening of schools on March 8 — the first step in the ultra-cautious roadmap back to normality — was ‘madness’ and risked an explosion in cases.

Unions called for year groups to be sent back in phased stages, claiming the mass return could put teachers at risk from the virus.

They wrote: ‘To strip these necessary protections, when there are already too few mitigation measures in schools, and when rates of Covid are still significant, would have consequences for the health of our children and their parents as well as their communities.’

There is still little evidence that schools are a hotbed for the virus, with latest Office for National statistics data showing 84 per cent of 80 secondary schools it sampled had zero new cases between March 15 to 30.

Around 0.33 per cent of pupils and 0.32 per cent of staff in the schools were infected with the virus. This was far below the rates in November and December, when it was above one per cent for both categories.

Most recent Public Health England data shows there were just 13 clusters of respiratory infections in the week up to April 22. For comparison there were 25 in offices and workplaces, where masks are not always mandatory.

On top of having to wear masks in classrooms and corridors, pupils and staff must constantly social distance where possible and year groups aren’t allowed to mix on breaks.

Schools minister Nick Gibb said last week he hoped that pupils would no longer have to wear face masks in secondary schools and colleges in England from mid-May.

But he added the decision on whether to lift the precautionary measure when further easing of social contact limits indoors are confirmed, which will be no earlier than May 17, will depend on ‘the data’.

The Department for Education (DfE) has said it expects to remove the requirement on secondary school pupils and staff to wear masks in class as part of the next stage of lifting the lockdown.

Any changes to the policy will be confirmed with one week’s notice following a review of the latest data on infection and vaccination rates.

Dr Deepti Gurdasani, an epidemiologist at Queen Mary University of London, who is among the signatories to the letter, said: ‘Scientists, school staff, parents and students are alarmed.

‘We do not want a repeat of past mistakes that previously led to new waves, higher deaths, and prolonged lockdowns.

‘That’s why we’ve come together to urge the Government to consider the global and national evidence on current infection rates in schools.

‘Face coverings should be continued in schools after May 17, with review prior to the next stage of the road map on June 21, to avoid the risk of new outbreaks.’

A DfE spokeswoman said: ‘It is expected that face coverings will no longer be required in classrooms at step three of the road map, which will be no earlier than May 17.

‘The lifting of further restrictions at step 3 will follow a review of the latest data on infection and vaccination rates, and all other school safety measures, including regular asymptomatic testing, will remain in place.’