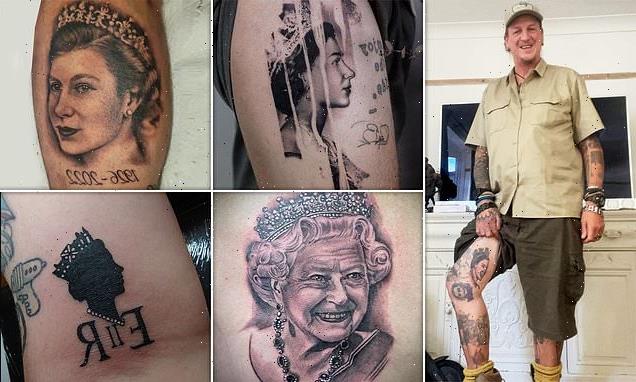 Tattoo artist inks Queen’s portrait on his own leg – next to an image of the Joker: Royal fans reveal more body art in tribute to the late monarch

Royal fans have been paying tribute to the Queen following her death by heading down to their local tattoo parlour, in one case a tattoo artist inked a portrait of the late monarch on his own leg.

Michael Purkiss, 57, was so upset by the death of Queen Elizabeth II that he decided to tattoo a portrait of her just above his left knee in his Southampton-based parlour.

Have you got a tattoo dedicated to Queen Elizabeth II?

Do you have any royal-themed ink?

It took just over two painful hours and it is placed next to an existing tattoo of fictional superhero Batman’s nemesis the Joker.

He decided to get the tattoo as he has the same birthday as the Queen, and he used to joke with people that every year she would send him a cake.

He chose a photo of the Queen, aged 26, when she was on her way to parliament for the first time – in the image, she is smiling and looking away from the camera.

Mr Purkiss said: ‘I thought that I needed to keep her going somehow so I thought I’m going to tattoo her on my leg.

‘I looked on Friday to see what the best picture was, and found a photo of when she was younger and smiling.

‘Then I tattooed it on my leg upside down, but when you are doing it yourself it hurts more, and you have to do it upside down.

‘I tattoo other people, but this hurts worse.’

Mr Purkiss continued: ‘I did it because she always had a happy little face and she was never judgmental with anyone, no matter what colour you are or what tattoos you have.

‘She just treated you the same as everyone else, she was very none-judgmental about everything.’ 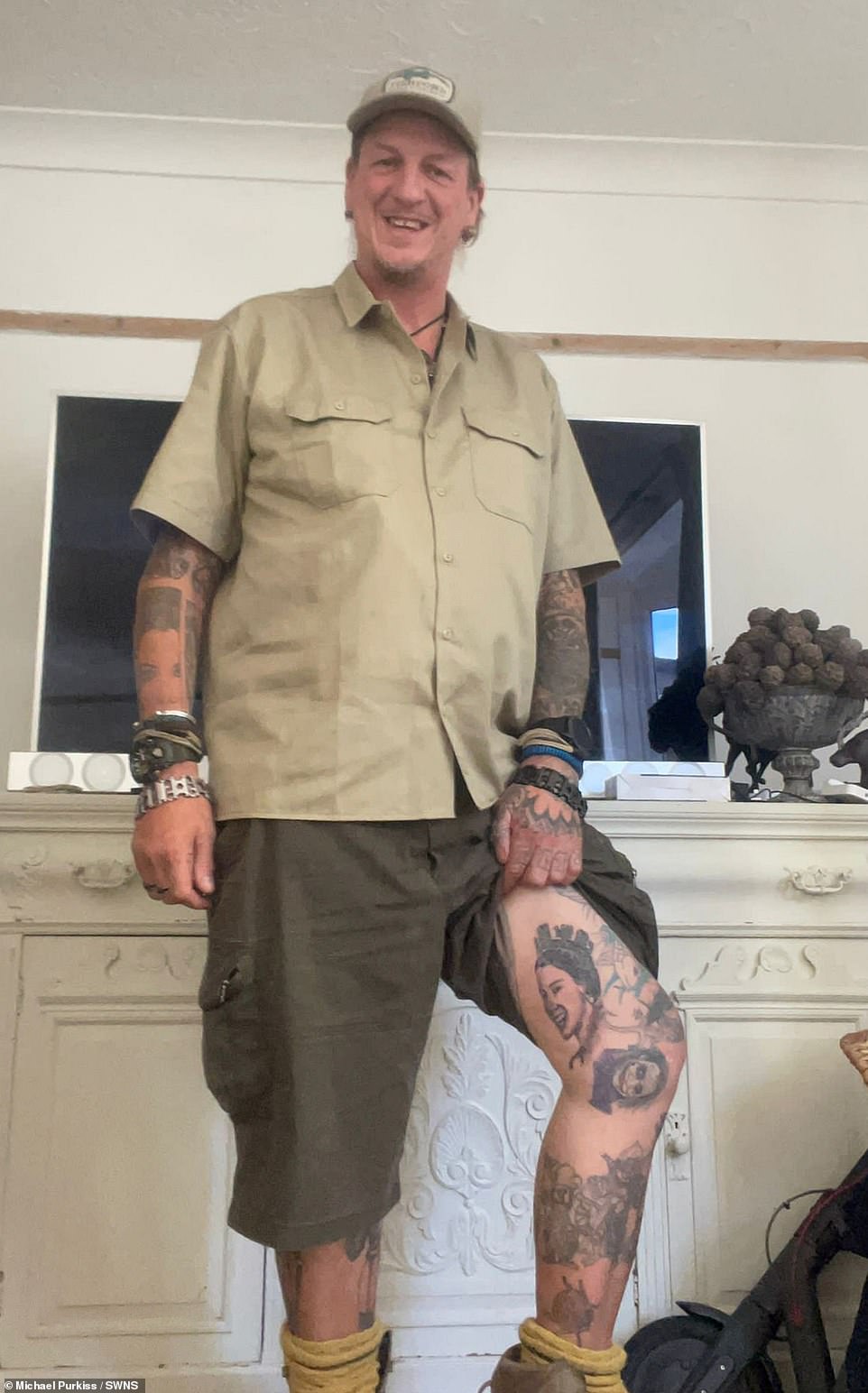 Tattoo artist Michael Purkiss, 57, decided to ink a portrait of Queen Elizabeth II on his own leg after hearing about her death 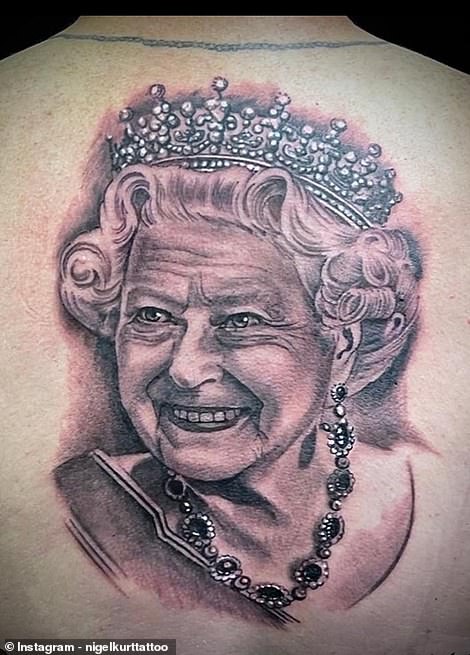 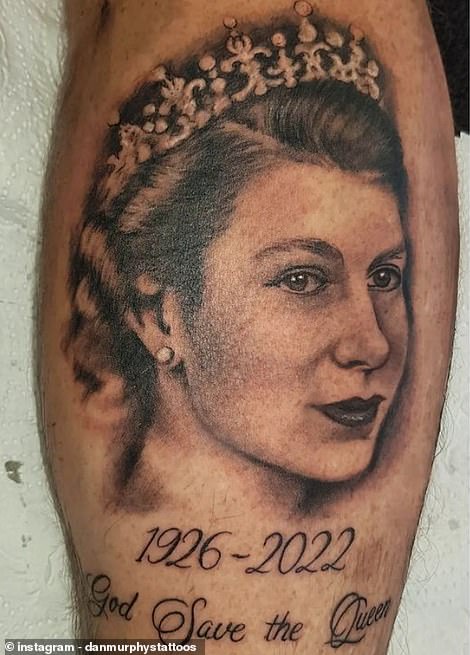 Tattoos dedicated to Queen Elizabeth show her at a variety of different ages, from around the time of her coronation through to her last few years 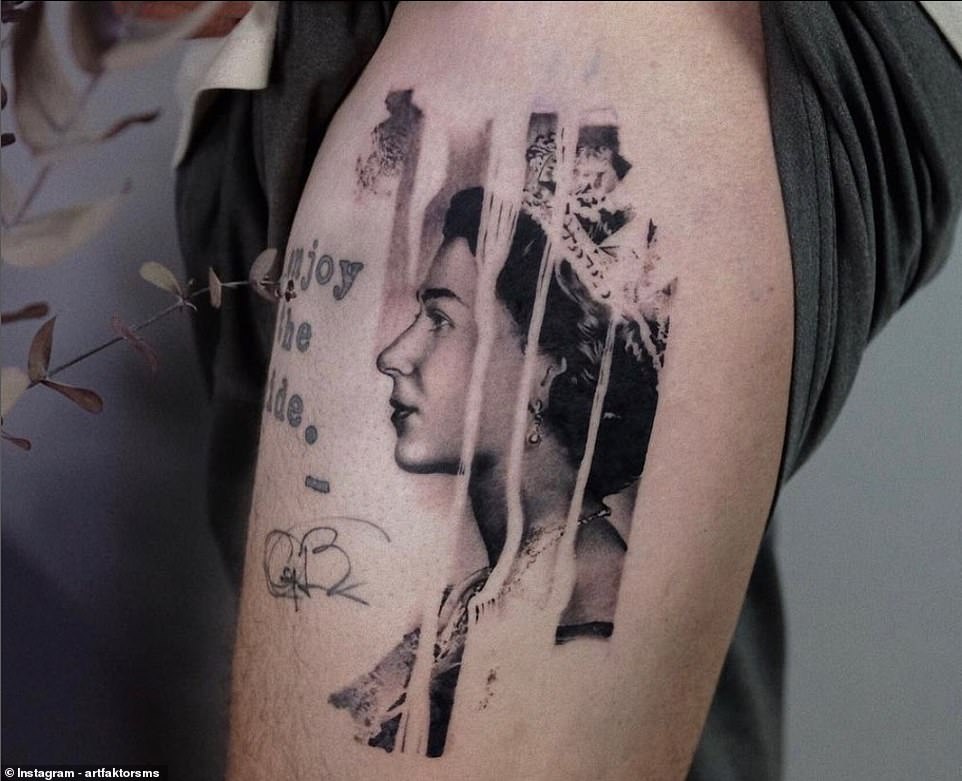 This tattoo depicts a younger Queen Elizabeth wearing her crown in a side portrait position, with artistic streaks across 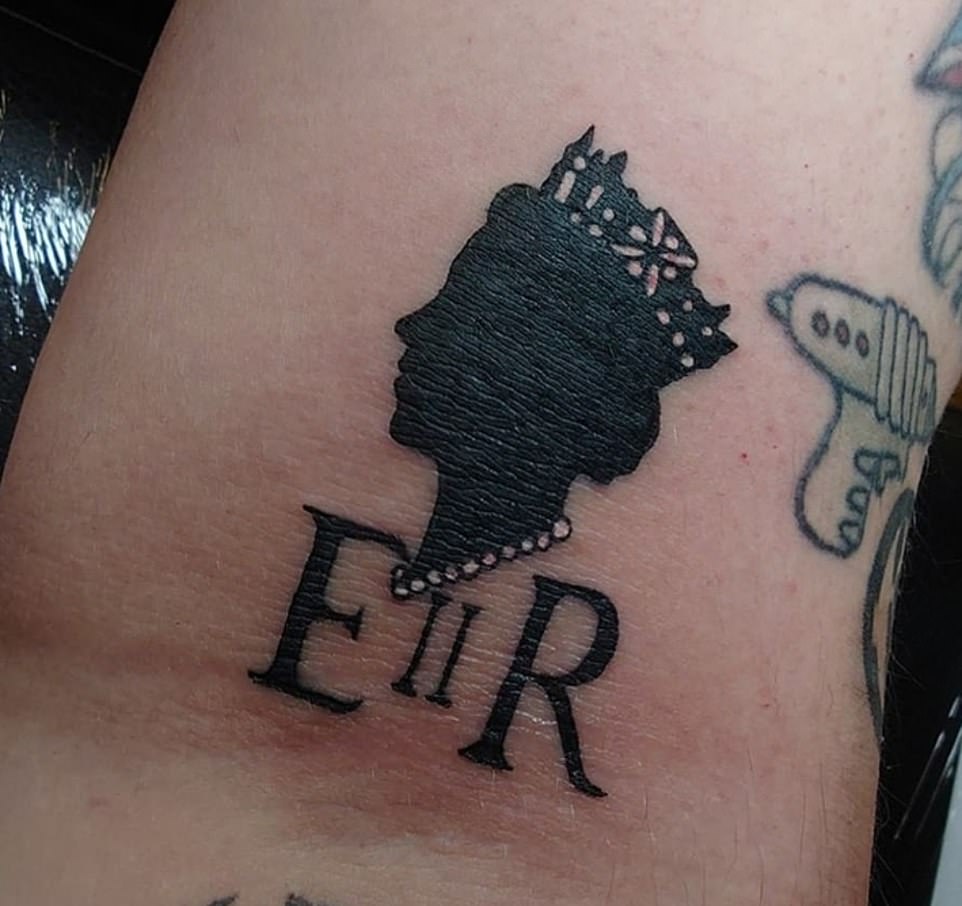 A simple but effective silhouette tattoo in the style of a postage stamp, with the Queen’s pearls and crown jewels  standing out in white ink 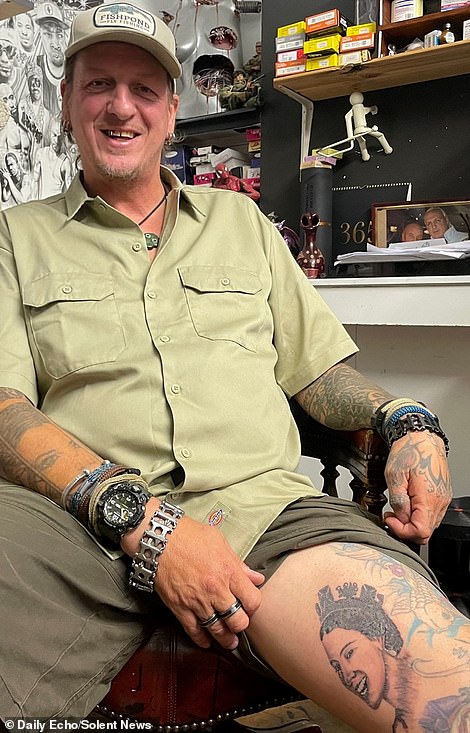 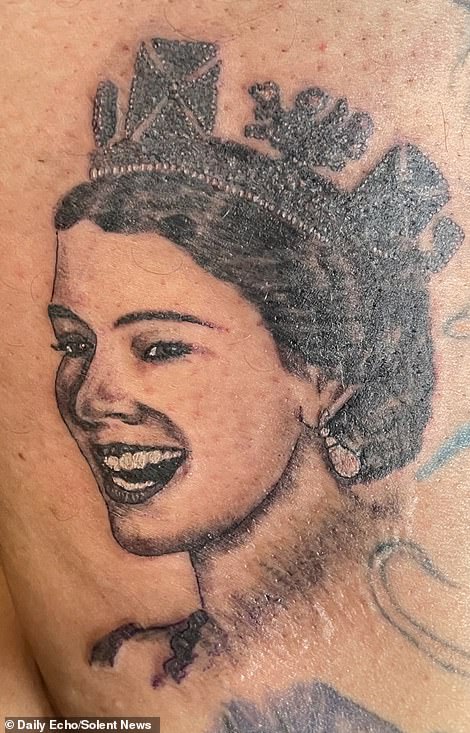 Mr Purkiss spent two hours creating the tattoo on his left leg, which sits just above a tattoo of Heath Ledger playing the Joker

Mr Purkiss said he was ‘really sad’ when he found out the Queen had passed away, as he had ‘always looked up’ to her.

He added: ‘On Thursday, I was watching the news with my mum and it was sad because she was ill.

‘Then later on in the afternoon we obviously heard that she had died.

‘Her birthday is on the same birthday as mine, so I felt really sad as I was always happy to tell everyone each year that the Queen sends me a cake.

‘I always looked up to the Queen, thinking that she sets how we should act and treat each other – like the old school stuff like opening doors for people.’ 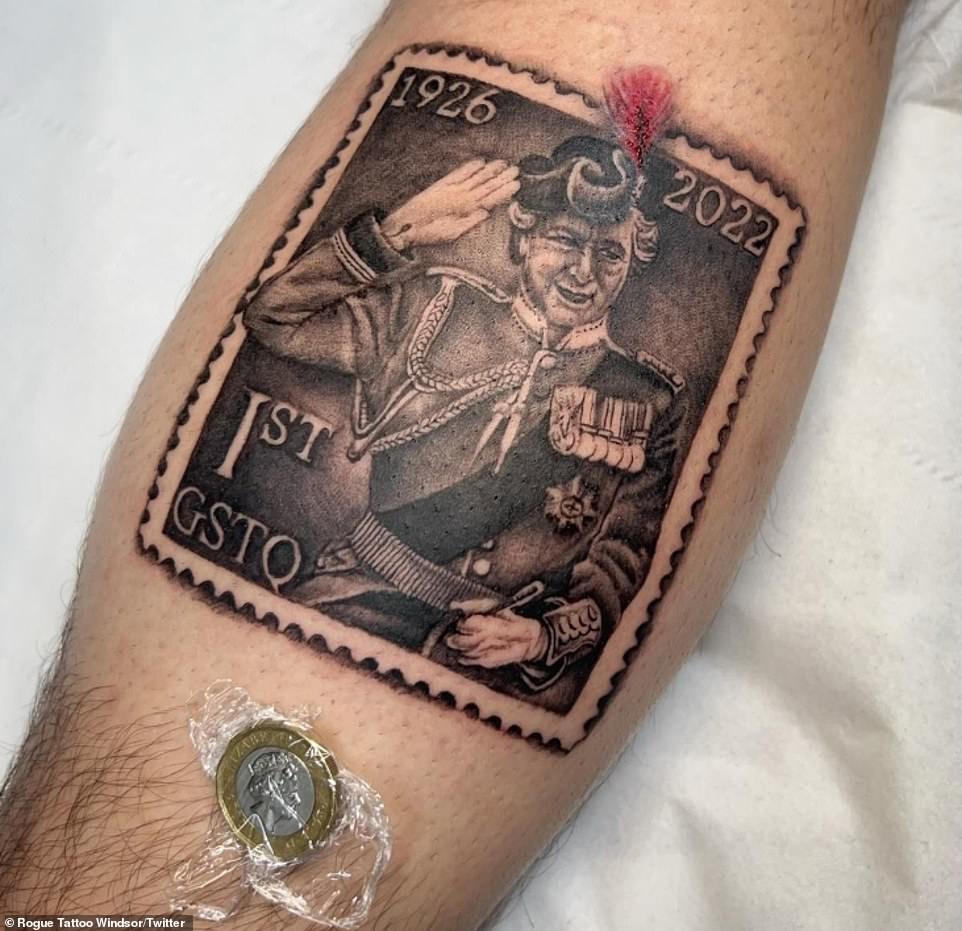 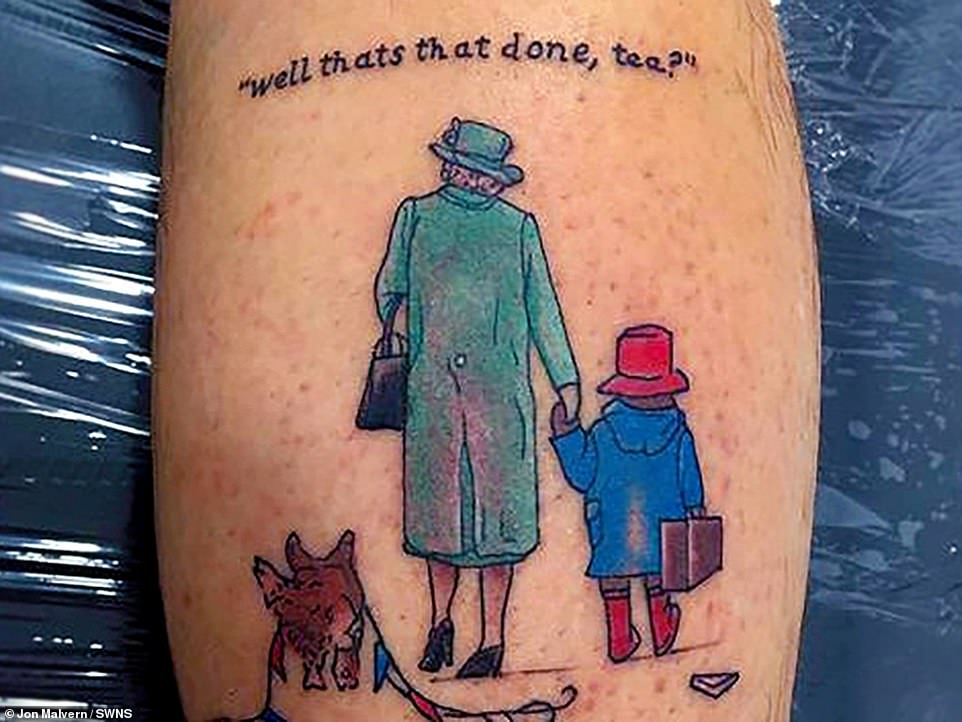 The illustration by Eleanor Tomlinson, which has gone viral since her Majesty’s death, has been a popular source of inspiration for tattoo artists and clients 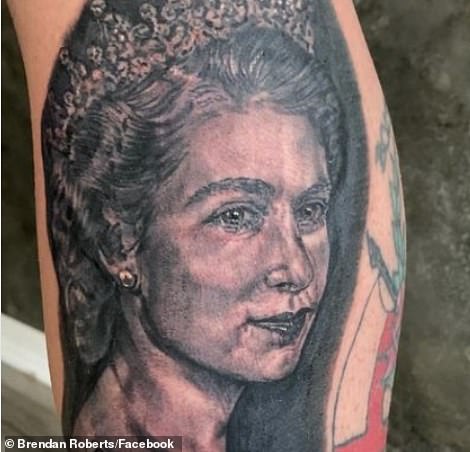 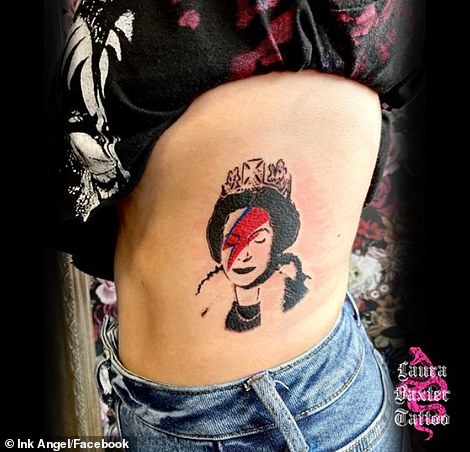 In one portrait of her majesty, the artist has incorporated the famous red bolt that was worn across the face of David Bowie’s alter ego, Ziggy Stardust 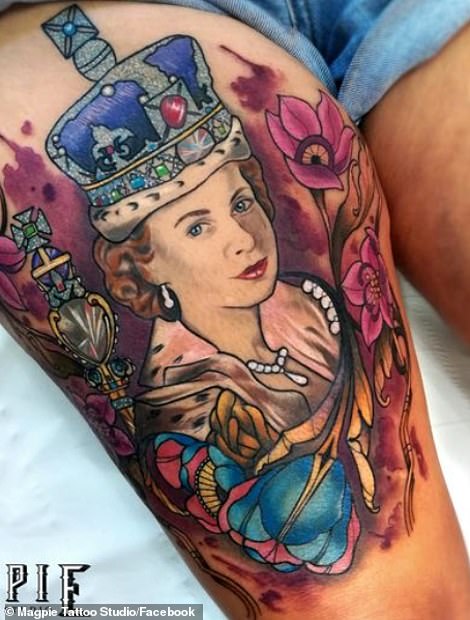 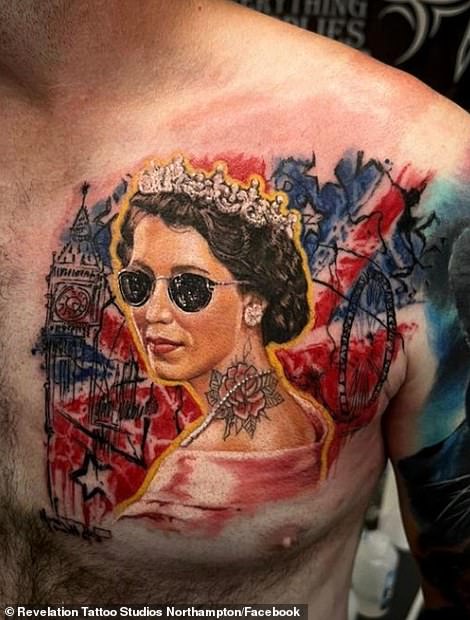 One tribute to Her Majesty (left) shows the Queen wearing what appears to be a depiction of the crown worn by the Queen during her coronation. Her Majesty was also depicted across the upper-left side of a man’s chest (right) wearing sunglasses, and with a tattoo of a pink-coloured rose across her own neck

One tattoo shop in Windsor said that they have had numerous requests from Coldstream Guards, who have a strong presence in the region, to ‘immortalise Her Majesty for their memory’.

They posted an image online of a tattoo which shows the Queen saluting while dressed in her military uniform, adorned with a medal on her chest. It depicts the late monarch using only black ink, except for the flash of crimson of the feather on her hat.

A popular choice for tribute tattoos is the Queen hand-in-hand with the endearing bear from Peru, Paddington.

‘Well that’s that done, tea?’ reads the caption on a tattoo of the Queen on a man’s shaven calf, with an illustration of Her Majesty wearing a pea-green coat.

The illustration by Eleanor Tomlinson, which has gone viral since her Majesty’s death, has been a popular source of inspiration for tattoo artists and clients.

Paddington Bear is shown holding her hand as one of her beloved corgis, that seems to have mischievously run off with some bunting, joins them at her side.

There is also a marmalade sandwich, that the Queen comically pulled out of her handbag during the Platinum Jubilee as part of sketch with Paddington Bear, that has been left behind

One clients chose to wrap his leg with a portrait of the late monarch, from her days of youth, in black ink in front of a vividly coloured union jack.

She is illustrated with her tiara, a pair of stud earrings and a dark dress which begins just below her shoulders before being faded out. 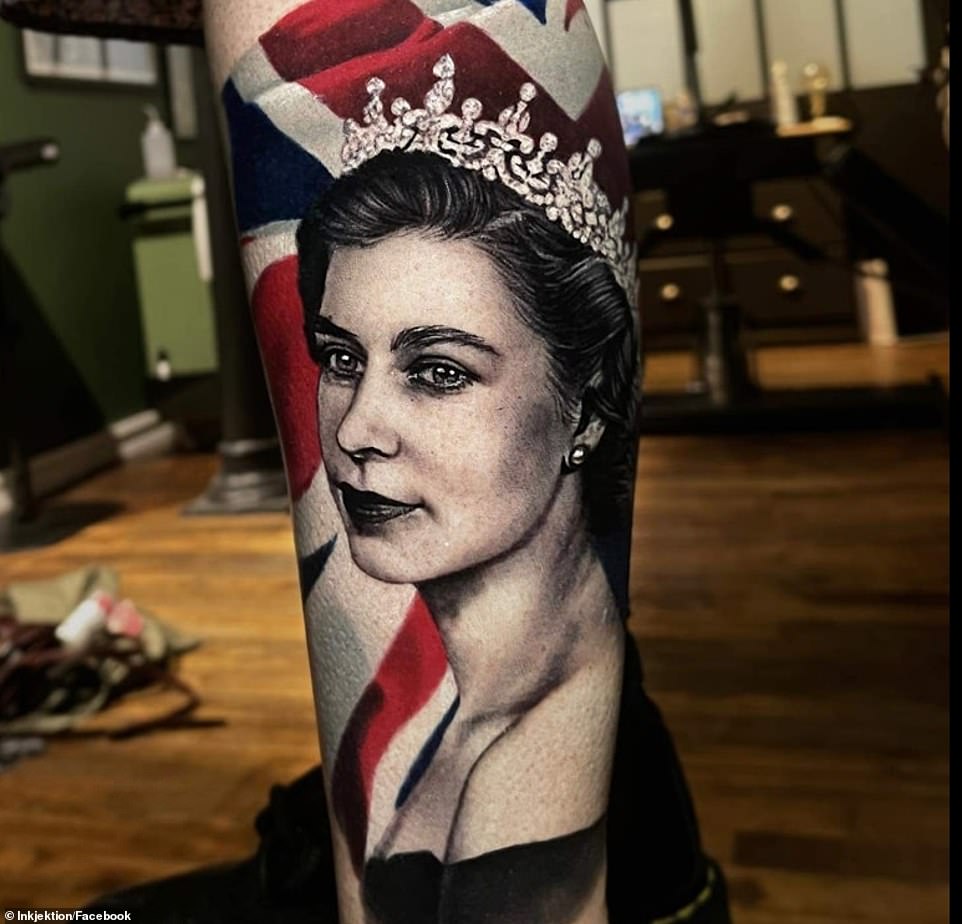 One clients chose to wrap his leg with a portrait of the late monarch, from her days of youth, in black ink in front of a vividly coloured union jack 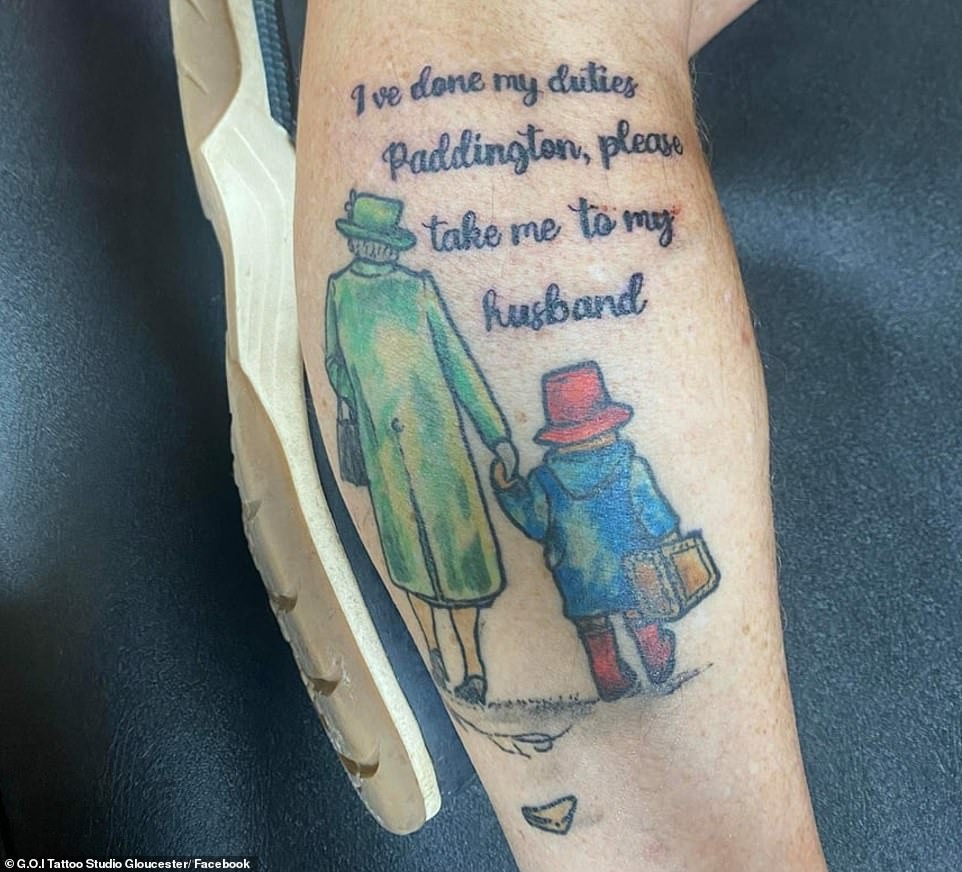 Paddington Bear is shown holding her hand heading into the abyss as one of her beloved corgis, that seems to have mischievously run off with some bunting, joins them at her side

Paddington Bear has become a popular motif for the monarch, particularly after this year’s Platinum Jubilee which celebrated 70 years of the Queen’s reign. 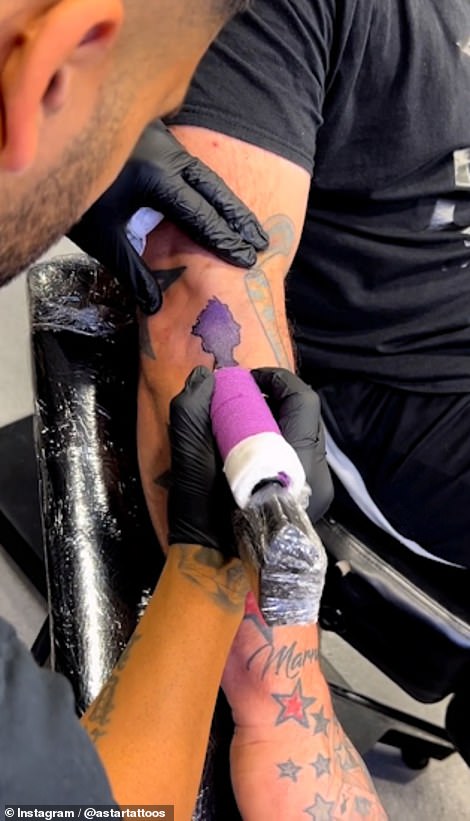 People have been flocking to their local tattoo parlour to pay tribute to our late monarch, Her Majesty Queen Elizabeth II

‘I’ve done my duties Paddington, please take me to my husband,’ read a tattoo on the side of one client’s shin.

In another portrait of her majesty, the tattoo artist had incorporated the famous red bolt that was worn across the face of David Bowie’s alter ego, Ziggy Stardust.

The Queen had been illustrated as a stencil in black ink with a shock of red and touch of blue across her face in the shape of a lightning bolt.

A tattoo which was only done yesterday shows a bust portrait of the Queen in black ink, and her royal cypher, EIIR, placed at the bottom of the illustration of the monarch in large.

Her Majesty was also depicted across the upper left side of a man’s chest wearing sunglasses, and with a tattoo herself.

The artist added a tattoo across the late monarch’s of a pink-coloured rose that can be seen underneath a simple string pearls.

The Queen is shown to be wearing a pastel-pink dress and looking back at us behind a pair of shades.

In the background is a Union Jack that appears to have been given a watercolour effect by the artists, with outlines of famous London landmarks like Big Ben and the London Eye.

The tribute to Her Majesty by Magpie Tattoo Studio shows the Queen wearing what appears to be a depiction of the crown worn by the Queen during her coronation.

She is also surrounded by tall-stemmed fuchsia and blue flowers with a magenta watercolour-effect background, with her sceptre bearing a large gem behind her.