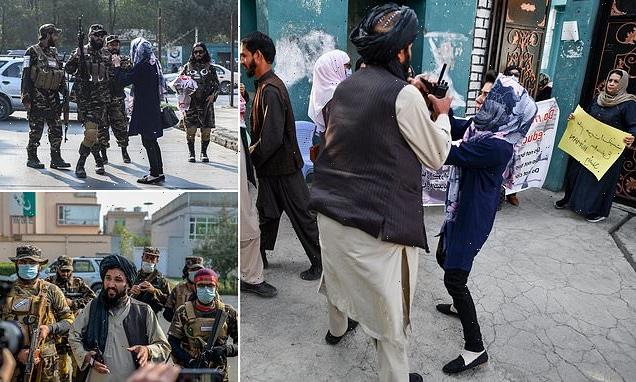 Taliban thugs today pushed women protesters and fired shots in the air to break up a demonstration in Kabul calling for girls to be allowed to attend school.

A group of six women gathered outside a high school in eastern Kabul demanding the right for girls to return to secondary school, after the hardline Islamist group excluded them from classes earlier this month.

Male students have been ordered back to secondary school and university – primary schools having already reopened to boys and girls – but two weeks ago women were told they could not return to education until an ‘Islamic environment’ was in place.

The women today unfurled a banner that read ‘Don’t break our pens, don’t burn our books, don’t close our schools’, before Taliban guards snatched it from them.

The militant thugs pushed back the women protesters as they tried to continue with the demonstration, while a foreign journalist was hit with a rifle and blocked from filming. A Taliban fighter also released a brief burst of gunfire into the air with his automatic weapon in an effort to disperse demonstrators.

The demonstrators – from a group called the ‘Spontaneous Movement of Afghan Women Activists’ – took refuge inside the school. 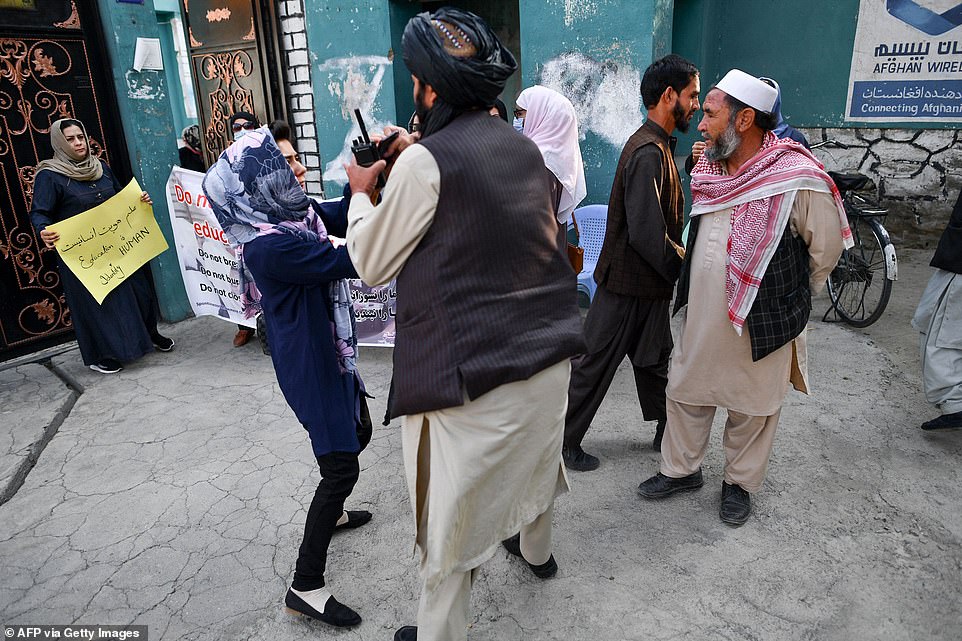 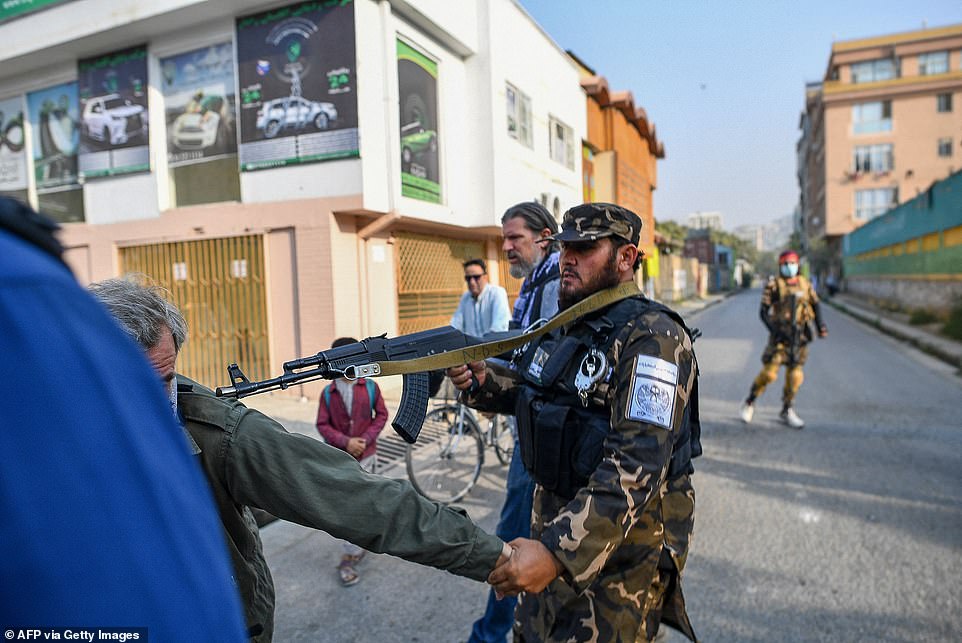 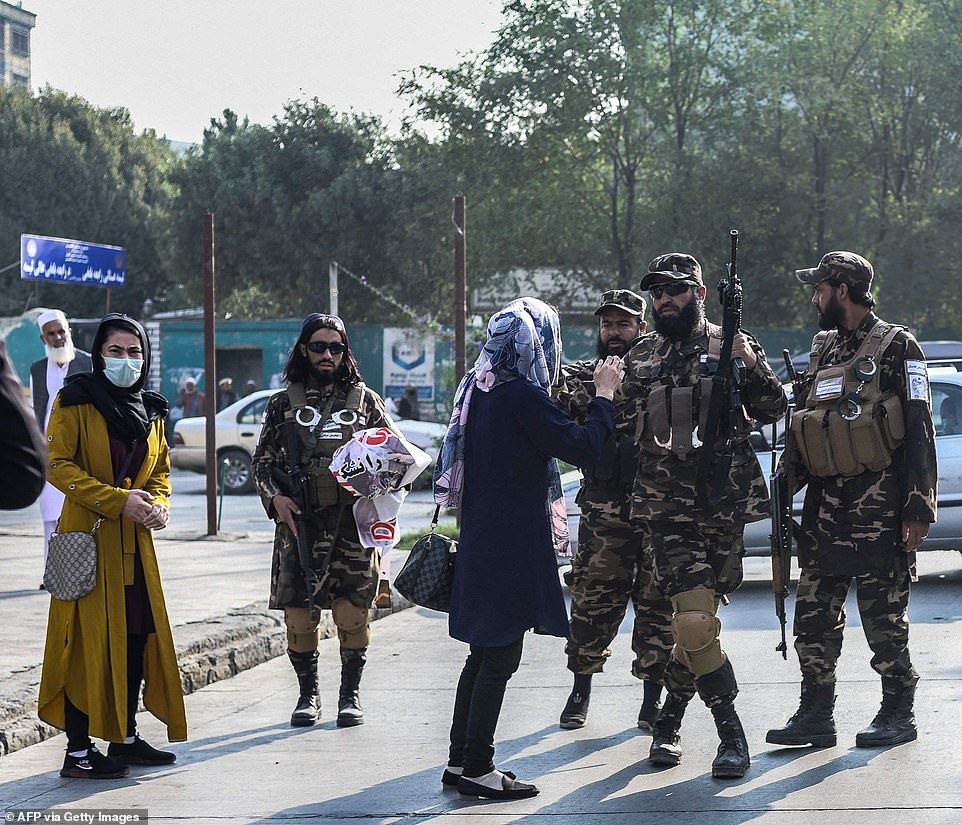 The militant thugs pushed back the women protesters as they tried to continue with the demonstration, while a foreign journalist was hit with a rifle and blocked from filming

Taliban guard Mawlawi Nasratullah, who led the group and identified himself as the head of special forces in Kabul, said the demonstrators ‘did not coordinate with security authorities regarding their protest’.

‘They have the right to protest in our country like every other country. But they must inform the security institutes before,’ he said.

Isolated rallies with women at the forefront were staged in cities around the country after the Taliban seized power, including in the western city of Herat where two people were shot dead.

But protests have dwindled since the government issued an order that unsanctioned demonstrations and warned of ‘severe legal action’ for violators.

The Taliban follow a strict interpretation of sharia law that segregates men and women, and have also slashed women’s access to work.

They have said they need to establish the right conditions before girls can return to the classroom, but many Afghans are sceptical. 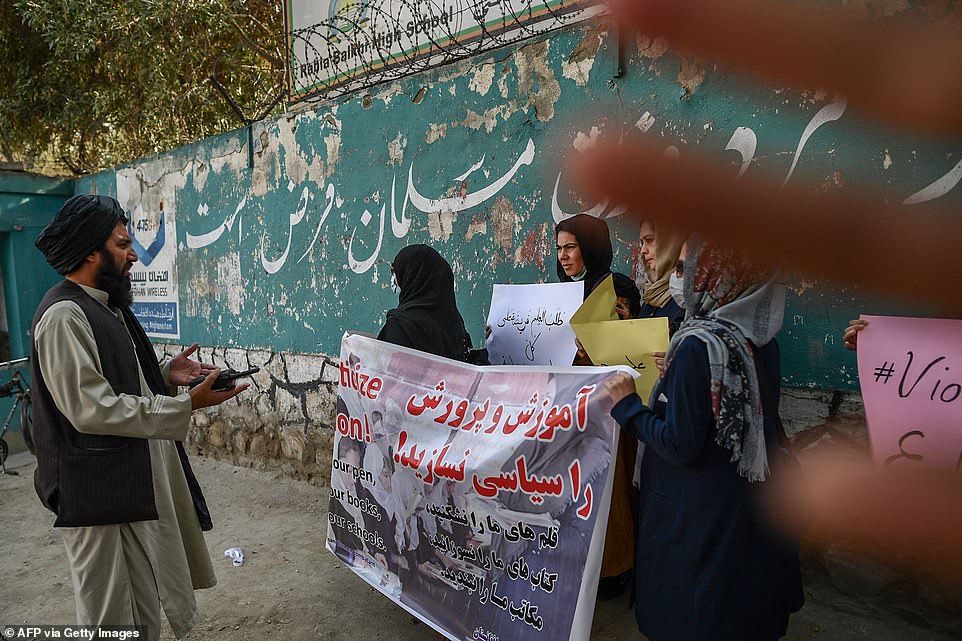 The women today unfurled a banner that read ‘Don’t break our pens, don’t burn our books, don’t close our schools’, before Taliban guards snatched it from them and tried to prevent journalists taking pictures 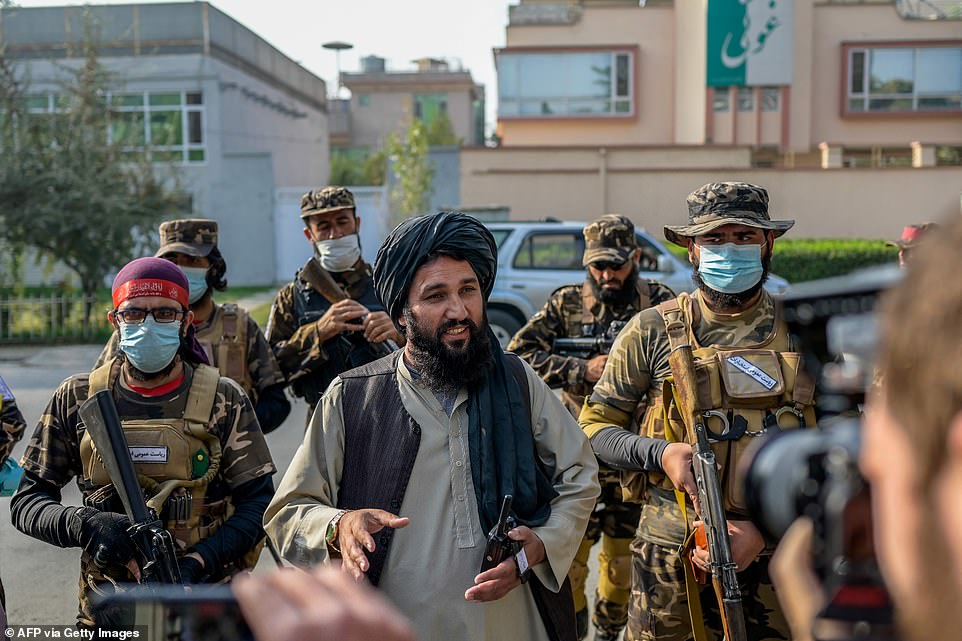 Taliban guard Mawlawi Nasratullah, who led the group and identified himself as the head of special forces in Kabul, said the demonstrators ‘did not coordinate with security authorities regarding their protest’ 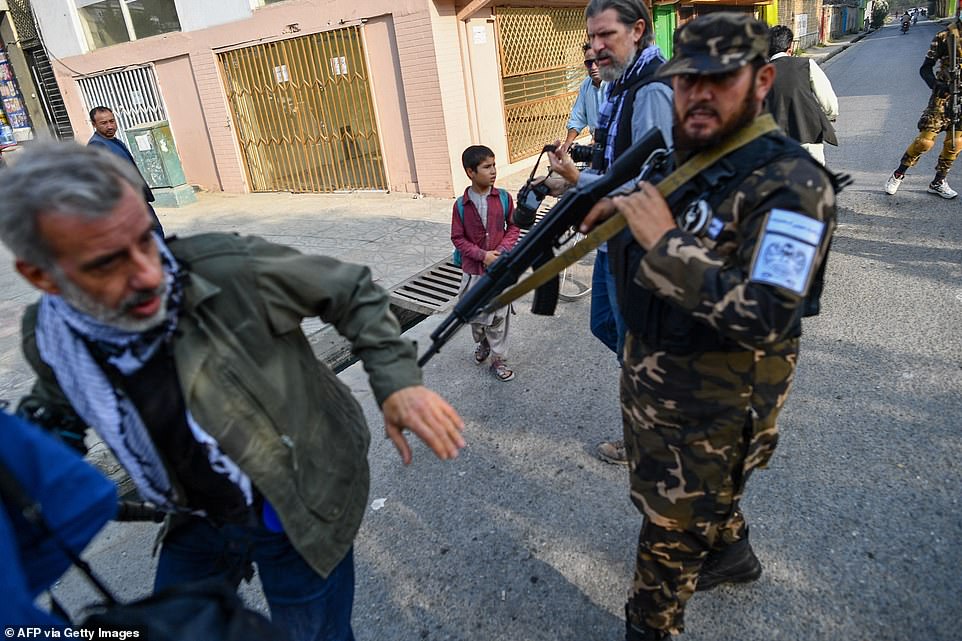 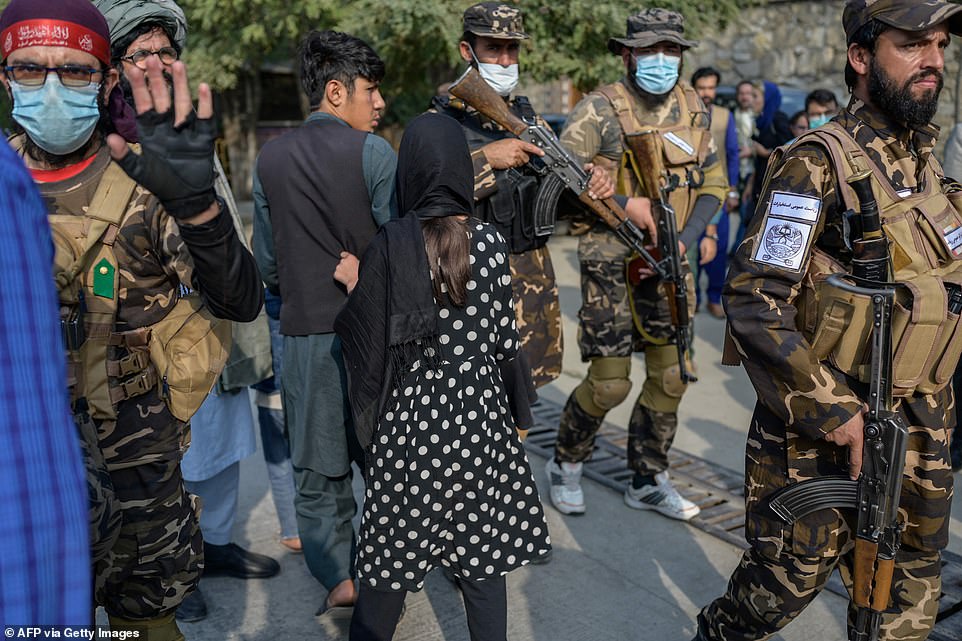 The Taliban’s war on women has begun with a ‘massive rollback of women’s rights’, according to Human Rights Watch (HRW).

The Islamist group, which took control of Afghanistan on August 15, has kerbed women’s rights in education, employment, freedom of movement, dress, gender-based violence, access to healthcare and sport, said Heather Barr from the women’s rights division of HRW.

She added: ‘While restricting access to education has been the most high profile abuse, discrimination is taking place systematically across women’s lives’.

Fighters had promised to respect women’s rights and impose a more moderate rule than they enforced in the 1990s, but any hopes those commitments would be honoured have quickly been scuppered.

Women have been barred from secondary schools and universities, and banned from playing sport.

But Barr said ‘even when women/girls are allowed to study or work many fear going outside & say they have to leave education or work because they cannot move safely.’

They have been barred from seeing male doctors and nurses, significantly reducing their access to health care, and the system in place to tackle gender-based violence has collapsed.

Women have also been excluded from government, which is all-male, and lost the Ministry of Women’s Affairs – replaced with the Ministry of Guidance and Call, better known as the morality police.

And though the policy has not been imposed nationwide, reports emerged last week of fighters in Herat refusing to let women leave the house without a male relative, a mahram, to accompany them.

It came weeks after the Islamists told women to stay home because new fighters who have not yet been trained ‘may mistreat women’.

Barr said the list of restrictions was growing, saying ‘there’s been bad news almost every day. And we’re ready to add positive news to this list to if there is any. But so far it’s been once thing after another’

‘I give you my words as chancellor of Kabul University,’ Ghairat wrote. ‘As long as a real Islamic environment is not provided for all, women will not be allowed to come to universities or work. Islam first.’

Around 9,460 women study at Kabul University, making up 43 per cent of the student body.

Women had been allowed to continue their university education following the Taliban takeover on August 15, provided they learned in segregated classrooms and covered themselves according the group’s interpretation of Sharia law.

But Ghairat said there were not enough female teachers for women to continue their studies within an ‘Islamic environment’, meaning lessons would be halted. He said plans were underway for male professors to teach women from behind screens.

Meanwhile the chancellor said the university, ranked 8,213rd globally, would aim to become ‘a hub for all real Muslims around the world to gather, research, study and islamicize the modern science.’

‘I am here to announce that we will be welcoming pro-Muslim scholars and students to benefit from a real Islamic environment at KU under the IEA.’

It was the latest sign the Taliban have no intention of imposing a softer brand of rule than the repressive reign in the 1990s, despite promising to do so in front of the international community last month.

Under the Taliban regime in the 1990s women were mostly banned from education and work and were not allowed to leave the house unless accompanied by a male relative.

Since a US-led invasion ousted the Taliban in 2001, significant progress has been made in girls’ education, with the number of schools tripling and female literacy nearly doubling to 30 per cent, though the change was largely limited to the cities.

Although still marginalised, Afghan women have fought for and gained basic rights in the past 20 years, becoming lawmakers, judges, pilots and police officers.

Hundreds of thousands have entered the workforce – a necessity in some cases as many women were widowed or now support invalid husbands as a result of decades of conflict.

The United Nations has said it is ‘deeply worried’ for the future of girls’ schooling following the Islamist’s takeover of Afghanistan and called on the group to allow female students and teachers to resume education.

Hundreds of women have taken to the streets to protest the Taliban crackdown on their rights but the demonstrations have been violently quashed by militants who have beaten female activists and fired shots in the air at rallies. 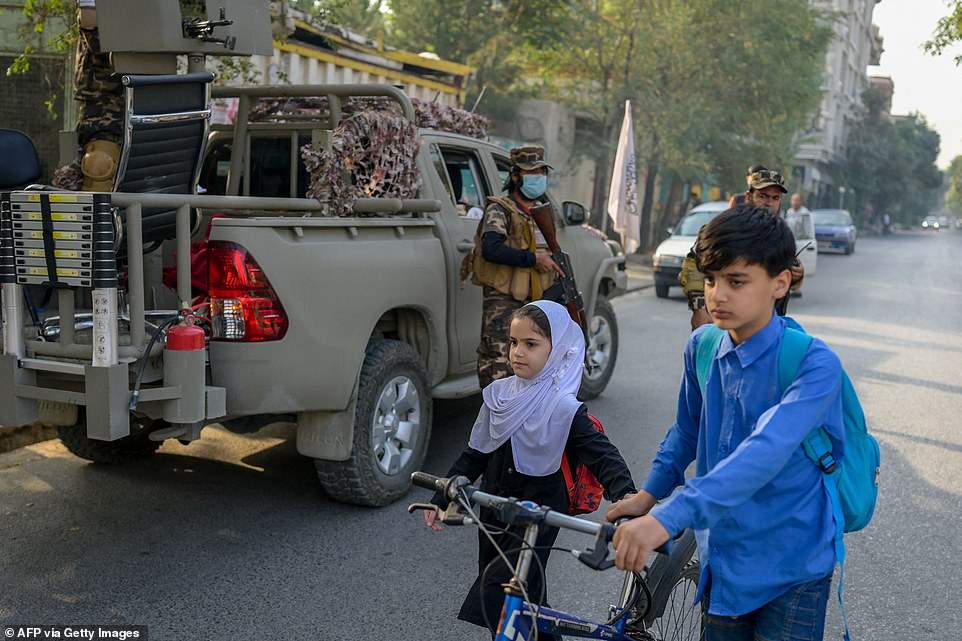 Both boys and girls of primary school age have been ordered back to education by the Taliban, but women continue to be excluded from secondary and higher education 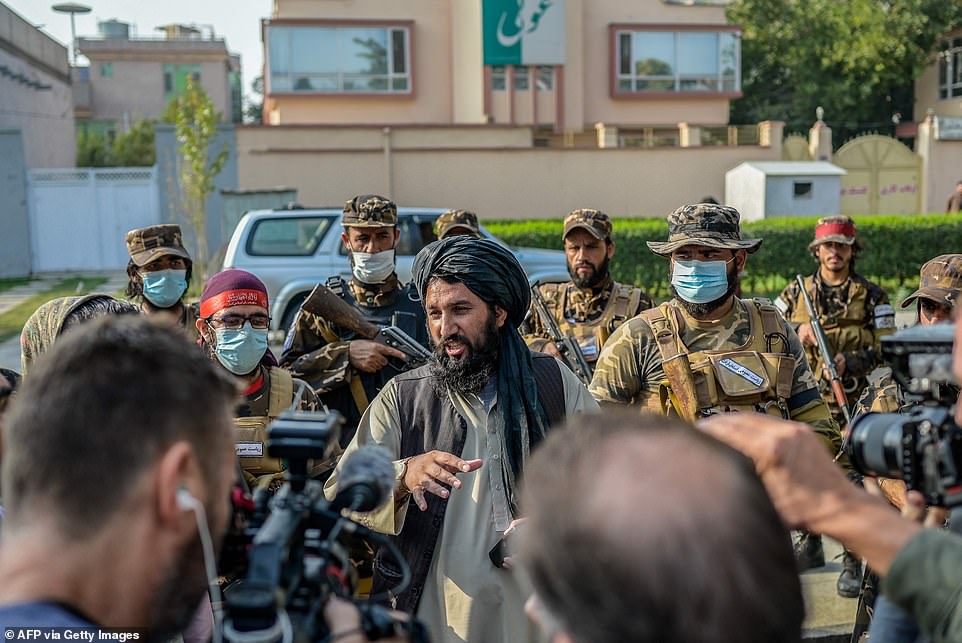 A Taliban commander tells journalists the militants forcibly dispersed the women’s protest because it violated state laws. ‘They have the right to protest in our country like every other country. But they must inform the security institutes before,’ he said