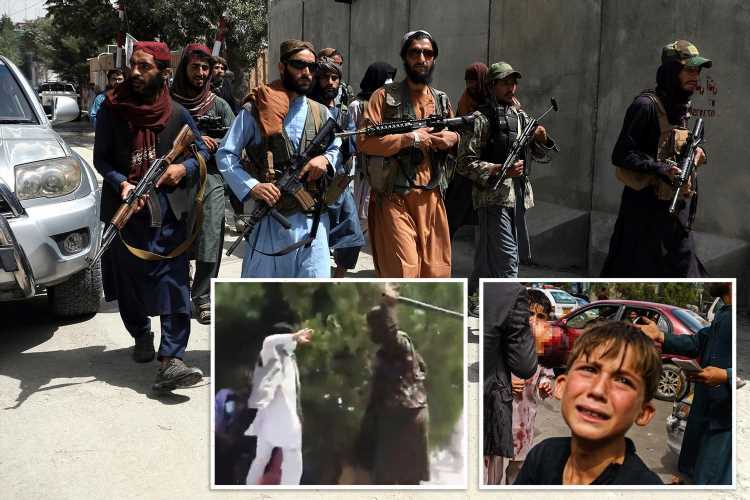 At least three people were killed and six were seriously injured when militants opened fire in the city of Jalalabad in eastern Afghanistan. 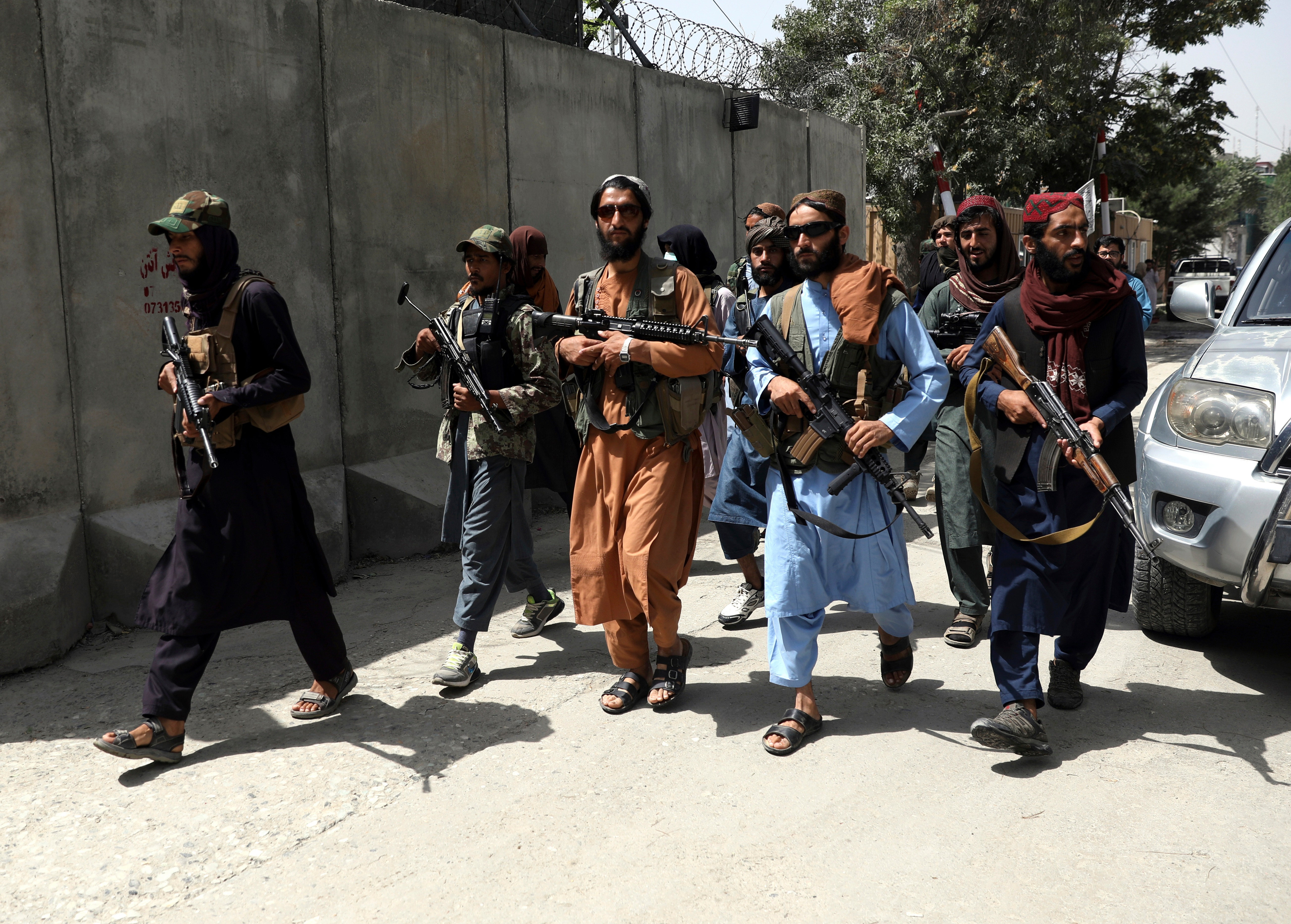 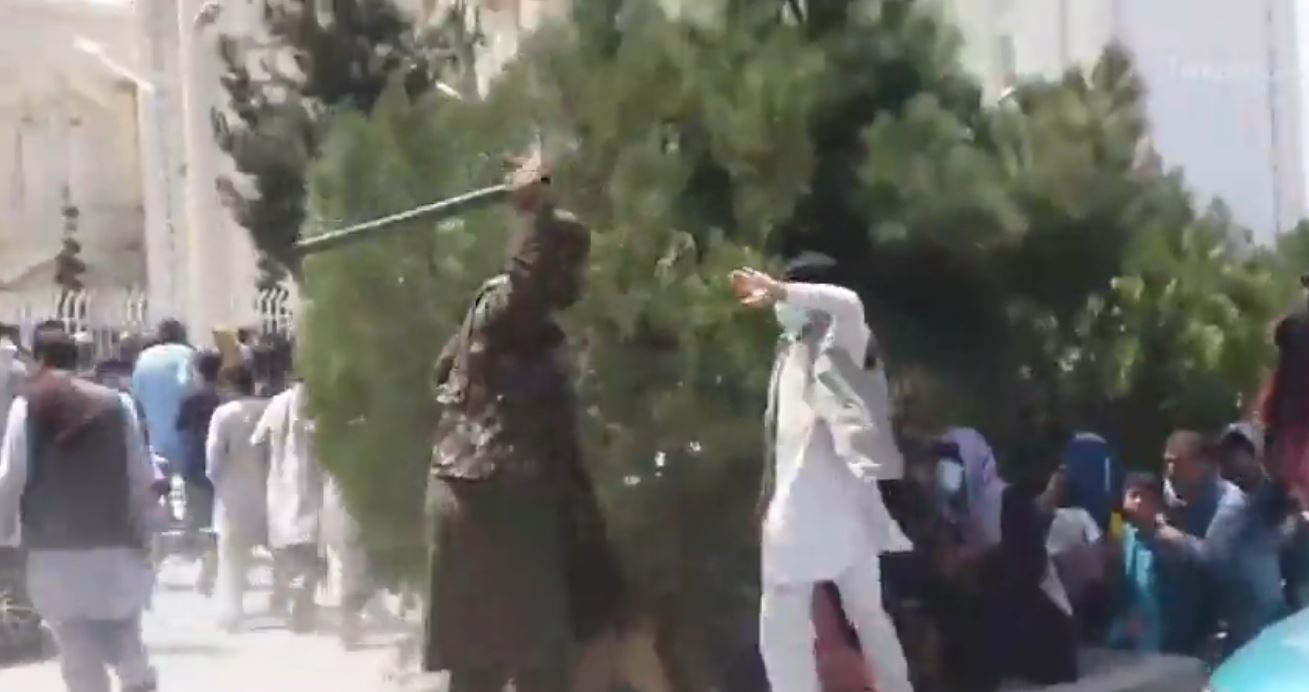 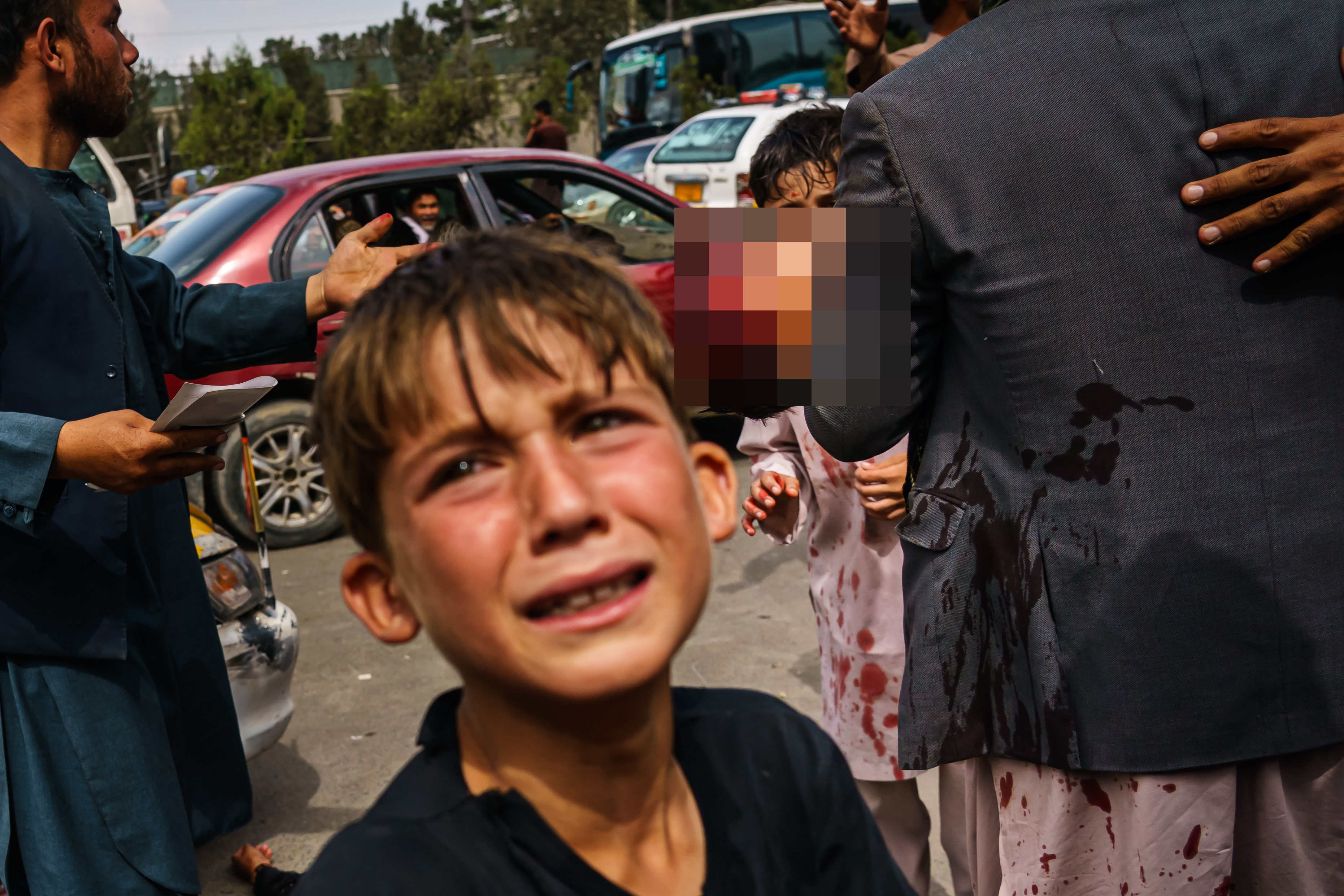 Protesters had poured onto the streets to demand the fanatics ditch their white flag and keep the country’s tricolour.

A journalist who raised the Afghan national flag in defiance was shot dead in cold blood by the jihadists, along with two other demonstrators.

In Kabul, the militants beat back crowds desperate to reach the capital’s airport, where thousands of people are being evacuated in US and UK airlifts.

Harrowing footage there showed children squashed against the airport perimeter begging to be let in while adults tried to pass babies over the fence.

Other footage from the capital showed an alleged car thief with his face covered in tar, tied to the back of a truck and his hands behind his back as people watched on helplessly.

The British ambassador Sir Laurie Bristow said around 700 people flew out in the emergency British airlift on Tuesday.

He added: “We are trying to scale up the speed and pace over the next couple of days. We will put everything we can on this, trying to get out everyone who we need to get to safety as soon as we can.”

Every available RAF cargo plane has been diverted to support the airlift mission — but planes are taking off half empty because British troops and diplomats do not have the capacity to process desperate visa applicants.

The UK has evacuated around 1,200 from Kabul so far — including 300 Brits and 900 Afghans resettled via the ARAP asylum scheme.

The Taliban’s spokesman Zabiullah Mujahid insisted the group had issued a blanket amnesty and would seek no revenge against their enemies.

He also said women could work if it was in accordance with Islam.

A resident in Kabul told The Sun: “We want to believe that the Taliban have changed. But we fear this is just the beginning.”

Flag protests also broke out in eastern Kunar and Khost provinces as the country prepares to mark the anniversary of its independence from the British today.

Exiled president Ashraf Ghani was accused of stealing £123million as he fled the country.

His man in Tajikistan — Ambasador Mohammad Zahir Aghbar — accused him of betrayal and vowed to report him to Interpol.

Mr Ghani, who fled to the UAE, said he risked being castrated and hanged by the Taliban if he stayed — like Communist President Najibullah in 1994.

Meanwhile, MPs have warned that brave Afghans fleeing the Taliban risk being “executed” if Britain waits years to give them refuge. They savaged Boris Johnson for only taking 5,000 this year.

He has offered sanctuary to 20,000 over five years.

But MPs from all sides urged the PM to make the resettlement scheme as generous as possible.

Labour MP Chris Bryant raged: “What are the 15,000 to do? Hang around and wait until they’ve been executed?”

Tory MP Alicia Kearns suggested a scheme that allowed Brits to open their homes to people fleeing the Taliban.

She said: “I call for the Government to consider creating an initiative that allows British nationals to open their homes, their spare bedrooms, their second homes, to these Afghans, similar to the private sponsorship route that already exists, because the British people want to step up and help.”

He added: “The scheme must be far more ambitious, generous, and swift to help the Afghan citizens that it has abandoned and left at serious risk of persecution, and indeed death.”

Mother of the House Harriet Harman added ministers need to make “a realistic and generous assessment of the scale of the need and to work with all local authorities that want to play their part in giving a warm welcome to those who are fleeing”.

Tory Johnny Mercer described it as “a good start.” But he warned: “The reality is — this is basic maths — that we will not get out of Afghanistan all those whom we promised to get out.”

British citizens who fled this week say they feel “immensely lucky” to have escaped as Afghan families still strive to find a way out after the Taliban takeover.

She had been working in the capital since September 2020 with Afghanaid, a UK-registered charity that champions women’s rights and provides clean water and sanitation.

She said: “As we drove there at 4am, the runways were crowded with hundreds of Afghan families hoping to get out somehow. I’m very aware how immensely lucky I was to get helped out of the country.”

She added: “The real tragedy is being in touch with Afghan colleagues and friends, for whom the chances of leaving the country are far, far smaller, and who have so much more to lose.” 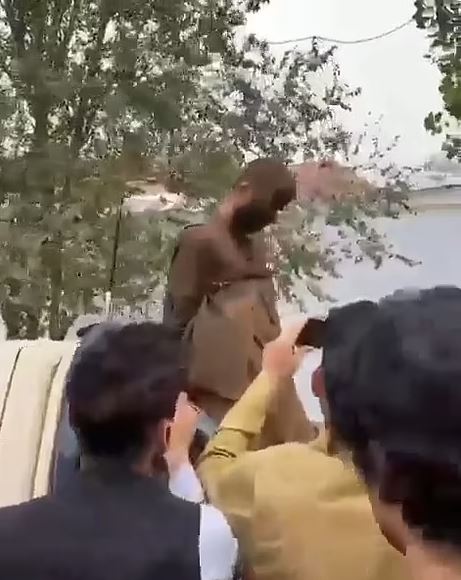 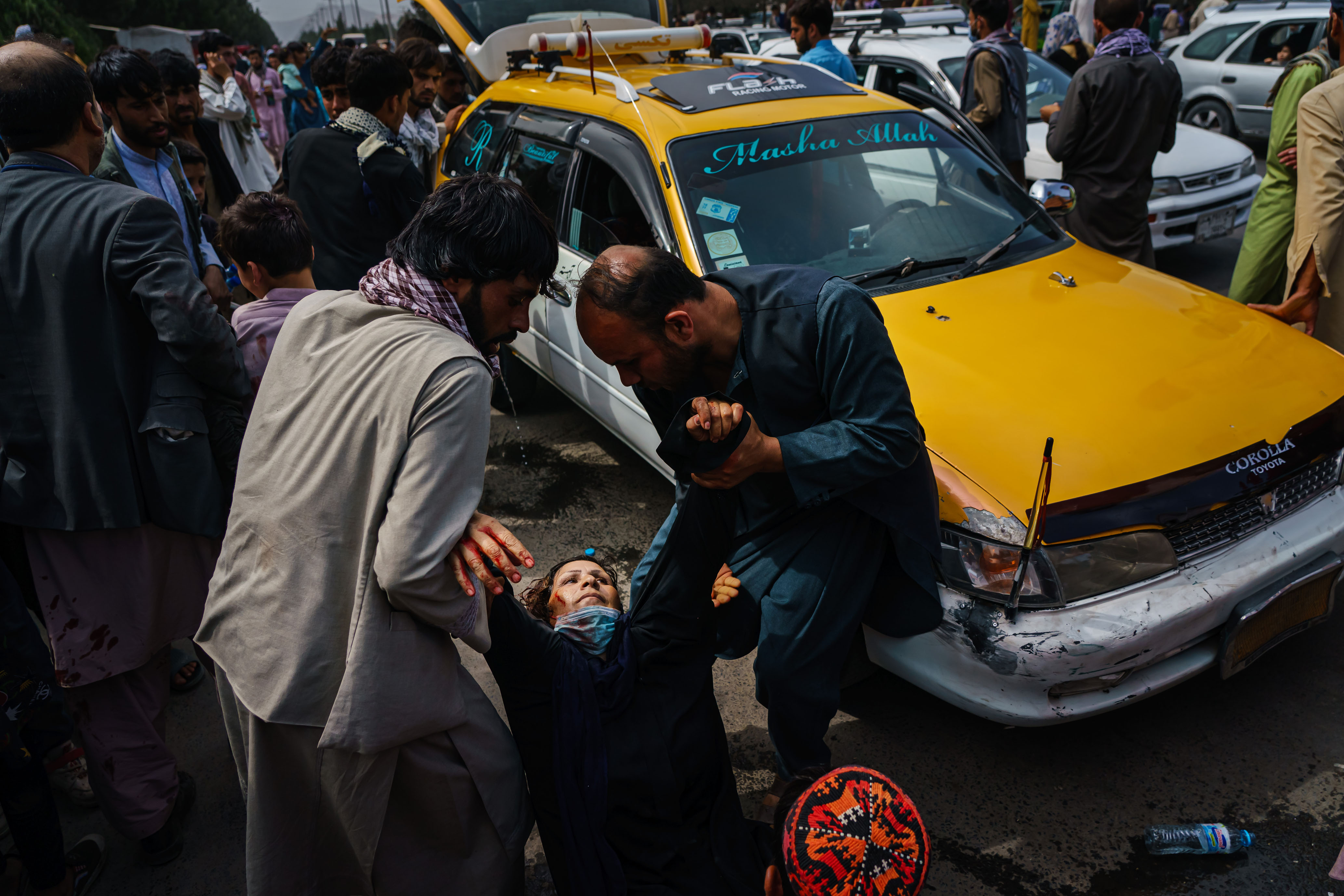 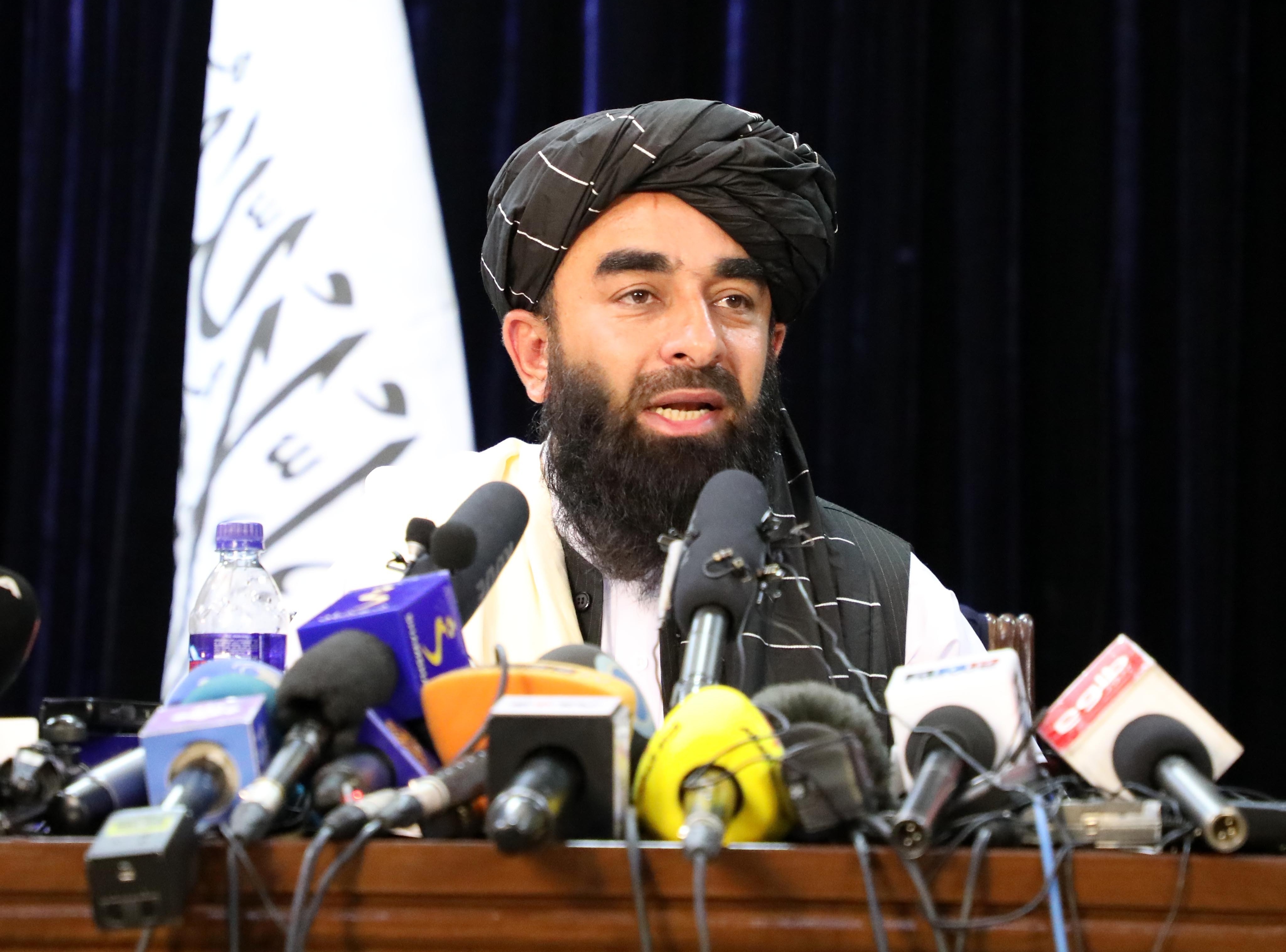 The US decision to cut and run shattered the Afghan army’s morale and led to its collapse, General Sir Nick Carter, right, fumed.

He said frontline troops felt deserted after years of fighting bravely — and he rebuked the US President for claiming Afghan troops were cowards.

“The exit of US forces and particularly US air power came as a significant shock and I don’t think any of us realised the extent to which that undermined their morale.” The Taliban swept to power in a ten-day advance.

As the country plunged into chaos President Biden accused brave Afghan soldiers for lacking the will to fight.

But in a stark rebuke, Gen Carter responded: “One has to be careful about saying they simply didn’t fight.

“One has to look back on how well they fought between 2014 and April of this year.”