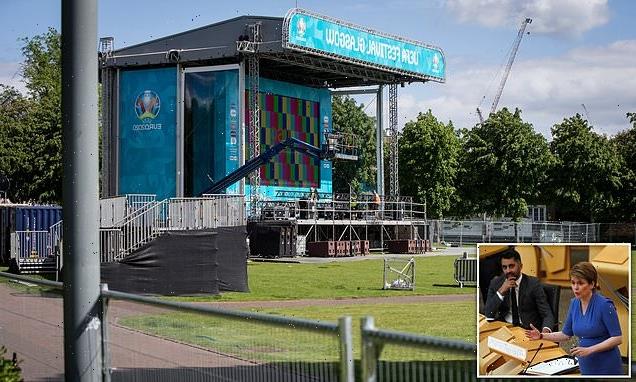 Nicola Sturgeon slammed for allowing up to SIX THOUSAND Scotland supporters PER DAY to congregate in European Championship ‘fanzone’ in Glasgow while pubs, restaurants and weddings face Covid restrictions on numbers

Nicola Sturgeon was blasted today over plans for a 6,000-capacity ‘fanzone’ for the European Championship being set up in Glasgow while the city is under heavier Covid restrictions than the rest of the country.

A final decision was expected this week on whether the month-long facility in Glasgow Green will be permitted, but a senior Scottish minister described it as if it was going to go ahead.

Health Secretary Humza Yousaf said he believed the fanzone would be a ‘low risk event’.

But the decision has been slammed by the Scottish Tories who want to know why it is being allowed when many businesses are still hindered by lockdown rules.

The city, along with much of the central belt, remains in a Level 2 lockdown that  limits social gatherings in pubs and restaurants to a maximum of eight adults from three households indoors, and limits weddings to 50 socially distanced guests.

Douglas Ross, the Tory leader in Scotland, accused Ms Sturgeon of overlooking ‘contradictory’ rules that are in place, after she gave a Covid statement to MSPs in Holyrood.

‘The First Minister’s statement was telling for what it missed out and who it ignored,’ he said.

‘It had nothing, not a single shred of new information, for soft play centres, hospitality businesses, couples waiting to get married or parents hoping to see their young children graduate from nursery. 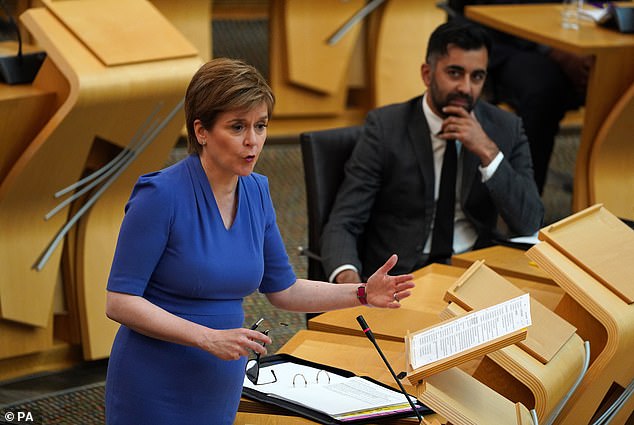 The decision has been slammed by the Scottish Tories because the city, along with much of the central belt, remains in a Level 2 lockdown. 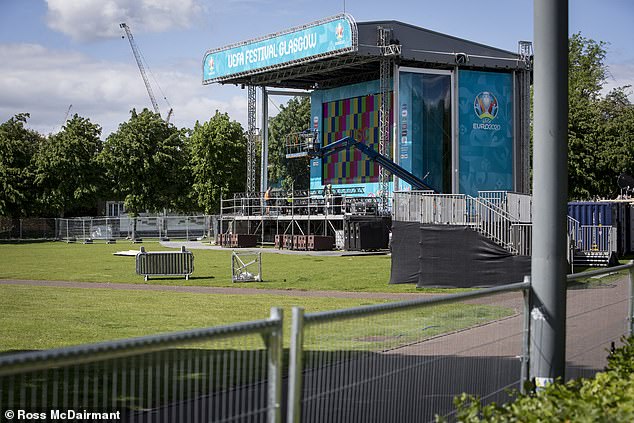 A final decision was expected this week on whether the month-long facility in Glasgow Green will be permitted, but a senior Scottish minister described it as if it was going to go ahead. 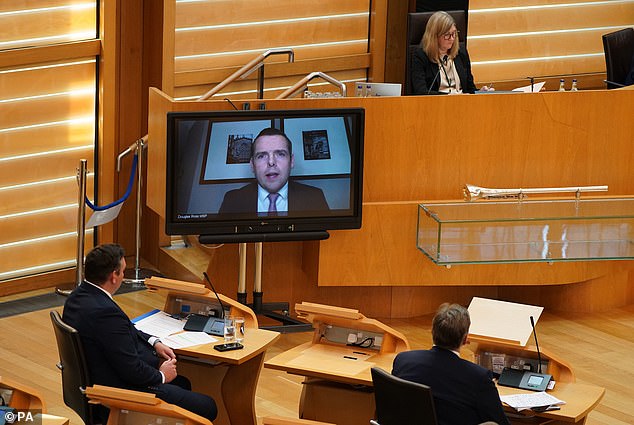 Douglas Ross, the Tory leader in Scotland, accused Ms Sturgeon of overlooking ‘contradictory’ rules that are in place, after she gave a Covid statement to MSPs in Holyrood.

The Scottish Government is drawing up plans to vaccinate children aged between 12 and 15, Nicola Sturgeon has said, with ministers now waiting on expert approval before starting to give the jags to youngsters.

The First Minister pledged to move as ‘quickly as practically possible’ if the Joint Committee on Vaccination and Immunisation (JCVI) gives the go-ahead for immunising children in this age group.

But she could not commit to calls from Scottish Labour leader Anas Sarwar for all adults aged 40 and above to have been given both doses of the Covid-19 vaccine – and for younger adults to have had at least their first jag – by the end of June.

A decision on the next phase of easing will be made on June 21, Ms Sturgeon confirmed. But pressed by Mr Sarwar on the need to ‘accelerate the response’ to coronavirus, the First Minister said vaccinations were being done ‘as quickly as our supplies allow’.

She said: ‘I would love us to be doing more, but the constraining factor is the supply.’

Her comments came as she revealed the Scottish Government was ‘already doing the planning to extend the vaccination programme to children over 12, should the JCVI recommend that’.

Last week, the Medicines and Healthcare products Regulatory Agency approved the Pfizer/BioNTech vaccine for ages 12 to 15.

‘The First Minister said herself that there are ”apparent anomalies” in the rules – but she didn’t signal any intent to fix the deep frustrations those anomalies are causing.

‘There are no easy solutions but the public deserve better than being told to just put up with contradictory rules.’

A final decision was expected this week, but in response to a question in Holyrood, Health Secretary Humza Yousaf today spoke of the fan zone as though it was going ahead, but said it could be brought to a halt if there are worries about transmission of the virus.

The Scottish Government has said there will not be mandatory testing in place at the event, despite the concerns of leading public health officials such as Professor Linda Bauld, the chair of public health at Edinburgh University.

Mr Yousaf said: ‘I understand the concerns that some have expressed, especially in light of the hard sacrifices everyone has made.

‘The proposal for a fan zone is not about prioritising football over other priorities, it’s about seeking to cater in as safe a way as possible for fans who want to watch the matches.’

Mr Yousaf also said, in response to a question from Lib Dem health spokesman Alex Cole-Hamilton, that he considered the fan zone to be a ‘low risk event’.

He added: ‘I want to make it clear that the situation with the virus, the application of necessary mitigations and the actual experience of the event will be monitored on an ongoing basis.

‘Any changes considered necessary will be made, up to and including withdrawing permission, should significant concerns arise.’

Mr Yousaf said he would encourage every attendee to use a lateral flow test before they visit the fan zone, adding that Glasgow City Council will contact every ticket holder doing the same while providing a link to order tests from the Government.

‘I would encourage every single person that has a ticket to any session of the fan zone to please test before arrival,’ he said.

Euro 2020 is being played at venues across Europe this year after being postponed last year because of the coronavirus pandemic.