James Campbell, 31, who lived with his mum in Paisley, admitted the sex attack on the woman on August 16 last year. 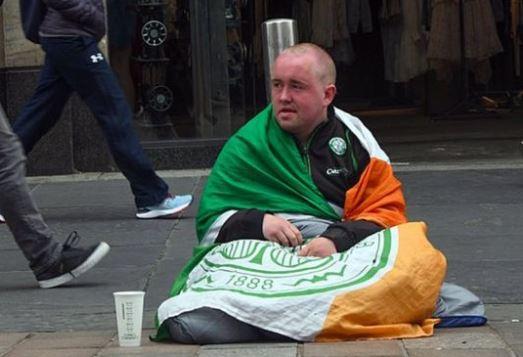 The victim had spotted Campbell topless on Glasgow's Buchanan Street despite the fact it was cold and raining.

She spoke to him for about 10 minutes to check on his welfare but he then followed her and refused to go away.

The High Court in Glasgow heard Campbell demanded a kiss before restraining and raping her in a lane between West Nile Street and Nelson Mandela Place around 6.30pm.

Campbell was dressed in Celtic FC colours and was often seen begging while clutching an Irish tricolour.

Angela Gray, prosecuting, said: "He told the woman. 'I love you. I want you to be my girlfriend.'

The court heard the woman struggled with Campbell and repeatedly told him: "Please don't" and "There is no need for this."

Miss Gray added: "She repeatedly told him to stop and that he was hurting her.

"He did not stop and told her to shut up.

"A solicitor working in an office overlooking the lane saw the incident taking place and phoned the police."

Cops arrived to find Campbell raping the woman and dragged him off her.

He had fresh scratch marks on his outer thighs and the woman was visibly shaken and upset.

The sex attack was captured on CCTV and was described by Miss Gray as "graphic".

Campbell told police: "She wanted rough sex so I gave it to her."

Judge Lady Stacey placed Campbell, who has been in custody since, on the sex offenders register.

She told him: "In light of the seriousness of the crime and your fairly extensive previous convictions I will see if an extended sentence is required."

Sentenced was deferred on Campbell until March to obtain background reports.