Strasbourg, France: Cherif Chekatt, the suspect in the Strasbourg shooting, remains at large with hundreds of police and soldiers seeking him in a massive manhunt.

The fugitive Strasbourg man suspected of shooting and knifing people at the French city's Christmas market has more than two dozen prior convictions and turned radical Islamist in jail, officials say. 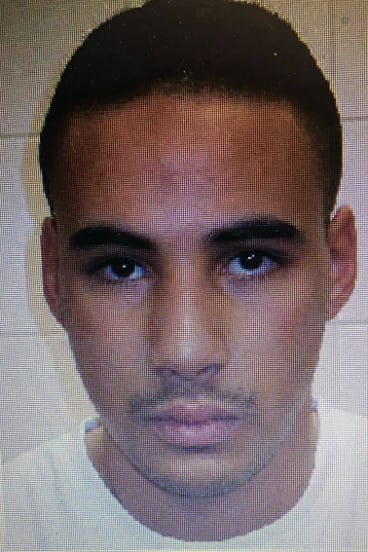 This undated handout photo provided by the French police, shows Cherif Chekatt, the suspect in the shooting in Strasbourg, France.Credit:AP

The rare times he's been out of jail, he's moved around. He had lived at his latest apartment, in a grim housing bloc on the edge of Strasbourg, for just a few months before police broke down the door in an unrelated case.

But Chekatt wasn't home on Tuesday morning when the police arrived at the fifth- floor flat overlooking a pair of smokestacks and flat-topped houses in the distance.

Further in the distance, barely visible, is downtown Strasbourg, where that evening he allegedly shouted "God is Great" in Arabic amid gunfire and shootouts with police in northeastern Strasbourg that left two dead, one person brain dead and 12 others injured.

Hundreds of officers fanned out Wednesday in a massive manhunt, hoping to put him behind bars yet again.

Police had been trailing Chekatt, a Strasbourg native and one of six siblings who was "well known" to authorities: He had 27 convictions in his criminal record, said Paris prosecutor Remy Heitz. Chekatt was also tracked by the domestic counterintelligence service, DGSI – France's equivalent of the FBI. 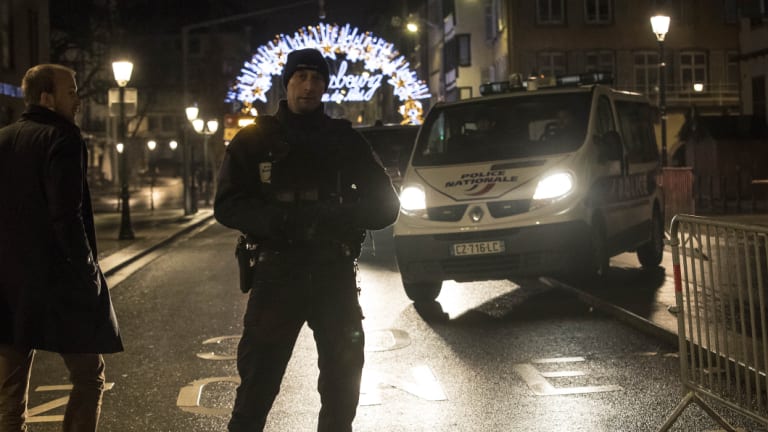 Emergency services patrol at the centre of the city of Strasbourg following a shooting, eastern France.Credit:AP

The Associated Press obtained two police photos of him, one when he appeared to be an adolescent, a sparse moustache on his upper lip, and a more recent one with a fuller moustache and beard, dark circles around his eyes.

Authorities say he was flagged for Islamic extremism in prison in 2015 and put on the "Fiche S" radical watch list then. It's a profile familiar to many in European security, and has hit France particularly hard – that of a petty criminal who fuses a life of violence with Islamic extremism. 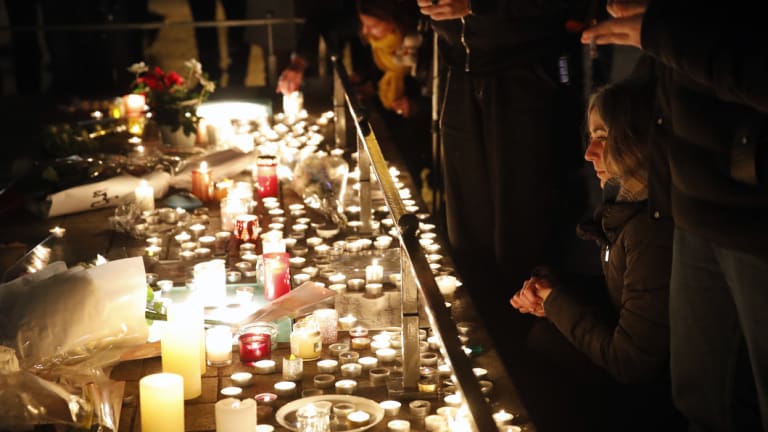 The 2016 court verdict in the southern German city of Singen, obtained by the AP, said he was sentenced to prison in France in 2008 and in Basel, Switzerland, in 2013 for various robberies. News agency dpa reported that he was deported to France in 2017.

The verdict said Chekatt had worked for local authorities after leaving school, and had been unemployed since 2011. He had spent a total of four years in prison. The German robberies took place in Mainz, near Frankfurt, in 2012 and in Engen, near the Swiss border, in 2016.

Police on Wednesday were guarding a building in the outer area of Strasbourg where Chekatt had lived since earlier this year, neighbours said.

A neighbour, who asked not to be named as the gunman is still at large, said he was rarely home. She said she last saw him Monday from her window, which looks out on a common hallway, and he was with another man, much older than he.

Young men from the apartment block said they knew him as someone who seemed destabilised by his time in prison. "You can just tell," said one, lightly touching the side of his head. They, too, feared being publicly named because the gunman is still being hunted by police.

His apartment is in a housing project considered a "sensitive zone" by French police, just three kilometres from the Christmas market but seemingly a world away from its glittering boutiques and tidy streets.

Each door in the building is marked with the resident's name; the suspect's apartment, on the fifth floor, bears a white paper reading "Chekatt C." The other names reflected the ethnic mix of the neighbourhood: French, German, Russian and Arabic.

The lock was broken and the shutters were closed. Several neighbours said they heard the police break in, but the atmosphere Wednesday was unusually calm after the overnight drama.