Sacré Bleu! Storm Etienne brings up to two inches of rain to Britain TODAY before 80mph winds hit on Friday amid ‘danger to life’ warning

Britain faces a double whammy of severe weather over the next 48 hours as Storm Etienne hits the country.

The storm could bring up to two inches of rain over parts of Wales today before a second system sweeps over much of Scotland on Friday – causing a Met Office ‘danger to life’ warning and wind gusts of up to 80mph.

Today, Wales could face heavy downpours, with flooding possible for homes and businesses in the worst-hit areas as Storm Etienne – originally named by the Portuguese Met Office for the Azores – passes over the UK.

Areas affected include Pembrokeshire, Carmarthenshire, Ceredigion, Powys and Swansea, with up to two inches of rain falling in some hilly locations. Natural Resources Wales has also issued three flood alerts. 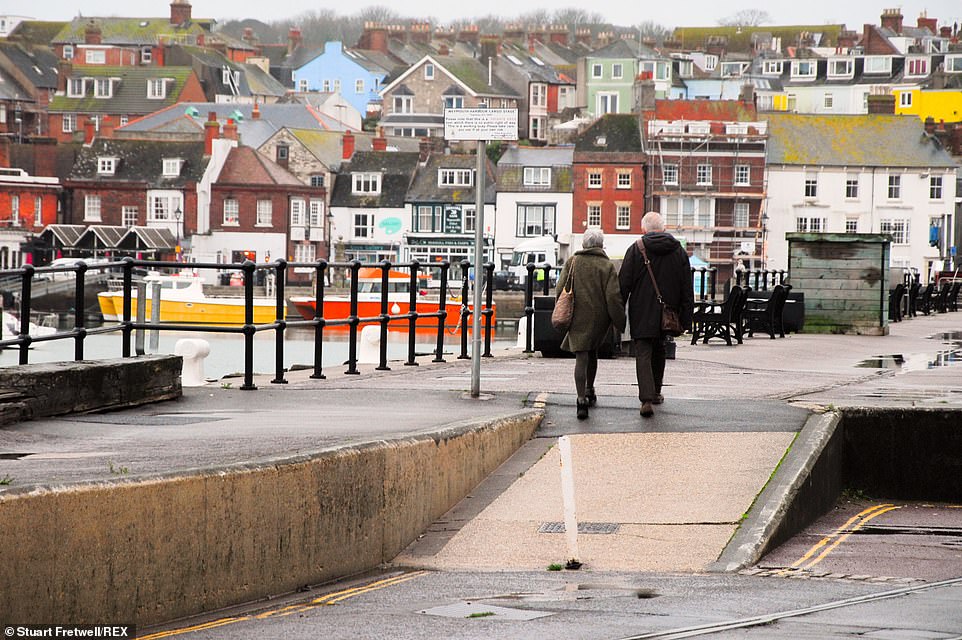 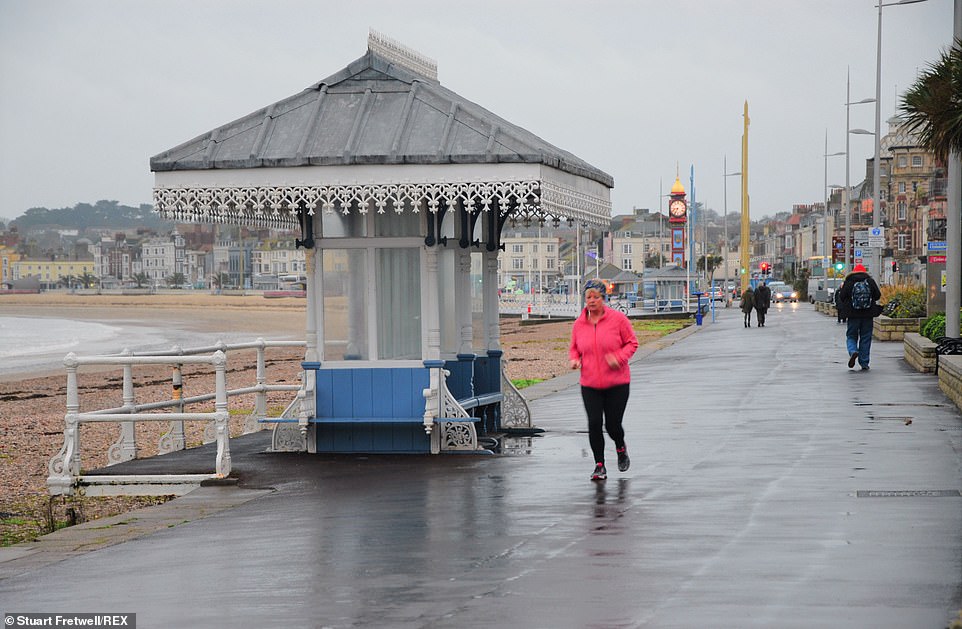 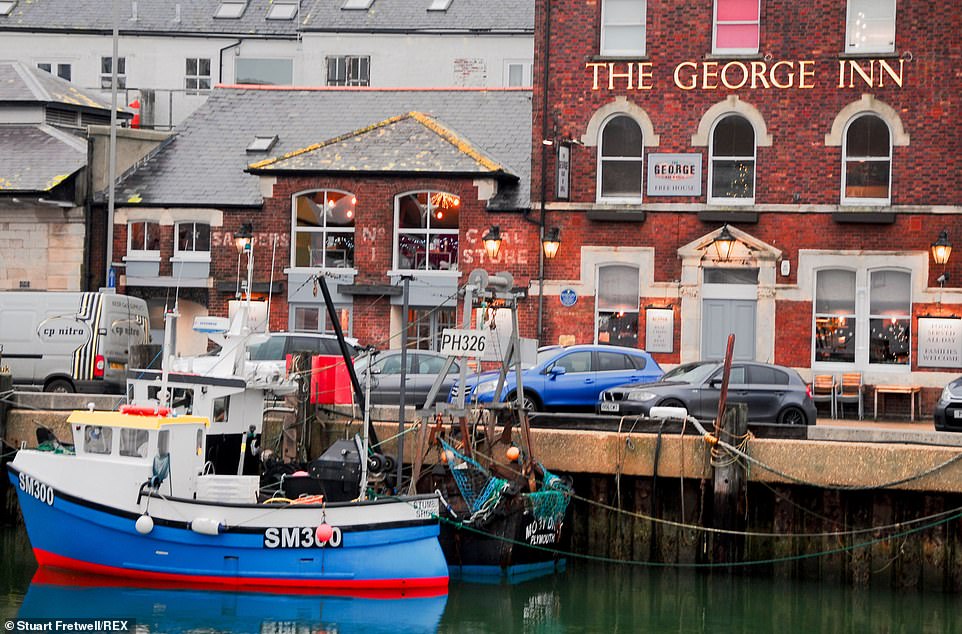 By Friday, hurricane force gusts of up to 80mph are expected in exposed areas across the north of England, Scotland and Northern Ireland on Friday, with maximum speeds of 60mph to 70mph inland and at lower levels.

The Met Office has issued a warning for an area extending as far south as Liverpool, Manchester, Leeds and Hull. Even further south, gusts of up to 50mph are expected around coastal areas of Wales and South West England.

Gusts of up to 40mph – still gale force – are expected inland in the Midlands and parts of the South. The warning states: ‘There is a slight chance of some damage to buildings, such as tiles blown from roofs.

‘There is a small chance that injuries and danger to life could occur from flying debris, as well as large waves and beach material being thrown onto sea fronts, coastal roads and properties. Power cuts may occur.’

Large-scale transport disruption is also predicted. The warning has been issued less than a week since killer Storm Diana brought severe gales gusting up to 89mph last Thursday.

The conditions claimed the life of a 75-year-old woman, who died when a tree fell onto a car she was a passenger in, at Compton Chamberlayne, near Salisbury, Wiltshire. 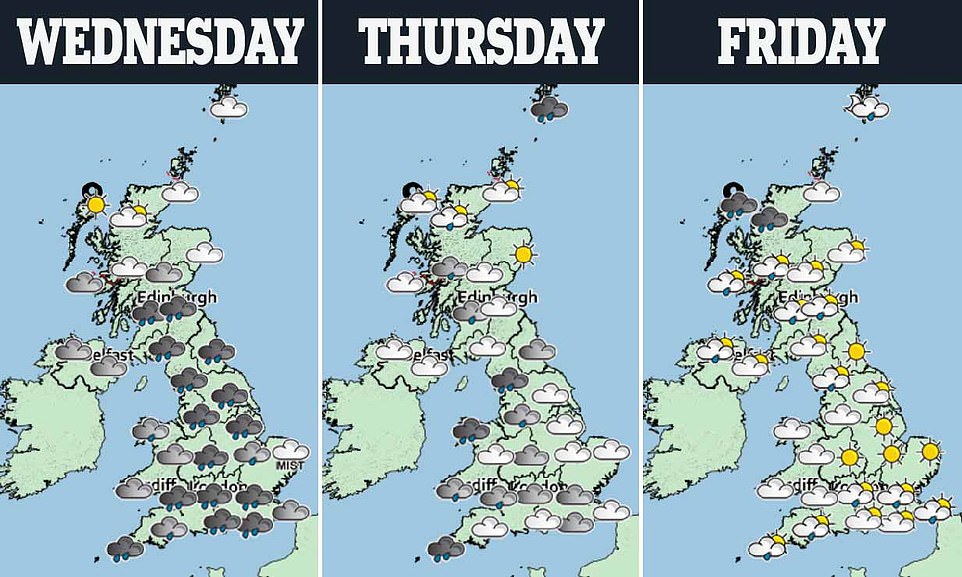 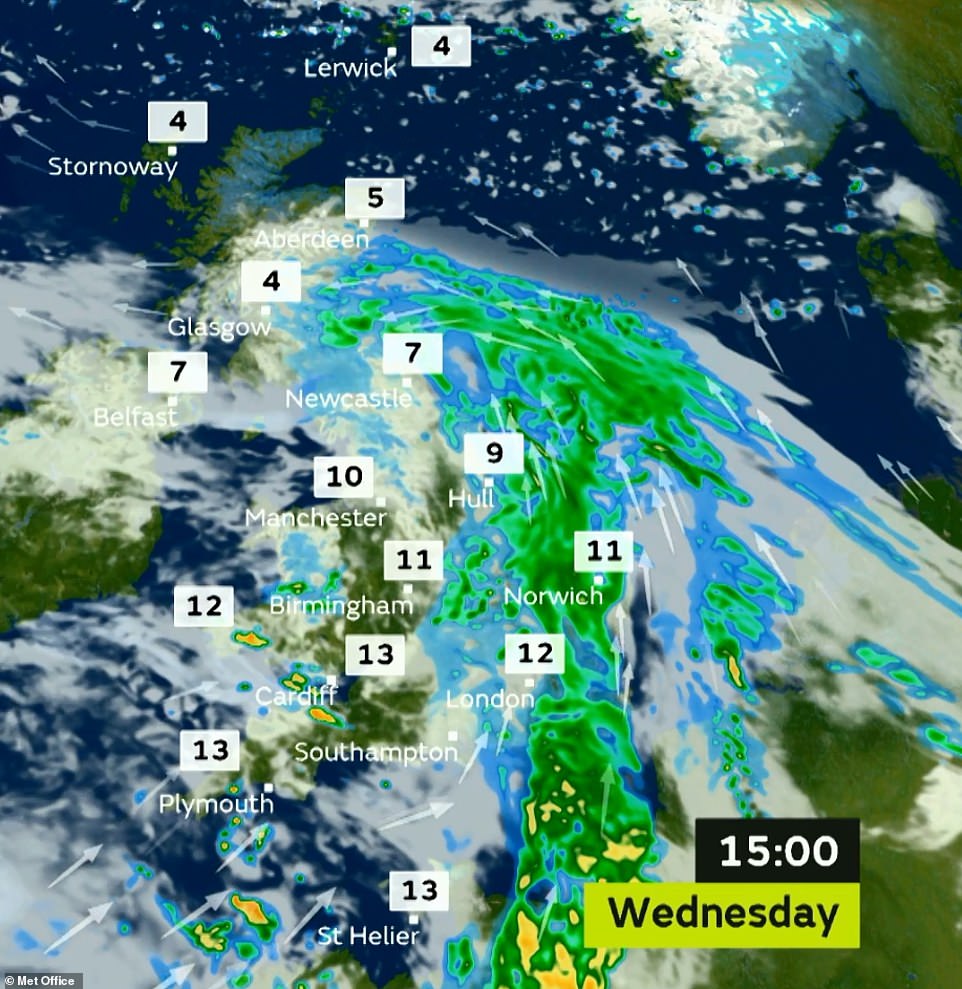 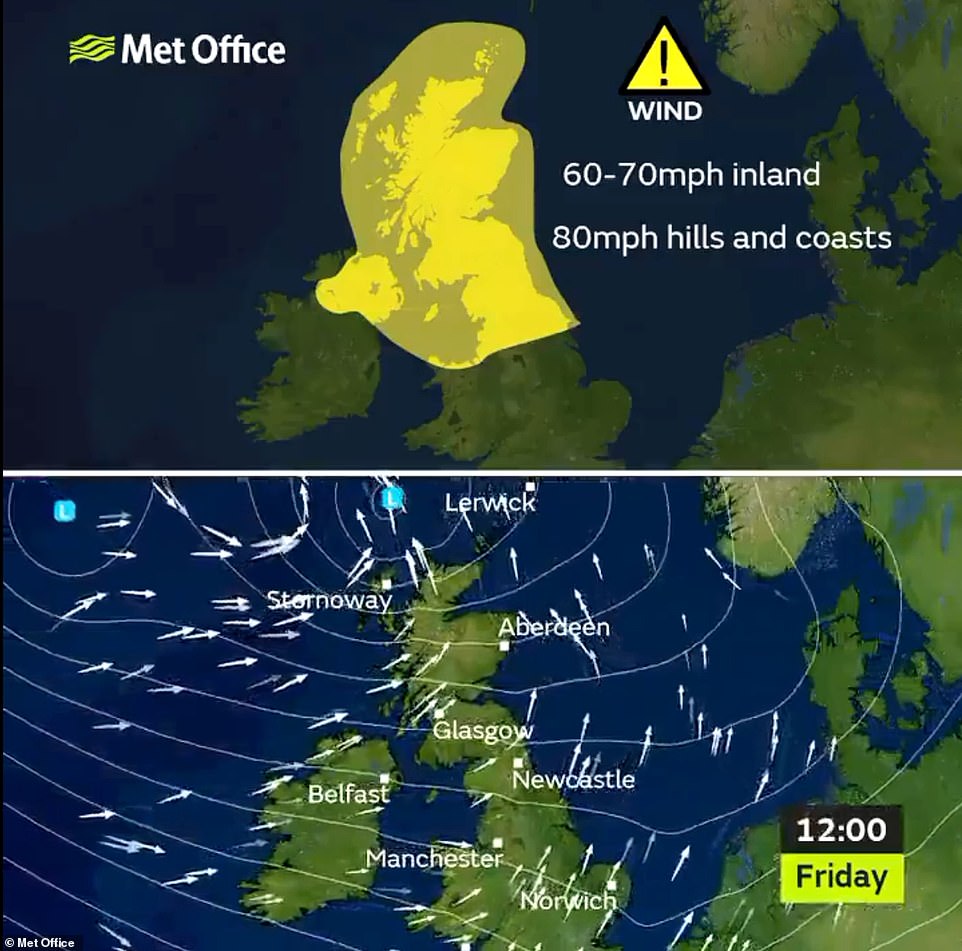 A Met Office wind warning has been issued for Scotland and Northern England this Friday, running from 3am until midnight 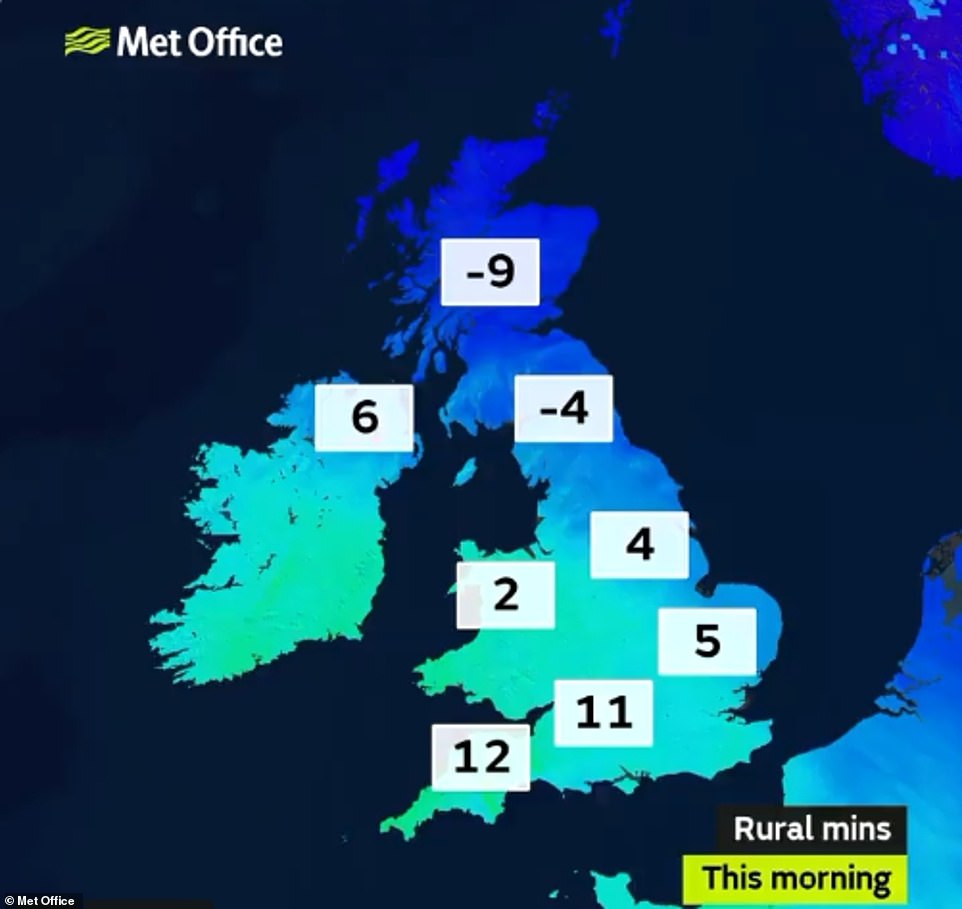 Temperatures fell to -8.8C overnight at Braemar in Aberdeenshire today, making it the UK’s coldest night of the winter so far

The latest gales are expected between 3am and midnight on Friday, when a deep area of low pressure hits the country. The weather system has not yet been designated a named storm – but is likely to be called Storm Deirdre.

The forecast for today, tomorrow and Friday

As well as Storm Diana, also named by Portuguese forecasters, there have been three earlier storms named by British and Irish meteorologists – Ali and Bronagh in September, and Callum in October. Last year, there were four named storms in the autumn-winter season up to early December.

Becky Mitchell, a Met Office forecaster, said: ‘We have issued a yellow weather warning for most of Friday due to strong winds associated with an area of low pressure.

‘Scotland is going to see the strongest of the winds but they will also affect Northern England and Northern Ireland. Further south, outside the warning area, there could also be some strong gusts.’

Miss Mitchell said the winds will at first be accompanied by a band of heavy rain crossing the country overnight tomorrow into Friday morning, lingering in eastern areas. In its wake, blustery showers are expected across England and Wales for the rest of Friday.

Showers and drizzle are expected tomorrow, preceding Friday’s gales. More showers – interspersed with sunny spells – are forecast over the weekend, but temperatures are set to be cooler, falling to 9C (48F) in the North and 12C (54F) in the South.

Further strong winds are expected in the North East and South West on Sunday. But into next week, forecasters predict ‘some prolonged drier, settled but cold spells’, with possible overnight fog and frost, ‘especially for the south and east’.

Snow and wintry showers are also possible in the North and West, and along the east coast. Later in the month, milder and unsettled weather could return, with the chance of heavy rain and gales over the Christmas period.

For Brazilian director Vladimir Seixas the sun is rising anew for filmmakers in his country after the end of years...