Rush hour commuters were enlisted to get a tram on the move again, by pushing it back into place after it was unable to move.

Several passengers on the platform at Brooklands tram stop in Sale were filmed pushing the side of a stationary tram which was full of people. 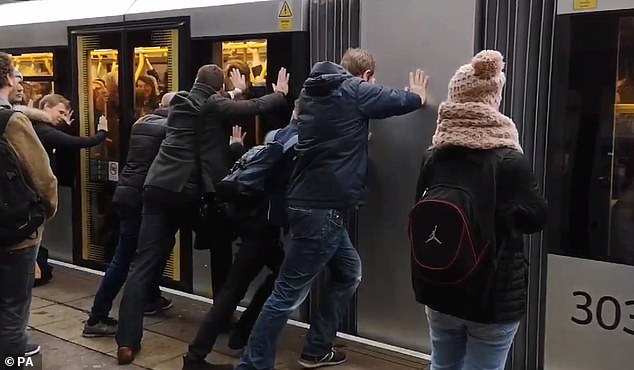 Passengers at the station in Sale, Greater Manchester, were filmed pushing the tram

Passengers on the crowded platform were seen looking around and laughing to one another following the incident.

They stopped after a member of staff said ‘thank you very much everyone’ over a public address system.

One passenger, who asked not to be named, said the tram was stuck at the stop for about five minutes.

He told the Press Association that the problem with the ‘very busy tram’ started when the driver struggled to shut the doors.

‘When they finally shut he couldn’t get the tram going, so he called over the tannoy for people to push the train so it started.

‘I thought it was nice (of) people help, but also kind of sad that this is our transport system. I don’t want the driver to get in trouble.’ 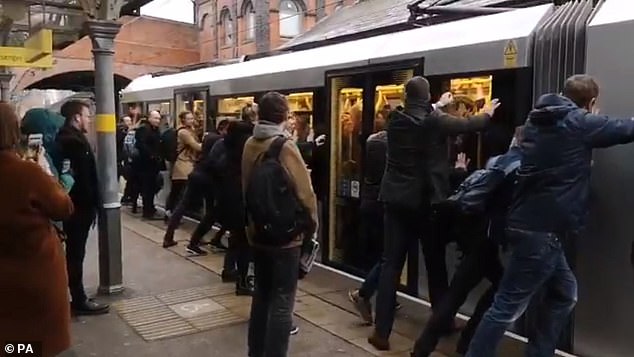 He said the pushing lasted for about 10 seconds.

‘I feel for the drivers,’ he added. ‘It’s a pretty badly run service.’

The video had been tweeted this morning by ‘JB’ who said: ‘Passengers at Brooklands this morning being asked to push the tram to one side to help get it going. #WeDoThingsDifferentlyHere’ 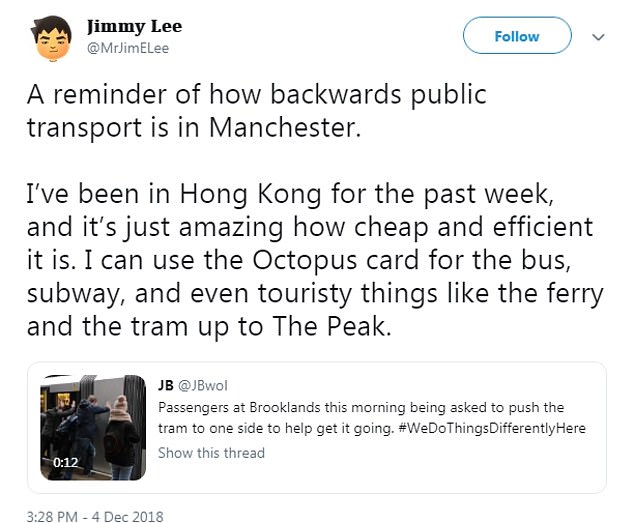 Responding to the video, one Twitter user said public transport in Manchester was ‘backwards’

‘I’ve been in Hong Kong for the past week, and it’s just amazing how cheap and efficient it is. I can use the Octopus card for the bus, subway, and even touristy things like the ferry and the tram up to The Peak.’

This is while another user, tweeted her thanks to fellow passengers who had helped get the tram on the move.

Sophie A Fox said: ‘I was on this tram! Thanks to the people on the platform for the push! #manchester.’ 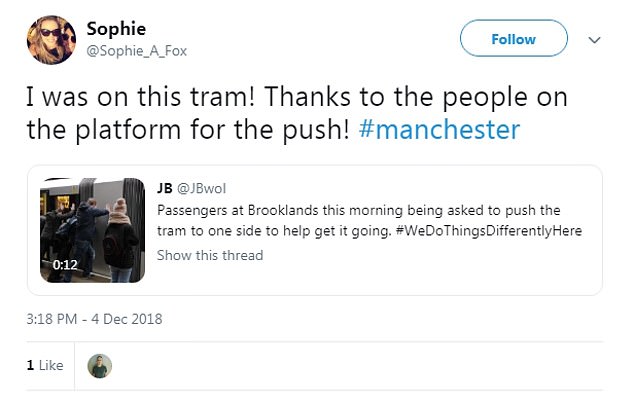