Fishermen are spotted driving down a highway with a 2.4-metre SHARK hanging out the back of their vehicle

A huge 2.4-metre, 165kg mako shark with protruding fins and razor-sharp teeth was spotted hanging off the back of a fishing boat being driven down a busy city road.

Video shows the creature strapped into a boat hooked to the vehicle, as the car made its way down Sydney’s M5, just before the Runway Tunnel.

The mako shark was the prized catch of a group of fishermen, who captured him off Botany Bay and transported him 40km to their home in Cecil Park in the city’s west on Sunday.

‘Basically what we do, is go out for day of fishing and catch one every 3-4 months,’ said Nathan.

‘Then we go home, process and vacuum seal everything (usually late at night so its cooler) and once that’s done, we distribute among four different families.’

The sighting is the latest in a spree of unconventional shark spottings across Sydney.

Earlier this year, swimmers were evacuated from a netted-off ocean pool full of kids at Brighton Le Sands Beach.

Another video currently being circulated online also shows a shark in the middle of a roundabout in suburban Roselands. 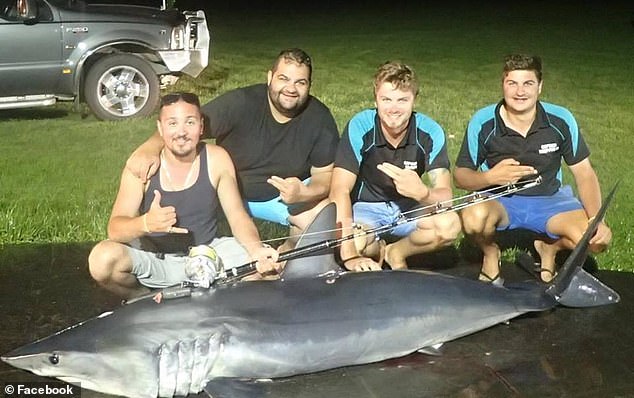 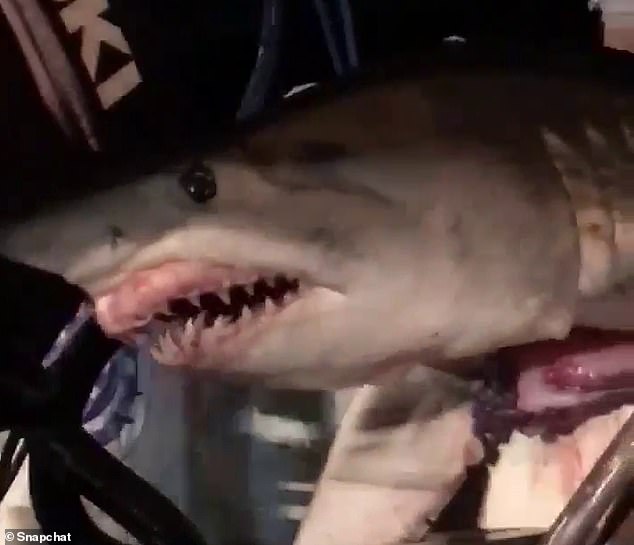 Online opinion on the TeamBaitcatcher Facebook page, where the video was first posted, was divided.

Some praised the fisherman for their catch while others expressed sadness towards the shark.

‘Absolute Legends and the Mako actually looked like he was enjoying the ride,’ said one commentator.

‘Nice fish and well done but why be a bunch of flogs and hang it out the back of the boat,’ commented another.

With fishermen legally allowed to hook one mako shark each day, Nathan confirmed the men were not parading their prize. It was simply too big to fit into the car door.

‘We definitely weren’t showing off. The shark was enormous and just physically too big to fit into the car door,’ he said.