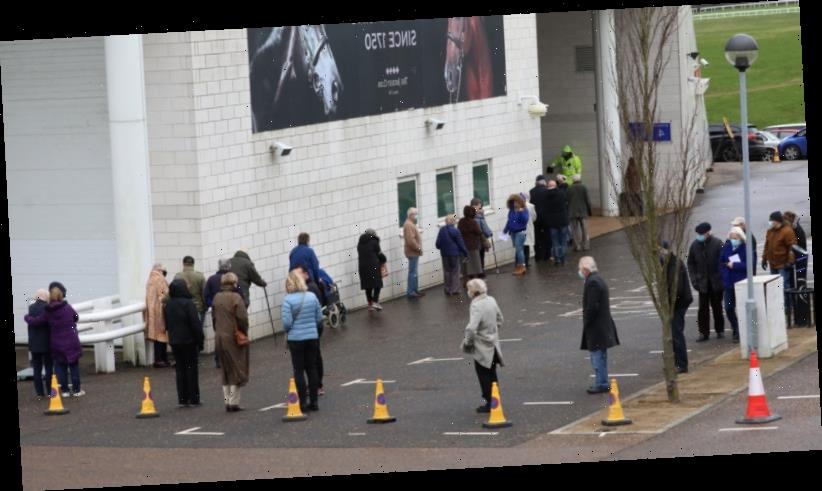 Sporting stadiums and car parks could be used as mass vaccination centres to help deliver the coronavirus jab to millions of Australians.

The public may also be able to attend information sessions before lining up for their first vaccination, giving them the chance to have their questions answered.

These proposals are being considered by Royal Australian College of General Practitioners and Australian Medical Association Victoria, as doctors begin planning for how nearly half of Australia’s population can be vaccinated by the middle of the year. 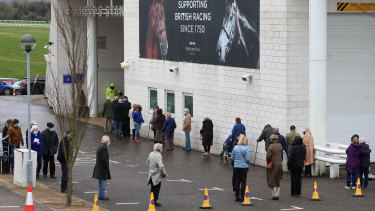 Members of the public queue to receive the Oxford-AstraZeneca coronavirus vaccine at a mass vaccination centre at a Epsom racecourse in England.Credit:Getty Image

The leading medical groups are hopeful people will have a choice of where to go for their shots, from their local GP clinic, to large state-run vaccination sites or drive-through clinics.

There have been discussions about setting up a vaccination centre at a football stadium in Melbourne, allowing 60 people to receive their dose at one time while still remaining socially distanced.

Doctors believe building patient trust by educating them about the vaccine will be key to their success in rolling out the program efficiently.

Australian Medical Association vice-president Chris Moy said: "This is not going to be just like a flu shot, where people have had it before." 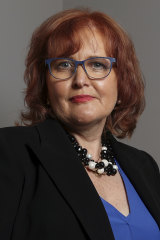 He is investigating the possibility that the whole process could be done while people remained in their car, with three rolling traffic bays for arrival, vaccination and observation.

Dr Haikerwal said more vaccinations could be done at once if bigger venues were used, such as car parks, and discussions had begun to set up a mass vaccination centre at a football stadium in Melbourne, allowing 60 people to receive their dose at once.

In Britain, which is reporting more than 1000 coronavirus deaths a day, sports stadiums, convention centres, a science museum and a racecourse have become mass vaccination centres. Prime Minister Boris Johnson recently announced a plan to open a number of centres 24/7.

Royal Australian College of General Practitioners president Karen Price confirmed a number of ideas were on the table for the Australian rollout. She said some smaller clinics might band together to run vaccination clinics, and part-time GPs be recruited for the vaccination program, so that other GPs were still able to meet their regular appointments.

Later in the year, younger patients may also get their vaccinations “opportunistically” while visiting their doctor for other issues, Dr Price said.

“It's going to be a range of different models, from small to large,” she said.

Dr Price said it would be extremely important that the public received information and was given the opportunity to ask questions about AstraZeneca vaccine, which is thought to be completely effective in preventing people falling seriously ill or dying from coronavirus.

She said people needed to know that even if they got the vaccine they would still need to isolate if they had cold symptoms, because it was unclear how long they would be protected from the virus.

Dr Price said that information may be able to be provided through regular consultants, videos, or information sessions held before the vaccinations, in person or online.

“We have to [translate] all of the gobbledygook that people see on TV. Patients come in to us and want to know the answers through their trusted GP,” she said.

Earlier this month, Prime Minister Scott Morrison said the government was aiming to have 4 million people vaccinated by the end of March.

Vaccination of more than 670,000 vaccination staff, border workers, frontline health workers and aged care residents is set to begin on February 15. Next in line are more than 1 million elderly Australians, aged 80 or over.

A spokesman for federal Health Minister Greg Hunt said the government would be inviting GPs to participate in the nation’s vaccine program within the next week.

“General practices currently deliver vaccines in a variety of ways and will do so relevant to their own practices and community needs with regards to COVID-19 vaccines,” he said.

“The government is working constructively with the medical community on all matters including consent, registration, training and clinical standards.

The Australian Medical Association's NSW president, Danielle McMullen, said it was difficult to plan for the vaccine rollout because the schedule for the timing and number of vaccines was still not clear.

She said if there was a steady supply over the year, the vaccines could be delivered through willing GPs. But if there was patchy supply it may make more sense to deliver them, at least initially, through larger community hubs.

“As frustrating as it is when it’s only a few weeks away and we don’t have a clear plan yet, I’m still hopeful that will emerge," Dr McMullen said.