Singapore: Australian man Andrew Gosling has been sentenced to five and a half years in jail by a Singapore court after he threw a wine bottle off an apartment and killed a Singaporean father of four.

The bottle killed 73-year-old Malaysian-Singaporean man Nasiari Sunee and injured his wife Manisah as they were about to sit down to dinner in the outside area below for a friend’s housewarming at the Spottiswoode building in central Singapore. 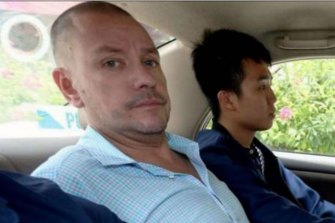 Australian IT worker Andrew Gosling has pleaded guilty to killing 73-year-old grandfather Nasiari Sunee after throwing a wine bottle from his high-rise flat in Singapore.Credit:Nine News

Gosling had spent that afternoon in August 2019 drinking and winding himself up with racist thoughts about the Bali bombings and Islamist attacks in Melbourne before deciding he would throw the bottle at the Muslim family.

As he drank more, the thought “crossed his mind” that he should use a weapon to shoot at the family around the barbecue, the court told. Instead, Gosling found the empty red wine bottle at the seventh-floor rubbish chute, grabbed it by the neck and hurled it overarm towards the group almost 20 metres below. It killed Nasiari, a delivery driver, after striking him on the head. The court was told that the former employee of mining giant Orica shouted, “religiously motivated vulgarities” after throwing the bottle at the family.

Judge Victor Yeo Khee Eng said Gosling’s behaviour was unacceptable and sentenced him to four years in jail for the offence of causing death by a rash act and 18 months for grievous bodily harm. Eng ordered the sentences to be served consecutively – meaning Gosling will spend more than five years in jail in total – 18 months short of the maximum sought by the prosecution. 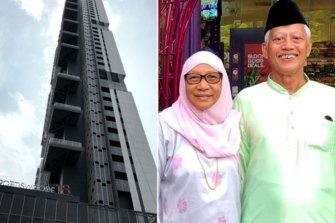 The late Nasiari Sunee with his wife, Madam Manisah, and the apartment block where he was killed while gathering for a barbecue.Credit:Nine

“The accused conduct of deliberately throwing a wine bottle is egregious and akin to a killer litter offence,” he said. “In my view, a consecutive sentence is appropriate to give effect to the twin primary sentencing considerations of general deterrence and retribution.”

Eng said he agreed with the prosecution that the offence involved religious hostility – charges that are particularly sensitive in Singapore. That factor meant that Gosling’s case warranted the unusual decision to force him to serve the sentences one after the other for the same act, rather than at the same time. The city-state is one of the most diverse countries in the world but grapples daily with an undercurrent of religious and racial division.

“Such offences could undermine Singapore’s religious and racial harmony and must not be tolerated,” Eng said. “Interracial harmony in Singapore is sacrosanct.”

Nasiari’s son Muhammad described his father as a family man. “He was a great man, who leads by example”. The sentence was handed down at the end of the first week of Ramadan – the Muslim holy month which runs until May 1. 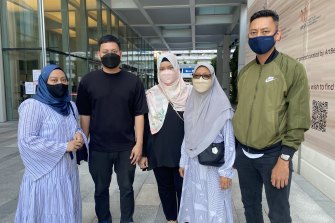 Nasiari Sunee’s family, including his son Muhammad (right) and his wife Manisah (second from right) outside Singapore’s state court on Friday after the sentencing of Australian man Andrew Gosling for his death in 2019. Credit:Eryk Bagshaw

“During this Ramadan when we do our prayers we really feel the loss of him,” said Muhammad. “He was healthy so for him to pass on in that manner was shocking. It’s hard to accept the loss of our father, but life has to go on. We are really glad that finally there is a closure.”

Gosling’s parents, Ian and Pamela said the act was totally out of character for their son. The 49-year-old had spent his career working across the world including in Britain, Germany, Spain, Romania and Malaysia.

“Something snapped and we don’t quite know what that was,” said Ian. 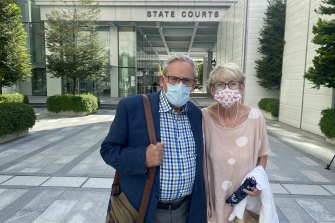 Gosling has spent the past 2½ years in Singapore’s Changi prison and will remain behind bars for at least another year.

One of his former cellmates, who asked only to be identified as Richard, said Gosling was under constant threat at the prison due to the nature of his crime.

Malaysians are over-represented in Singapore’s prison system and while newspapers have conventionally been censored by guards, a copy of a local media article smuggled into the prison system, left Gosling vulnerable to reprisals, he said.

Richard told The Sydney Morning Herald and The Age that conditions inside the remand centre were harsh. “You’re locked down 23 hours of the day,” he said.

The centre holds prisoners who have committed crimes from across the spectrum. Richard, who was in jail for a financial crime, had to share with a paedophile.

“Andrew was always located in a cell that had 24-hour camera surveillance,” Richard said.

In the hour a day that they did have out of their cells, Richard and Gosling would talk about football, COVID-19 and religion, but over time Gosling became more and more reserved.

Richard has been trying to contact Gosling since he was released last year but said he has had his email blocked by Singapore’s prison service.

“I would say that there are people out there that do love you and do care for you. And we will be there for you,” he said. “What has occurred was a terrible, terrible matter for all involved, but life goes on.”

Gosling has offered to meet with the Nasiari family to express his remorse in person once he is released. “We are more than happy to meet him,” said Muhammad.

Gosling’s defence team said on Friday they would appeal his sentence to the High Court.