‘I set the snow ablaze!’: Snowed-in homeowner takes matters into his own hands by using a home-made FLAMETHROWER to clear his driveway

A snowed-in homeowner took matters into his own hands when it came to clearing his driveway – by using a flamethrower.

The disgruntled man put his camera down and filmed himself as his flamethrower tore through the thick layer of snow.

With a gas canister placed on the floor, the home-made flamethrower tears its way through the snow, leaving a thick, black layer on his driveway.

With a gas canister placed on the floor, the home-made flamethrower tears its way through the snow, leaving a thick, black layer on his driveway

Speaking about the home-made device, he said: ‘Ever since I was a kid I always thought it’d be cool to have a flamethrower so now that I’m older and more knowledgeable I went out and built one out of spare parts in my shop.

‘It runs off a diesel and oil mix and is powered by CO2.

‘I hate snow and love to catch stuff on fire so I set the snow ablaze. It burns five gallons of diesel in about ten minutes and gets extremely hot.

‘Has quick change tips to fan the spray or stream it for long distances of up to fifty foot. I live in Grassy, MO.’ 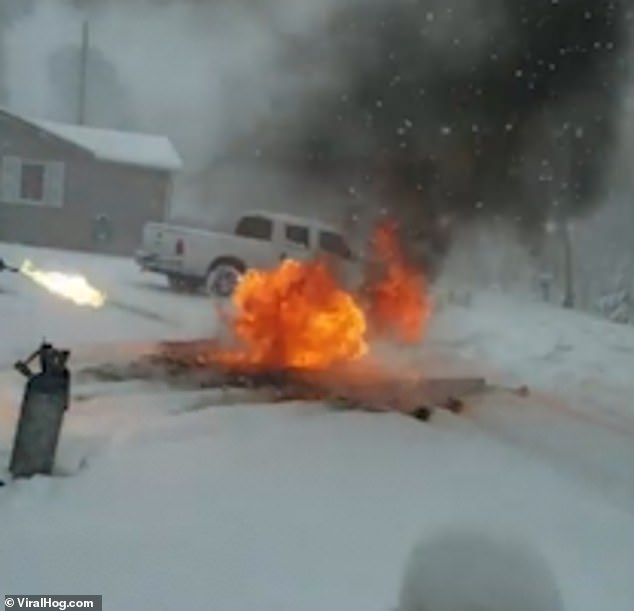 Although the snow had been melted, a thick layer of black had been left in its place