Authorities are warning Melburnians and residents of central Victoria to keep their windows and doors closed on Tuesday, forecasting “very poor” air quality in the area owing to planned burn-offs across the state.

Victoria’s Environment Protection Authority said the city and surrounding central region was likely to experience fair to very poor air quality on Tuesday, noting smoke from planned burns was expected to drift into the area. 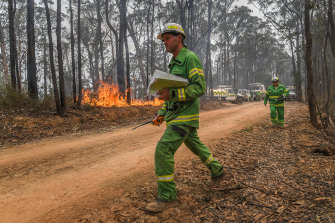 Conditions are tipped to be fair in the Latrobe Valley, north-east, south-west and Wimmera regions, and good elsewhere in the state, the authority said.

The “very poor” category is used when air is probably smoky and dusty, and the EPA advises residents to avoid exercising outdoors if they develop a cough or shortness of breath.

Smoke haze hovered over large parts of Victoria on Monday as planned burn-offs continued. Among the worst-affected areas on Monday was Mooroolbark in Melbourne’s north-east, which registered “extremely poor” PM10 readings between 10am and 11am.

The air quality at Lilydale was extremely poor at midday, while it was very poor at Dandenong.

The “extremely poor” category, the last rung on the authority’s range of air quality measures, demands that people stay indoors as much as possible with their windows and doors closed until the quality gets better, and, if they feel their home is getting uncomfortably smoky, that they consider going to a place with cleaner air if it is safe to do so.

Air quality across most of Melbourne was rated good as of about 1.40pm on Monday, while it was fair in locations including Geelong South, Alphington, Brooklyn and Traralgon.

Forest Fire Management Victoria chief fire officer Chris Hardman said crews have done 23 burns across the state since Friday alone and 16 of them were priority burns.

“Autumn is a critical time of year for us to do that planned burning,” he told 3AW.

“You wake up in the morning [at] this time of year and you get a dew in the morning. That means that the fuels on the forest floor absorb that moisture so, when we do the ignitions, those fires are not going to escape and become bushfires.

“I do really understand the smoke can be really challenging for people with health conditions and respiratory conditions, so we do monitor the air quality; we work very closely with the EPA.”

VicEmergency issued an alert on Monday advising that while there was “no immediate threat to the community”, people in Melbourne and surrounds who experienced wheezing, chest tightness and difficulty breathing should call triple zero.

The centralised emergency website said those who were more sensitive to smoke should try to stay indoors, including people with heart or lung conditions, pregnant people, those older than 65 and children under 14.