The litter of puppies raised by an entire VILLAGE: Six orphaned Springer Spaniels enjoy a Christmas reunion after they were taken in by residents when their mother died

These heartwarming photos show a litter of six Springer Spaniel puppies, who were raised by an entire village, enjoying a Christmas reunion.

The puppies, who originally numbered 14, were orphaned when Nutmeg, their eight-year-old mother, died from complications following their birth.

Owner Christine Conner, 53, from Tedburn St Mary, Devon, realised she would have to hand raise each of the puppies and asked the entire village to help her out.

The pups were eventually adopted around the country but Christine managed to get six of them back for an adorable Christmas reunion. 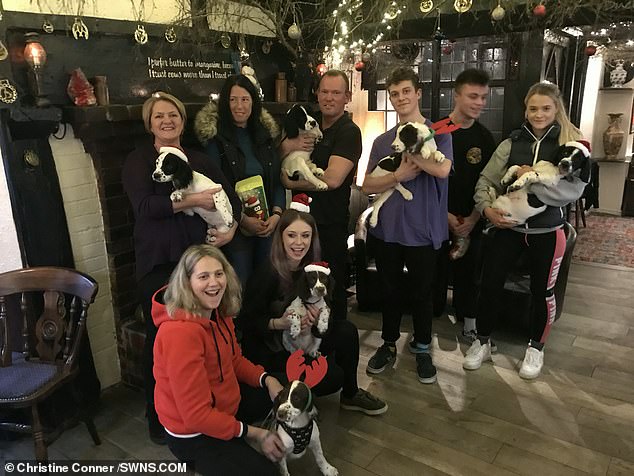 Owner Christine Conner, 53, organised a reunion of six of the 14 Springer Spaniel puppies born to her dog Nutmeg 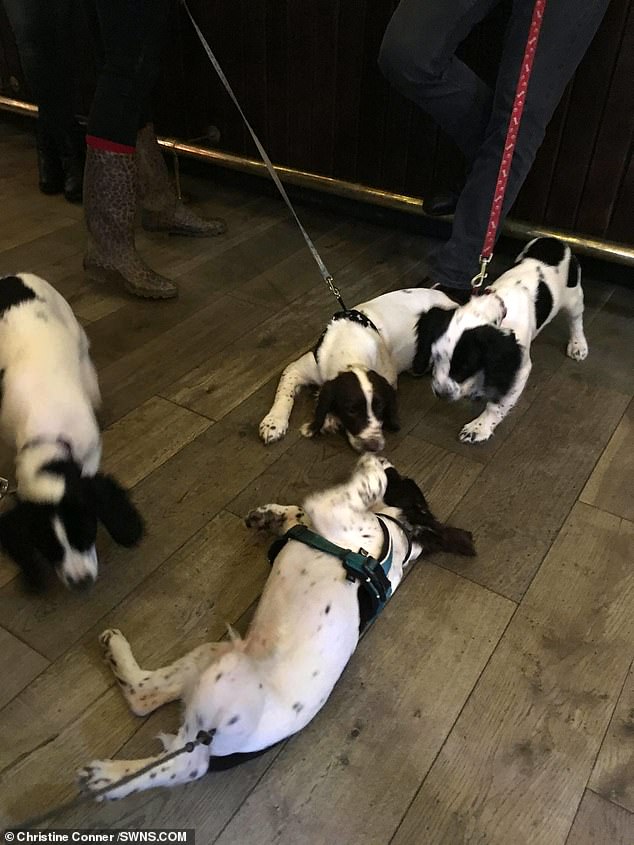 The adorable puppies had to be raised by villagers after their mother Nutmeg, aged eight, died during labour

Christine admitted she was daunted when Nutmeg died and left her with 14 puppies to raise – but the entire village soon rallied around her.

A rota was drawn up with people signing up for slots to look after the adorable pups.

When they matured, they were quickly adopted and now they live all over the country.

But Christine managed to get six of them back together for a Christmas reunion, at the Kings Arms, the village’s local pub.

Christine, a journalist, said: ‘We had a Christmas reunion for the puppies and got as many as possible together.

‘We went to the local pub and had a few beers with the owners and we had some doggy stockings. 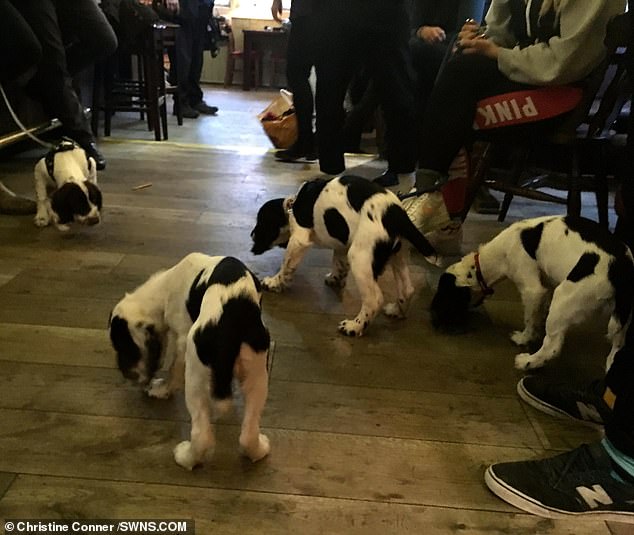 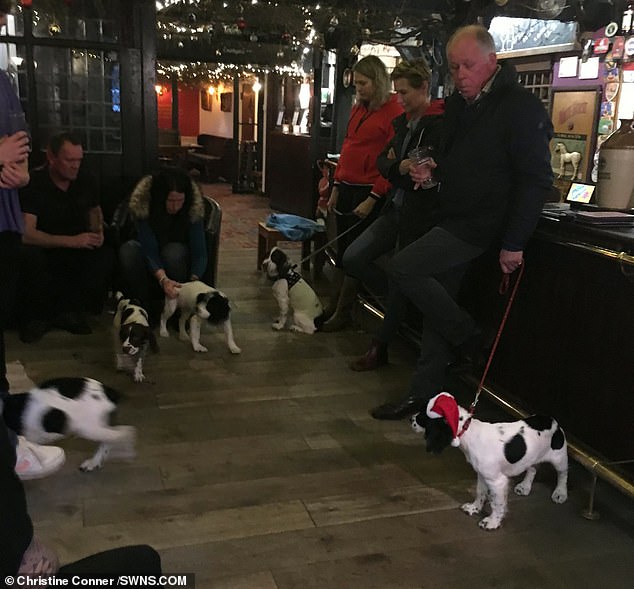 Christine managed to get six of them back together for a Christmas reunion, at the Kings Arms, the village’s local pub

‘It was just an excuse to get them together really, we had six of the puppies there – they had great fun bouncing all over the place.

‘They seemed to know each other I think, it was nice.’

All of the puppies have been renamed since being adopted.

Christine continued: ‘They’re fantastic, the owners have all said the dogs are really well behaved and get on with people well.

‘Humans have been their parents if you like, so they are used to people. 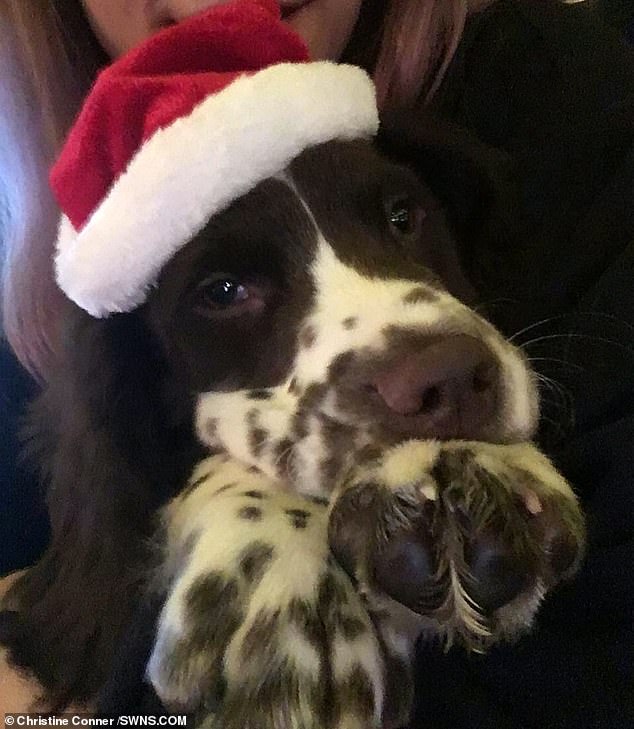 Christine was delighted to be you reunited with the dogs. She added that their new owners said they were ‘fantastic’ 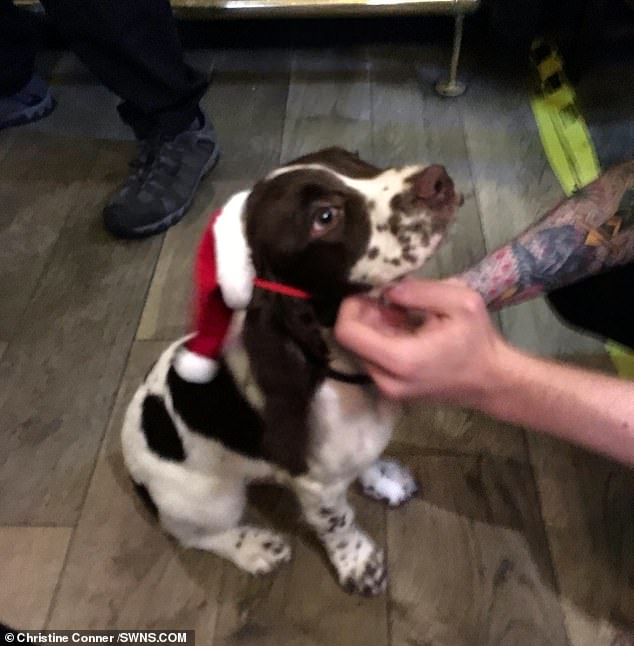 ‘It was quite emotional really because we remembered what it was like feeding them and wiping their bums and hoping they would survive.

‘When we lost a couple of them we thought we were killing them, but that’s just what happens.

‘To see so many survive and in one place was quite emotional.

‘That is probably the last time we will see so many of them in one place, but we are trying to organise a yearly meet up – maybe on the dog’s birthdays.’

Catherine said the dogs are local celebrities in the area and are often recognised in the street. 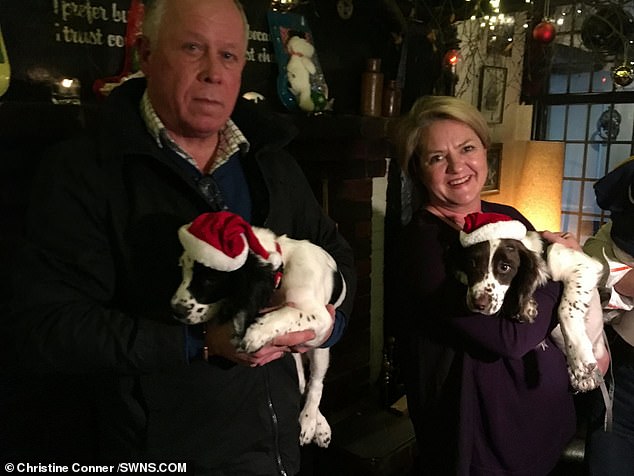 News of the puppies story first hit the headlines in September and even attracted attention in the United States.

Catherine added that this time she hops for a tweet from President Donald Trump.

She said: ‘It was amazing to see the story go so far, especially on Fox News, this Christmas we’d like a tweet from President Trump.’

In September, Nutmeg suffered difficulties after going into labour and was rushed to a vet for treatment.

She was expecting around eight puppies but they kept coming – and ended up with a litter of 14 placed into a laundry basket. 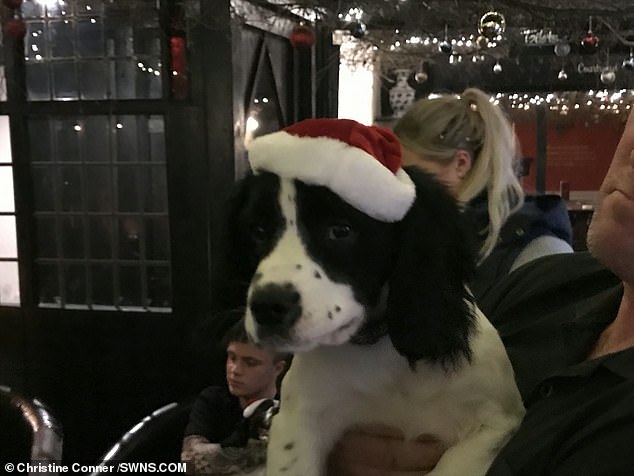 Sadly, three of the original 14 puppies didn’t survive but the other 11 have since flourished 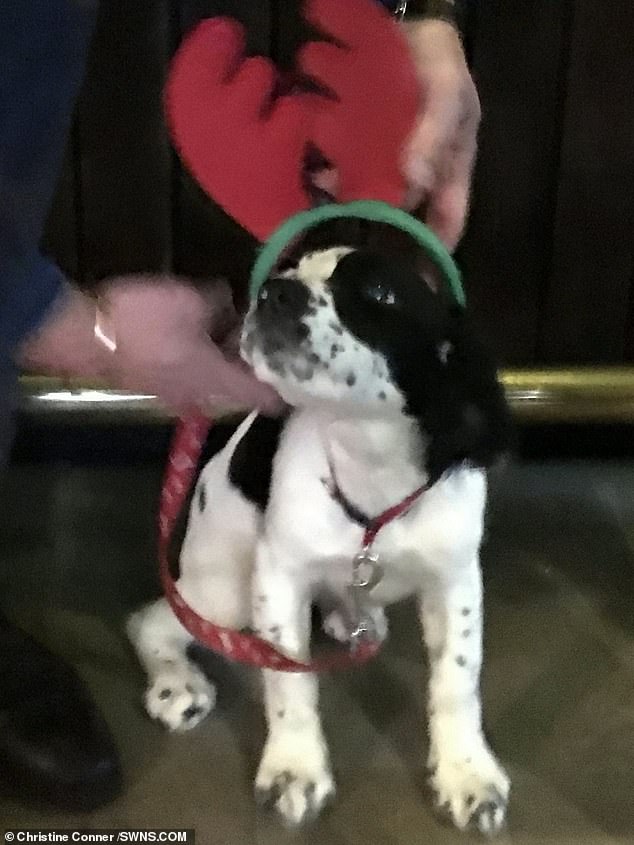 Christine said that the puppies needed round the clock care and had to be fed from a bottle every two hours.

Sat around the kitchen table the next morning, bottle feeding the blind dogs, Christine snapped a picture and shared the news online.

And soon, the family were inundated with well-wishers and volunteers wanting to help.

Sadly, three of the puppies didn’t survive but 11 flourished.

Speaking at the time, Christine said: ‘People started ringing up saying, ”can we help”, and I said, ”sure, come on over”.

‘They turned up with food and cakes and donated their time.

‘There’s a church kitchen in the village and they fired up and started sending us meals because we didn’t have time to shop.

‘Pretty soon we had a rota drawn up and people filled their names in and came and helped the puppies.’