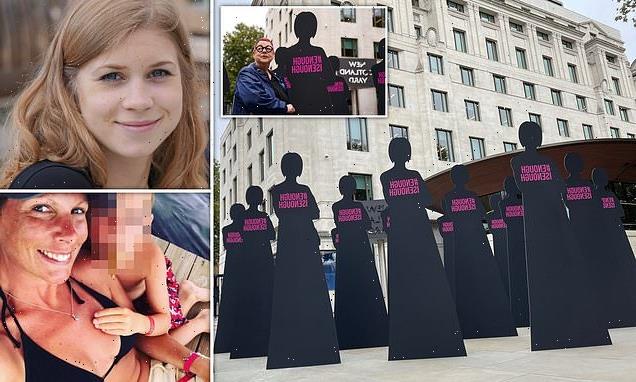 Silhouettes representing 16 women who have been killed by serving or former police officers since 2009 have been placed outside the Metropolitan Police headquarters in London.

The black figures, bearing the pink slogan #EnoughIsEnough, are being displayed outside Scotland Yard by the charity Refuge to launch its campaign of the same name.

Refuge is calling on the Government to put an end to violence against women.

The campaign comes in the wake of the murder of Sarah Everard by serving Metropolitan Police officer Wayne Couzens, which has put issues around women’s safety in the spotlight.

‘Enough is enough – our own Home Secretary Priti Patel said this and she said she’d use everything in her power to stop this epidemic of violence against women and girls’, said Ruth Davison, chief executive of Refuge, which provides specialist services to survivors of domestic abuse.

‘We need more than just words, we need actual action, action that will make a difference and save women’s lives, keep women safer day to day.’

Of the 16 killings since 2009, ten have been murders carried out by police officers, ex-police officers and a former special constable, according to The Femicide Census, which keeps track of women killed by male perpetrators in Britain.

The 16 also included manslaughter cases such as Timothy Brehmer, who was cleared of murder after strangling his long-term lover Claire Parry in May 2020. 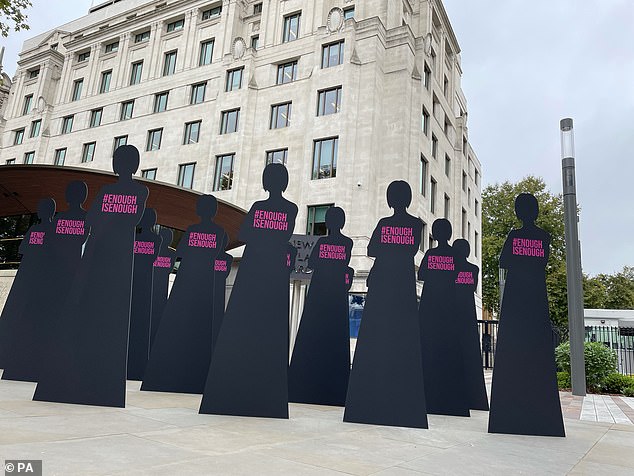 The black figures, bearing the pink slogan #EnoughIsEnough, are being displayed outside Scotland Yard by the charity Refuge to launch its campaign of the same name 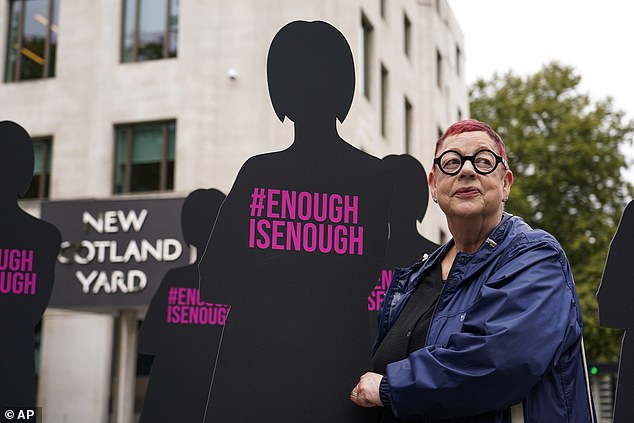 Comedian and ambassador for Refuge, Jo Brand, backed the campaign and said women often feel they are not being taken seriously by police in reporting domestic violence

Ms Davison told the PA news agency that the Home Secretary has ‘a real opportunity’ to help keep women safer in the Police, Crime, Sentencing and Courts Bill, which returns to the House of Lords on October 20.

The Bill contains a proposed new serious violence prevention duty, which requires police and other public bodies to work together to prevent and tackle serious violence.

But as the Bill currently stands, the definition of serious violence in the prevention duty does not explicitly include domestic abuse, domestic homicide or sexual violence – something Refuge wants to change.

Baroness Helena Kennedy QC, a patron of the charity, said she will ‘certainly be putting an amendment in in the House of Lords’.

She said domestic violence should be given the same priority as terrorism, and added: ‘In this Bill, there is a serious violence duty and what we’re seeking to do is to have violence against women and girls included in it.

Baroness Kennedy, who has spent much of her career dealing with violence against women, said it should not be left to local areas to decide whether to include domestic abuse, domestic homicide or sexual violence in their new serious violence prevention strategies. 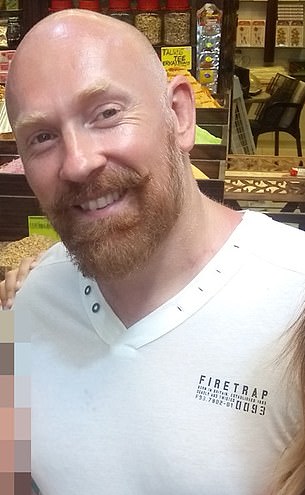 Met Police diplomatic protection officer Wayne Couzens (pictured), 48, is due to be sentenced at the Old Bailey for the killing of Sarah Everard

‘And as a result, policing priorities will change and it’s right that in some areas there will be at a particular time, a set of priorities that will be different from somewhere else.

‘But violence against women and girls is universal and it is across the whole of the country and so it should be up there wherever the policing is done.’

Baroness Kennedy also said, in the vast majority of cases where women have been killed by someone they know, they have not received a ‘suitable’ response from police when they have alerted officers to being stalked or harassed ‘because it’s seen as trivial offending, and yet it’s often a precursor to more serious crimes’, she added.

Jo Brand, a comedian and ambassador for Refuge, echoed that sentiment, saying women often feel they are not being taken seriously by police in reporting domestic violence.

She described recent advice issued by the Metropolitan Police to women in the wake of Couzens’ sentencing which suggested running into a house or waving down a bus if they are in fear of a lone male police officer was ‘ridiculous’.

Ivan Escak murdered his estranged wife at her hair salon in Ashford, Kent, when he stabbed her 11 times. He was jailed for life in 2013

She added: ‘The onus is not on (women) to poke people in the eye with a key if we think they’re a bit dodgy.

‘To me there’s still a hidden epidemic of domestic violence which is not taken seriously, which the police need to take more seriously and where men need to stand up with women and say “we’re not having this”.’

The comedian also criticised what she called a culture of ‘misogyny and laddism’ in the police.