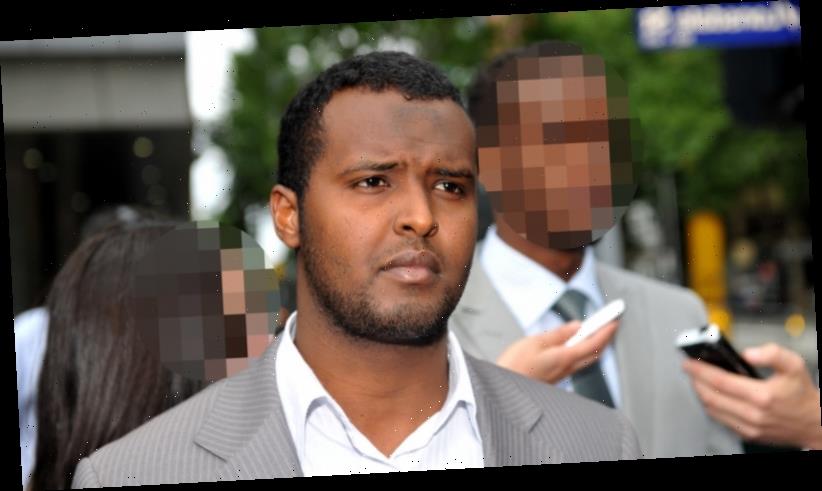 Yacqub Khayre had a long criminal history, had previously been acquitted of terror charges and was watching extremist material online in the weeks before he killed a Melbourne man in the name of Islamic State.

But an inquest into the 2017 siege in Brighton, when Khayre shot dead a receptionist at the Buckingham Serviced Apartments, took a woman hostage and then died in a shoot-out with police, has been told he wasn’t considered a person of interest by counter-terrorism police at the time. 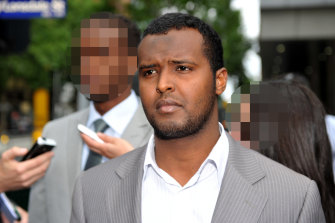 Yacqub Khayre leaves court in Melbourne in 2010 after being acquitted of planning a terrorist attack on the Holsworthy army base in SydneyCredit:AAP

On June 5, 2017 Khayre shot dead the apartments’ receptionist, Kai Hao, and soon after told triple zero operators of a “hostage situation” as he held a sex worker against her will.

In the calls, played in the Coroners Court on Monday, the sex worker can be heard crying while Khayre tells the operator: “It’s a hostage situation … No one comes into room 11 or else this hostage dies.”

“The clerk at the front is dead.

“There is a bomb at the premises as well.”

About an hour after a second triple zero call, Khayre phoned the Channel Seven newsroom and told the chief of staff: “This is the Brighton hostage. This is for IS, this is for Al-Qaeda.”

After 6pm, Khayre ran from apartment 11 and fired at heavily-armed police, wounding two officers, before he was shot dead. A third officer was also wounded in the crossfire. All three have returned to work in varying capacities. 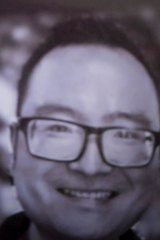 Mr Hao’s death came less than two months after the 36-year-old was married. The sex worker, who cannot be identified, was physically unharmed. There was no bomb.

Coroner Audrey Jamieson is conducting an inquest into the siege and investigating how closely Khayre was being monitored while on parole and whether his actions could have been prevented.

Khayre was in 2010 acquitted of terror charges related to a foiled attack on the Holsworthy army base in NSW, but by 2012 was back in prison over a home invasion. He also had convictions for assault, weapons, arson, theft and drug offences.

Barrister Rachel Ellyard, the counsel assisting the coroner, said that in the months before the siege, Khayre – while on parole – bought guns from associates and began accessing ideological and violent material online.

A search of Khayre’s devices after his death showed that from May 14, 2017, he was watching terrorist and extremist material – including the sermons of an Islamic preacher, the siege at Sydney’s Lindt cafe and the attack on the Charlie Hebdo offices in Paris – and was researching martyrdom.

He had also highlighted June 5, 2017 on his calendar with the word “Inshallah” (God willing), Ms Ellyard said. 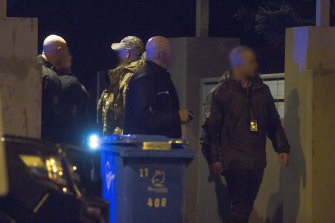 Police in Brighton on the night of the siege.Credit:Luis Ascui

But an officer who was formerly with the Victoria Police counter-terrorism unit, said by late 2016 and 2017 Khayre was no longer considered a “profile target” on a list of people who were closely monitored.

The officer, who cannot be identified, said Khayre’s “lifestyle” of drug-related offending meant authorities considered him “incompatible” with ideological or terrorist-inspired offending. Police also had no evidence of “pious type behaviour”, such as social media posts or that Khayre was a follower of an imam, on which to act.

“That information didn’t come to us, we weren’t aware of it,” the officer said of Khayre’s internet searches.

Had police received that sort of information, authorities would have raised Khayre’s risk level and begun closely monitoring his behaviour. 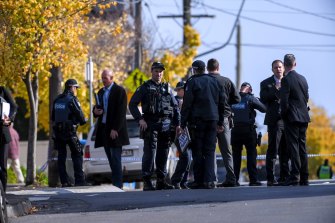 Police at the scene of the Brighton siege on June 5, 2017.Credit:Eddie Jim

“That would have been one of those indicators we look out for … and something we were concerned about,” the officer said.

The inquest will also examine Khayre’s involvement in a court program aimed at helping Muslim men re-integrate into their communities after serving jail terms.

Ms Ellyard said Khayre’s involvement in the program included more than 100 sessions with his case manager and a religious mentor, and that he complied with all requirements although he declined to switch to another religious instructor when the mentor took leave from February 2017.

Ms Ellyard told the coroner that in hindsight, it appeared Khayre either left out key details about his radicalisation to his case worker and religious mentor, or had a “rapid change in direction” over the last weeks of his life.