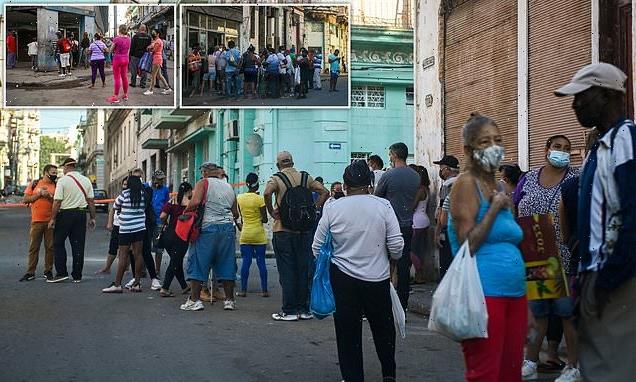 Shoppers in communist Cuba have been forced to queue for 12 hours in blazing sun just to buy one day’s worth of food as Covid-19 worsens the country’s economic crisis.

The daily ordeal which Cubans have endured for about 60 years of communist rule, often with no access to a toilet or drinking water, has been worsened by the pandemic, a steep economic downturn and tightened US sanctions.

‘I spent almost all night here just to buy something. It is not easy, it is a big sacrifice just to be able to eat,’ shopper Edelvis Miranda, 47, told AFP at a market in Havana last week.

The homemaker had taken her place in the queue at about 1:00am, and finally left around 11 hours later, just before noon.

‘It was worth it, because I found everything. Now some rest, and then back to the queue again,’ she said on her way home with two litres of oil, two packets of chicken, some minced meat and detergent.

Cuba recorded an official inflation rate of 70 per cent in 2021, when the economy recovered a modest two percent after an 11 per cent drop in 2020, signaling the nation’s worst economic crisis in almost three decades.

With government reserves dwindling, food imports – some $2 billion worth per year before the pandemic struck – had to be drastically cut back in the country of 11.2 million. 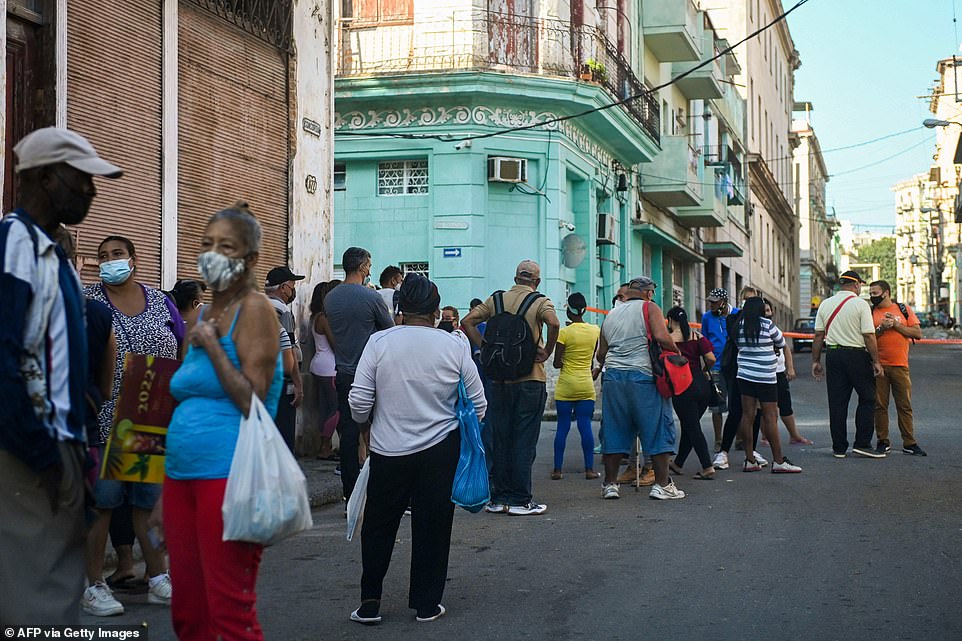 Shoppers in communist Cuba (pictured in the capital, Havana) have been forced to queue for 12 hours in blazing sun just to buy one day’s worth of food as Covid-19 worsens the country’s economic crisis 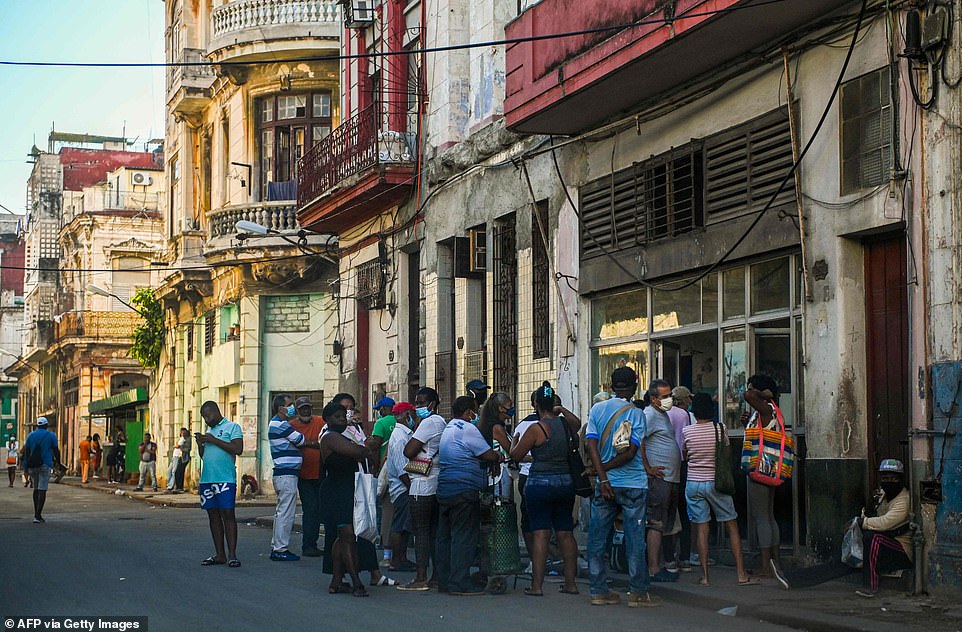 Cubans are no strangers to queuing for everything from bread to toothpaste, often waiting for hours with no access to a toilet or drinking water, and always with the fear of leaving empty-handed

Last May, the government said imports, which normally cover 80 per cent of the island’s needs, were at their lowest level since 2009.

The shortages affect everyone; even the well-heeled have to contend with long lines, though they often pay other people to hold their place.

Those who can come armed with snacks, water, coffee or a wooden bench to sit on. Often, police are at hand to keep order in queues that stretch down several street blocks.

At a market in the capital, an announcement comes an hour before opening time that there are five products available for the day – an unusual bounty that sends a ripple of excitement through a line of about 400 hopeful shoppers.

‘This is undignified,’ grumbled Rolando Lopez, a 66-year-old pensioner who was not among the lucky ones.

A few dozen among the luckless quickly form a queue for the next day’s shopping, designating night ‘guards’ to ensure no one loses their place.

‘It is the daily struggle of the Cuban. What else can you do?’ asked housewife Maria Rosabal, 55. 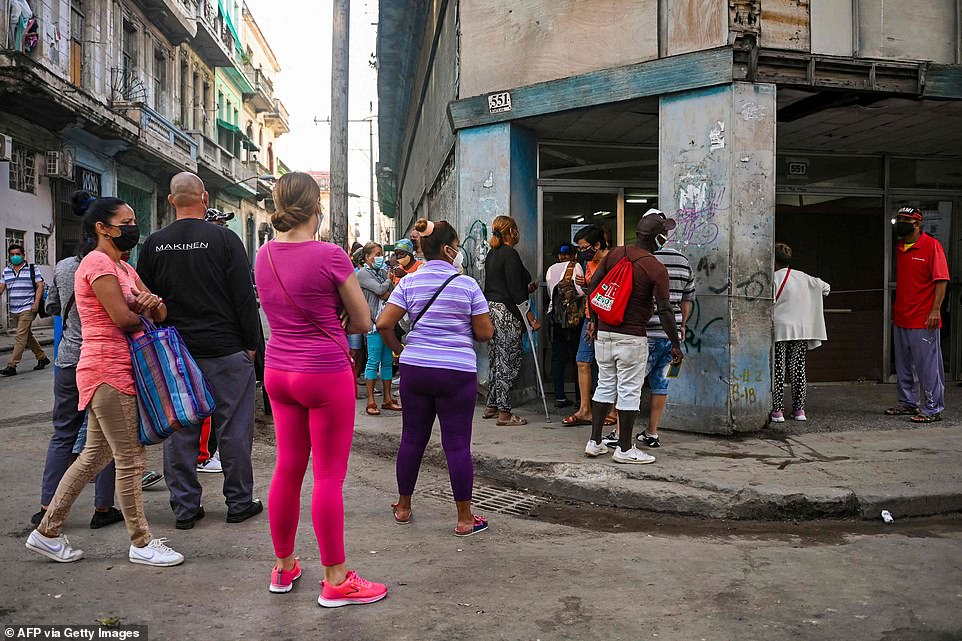 Cubans have endured queueing for hours for food for about 60 years of communist rule but the daily ordeal has been worsened by the pandemic, a steep economic downturn and tightened US sanctions

Some stores in Cuba nowadays accept only foreign currency. But US dollars are no longer legal tender and can only be obtained on the black market.

These stores are better stocked than peso-based ones, but few Cubans can afford to frequent them.

It is common for shops to have only two or three products at a given time, or none. Sometimes, people queue not knowing what, if any, product they will be able to buy that day.

Specific products often disappear from the shelves completely for periods of time, as is the case now with milk.

When they reappear, they are usually limited to the foreign currency stores, and sell out within hours.

Shortages are not a new thing. When a Cuban cuts a line, it is common for them to be chided: ‘We have been queuing for 60 years, and you still don’t know how?’

But matters have taken a turn for the worse since former US President Donald Trump toughened sanctions that have been in place since 1962, and the pandemic froze tourism and pummeled the global economy. 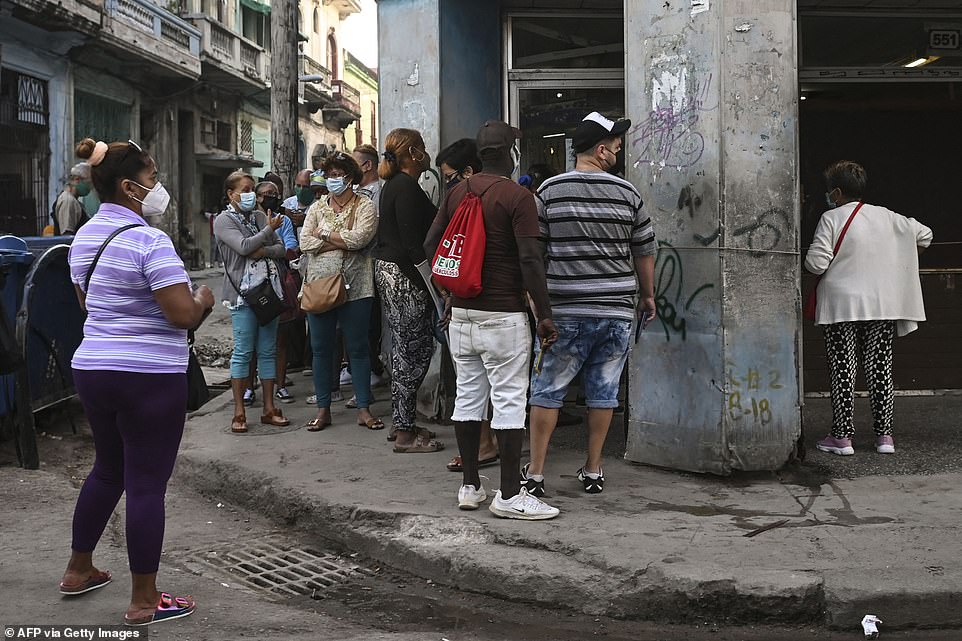 It is common for shops in Cuba to have only two or three products at a given time, or none. Sometimes, people queue not knowing what, if any, product they will be able to buy that day

The situation was further complicated by a monetary reform launched a year ago that entailed a significant wage increase in a country where most workers are employed by the government. But it further fueled price inflation.

Trying to contain the fallout, authorities carefully scan the identity card of each shopper, and the ration books that give Cubans access to a basket of government-subsidized products every month.

Still, ‘there are people taking advantage of the situation to make money,’ said Lopez, the pensioner.

Placing a note of 100 pesos (about $4) inside the ration book prevents a purchase from being registered, he said. The method is used by people who buy and illegally resell already-scarce products for sky-high prices.

The government in Havana has said that boosting national production is the best way to deal with shortages and queues, and has slowly started opening the economy to private enterprise.

But the measures promise little short-term relief for consumers like Lazaro Naranjo, 77, who spent two hours in a queue to buy chicken, only to leave empty-handed.

‘It reduces you to nothing,’ he said.