Police are investigating after a young boy was caught brandishing a huge knife on camera outside a secondary school.

The boy, who looks to be in his teens, was seen laughing with a group of other youngsters outside the school, and posing for selfies as he clutched the blade.

The incident took place last Friday, outside Downend School in Bristol – and came to the attention of Avon and Somerset Police on Saturday morning.

And police now believe they have identified the individual involved, and assure they will be taking ‘positive action’ once their enquiries are complete. 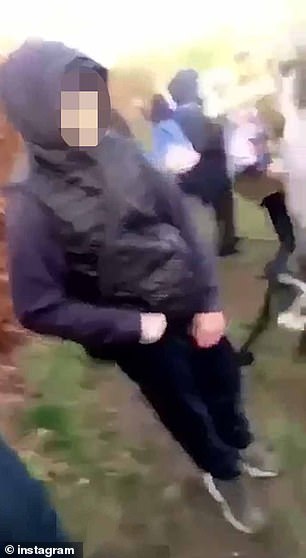 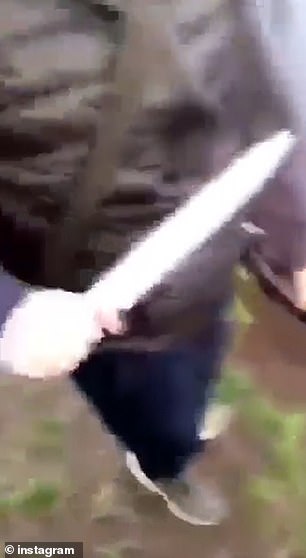 Meanwhile Castle School Education Trust, which runs Downend School, have stressed that the boy involved has ‘no connection’ to the school.

A spokesman for Avon and Somerset police said: ‘Police were made aware of this incident on Saturday, December 1.

‘A concerned member of the public got in touch by email to report the online footage.

‘Officers believe they have identified the individual involved and once their enquiries are complete will be taking positive action.

‘Officers stress that it’s never acceptable to carry a knife. Knives do not keep you safe.

‘People who carry a weapon are more likely to be hospitalised themselves with an injury caused by violence.’

‘I would suggest it is now a police matter, therefore feel it is not appropriate to comment any further at this stage.’

And a spokesman for Castle School Education Trust said: ‘Staff on duty dealt immediately with an incident at the end of school on Friday.

‘The individual concerned has no connection with Downend School. The police were informed immediately and the matter is now in their hands.’

Reports of knife possession outside schools in Avon and Somerset has leapt up in comparison to a few years ago.

Any young person who is concerned that a friend is carrying a knife, can contact Fearless, the youth arm of Crimestoppers, anonymously online through www.fearless.org and potentially help to save a life.