Shocking pictures show the rapid decline of a teacher and mother-of-two who is now an on-the-run cocaine dealer after her marriage collapsed and she turned to drugs.

Angela Davey, 38, won a scholarship to the £14,562-a-year Norwich High School for Girls and graduated from university with a History degree.

She bought a house with her husband and lived there with her children while teaching at a school for pupils with special educational needs. 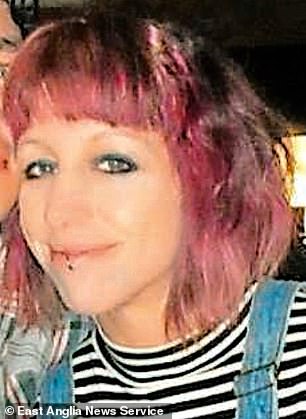 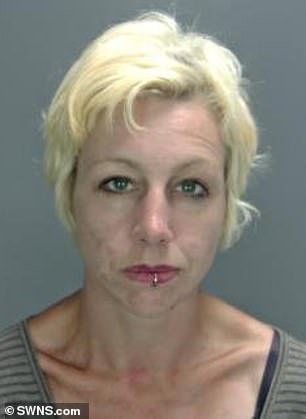 Angela Davey, 38, went on a rapid decline after becoming addicted to drugs. She is seen on the left as a teacher and mother-of-two in 2017, and on the right in a July 2018 mug shot

Her life took a turn for the worse after her marriage broke down and she became ‘vulnerable’, according to friends.

Davey is said to have turned to hard drugs after beginning a relationship with a man she met on dating app Tinder.

The once talented artist ended up losing her home and living in a camper van in Norwich while working for a county lines drug dealing gang to feed her habit.

She was arrested for dealing cocaine last February and posed for a police mugshot, revealing her ravaged and drug addled features.

The picture is in stark contrast to an image posted on Facebook less than a year earlier in 2017 showing her smiling and fresh faced.

Davey admitted dealing cocaine at a hearing at Norwich Crown Court on October 15 when she was living in a tent, but she then absconded.

Norfolk Constabulary released her mugshot when she was named as one of the force’s ten most wanted people last November.

Davey was still on the run last Monday when three people associated with the gang she had links to were jailed for a total of 11 years.

A childhood friend has now issued a heartfelt plea for her to give herself up and salvage her life by getting clean of drugs and accepting her sentence.

The 39-year-old friend, who asked not to be named, said: ‘If she continues in this lifestyle she will die.’

Describing her as ‘bright’ and ‘incredibly intelligent’, the friend said: ‘It is a real waste, an absolute waste.

‘To us she is a very ill, very vulnerable woman who was not brought up into this lifestyle.

‘She was a normal person, a mum, career focused. She was not who you would imagine taking this path in life.

The friend added: ‘We see that being in prison could potentially be her only way out of her current situation and her only chance at being well. 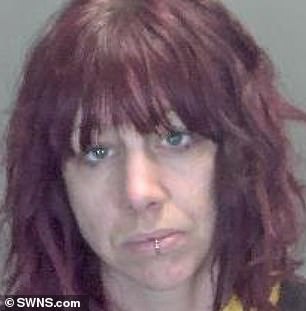 Davey is said to have turned to hard drugs after beginning a relationship with a man she met on dating app Tinder. She is seen in February 2018 after being arrested for dealing cocaine

‘There are so many people left broken hearted by this. If she continues in this lifestyle she will die, and there has got to be something that can salvage her.

‘I am angry with her but I still love her, and I am desperately worried that one day we will hear she is dead.’

The friend recalled how Davey earned a Postgraduate Certificate in Education at the University of East Anglia and trained as a history teacher at the Hewett School in Norwich.

She later taught at the Clare School, a specialist ‘physical and sensory’ complex needs school in Norwich. But a school newsletter dated July 2015, stated she was ‘moving on to pastures new’

Davey left her last permanent address, a semi-detached house in Wall Road, Norwich, around 18 months ago.

The new occupant of the house said Davey had left artwork and memorabilia at the property, alongside drug paraphernalia and needles.

The 40-year-old who asked to remain anonymous said she thought Davey was a ‘victim’ of drugs and her new relationship.

She said: ‘By the time we moved in everything had been stripped. There was rubbish everywhere and they had abandoned their cats.

‘I just sobbed my eyes out when I saw what had happened to her life… Seeing all the children’s stuff among all the other things from her life made me so upset. To think a life could go downhill so quickly.

‘We could see she did really love her kids because she made them so many things, but it is hard to feel sorry for her when you see the things she left in the house my child could have found.

‘I think she was a vulnerable person and she was taken advantage of, I see her as a victim.

‘It is just a tragedy of a life gone. In the end, she made the choices she did.’

David Teixeira, 19, from London, who was described in court as being the ‘branch manager’ was given three years in a young offenders’ institution at Norwich Crown Court on Monday.

The teenager was aged just 17 when he was helping to transport drugs from London to Norwich.

Jack Parrish, 26, of Norwich who carried out street dealing on a regular basis as the most heavily involved local drug user was jailed for five years.

Tara Kelf, 35, who allowed her flat in Suffolk Square, Norwich, to be used as a base and acted as a driver to pick up drugs to fund her own habit was jailed for three years.

All three admitted conspiracy to supply Class A drugs.

Judge Katharine Moore said the trio had all played a ‘significant’ role in the operation.

She added that there was evidence that the phone line used to peddle drugs had sent out bulk text messages to hundreds of users.

Teixeira was found to be carrying crack cocaine with a street value of £5,000 when he was arrested with Kelf on the A11 at Besthorpe, Norfolk.

Gavin Cowe, defending Teixeira, described him as a courier, bringing drugs to Norwich.

Jonathan Goodman, defending Kelf, said she had a full-time career until she got involved in Class A drugs which led her into getting drawn into the operation.

Mr Goodman said she had been vulnerable and was badly beaten at one point when she tried to stop others using her flat for dealing.

But he said she was now free of drugs and living with her family and doing voluntary work.

Mark Roochove, defending Parrish, said that he had become addicted to heroin but had now kicked his addiction and had made good use of his time on remand.

She also has links in Thrapston, Northamptonshire, or may have travelled to London.

Anyone who may have seen or knows of her whereabouts, should contact Norfolk Police on 101. Alternatively contact Crimestoppers anonymously on 0800 555 111.