New York: An obscure Hong Kong telecommunications company has emerged as the centrepiece of an explosive bid by United States prosecutors to have a top Chinese telco executive extradited to the US from Canada to face charges.

The proceedings offered the first detailed look at why the US is trying to have Meng, the daughter of Huawai's founder, brought to America to face charges.

The US argues that Huwawei used a shell company based in Hong Kong called Skycom to access the Iranian market and breach US sanctions. 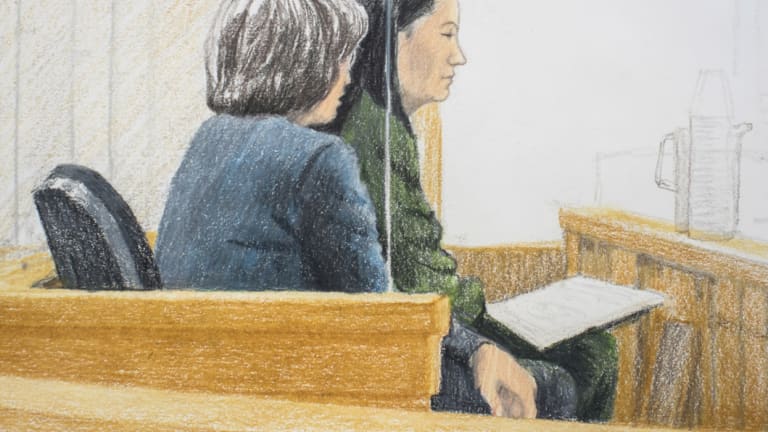 In this courtroom sketch, Meng Wanzhou, right, the chief financial officer of Huawei Technologies, sits beside a translator during a bail hearing at British Columbia Supreme Court in Vancouver.Credit:AP

Huawei is the world's biggest supplier of network gear used by phone and internet companies and long has been seen as a front for spying by the Chinese military or security services.

According to Reuters, Meng served on the board of Skycom between February 2008 and April 2009, and there were other close financial ties between the two companies.

Prosecutors argued that banks had expressed concern about the relationship between Huawei and SkyCom, but Meng assured them the two companies were separate – a claim they say amounts to fraud.

"Ms Meng personally represented to those banks that Skycom and Huawei were separate, when in fact they were not separate," Gibb-Carsley said.

Meng's lawyers said Huawei once owned Skycom but sold its shares in the company around 2009, before the company allegedly tried to sell embargoed Hewlett-Packard computer equipment to an Iranian company.

Prosecutors argue a PowerPoint presentation by Meng in 2013, which suggested the companies were not separate entities, shows this is not true.

"This PowerPoint is from 2013," Meng’s lawyer David Martin said. "If Huawei and its employees were engaged in this activity, I ask rhetorically: Why has this company not been charged?"

The hearings adjourned without a decision by the judge on whether Meng should be granted bail.

Prosecutors said Meng was a flight risk because she has vast financial resources and has a motive to flee Canada because she faces fraud charges in the US that could bring up to 30 years in prison.

Her lawyers countered that she should not be denied bail simply because she is wealthy, and said she has longstanding connections to Canada.

They also argued that it would cause major embarrassment to her father's company if she were to flee Canada and that her family would not want to "lose face".

“Ms. Meng will remain here,” Martin told the court. “She has a home, her husband is here, her daughter is at school but transferred to this place.”

He said Meng would agree to wear an ankle monitor and submit her passports to authorities.

Meng will remain in custody until Monday at the earliest, when the bail proceedings will recommence.

Meng was detained on the same day that US President Donald Trump and Chinese President Xi Jinping met at the Group of 20 summit in Argentina and agreed to a cease-fire in their trade war.

After stocks plunged on Thursday amid fears Meng's arrest could derail the trade negotiations, Trump projected confidence on Friday.

Chinese officials have also said that trade talks would continue despite the US's extradition bid.

White House economic adviser Larry Kudlow told Fox Business on Friday that Huawei had violated US sanctions on Iran. "They had been warned, and finally we had to prosecute that," he said.

He dismissed speculation that Meng's arrest was a deliberate ploy to gain leverage over China in trade talks and said that Trump did not know the arrest was coming.

Amanda DeBusk, chair of international trade practice at global law firm Dechert, said Washington and Beijing are locked in a clash between the world's two largest economies for economic and political dominance for decades to come.

"It's a much broader issue than just a trade dispute," DeBusk said. "It pulls in: Who is going to be the world leader essentially. … It's a Cold War situation."

It's much broader than just a trade dispute. It pulls in: Who is going to be the world leader essentially. It's a Cold War situation.

Gregory Jaeger, special counsel at the Stroock law firm and a former Justice Department trial attorney, said: "What's getting lost in the initial frenzy here is that Huawei has been in the crosshairs of US regulators for some time.

"This is the culmination of what is likely to be a fairly lengthy investigation."