Shakira is finding light in her music amid her painful split from her ex Gerard Piqué, which she describes as "the darkest hour in my life." The 45-year-old Columbian superstar is breaking her silence in her first interview since announcing her split in a joint statement with Piqué in June. The exes share sons Milan, 9, and Sasha, 7, and while they were never married, were together for 12 years.

Calling the very public split "incredibly difficult," Shakira opens up about navigating it all in her new cover story for Elle magazine.

"I’ve tried to conceal the situation in front of my kids. I try to do it and to protect them, because that’s my number one mission in life," she tells the magazine of her sons. "But then they hear things in school from their friends or they come across some disagreeable, unpleasant news online, and it just affects them, you know?"

She says that the relationship with Piqué that once felt "sacred" has been "turned into something vulgarized and cheapened" by the scandalous headlines surrounding the split, calling it "probably the darkest hour of my life." While she chooses not to discuss Piqué's romance with new girlfriend, Clara Chia, or allegations that he cheated on her, Shakira does say that her priority is raising their children as co-parents.

"Regardless of how things ended or how Gerard and I feel about each other as ex-partners, he is the father of my children," she tells the magazine. "We have a job to do for these two incredible boys, and I have faith that we will figure out what is best for their future, their own dreams in life, and what is a fair solution for everyone involved. And I hope and would appreciate if we were given the space to do that privately." 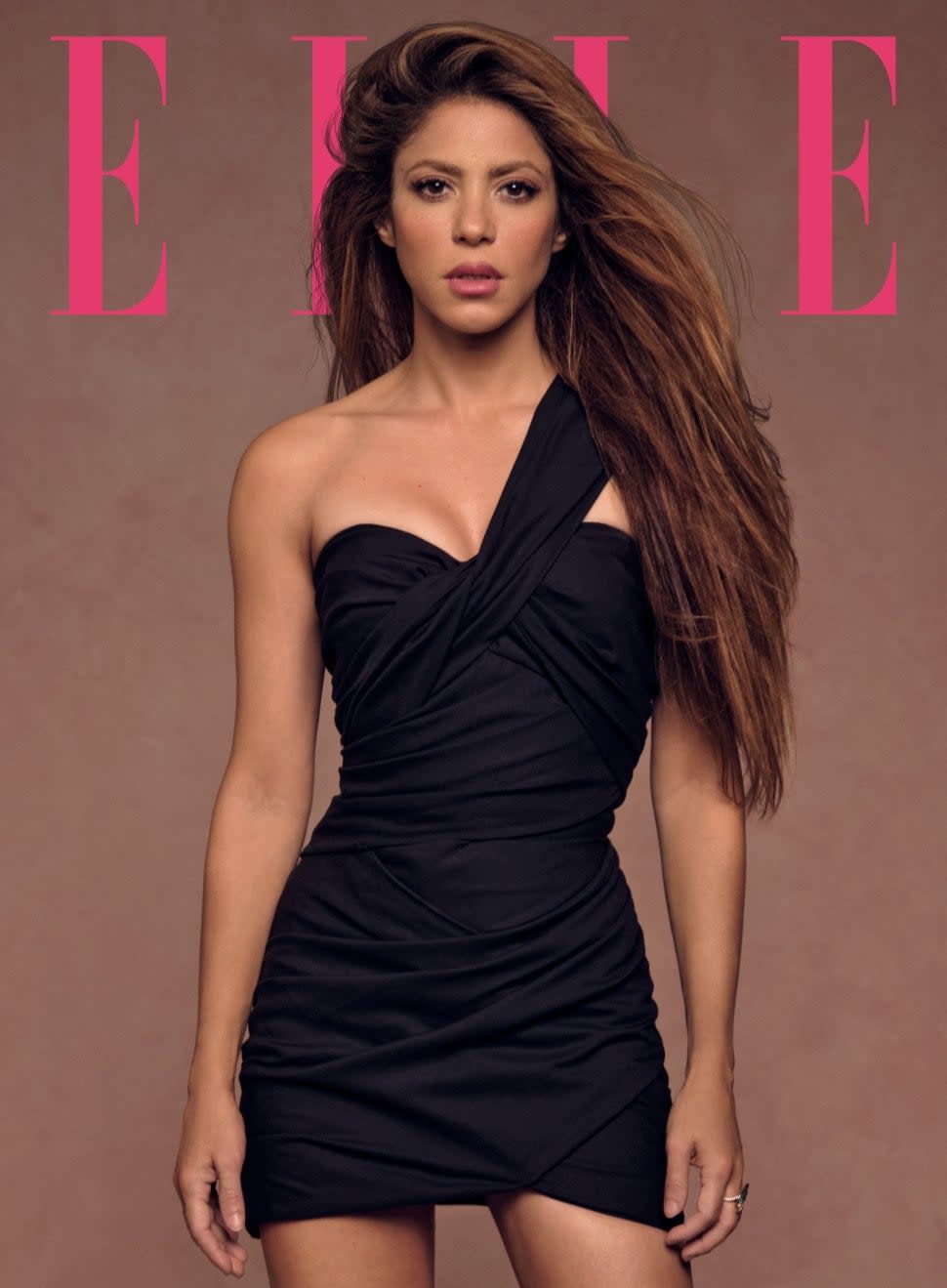 When asked about what ultimately led her to split from Piqué, Shakira seems to cite the sacrifices she made career-wise for their family. Her soccer star ex plays for FC Barcelona, causing the family to be based in Barcelona, Spain.

"I put my career in second gear and I came to Spain, to support him so he could play football and win titles," she says. "And it was a sacrifice of love. Thanks to that, my kids were able to have a present mom, and I have this amazing bond with them that is unbreakable and that sustains us."

While she is putting her children first, Shakira is also channeling her pain into her new music. She is preparing to release her first album in five years. Calling the writing process "therapeutic," she adds, "In my case, I think that writing music is like going to the shrink, only cheaper [laughs]. It just helps me process my emotions and make sense of them. And it helps me to heal. I think it’s the best medicine, and along with the love of my family and my kids that sustains me, music and writing music is definitely one of those tools — one of the few tools I have for survival in extreme conditions."

In addition to dealing with the split, Shakira's family life has also been a challenge after her father, William Mebarak Chadid, came to Barcelona, Spain, to help her family amid the breakup only to fall and suffer a subdural hematoma, a condition where the blood vessel in the space between the skull and the brain is damaged.

"He had brain surgery. And then a week later, he fell again and broke many bones in his face," Shakira shares.

Throughout all these struggles, Shakira says she has received support from many of her famous friends.

"For example, will.i.am. He regularly checks in with me, and one day he even sent me a beautiful prayer, praying for my kids and for me to find peace," she shares. "Chris Martin is always checking in and telling me that he’s there for me, anything I need. Juan Luis Guerra. Alejandro Sanz."

In the candid interview, Shakira also commented on her Spanish tax fraud case. Prosecutors in Spain are seeking a prison term of eight years and two months, as well as a fine of about $25 million, if the singer is convicted in her expected tax fraud trial, the Associated Press reported in July. The six-count indictment against the singer accuses her of failing to pay the Spanish government about $15 million in taxes between 2012 and 2014, per the outlet. Though Shakira listed her official residence those years as the Bahamas, prosecutors allege that she spent more than half that time in Spain and should've paid taxes in the country.

Shakira's reps previously told the AP that the singer had rejected a plea deal and instead opted for a trial. The statement reads, "[Shakira] trusts her innocence and chooses to leave the issue in the hands of the law."

Shakira further elaborated on her decision to fight the accusations in a trial.

"Because I have to fight for what I believe; because these are false accusations," Shakira says. "First of all, I didn’t spend 183 days per year at that time at all. I was busy fulfilling my professional commitments around the world. Second, I’ve paid everything they claimed I owed, even before they filed a lawsuit. So as of today, I owe zero to them. And finally, I was advised by one of the four biggest tax specialist firms in the world, PricewaterhouseCoopers, so I was confident that I was doing things correctly and transparently from day one."

"However, even without evidence to support these fictional claims, as they usually do, they’ve resorted to a salacious press campaign to try to sway people, and apply pressure in the media along with the threat of reputational damage in order to coerce settlement agreements," she also claims. "But I’m confident that I have enough proof to support my case and that justice will prevail in my favor."