Several climbers are feared to be caught up in an avalanche on Ben Nevis, say police

Several climbers are feared to have been caught up in an avalanche on Ben Nevis, the UK’s highest mountain.

The Inverness-based Coastguard search and rescue helicopter, Lochaber Mountain Rescue Team and an air ambulance have been sent to Ben Nevis.

Police Scotland said several people were involved in the incident in a gully on the 4411foot-high peak. 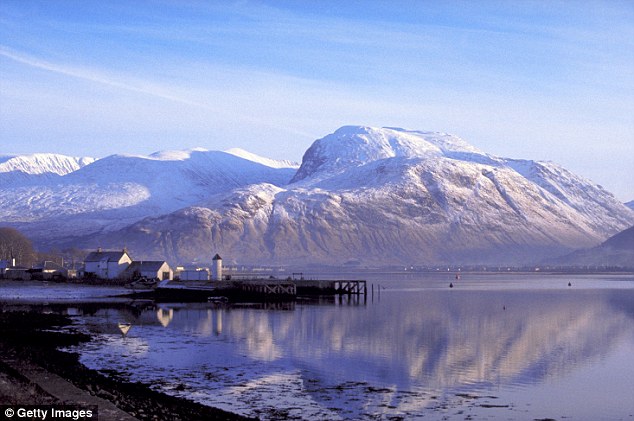 An avalanche took place on Ben Nevis (pictured in a file photo) at around 11.50am, a Police Scotland spokesman said

The Scottish Avalanche Information Service had assessed the potential avalanche risk in Lochaber, where Ben Nevis is, as ‘high’ on Monday.

Police Scotland said: ‘We were made aware of an avalanche on Ben Nevis shortly after 11:50 this morning.

‘Police Scotland is currently coordinating the mountain rescue response to this incident and is supporting partners at the scene. No further details are available at this time.’

There have been eight deaths on Scotland’s mountains this winter – but none thought to be due to avalanche.

During the winter of 2012-13, eight people died because of avalanches.

The latest mountain victim of this winter was a climber rescued after spending a freezing night on a Highland peak on Saturday.

At first it was feared that the 57-year-old and his 49-year-old companion had been caught up in a massive avalanche in Glen Coe.

But it later emerged that they were found several hundred yards away from where it was thought they had been climbing.

Police Scotland said that both climbers were part of a larger group from Nottinghamshire.

The older man was airlifted to Aberdeen Royal Infirmary where he died.

His companion was taken to Belford Hospital in Fort William where his condition is described as ‘stable and non life threatening.’

They had both been climbing Boomerang Gully on 3658-ft high Stob Coire nan Lochan. It was feared they had been caught up in a large avalanche in the gully which was recorded on Friday – they day of their ascent.

A six hour search – involving nearly 20 members of Glencoe Mountain Rescue Team and a Coastguard helicopter – ended in dangerous conditions at 2am on Saturday with no sign of the pair.

But a massive resumed search, involving four mountain rescue teams, and two helicopters found the men – the first at noon and the other 30 minutes later.

John Stevenson, leader of Lochaber MRT, said: ‘The conditions are very treacherous at the moment. We have gone from no snow – even on the top of Ben Nevis – to fresh snow, making it very avalanche prone, especially the areas where there is windslab.

‘If you have got caught up in an avalanche – after about 15 minutes you are in trouble, but people have survived for many hours, depending on the snow and finding an air pocket. But you have to be very lucky. The trouble with Scottish snow is that it is usually wet and can freeze like concrete around you.’

Ironically the fewest number of main winter avalanches have been officially recorded in Scotland’s mountains.

The Scottish Avalanche Information Service said that a lack of snow had produced less than 60 snow slides by the end of February – the lowest in the organisation’s 30 years.

Mark Diggins, co-ordinator of the SAIS, said by this stage he would have expected more than 200 avalanches. But by today there have been just 74.

‘It’s very low, but it reflects the winter we have had with little snow,’ he said.

‘It has been a very warm winter. It has also been the driest winter in over 70 years. However winter is back at least this week with low temperatures, especially with added wind chill.

‘January and February is usually the peak time for avalanches, so this winter is very low.

‘The changing conditions have made forecasting more challenging because the dynamics are changing with more extremes of weather.

The SAIS began on December 14 and ends on April 15.

The country’s vital winter avalanche service for walkers and climbers still warned of the risk of human-triggered snow slides.

It said 20 people in total were caught up in such avalanches during its 2017/18 season.

Some walkers and climbers came close to white death on Scotland’s mountains last winter, according to its report.

They had ‘very lucky escapes’ after being caught in avalanches.

Of this number, 230 were natural and/or cornice triggered. Cornices are large overhanging ledges of snow.

Thirty avalanches were triggered by people who were walking, skiing or climbing in the mountains.

There were no fatalities due to avalanche activity recorded during the season, SAIS said.

But it added: ‘Some avalanche occurrences were minor, in that small releases occurred, but others were more significant and resulted in people being carried down by the avalanche, some with very lucky escapes.’

Every winter, SAIS assesses avalanche hazards and provides daily information on the stability of snowpack in the six mountain areas.

Hillwalkers, climbers and skiers use the information to help them plan trips.