BREAKING NEWS: Trump ditches $5.7 billion wall demand and says he will take a ‘pro-rated down payment’ in return for ending the shutdown – but Pelosi immediately says ‘that’s not a reasonable agreement’

President Trump climbed down from his $5.7 billion demand for a border wall on Thursday as his proposal to reopen the government failed in the U.S. Senate.

Trump says he would take a ‘pro-rated down payment’ on the wall. His spokeswoman described it as a ‘large down payment’ in a statement immediately preceding his remarks.

Vice President Mike Pence presumably delivered the message to lawmakers when he was on the Hill earlier in the afternoon.

The president claimed that he technically ‘won’ the vote that failed in Cabinet Room remarks. It didn’t hit a 60-vote threshold necessary to overcome a filibuster.

Responding immediately, Pelosi said of the ‘down payment’ on the House floor: ‘That is not a reasonable agreement.’

CNN reported that the president was preparing to issue a proclamation declaring a national emergency.

His acting chief of staff Mick Mulvaney told DailyMail.com on Saturday that it is the White House’s belief that the president has that power but Trump didn’t want to.

Both President Donald Trump’s and House Democrats’ plans to reopen the government failed Thursday as the back-to-back votes went down in flames in the Senate, leaving no end to the government shutdown in sight.

Leader Mitch McConnell and Senator Chuck Schumer are meeting now to see whether or not they can work out of the deadlock. As was made clear to Senator Lindsay Graham, the 3 week CR would only work if there is a large down payment on the wall.

The lack of support for the separate bills was predicted yet it played out against high-drama.

About two dozen House Democrats, including rising star Alexandria Ocasio-Cortez and civil rights legend John Lewis, marched across the Capitol and into the Senate chamber to watch the vote while Vice President Mike Pence huddled with Republican lawmakers in a room across the hall.

Trump’s plan to reopen the government failed 50-47 and the Democrats’ proposal failed 52-44, more ‘yes’ votes that the president’s bill netted.

Six Republicans crossed over to support the Democrats: Lamar Alexander of Tennessee, Susan Collins of Maine, Cory Gardner of Colorado, Johnny Isakson of Georgia, Lisa Murkowski of Alaska and Mitt Romney of Utah.

Each plan needed 60 votes to advance in the legislative process.

Trump repeatedly claimed he ‘won’ the vote, even though it fell short of the 60. 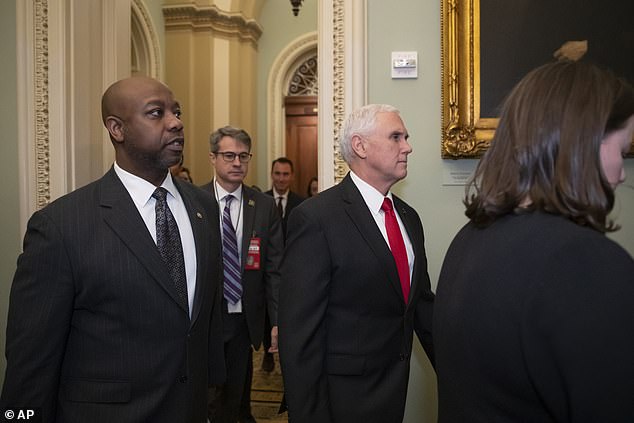 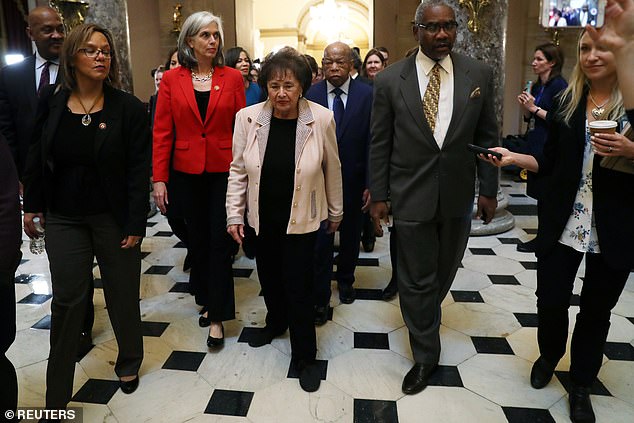 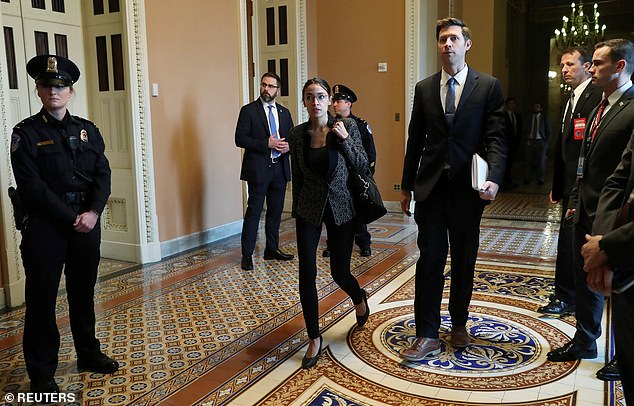 Rep. Alexandria Ocasio-Cortez walks to the Senate side of the U.S. Capitol to watch the vote

House Democrats are expected to drop another plan in the coming hours: one that would offer around $5 billion in border security measures but zero dollars for Trump’s wall.

Pence gave senators no indication of what the president would accept to reopen the government when he met with them.

‘He did not,’ Republican Sen. John Kennedy told reporters after the meeting.

Sen. Lindsey Graham, a Republican close to the president, took to the Senate floor after the vote to say he had just spoke with Trump and discussions were underway about a three-week continuing resolution to reopen the government.

‘Just got off the phone with the president. I told him we’re talking about a three-week CR and all of us believe if we had three weeks with the government open … that we could find a way forward to produce a bill that he could sign and that would be good for everyone in the country but we need that opportunity. He gave me some indications of what he wants in a three week CR that would be good faith, moving forward, that I thought were imminently feasible,’ he said. 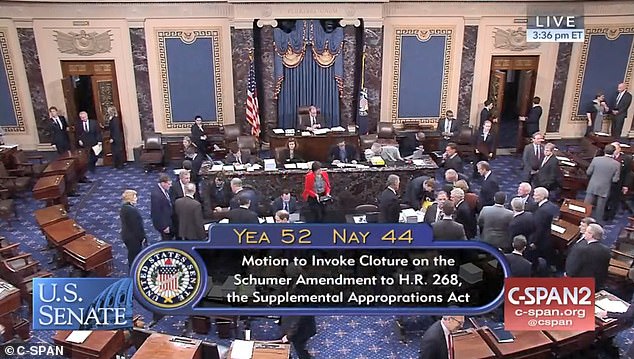 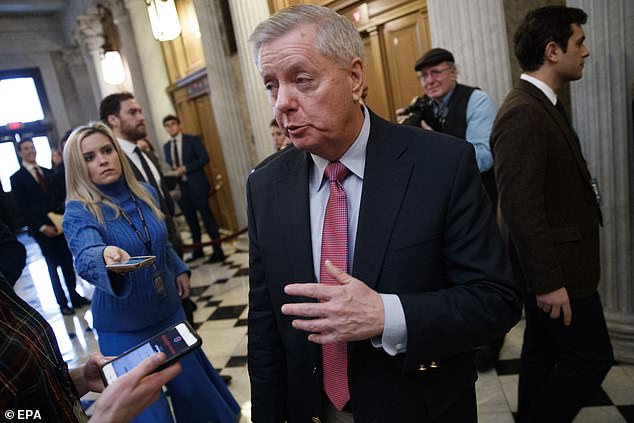 Sen. Lindsey Graham said he talked to President Trump about a three-week plan 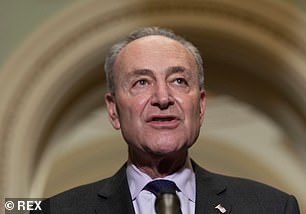 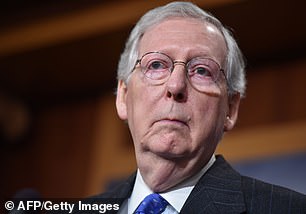 ‘To my Democratic friends, money for a barrier is required to get this done. It will not be a concrete wall and the money will be a program to a [Department of Homeland Security] plan that all of you know about and have been briefed on and should approve. You’re not giving President Trump a bunch of money to do anyway he wants to with. He’s got to spend it on a plan the professionals have come up with,’ Graham said.

‘I want to let the public know I have never been more optimistic than I am now that we can open up the government for three weeks,’ he added.

White House press secretary Sarah Sanders said in a statement that the three-week plan would only work if there was a ‘large down payment’ on Trump’s $5.7 billion border wall.

‘Leader Mitch McConnell and Senator Chuck Schumer are meeting now to see whether or not they can work out of the deadlock. As was made clear to Senator Lindsay Graham, the 3 week CR would only work if there is a large down payment on the wall,’ she said in a statement.

Earlier Thursday Trump once again insisted on a border wall as his price for reopening the government – and vowed he will not ‘cave’ to Democrats amid reports they are preparing to offer more money for security but no funds for his wall.

Trump fired off his latest defense of his wall in a tweet sent as Speaker Nancy Pelosi took questions from reporters on Capitol Hill – and said without a border wall ‘it doesn’t work.’

‘Nancy just said she ‘just doesn’t understand why?’ Very simply, without a Wall it all doesn’t work. Our Country has a chance to greatly reduce Crime, Human Trafficking, Gangs and Drugs. Should have been done for decades. We will not Cave!,’ he tweeted.

He acknowledged on Thursday afternoon that he had not spoken to Pelosi since he walked out of a meeting. 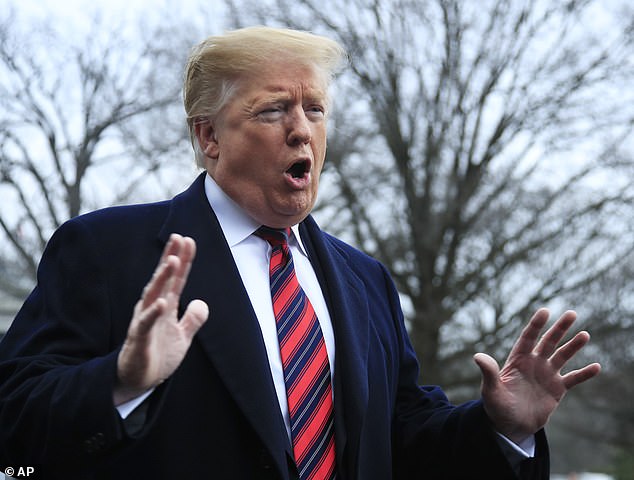 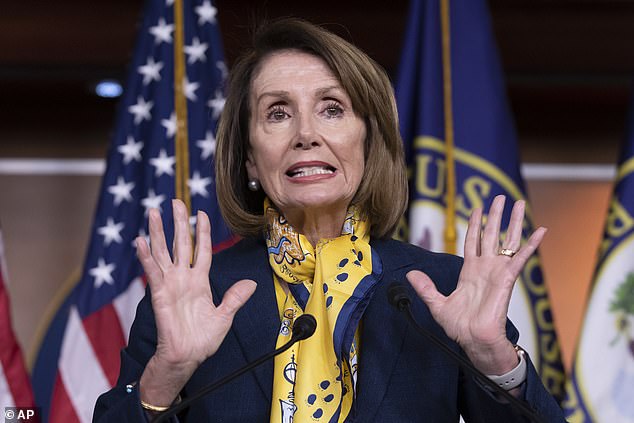 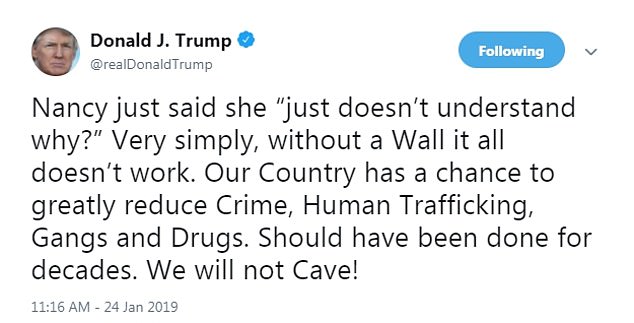 Trump vowed he ‘will not cave’ on the wall

His line in the sand came before the Senate held the votes holds on the two separate legislative packages: One includes Trump’s proposal for protection from deportation for Dreams and the $5.7 billion for his border wall; the other is on Democrats’ plan to reopen the government that does not fund the wall.

Pelosi, before the Senate votes, acknowledged House Democrats were considering another proposal to reopen the government.

‘Within our $49 billion homeland security bill there will be some provisions,’ Pelosi said Thursday morning but declined to get into specific details. She said work was still being done on the legislation.

‘We are prepared to spend a very substantial sum of money because we share the view that the border needs to be secure,’ he said. 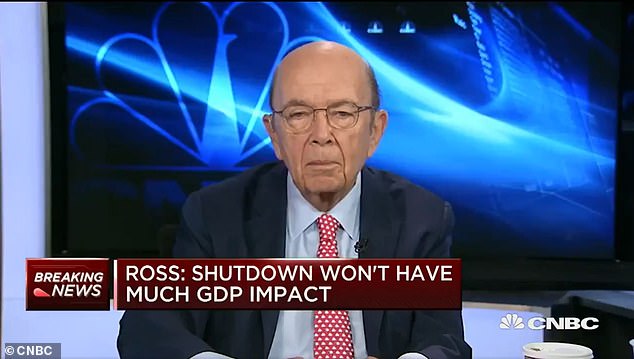 The Democratic version of the bill to fund the Department of Homeland Security could include at least $5 billion for border protection efforts like new technology and more law enforcement agents – but nothing for Trump’s border wall.

Amid those reports Trump took to twitter to attack Pelosi and vow not to cave in on his border wall.

But he misquoted Pelosi when he wrote: ‘Nancy just said she ‘just doesn’t understand why?’

The speaker was actually quoting the president’s Commerce Secretary when she said that.

Wilbur Ross said on CNBC Thursday morning he didn’t understand why furloughed federal workers had to go to food banks and suggested they borrow from banks to make ends meet until they get a paycheck.

‘I know they are, and I don’t really quite understand why,’ Ross said. ‘Because, as I mentioned before, the obligations that they would undertake, say borrowing from a bank or a credit union are in effect federally guaranteed.’

Pelosi was criticizing his ‘let them eat cake’ attitude with her remark. 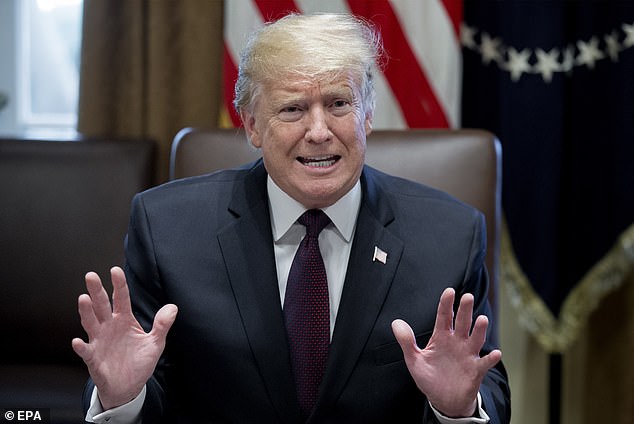 The longest government shutdown in U.S. history is expected to continue its painful stretch as the Senate takes up bills that would end the shutdown, but neither is expected to get the needed 60 votes

‘They have Wilbur Ross saying he just doesn’t understand why when he was asked about people going into food lines and pantries and the rest, he said he doesn’t understand why they have to do that. I don’t know is this the let them eat cake kind of attitude or call your father money or this is character building for you, it’s all going to end up very well,’ she said.

The latest salvos – on Day 24 of the shutdown – came hours after Trump relented on the State of the Union address after essentially being disinvited by Pelosi to give his speech until after the shutdown is ended.

Pelosi acknowledged that retreat in her remarks Thursday. She called the speech ‘so unimportant to the American people,’ who she said should be ‘hostages to the president’s applause line in a campaign speech.’

‘Thank goodness we have put that matter to rest and we can get on to the subject at hand, open up government so we can negotiate how best to protect our borders,’ she noted. 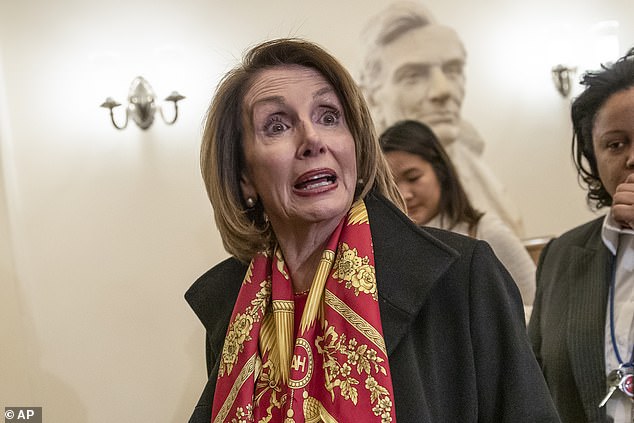 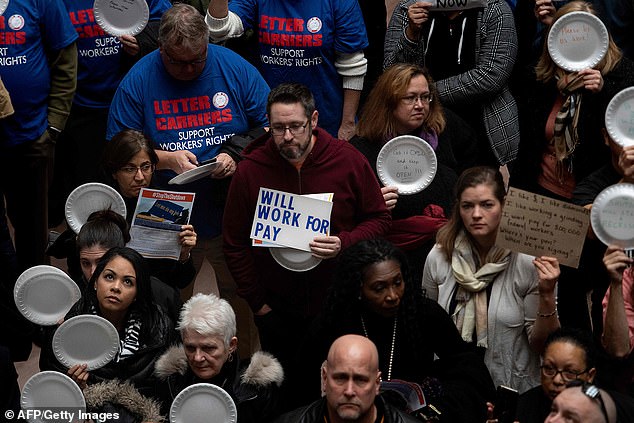 A federal worker stands with a placard reading ‘Will Work For Pay’ as other federal employees stage a rally to call for a vote on the shutdown on Capitol Hill in Washington, DC, on January 23, 2019

But amid the lack of an immediate legislative solution Trump is continuing to insist on a border wall, tweeting Thursday that without a wall ‘there cannot be safety and security at the Border or for the U.S.A.’

‘BUILD THE WALL AND CRIME WILL FALL!’ Trump wrote, continuing to link immigration and crime. There were not talks set between Trump and congressional leaders on ending the shutdown – hours after Trump blinked and said he would not deliver a scheduled State of the Union Address in the House chamber after Speaker Nancy Pelosi withdrew his invitation until the government was reopened.

The House is scheduled to leave town Thursday afternoon – in a sign leaders didn’t believe the Senate would send them any legislation to vote on – but Hoyer warned members Thursday morning they could be brought back anytime – including on Saturday or Sunday – if there is a deal to vote on.

Senate Majority Leader Mitch McConnell has refused to take up individual spending bills that would reopen the government if Trump will not promise to sign them.

A poll by The Associated Press-NORC Center for Public Affairs Research released Wednesday showed 60 percent of Americans blamed the president for the shutdown about double the number of people who blamed Democrats.