SEBASTIAN SHAKESPEARE: Another Royal Family drama as Fergie turns TV producer for a historical series on the dynasty of Prince Albert

As her ex-husband Prince Andrew tries to downplay his ten-year association with the late sex offender Jeffrey Epstein, Sarah, Duchess of York is concentrating on a more wholesome royal drama.

I can disclose that Fergie has set up a television production company — and her debut project will be a historical series about Prince Albert’s Saxe-Coburg-Gotha dynasty.

‘The first drama will be about the incredible true story of the most powerful forgotten family in history,’ one of the Duchess’s friends tells me.

The series will be called The Greater Good, and will ‘shed light on the importance of the Saxe-Coburg-Gotha family and its impact on uniting Europe over a 100-year time span’.

The show will focus on a single family, with little but good looks to its name, that climbed from nowhere to sit on nearly all the thrones of Europe.

Sarah has established the company, Coat Productions, with a friend from the fashion world, Cavan Mahony, who was a guest at Princess Eugenie’s wedding at St George’s Chapel, Windsor Castle, last year.

Fergie has some previous, achieving critical and commercial success with the 2009 film The Young Victoria, of which she was a producer.

It was Sarah who conceived the idea for the film based on the early years of Queen Victoria.

She had been interested in the monarch since her marriage to Andrew, a great-great-great-grandson of Victoria and Prince Albert.

Legendary director Martin Scorsese was brought in as a fellow producer.

The German name Saxe- Coburg-Gotha came into the British Royal Family in 1840 when Victoria wed her cousin Albert, son of Ernst, Duke of Saxe-Coburg & Gotha.

As a British dynasty, it was short-lived, surviving the nine-year reign of Edward VII, and the first seven years of his son, George V.

Then, following the outbreak of World War I, George replaced the title with the more English-sounding House of Windsor in 1917.

Whoever thought that an MP would give Taylor Swift a run for her money? Pete Wishart, the SNP politician who played keyboards with Scottish folk rock band Runrig, boasts that he is a chart topper.

‘Runrig is No.1 in the German album charts,’ he says of the band’s final release before their retirement. ‘What a way to end an incredible musical legacy.’

Which has better odds — a Runrig reunion or Scotland leaving the UK?

Eddie shows off his board walk 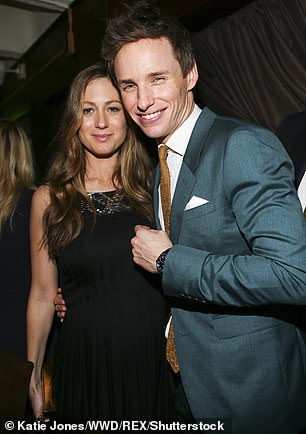 Eddie Redmayne, 37, and his wife Hannah Bagshawe, 35, enjoyed a holiday in Positano on Italy’s Amalfi coast

Who’s that about to make a big splash with his pals in the Med?

Evidently, there’s more to the chap in the blue trunks, Old Etonian Oscar-winner Eddie Redmayne, than his talent in front of the cameras.

Enjoying a holiday in Positano on Italy’s Amalfi coast, Redmayne, 37, nonchalantly executed a backward flip off the stern of a yacht — to an appreciative audience of his wife, Hannah Bagshawe, 35, and a select handful of friends.

Once on board again, he allowed Hannah to re-apply sunscreen to his back — a wise move for the fair-skinned Redmayne, whose bookworm pallor suggested that, unlike his well-tanned chums, he’d been locked below deck studying a script. 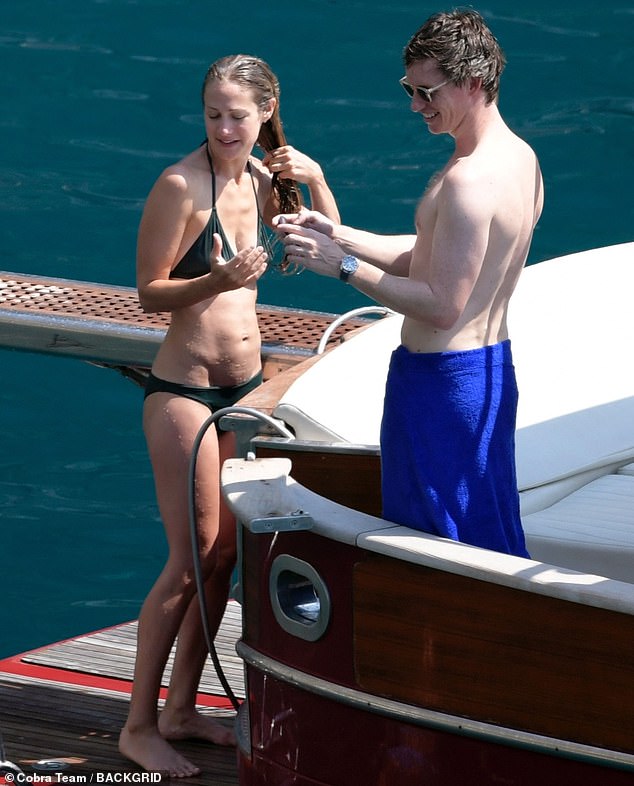 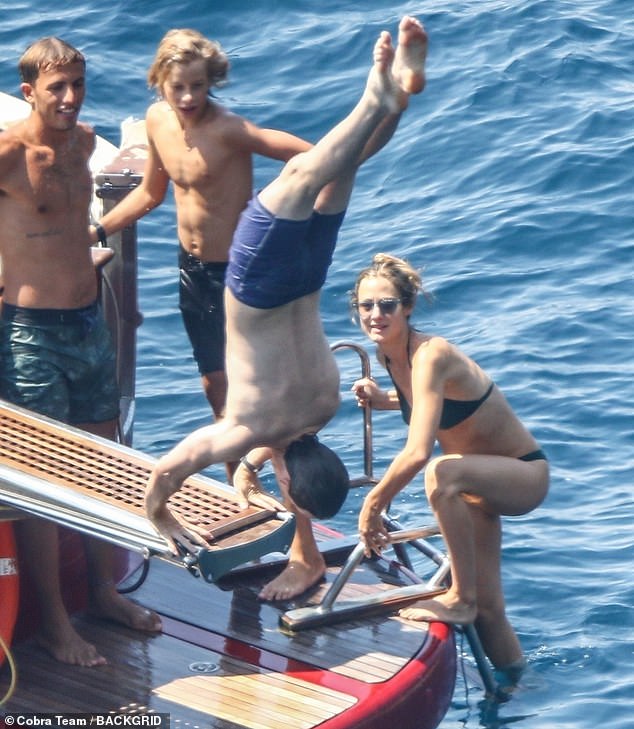 The happy couple looked relaxed on their luxury yacht as Eddie and Hannah dived into the sea. Eddie was keen to show off his diving skills, doing a back flip into the sea while Hannah looked on impressed

Her on-screen marriage to Robert Lindsay helped make My Family one of the most popular BBC sitcoms of all time, but Zoe Wanamaker reveals she was paid less than half her co-star’s wages.

‘Women are paid less than men and I don’t think that’s ever going to change,’ the actress fumes.

‘It’s disgraceful. It’s been a hard struggle for women to call it out. With My Family, I discovered Robert was getting twice as much as I was, if not more.

‘We talked about it, because in those days you could.’ Addressing the issue today is difficult. She adds: ‘Nobody would like to say how much they’re earning because it’s not polite.’

Cressida is wild about her Harry 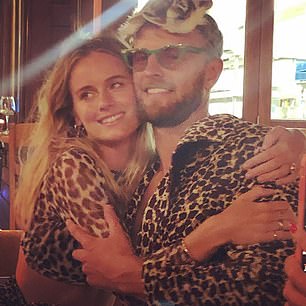 If Cressida Bonas had got engaged to her long-term boyfriend Prince Harry, she would have been thrust into a world of twinsets and pearls, footmen and royal etiquette.

But having accepted a proposal from another Harry — estate agent Harry Wentworth-Stanley — the actress is free to embrace her wild side.

Cressida wore a leopard-print ensemble as she beamed next to her husband-to-be — also in matching animal print — on holiday in the Caribbean.

‘Cressie has no doubt she made the right choice,’ one of her friends tells me.

Sherlock star Martin Freeman admits to being worried that he’s past his best — at the age of 47.

Speaking about his lead role in the forthcoming romcom Ode To Joy, he admits: ‘There were times where I thought, ‘Am I too old to play this?’ The older you get, after a while, does an audience go, ‘Listen, man, you should’ve sorted this s*** out by now.’

Will you have as much sympathy as someone who’s 27?’

Game Of Thrones star Nathalie Emmanuel (who came to a sticky end as Missandei) celebrated her West Indian roots as she partied at Notting Hill Carnival in leggings featuring the flag of Dominica.

One of the 30-year-old actress’s grandparents came from the island. Nathalie danced with her boyfriend, the Riviera star Alex Lanipekun, 38, whom she has been courting for over a year.

‘It’s tough to find people who are super-secure and encourage you to fly,’ she said. 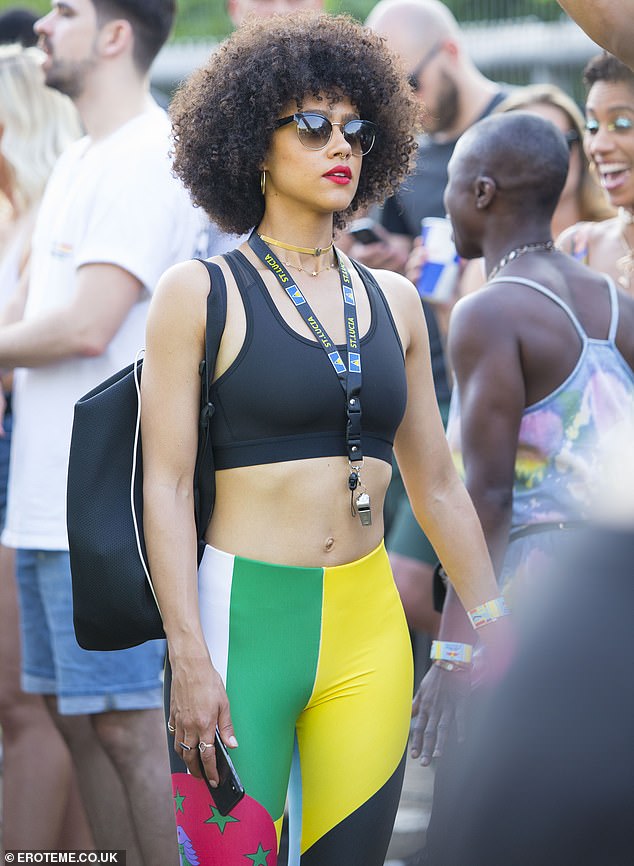