Beirut: A three-day rescue operation to save what was believed to be a "miracle" child survivor of the Beirut explosion from beneath the rubble of a building was called off on Saturday (Sunday AEST).

A month after the deadly explosion ripped apart Beirut, many were pinning their hopes on the find after a Chilean rescue team and their border collie dog detected signs of life in the destroyed building. 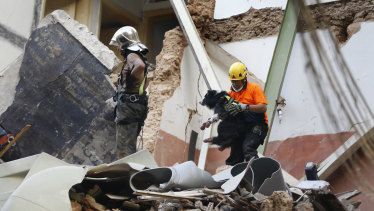 A Chilean rescuer, right, holds a sniffer dog as they search in the rubble of a collapsed building in Beirut after detecting a sign of life one month after the massive port blast.Credit:AP

However, Francisco Lermanta, the head of volunteer group Topos Chile, told reporters that they had combed through 95 per cent of the building over three days and there was no longer any sign of life. It appeared that initial signs were a false alarm.

"At least we don't have another name to add to that horrible list of the dead," said Melissa Fathallah, an activist who helped organise the rescue effort.

"We were already beyond angry with our so-called government."

The rescue team's equipment was detecting breaths from what appeared to be a small body.

But the breaths were from rescuers trying to get to that area of the building.