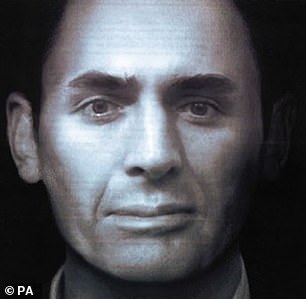 The Metropolitan Police released this facial reconstruction of a man whose body was found inside a sleeping bag in a house in Forest Gate, east London on April 29, 2016

The face of a mystery man believed to have been murdered more than a decade ago has been revealed after scientists created the image from remains found at a disused factory.

Detectives have released an image of the facial reconstruction in a bid to identify the victim, who was found in a blue sleeping bag inside the building in Forest Gate, east London, on April 29 2016.

Part of a black bin bag had been placed over his head and body, while the skull had a visible crack along the left side.

Officers working with archaeologists removed more than 100 industrial rubble sacks from the scene, recovering almost all of the man’s skeletal remains after sifting through the soil and debris.

A post-mortem and anthropological examination revealed he had suffered blunt trauma wounds to the skull.

Police believe the victim was attacked in a first-floor room of the four-storey factory after finding blood matching his DNA.

But his DNA did not match records on the national database and even professors from the Natural History Museum were unable to establish its origin.

Professor Gordon Cook, from the Scottish Universities Environmental Research Centre, carried out a radiocarbon dating of bones teeth and hair and found the man was aged between 29 and 35 when he was killed between 2003 and 2006.

An examination of his remains found the victim was between 5ft 4ins and 5ft 8ins tall and could have been of eastern, southern or central Asian, Indian subcontinent, European, North African or Middle Eastern descent.

A pouch of chewing tobacco found in the sleeping bag is only officially sold in the Indian subcontinent, while clothing is also linked to the same area.

Police are asking for help from the public to identify the facial reconstruction of the skull created by Dundee University.

Detective Inspector Darren Jones, from Scotland Yard, said: “I would urge people reading this appeal, especially those living in the area where this man’s remains were found, to look closely at the reconstruction and think about whether you may have seen him. Does he look familiar to you?”