Thousands more people were displaced, according to Lennox Mabaso, a government spokesman in KwaZulu-Natal province, where the worst flooding occurred. Officials were providing urgent humanitarian support, he added, and had not yet fully quantified the damage from the storm. 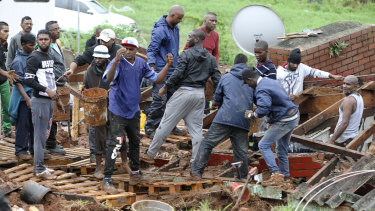 About 254 millimetres of rain fell on the provincial capital, Durban, within 48 hours from Monday to Wednesday, according to the South African Weather Service, with even higher figures in surrounding areas.

Videos shared on Twitter showed homes crumbling in front of onlookers and cars strewn in gullies where entire roads had given way.

"It looks like a tornado has hit," said Paul Herbst, a spokesman for IPSS Medical Rescue, a private ambulance service in the region. "Entire houses have been taken completely off their foundations and washed away. The flood and mud damage is absolutely extraordinary."

Herbst, who grew up in the area, added: "We haven't ever seen destruction like this."

The South African President Cyril Ramaphosa visited the province on Wednesday, cutting short a trip to Cairo, where African Union leaders had been discussing upheavals in Sudan and Libya.

"People jumped into the mud, into flowing water, to save their children and loved ones," he told reporters, commending the efforts of rescuers.

Some of the worst-hit areas in Durban were informal settlements, said Dr Imtiaz Sooliman from Gift of the Givers, a local disaster-response non-profit organisation. Around 200 homes were washed away in an area known as Quarry Road, he said. In Umlazi, one of South Africa's biggest townships, at least 500 people were displaced.

"People in informal settlements suddenly had rivers gushing next to them," Sooliman said.

Phindile Phewa, a radio host who lives in Umlazi, watched a home crumble on Tuesday morning.

"It makes one think, oh my God, what's going to happen next?" Phewa said. "Before you sleep, you check the walls. Are they cracking?"

Forecasters said that the flooding was caused by a cut-off low pressure system, a type of storm often associated with severe weather.

Flooding was also reported in other parts of the country as the storm travelled eastward on Tuesday. In Port Saint Johns, a rural town in the Eastern Cape, the military sent troops to help with rescue and evacuations. Floods were also expected in drier regions farther north, authorities said.

On Wednesday, the provincial health minister in KwaZulu-Natal called on families to identity flood victims at mortuaries. The death toll was expected to rise as floodwaters subsided and more people were reported missing.

The floods came a few days after a separate storm caused a church to collapse in KwaZulu-Natal, killing 13 people. A memorial for those victims had been planned for Thursday, Mabaso, the government spokesman, said.

Back to the Future opens with eighties teenager Marty McFly entering Doc Brown’s lab, before later helping the eccentric old...