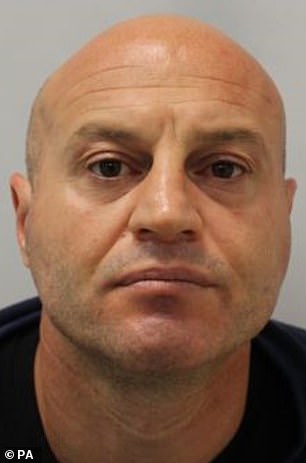 Mane Driza has been jailed for his fifth killing today. He murdered his ex-flatmate in London in a row over his wedding ring after being allowed to stay in the UK by claiming he was fleeing Kosovo

An Albanian serial killer nicknamed ‘Tony Montana’ has been jailed for at least 20 years for hacking his flatmate to death with a cheese knife.

Hitman Mane Driza, 41, used a pick axe handle, lock knife and cheese knife to inflict more than 120 wounds on his flatmate Stefan Mone in a ‘brutal and merciless’ attack.

Handing him a life sentence today, Judge Sarah Munro QC said: ‘This is a very unusual, if not unique case.’

Mr Mone’s six-month pregnant girlfriend Zoe Blay found his body the following day but could only identify him by his distinctive belt buckle.

The last time she had seen him was at a pre-natal appointment in hospital, where they had discussed the birth of their baby.

Driza had fled his homeland in 1997 after shooting dead a father and son Elmaz and Lavdosh Kannani in their village of Bishan to settle a deadly blood feud.

He arrived in the UK the same year claiming to be a 17-year-old orphan and was given leave to remain until December 2001 as an unaccompanied minor fleeing Kosovo.

After his marriage to a Brazilian cleaner ended, Driza moved in with fellow Albanian Mr Mone – who he went on to kill. 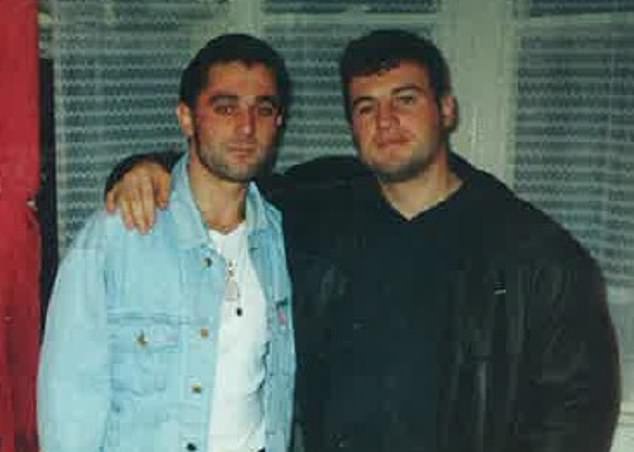 The killer (right) and his victim, Stefan Mone, (left) had been friends but fell out over Driza’s claims Mr Mone had stolen his wedding ring 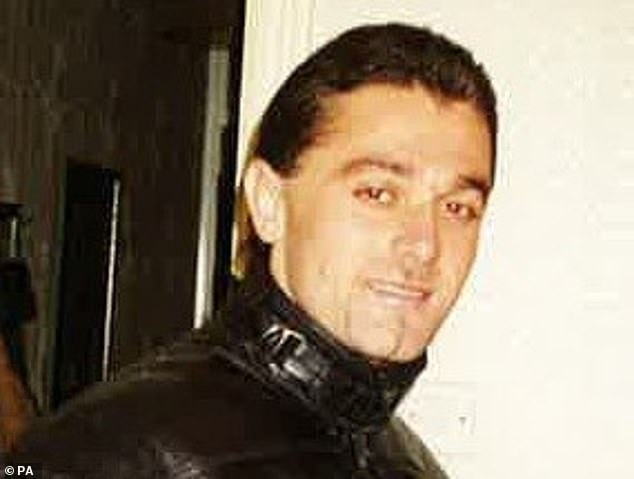 The murder was motivated by Driza’s claims Mr Mone, 23, had stolen his wedding ring from his marriage to Roselane Driza.

Prosecutor Tim Cray QC told the court: ‘The scene inside that house in Wembley was horrific… Stefan had been stabbed and beaten to death.’

The tip of a lock-knife was found embedded in the back of his skull.

1997 – Driza had shot dead a father and son Lavdosh Kanani, 33, and Elmaz Kanani, 71, in his Albanian village. Driza then fled Albanian and came to Britain, telling authorities he was a teenage orhpan

June 22, 1999 – Driza attacks and kills his flatmate, Stefan Bledar Mone, in Wembley, inflicting 120 wounds. He then flees to Italy to escape justice.

2002 – Driza is jailed in Italy for 30 years for conspiracy to murder and attempted murder.

May 2018 – After long-running legal proceedings, Driza is extradited to the UK to face charges over Mr Mone’s murder.

Within hours of the London murder, Driza was on a flight to Milan from Stansted Airport.

Just under six months later he was languishing in an Italian jail for blasting two other men, Maskaj Artant and Blusaj Albert, to death at a bar in Catania, Sicily.

A third man only survived when his gun jammed. Driza was jailed for 20 years by an Italian court.

When officers from Scotland Yard flew out to speak to Driza, he said he came to Britain ‘to escape from the Albanian police and also from the relatives of his victims in Albania who wanted to take their revenge on him’.

He said Mr Mone was a paid assassin and he moved in with him to gain his trust.

On the day of the killing, Driza said Mr Mone came at him with a knife and baseball bat so he hit him over the head, but had no memory of what happened next.

His lawyers claimed he could not be guilty if that first blow was the cause of Mr Mone’s death and was delivered in self-defence.

But after hearing of the number of injuries his victim had sustained, a jury took just two-and-a-half hours to convict him.

Judge Sarah Munro QC remanded him in custody ahead of sentence on 3 April. 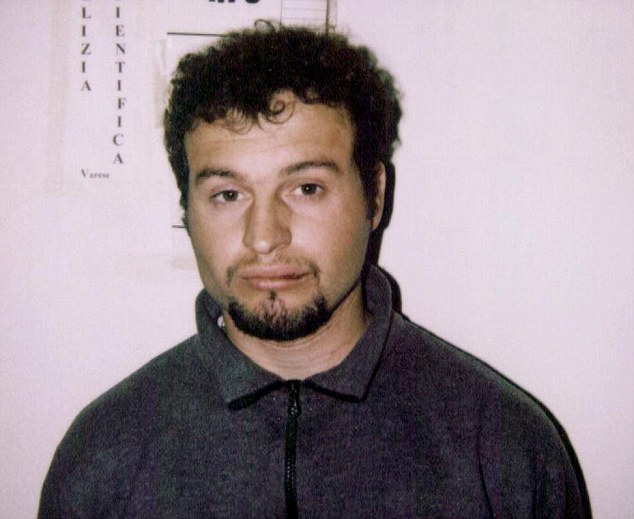 Driza fled to Italy after the London murder, where he killed two more people, and was jailed for 20 years

Details of Driza’s marriage to Brazilian cleaner Roselane Driza, emerged during her blackmail trial at the Old Bailey in 2006.

Within months of arriving in the UK as Roselane Nonato on a tourist visa on February 6, 1998, she had met the Albanian at a London nightclub.

He told her he was Catholic like her, and had been granted refugee status after fleeing from war-torn Kosovo.

But after they married in April 1999 it emerged he was a Albanian hitman and was Muslim rather than Catholic.

They separated two months later, when Roselane discovered he had lied to her about his background. 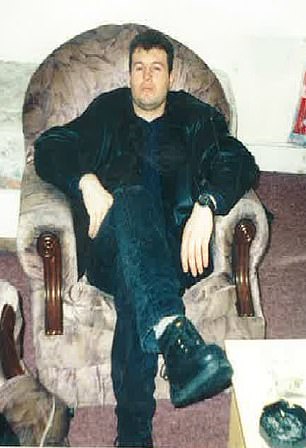 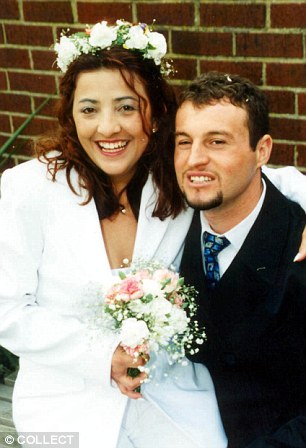 Speaking after the guilty verdict was returned, Scotland Yard’s Detective Inspector Garry Moncrieff said: ‘Driza has proven himself to be an extremely violent individual who has no hesitation in dealing with any issue or problem he encounters in life by killing. He has freely admitted all the murders he has committed but never shown remorse.

‘Stefan, a fellow Albanian, had been his friend but there was a disagreement over a wedding ring that went missing; Driza took the theft of this ring as symbolic and an attack on his manhood.

‘Driza dealt with that disagreement in the only way he knew how, with brutal violence. He wasn’t just trying to teach Stefan a lesson that day, he went out to kill him.

‘Stefan was murdered 20 years ago. Driza was very quickly identified as the chief suspect but it has taken many years to bring him before the UK courts to face justice.

‘This case shows the determination and tenacity of the Met Police in ensuring those who commit violence are dealt with properly, no matter how long ago offences occurred.

Stefan’s former girlfriend Zoe Blay said: ‘I cannot put into words or begin to explain that day I found Stefan’s body, it has traumatised me to this day, I suffer with flashbacks and nightmares. No one would want to see their loved one laying there like that.

‘I was extremely scared after that; I moved from the city I had called home my whole life to a city where I only knew two people just to feel safe.

‘I may have felt safe but it added to my depression and stress levels, not good when you are six months pregnant.

‘I so wanted Stefan there when I gave birth to our son, to be proud of me, you stole that from me. 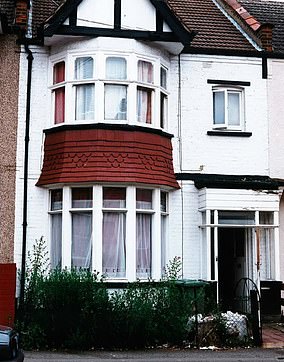 Mr Mone’s body was discovered by his six-month pregnant girlfriend, Zoe Blay the next day, when she went to his Wembley flat

‘…Christopher our loving, kind and beautiful son grew up asking about his father from a very young age, I always told him Daddy is in heaven.

‘When Christopher was about four years old his goldfish died, we said a few words and then flushed the goldfish down the toilet so he could go to heaven.

‘A few days later I found Christopher on the bathroom floor talking to his daddy in the toilet. He thought this was where heaven was, this was truly heart-breaking to watch.

‘When Christopher was 14 years of age I told him what happened to his father, I gave him newspaper articles that I had kept. When I returned home after giving evidence, Christopher asked me how it went but no more than that.

‘I was shocked and thought he would have been more interested and wanted some questions answered but no nothing.

‘It wasn’t till later on that day when speaking to his girlfriend she told me that whenever Christopher thinks about his father and what happened to him, his heart breaks all over again, he gets palpitations and feels like he is going to be sick.

‘This is why he does not want to know the full extent of that cruel day you took his father away, the fear his father must have felt and the degree of his father’s injuries you caused.

‘Stefan’s family, yes they have a grandson but they will never see their son again. They will never see him on his wedding day, the day he would have brought his son into the world. Stefan was cruelly robbed of this and we as a family have also been robbed.’