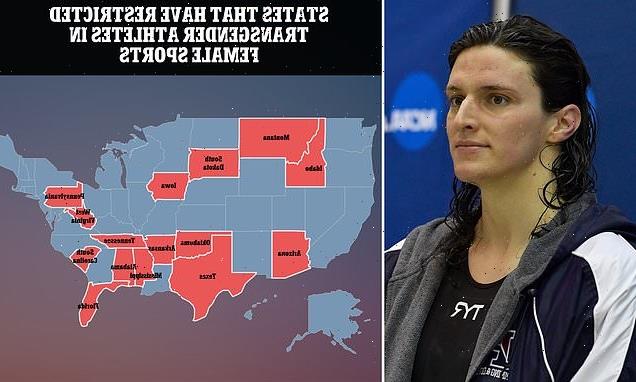 South Carolina is one step closer to banning transgender athletes from women’s sports, with the state’s House passing a bill requiring them to compete based on their assigned gender at birth.

The South Carolina House of Representatives passed the ‘Save Women’s Sports Bill’ 82-28 on Tuesday, despite the 1,000 amendments proposed by the Democrats and a marathon debate stretching for eight hours.

The Republican House majority passed the bill about 9.15pm on Tuesday – after a tornado warning saw the chamber evacuated.

The bill still has to go to the Senate, which is Republican-run, for consideration before becoming law.  The bill means athletes must compete as the gender they are assigned on their birth certificate, not the gender they identify as.

Many states have tried to pass bills banning transgender athletes in 2021, as the topic gained traction after UPenn swimmer Lia Thomas, 22, made headlines after winning the 500 yard freestyle in Atlanta in a time of 4 minutes, 33.24 seconds on last month.

Many critics claimed she had a biological advantage against the other women as she competed as a man for three colligate years. Thomas did, however, compete within the NCAA rules and had been on hormone therapy for over a year. 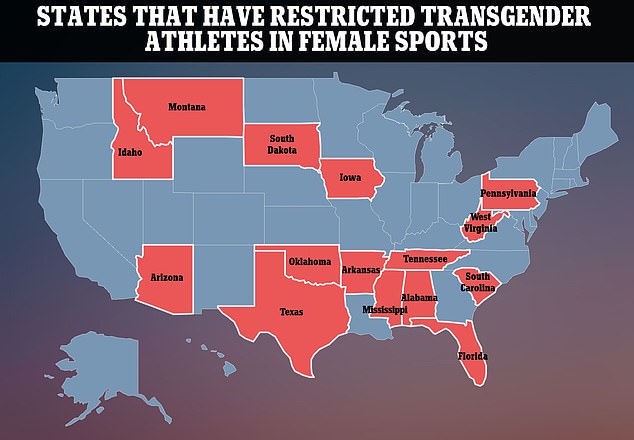 More than a dozen states have passed legislation banning transgender athletes from women’s sports. On Tuesday, South Carolina moves to join the others are it passed the Save Women’s Sport Bill after eight hours of debate. The bill will move to the GOP-led Senate, where it is expected to pass 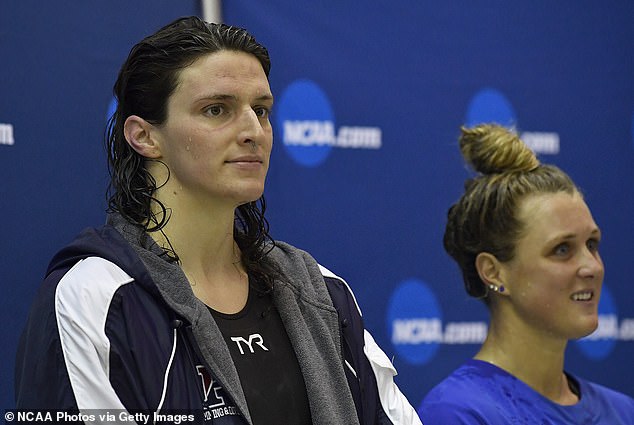 Many states attempted to pass legislation in 2021 after UPenn transgender swimmer Lia Thomas, 22, (left) made headlines as she dominated the pool

Since the end of the NCAA championship, several states and politicians have voiced their concern over the future of women’s sports and trans-female athletes.

Republican Speaker Jay Lucas tossed out nearly 600 amendment proposals on Tuesday, saying they were almost the same with only small changes like altering names of schools in each proposal.

After those rulings, Democrats pulled down even more, with the writer of most of the changes saying bringing the House to a halt for several hours was a victory.

‘Today we saw so many of my colleague stand up for people who do not often have a voice,’ said Representative John King, a Democrat from Rock Hill.

Bill sponsor Representative Ashley Trantham did take the podium just before the vote, thanking the people who have fought for two years to get the bill passed in South Carolina. It failed in a House committee in 2021.

‘It is because of your actions that South Carolina is one step closer to saving women’s sports,’ the Republican from Pelzer said.

Democrats said Republicans should be ashamed for singling out people that much of society already treats badly.

‘Leave these transgender kids alone. There are less than one percent of them,’ said Representative Krystle Matthews a Democrat from Ladson.

Some amendments by Democrats would make substantial changes to the bill like allowing a public high school to opt out of the requirements or requiring women’s sports to have the same number of assistant coaches or amenities as men’s teams.

Others would do things like rename the proposal the “Discrimination Capital of the United States Act” or name individual schools or allow school bands to only play at women’s sporting events.

Supporters of the bill mostly stayed quiet Tuesday to not prolong the debate. One amendment did pass that would create girls’ wrestling teams in high schools.

Debate was also delayed for nearly an hour after the House chamber was evacuated for a tornado warning for Columbia.

About a dozen other states have already passed similar legislation, and transgender athletes have become an issue in midterm campaigns in such states as Pennsylvania. But Republicans aren’t in lockstep, with GOP governors in Indiana and Utah vetoing bans in their states.

‘I think the NCAA ought to mind their own business,’ McMaster said when asked how he felt about the NCAA issuing a statement stating it strongly opposes having events in a discriminatory environment. 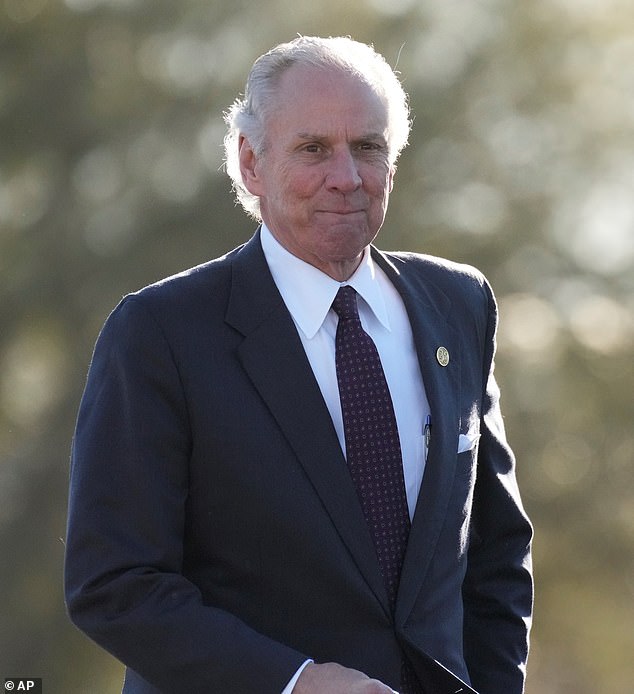 South Carolina Governor Henry McMaster blasted the NCAA, which recently announced they would bra states that had anti-trans legislation from hosting championships. The governor said: ‘I think the NCAA ought to mind their own business.’ If the Save Women’s Sports Bill passes in the Senate, it move into its final desk at McMaster’s desk to be signed into law

The NCAA said it ‘firmly and unequivocally’ supports transgender-athletes having the opportunity to compete in sports.

The Human Rights Campaign – the largest LBGTQ+ organization – condemned the bill’s passing in the House, writing in a statement on Wednesday: ‘Today, the Human Rights Campaign…condemned the South Carolina House passage of House Bill 4608, which bans transgender students from participating in school sports consistent with their gender identity. The bill now heads to the Senate for consideration.’

The organization claimed the ‘hypocrisy is on fully display’ because legislators ‘rushed [the bill] through the South Carolina House of Representatives to meet a legislative deadline of April 10th.’

‘Although the Bill is titled: “Save Women’s Sports Act,” the South Carolina House has done everything except create an equal footing for women in sports,’ it said in a statement.

The organization also claimed the state’s legislator ‘did not consider the serious consequences’ of the Save Women’s Sport Bill, as almost 50 percent of LBGTQ+ youth considered attempting suicide in the past year, it claimed.