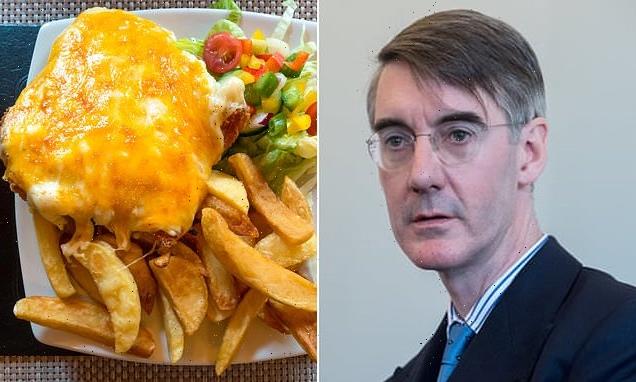 It’s Parmo-geddon! They’re an artery busting ‘delicacy’ of fried meat and cheese with up to 2,600 calories. So was it really wise for Middlesbrough to celebrate being home of ‘Parmo’? Our local expert RUTH SUNDERLAND puts the knife in

Normally I wouldn’t ally myself with Jacob Rees-Mogg in his disdain for anything hailing from my home town of Middlesbrough.

But I’m absolutely on his side about the parmo, an alleged local delicacy.

Mr Rees-Mogg — who is known to enjoy a deep-fried Mars Bar — turned up his nose because of the ‘ghastly’ garlic sauce.

That’s probably the healthiest bit of the whole calorie-oozing dish, if only the Honorable Member for the 18th century (as he’s been dubbed) did but know it.

Which is one reason why there has been such a furore — let’s call it Parmogeddon — about the new banners that have gone up promoting Middlesbrough with the boast: ‘We are parmo & chips.’

Are we? And isn’t there a tiny bit of a problem lauding a 2,600-calorie late-evening snack in a town suffering a serious obesity crisis? 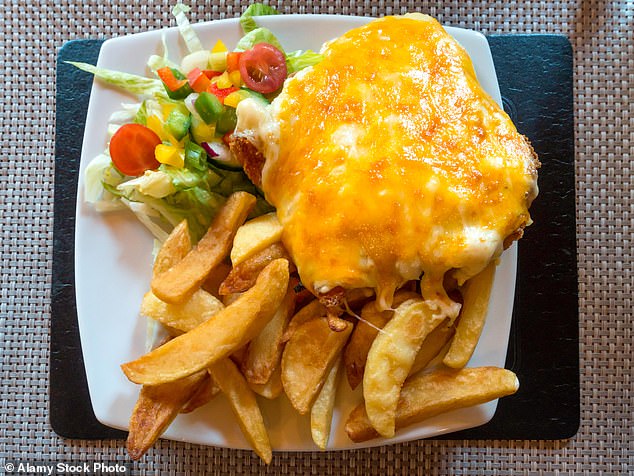 Which is one reason why there has been such a furore — let’s call it Parmogeddon — about the new banners that have gone up promoting Middlesbrough with the boast: ‘We are parmo & chips’ 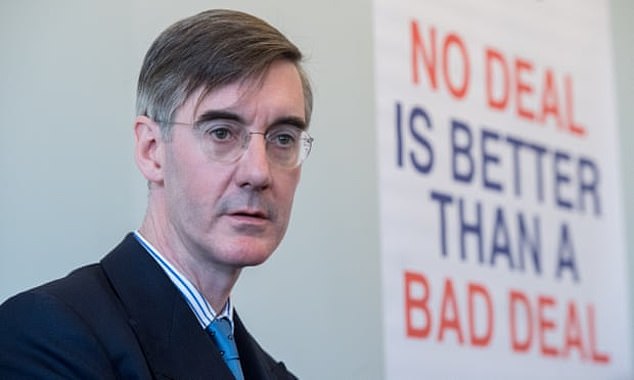 Normally I wouldn’t ally myself with Jacob Rees-Mogg in his disdain for anything hailing from my home town of Middlesbrough. But I’m absolutely on his side about the parmo, an alleged local delicacy.

For those unacquainted with the take-aways of Teesside, a parmo is a hefty deep-fried concoction of flattened meat covered in breadcrumbs, slathered with bechamel and topped with bubbling orange cheese.

Quite apart from the dietary issues, it is mystifying to me to use the chicken parmo to trumpet the town when we have far better things to boast about.

That Victorian grandee Gladstone did not need to indulge in a meaty, cheesy frenzy to be won over by Middlesbrough’s potential, so much so he described it as ‘an infant Hercules’. 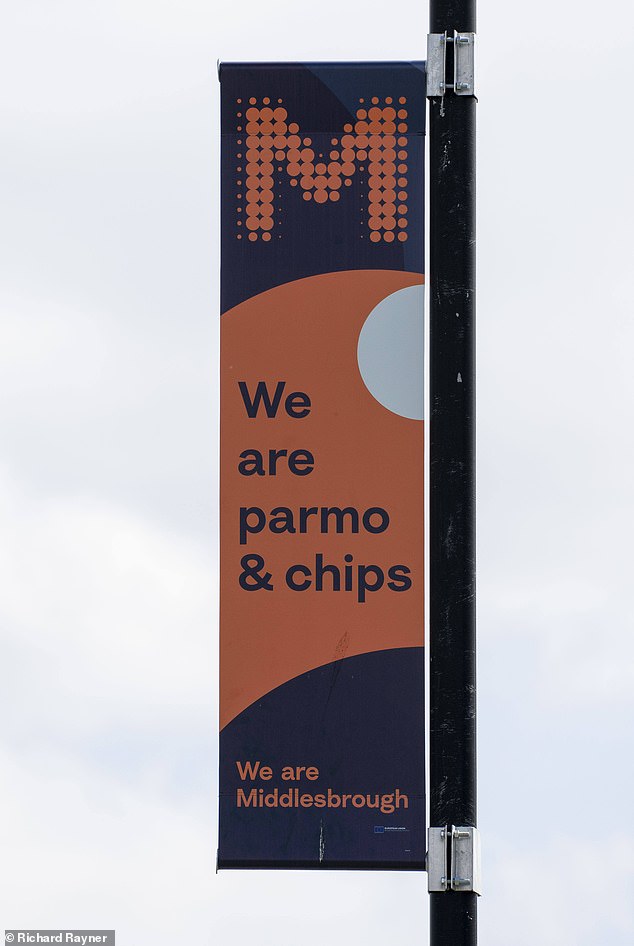 Are we? And isn’t there a tiny bit of a problem lauding a 2,600-calorie late-evening snack in a town suffering a serious obesity crisis?

When I took my niece around Churchill’s War Rooms on a visit to London, we spotted the stamp on the girders showing the steel was made by Dorman Long in Middlesbrough.

‘Your great-grandad worked there,’ I told her. ‘It was our steel that kept the roof over Churchill in the bombings.’

But it isn’t all about the old-style heavy industry, either. The area was hit hard in the 1980s recession but it is reinventing itself.

A couple of years ago I visited the site where my late father was a steelworker and met a young entrepreneur who set up a successful e-commerce company there.

Dad would have been very pleased to see his old works a hive of activity once more.

The ‘Boho’ area is home to a small but growing cluster of tech and creative firms and Teesside University is a world leader for digital and graphic design courses.

I know a lot of people dismiss Middlesbrough as a dump and over the years I’ve heard all the jibes.

That’s why it’s doubly disappointing to see the town’s complex history and culture, often troubled but always proud, reduced to a coronary-inducing snack — by its own council. 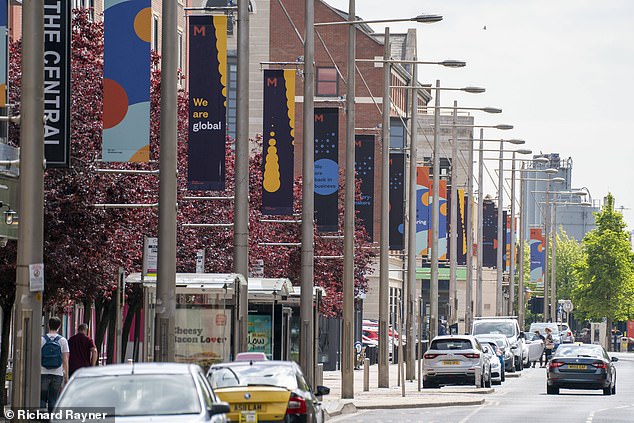 That’s why it’s doubly disappointing to see the town’s complex history and culture, often troubled but always proud, reduced to a coronary-inducing snack — by its own council

‘Embarrassing to the people of Middlesbrough’, ‘a complete waste of money’, ‘crass’ and ‘drivel’ are among the milder opinions on social media about the parmo banners, among more than 140 that have gone up as part of the ‘We Are Middlesbrough’ initiative.

‘Did they have Alan Partridge at the brainstorming session for this?’ asks one man. Good question.

Some of the banners are quite sensible, proclaiming ‘We are Determined’ and ‘We are Open’. And so they should be, at a cost of around £13,000 of taxpayers’ cash.

But a banner saying: ‘We are mint’ has also attracted criticism. (It means ‘We are fabulous,’ not ‘We are a fresh-tasting garden herb.’)

And another declaring engimatically: ‘We are, like’ has come in for a barrage of insults. It’s a reference to the way we Boro lads and lasses are addicted to saying ‘like’ at the end of every sentence, like.

I confess I don’t share the general fury at that one.

Doesn’t it channel a little of the existentialist spirit of Jean-Paul Sartre, a soupçon of Left Bank on Tees? No?

Well, surely correct usage of the comma counts for something. 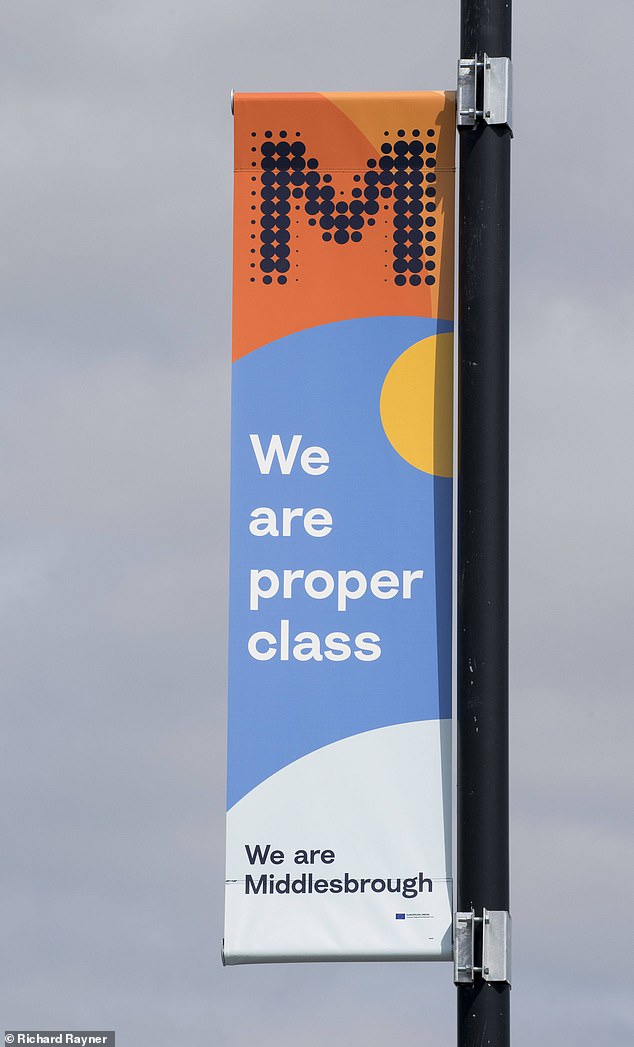 Never mind parmos — our town’s built on industrial heroism. Pictured: One of the new signs in Middlesbrough

What is even more maddening is that Middlesbrough already has a perfectly good marketing slogan: the town motto ‘Erimus’, which is Latin for ‘We shall be’ has conveyed ambition and enterprise since 1830.

I suspect the ‘brains’ behind the banner campaign think they have performed a clever update of the motto, but they should have left it well alone. As for the offending junk food, aficionados will no doubt claim parmos are delectable, particularly after a night out in the hostelries around the Linthorpe Road. I wouldn’t know.

Unusually, perhaps even uniquely for a Teessider born-and-bred, not a sliver of parmo has ever passed my lips. This is because parmo-eating featured on my mother’s long list of verboten local activities (which included saying ‘like’ at the end of sentences).

We were, you see, too posh for parmos, or at least we thought we were.

Over the past few years, this once quintessentially working-class dish has shown signs of gentrification. A contestant cooked one up on MasterChef, and you can now buy them in the hipster enclave of Hoxton in East London for £14.95.

Maybe that’s progress. But even if they invent a low-calorie version it won’t be enough to dispel my parmo-phobia.To me, the whole concept — a corrupt mutation of the perfectly good dish of veal parmigiana — is abominable. 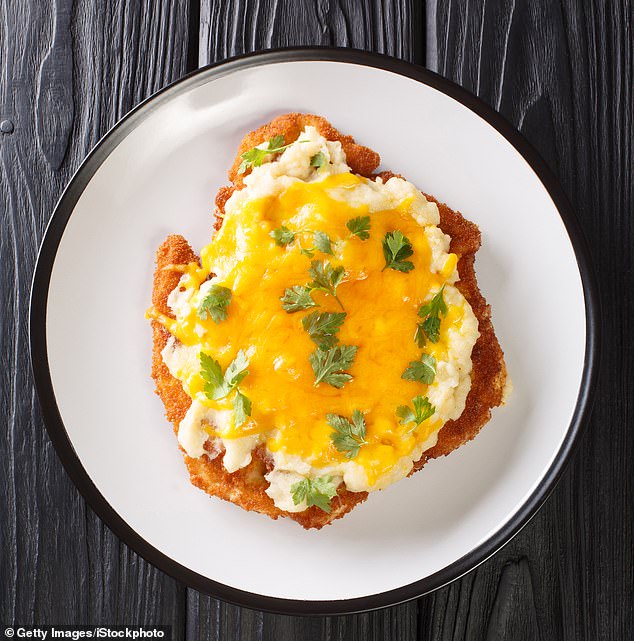 Unusually, perhaps even uniquely for a Teessider born-and-bred, not a sliver of parmo has ever passed my lips. This is because parmo-eating featured on my mother’s long list of verboten local activities (which included saying ‘like’ at the end of sentences). We were, you see, too posh for parmos, or at least we thought we were

If you find yourself on Teesside and fancy some deliciously fattening food there are better options.

Perhaps I’m biased because my Nan had a fish and chip shop on Cannon Street, the town’s spiritual heart, but I’d far rather have a piece of crispy battered cod with scraps.

Or one of Mam’s Sunday dinners, eaten at 3pm, with four Yorkshire puddings and gravy as a starter, followed by a heaving plate of roast beef and veg and a proper pud.

Or a sweet Whitby crab . . . I could go on. If you’re going to be unhealthy, at least do it with some authentic Northern grub that tastes fantastic.

For the civic grandees in Middlesbrough’s neo-Gothic town hall, it’s all a bit of a quandary.

The pro-parmo lobby will argue it is a feature of the town, that many do love tucking into them, and in moderation, why not? There are, however, very real health concerns about poor diet in the region. When I was growing up, older ladies might be majestically upholstered, but most adults were slim and the vast majority of kids were skinny.

Not so now. Almost 70 per cent of adults are classed as overweight or obese and according to 2019 figures, one in eight children in Middlesbrough starts school obese.

By the time they leave primary school, that has almost doubled to a quarter. These are truly terrifying numbers.

The parmo banners are an attempt at levity that has misfired, but there is nothing funny about putting the health of future generations at risk.

A lot is at stake for Middlesbrough in the next few years, with high hopes that the elusive economic rebirth is about to arrive.

The Treasury is opening an outpost in nearby Darlington and the Teesside Freeport will be the largest in the UK, with the potential to create thousands of jobs.

It won’t help attract inward investment if we are portrayed as a bunch of inarticulate parmo-guzzlers, like. And thankfully Middlesbrough Council has now seen sense and is taking the banners down.

Middlesbrough should be given the positive portrayal it deserves. Erimus: we shall be many things, but not an obesity bomb on a plate.

How to make the ‘perfect’ parmo

1. Make the bechamel sauce by melting the butter in a saucepan and adding the flour, stirring to make a roux. When smooth, remove from the heat and gradually whisk in the milk, then return to the heat and bring to a gentle simmer.

2. Simmer for five minutes, then add the nutmeg and salt and pepper to taste. (Don’t overseason: remember the cheese will be salty.)

3. Slice the chicken breasts lengthways, then cover with cling film and beat with a rolling pin until about 1cm thick.

4. Place the flour, beaten eggs and breadcrumbs into three separate bowls, then dip the chicken breasts in each bowl in turn, starting with the flour, and place to one side.

5. In a deep saucepan, heat the oil to around 180c — or throw in a breadcrumb and see if it sizzles. Deep-fry the breaded chicken breasts for three to four minutes, turning until cooked, then set aside.

6. Set your oven grill to a high heat. Pour the bechamel sauce over each chicken breast, then top with a generous serving of grated cheese before grilling until golden.

Serve with chips and a salad.