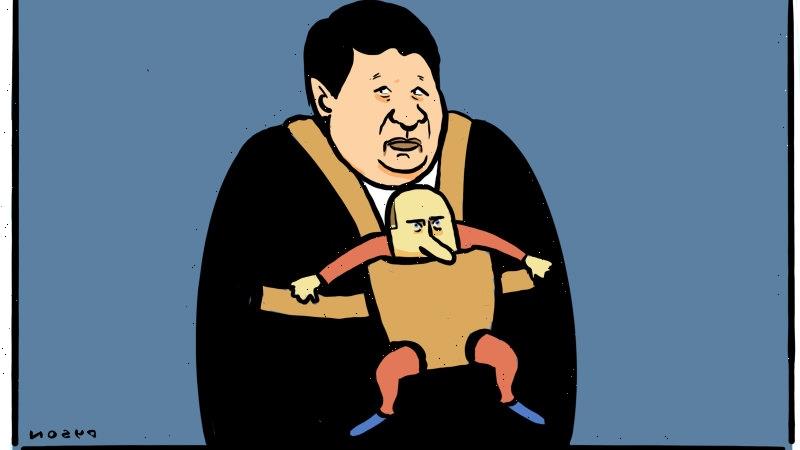 Russia is struggling to annexe Ukraine. But China is annexing Russia pretty effortlessly.

One telltale sign was the summit shenanigans at a meeting of the Shanghai Cooperation Organisation’s leaders last week. A notoriously petty Putin power play was turned against him. 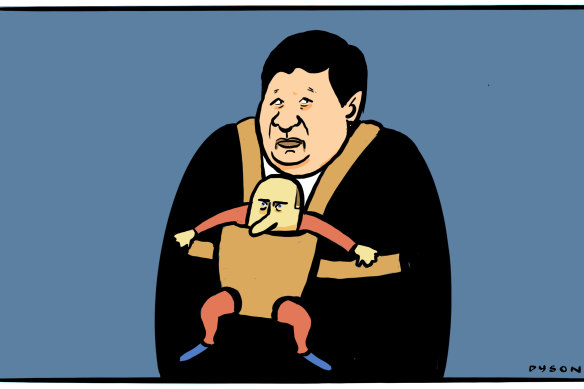 The Russian dictator often made foreign leaders suffer the humiliation of an extended wait before arriving for scheduled summits. For instance, he once kept Donald Trump waiting for 45 minutes and India’s Narendra Modi for 50. He routinely kept Ukrainian leaders waiting three or four hours. But the record was when he made German Chancellor Angela Merkel suffer an insufferable 4¼ hours.

So there was notable schadenfreude last week when four nations’ leaders made Putin wait. Modi took his opportunity to drive home Putin’s downgrading in the international order, and so did the leaders of Turkey, Azerbaijan and Kyrgyzstan.

“Putin used to make everyone wait,” observed a Ukrainian government adviser, Anton Gerashchenko. “Now he is the one waiting awkwardly. Times changed.” 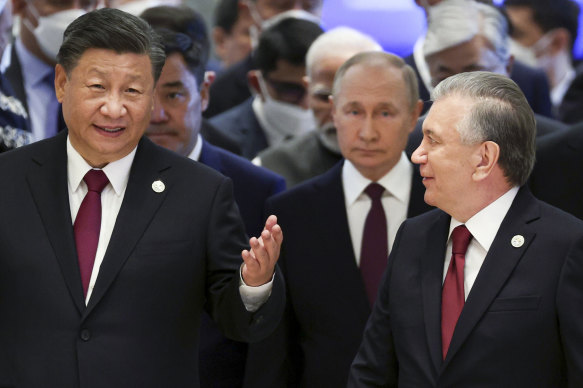 The close friendship between Xi Jinping and Vladimir Putin is being tested.Credit:AP

At home in Moscow, too, Putin’s strongman standing has been hammered down a couple of notches. After being whipped into a nationalist frenzy in support of the invasion, nationalist hardliners now are furious at Russia’s battlefield setbacks and demand a total Russian mobilisation.

Putin is “politically encircled in Moscow”, according to Ivan Krastev, chair of the Centre for Liberal Strategies in Bulgaria. The word “war” has broken into state-owned media in violation of the Kremlin’s insistence that the invasion was merely a “special military operation” and Krastev explains the potency of this change:

“A ‘special military operation’ is something to be cheered, while war is something to be feared,” he writes in the Financial Times. Special operations are “conflicts which can be lost without a population really noticing. But when you lose a war you risk losing your country.”

And Putin his power. His dilemma is that he needs to demonstrate battlefield success but does not want full mobilisation Why not? “For the same reason that he was reluctant to impose mandatory vaccination during the COVID pandemic: the fear that such a move would expose his lack of control,” if Russians refuse en masse, says Krastev.

And Russia’s economy is labouring under the heaviest sanctions it has faced since the Cold War. It has not collapsed in the way that some analysts predicted at the outset of the war in February, but the impact has been real, harmful and compounding.

The sanctions have imposed a recession that will shrink Russia’s economy by six per cent this year, according to the IMF. That’s painful but not disastrous. The main reason it’s unexpectedly mild?

While the International Energy Agency forecast Moscow would suffer a loss of three million barrels of oil exports a day under the West’s sanctions, Russian oil has continued to sell well. Because while the West largely has shunned it, China and India have shopped for it.

China’s imports of seaborne Russian Urals crude oil have boomed by 40 per cent between January and July, according to commodities consultancy Kpler. Beijing also has stepped up imports through a Siberian pipeline.

The outflow of Russian oil brings the renminbi inflow that keeps Putin’s regime afloat. This has allowed Putin to increase pensions and the minimum wage by 10 per cent, among other stimulatory state spending.

In short, as Russia staggers, China is holding it up. Overall, total Russian exports to China have burgeoned by 49 per cent between January and July to $US61.4 billion.

Analysts who describe China’s policy on the Russian invasion of Ukraine as “balanced” or “noncommittal” are overlooking Beijing’s indispensable economic underwriting of Russia’s war.

Russia’s fiscal solvency now depends on a lifeline from China, an economy 10 times bigger than Russia’s. But for Beijing, trade with Russia is peripheral – amounting to just 2 per cent of China’s total trade with the world in 2021.

Xi Jinping’s regime also supports the Russian war effort indirectly by exporting off-road vehicles for transporting command personnel, as well as drone components and naval engines, as Thomas Low and Peter W. Singer point out in a piece on the US site Defense One.

“Rather than making Russia great again,” they write, “Putin’s war in Ukraine has instead deepened Russia’s position as the clear junior partner in the Sino-Russian relationship, militarily and economically.”

Even the most recent rhetoric between the two leaders reveals the power shift. The readouts from Putin’s meeting with Xi at the Shanghai Cooperation group meeting last week “make the relationship look unbalanced, in Xi and the PRC’s favour,” remarks the US sinologist Bill Bishop in his Sinocism newsletter.

Putin publicly tugs his forelock to Xi’s “questions and your concerns” over the Ukraine war. And, in Bishop’s words, “while Putin genuflects about Taiwan and the one-China principle”, Xi offers “strong mutual support on issues concerning each other’s core interests” but no specific commitments on anything at all.

The US journal Foreign Affairs last month published an essay titled: “China’s New Vassal”. The author, Alexander Gabuev of the Carnegie Endowment think tank, wrote: “Theirs is not a relationship of equals. The Kremlin’s dependence on China will turn Russia into a useful instrument in a larger game for Zhongnanhai [the walled leadership compound in Beijing], a tremendous asset in Beijing’s competition with Washington.”

This helps explain the statement to the Financial Review two weeks ago by Ukraine’s ambassador to Australia, Vasyl Myroshnychenko: “This war depends on Xi. He’s the only one who can stop it.”

When Xi formally is endorsed by the Chinese Communist Party Congress next month to serve a third five-year term as general secretary, he will not only become the first Chinese leader since Mao to serve a third term. He will be holding Russia, once China’s tutor, now its vassal, as a trophy.

This is an undreamt-of asset for Beijing, one that only Putin’s misjudgement could have delivered.

The Opinion newsletter is a weekly wrap of views that will challenge, champion and inform your own. Sign up here.