Labour was hit by fresh Brexit splits today as a shadow minister publicly broke ranks with Jeremy Corbyn to demand a second referendum.

Shadow sports minister Rosena Allin-Khan appeared on stage to address a crowd of thousands to declare her support for the so-called People’s Vote.

But she risks sparking the fury of Mr Corbyn, who has said Labour wants a General Election, and that a second referendum is only one of the options ‘on the table’.

The Labour leader is facing mounting pressure from his own MPs to back another referendum.

But Mr Corbyn and his closest allies are hugely resistant to the move, fearing it would lose them crucial votes in the Leave-backing north and could cost them the next election. 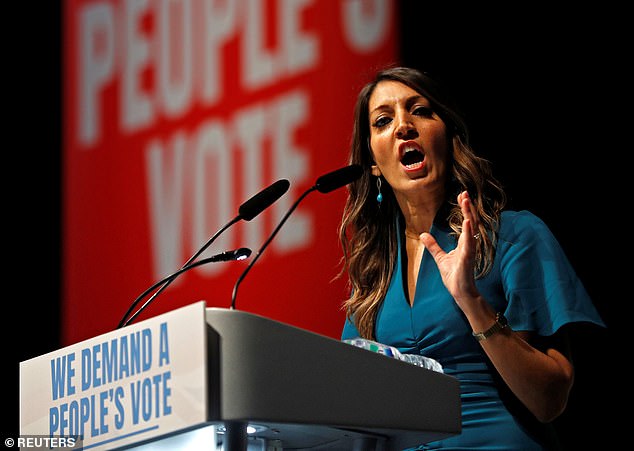 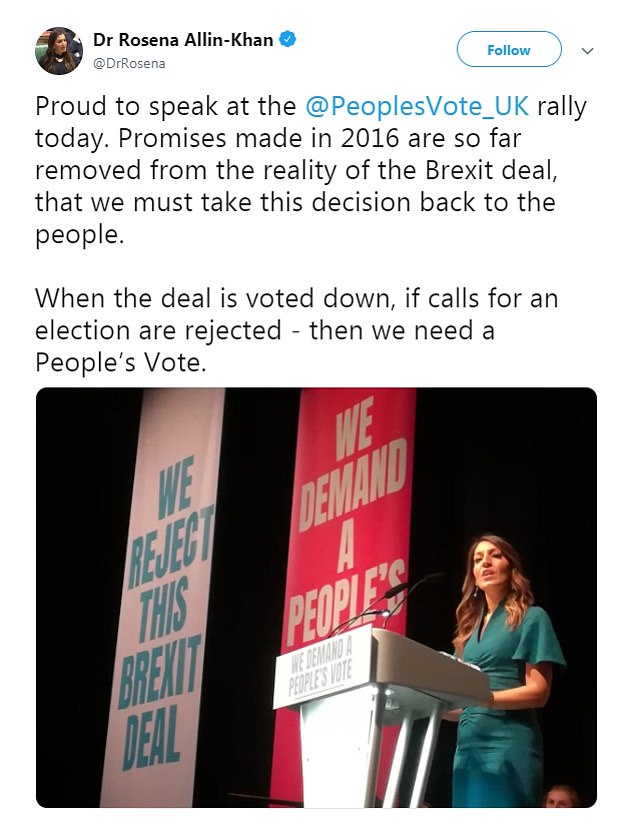 The Labour MP for Tooting also tweeted a picture of herself at the rally, which was attended by 4,000 people

Speaking at the Excel Centre in east London today, Dr Allin-Khan said: ‘I launched a local Brexit Poll, asking people to give me their views on the Brexit deal and today, I published the results – 90 per cent of local people want a People’s Vote.

‘Parliament has a decision to make in the next few days which will alter the course of history for the UK, for us and for our children.

‘The current Government is run on confidence and supply, but let’s be straight – confidence is in very short supply.

‘Let’s end the economic uncertainty, let’s end the fear mongering – and let’s have a campaign on the facts.

‘If calls for a General Election are rejected – I’ll be backing a People’s Vote.’

It was the first time she had spoken in support of a People’s Vote campaign, which is waging a campaign to stop Brexit.

A string of politicians from across the political divide, including Lib Dem leader Vince Cable, addressed the crowd this afternoon.

MailOnline has contacted the Labour Party to ask if her comments were approved by the leadership.

Mr Corbyn last week admitted that he might delay Brexit if he gets into power.

The Labour leader said he is determined to seize upon the Brexit chaos tearing the Government apart to oust Theresa May and get into Number Ten.

He told Sky News that if he gets into power he might delay Article 50 – the legal mechanism which gives the UK two hours to get out of the EU.

But he downplayed the prospects of another referendum.

He said: ‘I think people feel that if you simply go to everyone who voted in the referendum and say sorry you got it wrong, you have got to take the vote again, that’s not reasonable and that is not sensible.’

It comes as Parliament faces one of the most momentous weeks in modern history as MPs prepare to vote on the Brexit deal.

But Mrs May is facing a massive and humiliating defeat after over 100 Tory MPs vowed to oppose her deal.