The gyrfalcon, capable of a stoop at 250km/h, clasps its target in its talons in mid-flight. The target happens to be a robotic crow passably resembling a potential meal. This isn’t about the raptor defending its territory but part of a rehabilitation program operating in Western Australia – that is illegal in NSW. 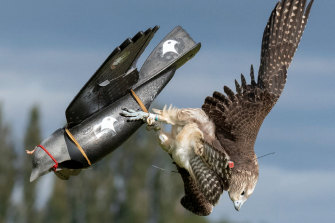 ‘Rocrow’ robotic bird used in the rehabilitation of gyrfalcon.Credit:Neil Davies

The ancient sport of falconry (think Henry VIII and Kazakh eagle hunters of Western Mongolia) has moved into the digital age with GPS and drones used to rehabilitate birds of prey.

The Raptor Fliers Association of WA uses free-flight falconry techniques to rehabilitate injured or orphaned birds and is licensed by the WA State government Department of Biodiversity, Conservation and Attraction. Birds requiring rehabilitation come from wildlife carers, veterinary hospitals or are picked up by the public.

A tail-mounted GPS tracker is attached to the falcon’s tail to monitor speed, distances and rates of climb during flights on a mobile phone app to ensure readiness for release to the wild. The association is calling for the rehab program to be sanctioned nationally but has so far been rejected by NSW. 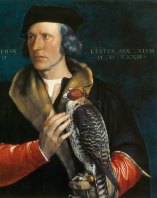 A portrait of grand falconer to Henry VIII.Credit:

Michael Calvin, the founder of the program, and Australian national delegate to the International Association of Falconry, said despite lobbying NSW National Parks and Wildlife Service since 2016, the proposal was rejected in November 2021. He has called on NSW to reconsider its position.

“What chance does an orphaned singleton Peregrine, that may never have taken a single wing beat [full cycle of moving wing in flight] in the wild, have of surviving if cast to the four winds just because it appears to be able to fly properly, even within the largest of aviaries? Almost none, is the stark and unfortunate reality,” Mr Calvin said.

“Falconry techniques, by definition, provide any raptor with a set of skills that are the ultimate measure of whether it has the wherewithal to survive in the wild environment.

“So, why do some regions of Australia actively outlaw these techniques as a rehabilitation tool whilst others allow them? Other rehab groups, who can’t demonstrate how fit a bird is for release, are resisting this because they got so much in donations and grants for just releasing a bird out of a box. Why are the opinions of the world’s foremost experts in this field being overlooked?”

Peregrine Falcon: Powerful, swoops on prey at up to 300km/h and numbers about 5000 Australia-wide.

Brown Goshawk: Medium-sized with rounded wings, they are found in wooded habitats.

Wedge-tailed Eagle: Australia’s largest bird of prey, it has a wingspan of 2.3 metres. They mostly eat rabbits but are sometimes shot in the mistaken belief they will take live lambs.

The rehab program is endorsed by Dr Margit Muller, who is executive director of the Abu Dhabi Falcon Hospital, the largest falcon hospital in the world.

She said: “I fully endorse and support their involvement in free-exercise techniques in raptor rehab in NSW, under appropriate accreditation and licensing of course.”

Regarded as a world leader on the subject, professor emeritus of avian medicine and surgery at Minnesota University Patrick Redig has led recovery programs for peregrine and condor numbers in the US, and supports the use of the program in NSW.

“It is well past time that free-flying methods for reconditioning raptors that are used extensively in other parts of the world be statutorily incorporated into the rehabilitation guidelines under consideration for NSW and elsewhere in Australia,” he wrote in a letter of endorsement.

“They have proven effective and might I say essential in the proper preparation of rehabilitated birds for release to the wild.” 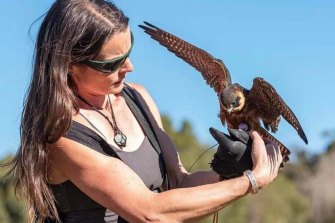 A glimmer of hope of the process expanding to other states came with a spokesperson for the National Parks and Wildlife Service telling The Sun-Herald it was “open to exploring with the wildlife rehabilitation sector and researchers new technologies that maximises opportunities for injured, sick and orphaned birds of prey to be successfully released back to the wild”.

“The NSW Department of Planning and Environment is still considering the technique, as expert opinion is divided. A considered management response is required and the welfare of the animal will be at the core of our decisions.”

Program member Gina Pike, who is based in Boddington, south of Perth, said generations of Australian falconers before her had to keep what they did as quiet as possible fearing prosecution.

“We are now seeing government departments move with the times and include falconry techniques in minimum standards for bird of prey rehabilitation,” she said.

“Thus so, we are seeing falconry brought out of the shadows and being discussed openly.”

A guide to the environment, what’s happening to it, what’s being done about it and what it means for the future. Sign up to our fortnightly Clear Air newsletter here.