Road traffic is again nearly as heavy as it was before lockdown with new data showing that vehicle numbers reached 88 per cent of pre-Covid levels on Monday.

The amount of motorists on Britain’s roads is up four percentage points week-on-week, according to the Department for Transport (DfT) data.

The figures were even higher over the weekend, at 94 per cent of an equivalent day in early February on Saturday and 98 per cent on Sunday. 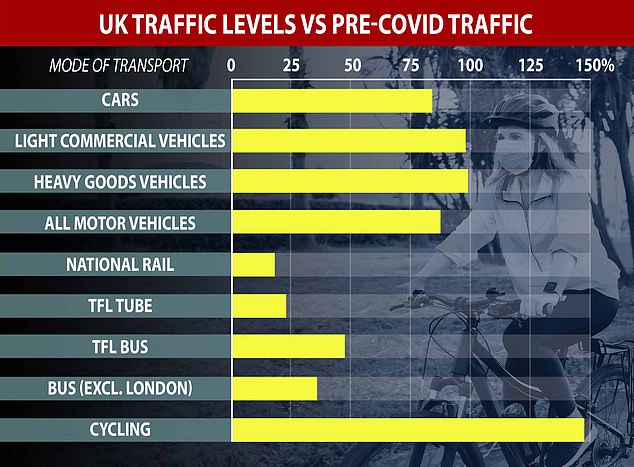 A graph showing the latest UK traffic levels vs pre-Covid traffic, with cycling at 146 per cent of an equivalent day in early February and cars at 85 per cent

A breakdown of the data shows on Monday the number of cars on the road was 85 per cent of what it was before the coronavirus outbreak, with vans and lorries at 97 per cent and 99 per cent respectively.

Latest confirmed data for trains show demand on July 13 was only 22 per cent of what it was pre-lockdown.

On Monday, bus use outside London was at 33 per cent, London Underground use at 23 per cent and cycling in England at 146 per cent.

Road traffic fell to 23 per cent of pre-pandemic levels in mid-April, as people were urged to stay at home to tackle the virus.

Steve Gooding, director of motoring research charity the RAC Foundation, said: ‘The national figures suggest that we are fast heading for pre-lockdown traffic levels in the round, but not necessarily at the same times of day.

‘With many office staff still working from home, schools only re-opening to a limited extent and delivery vans stopping us driving to the high street, we’ve escaped the full misery of the morning rush hour.’ 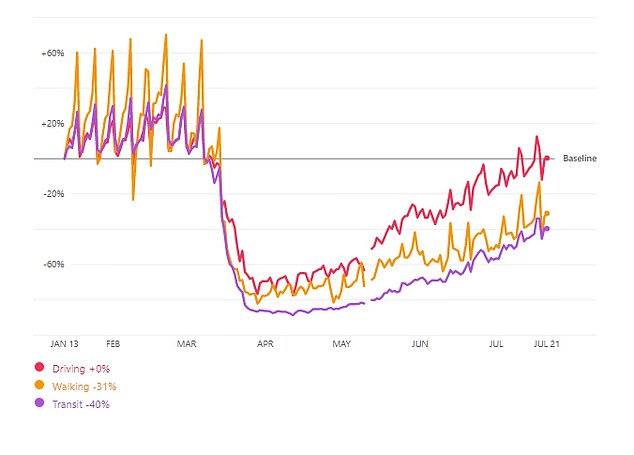 Traffic data for London from January 13 up until July 21, showing transit levels at 40 per cent below the baseline average. The capital city is lagging behind in phone mobility data 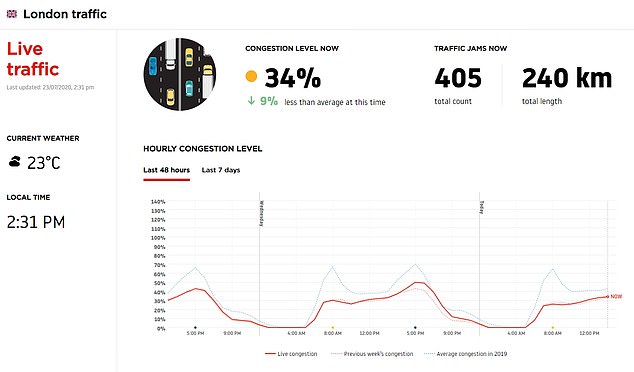 The latest data from TomTom shows congestion levels in London, which sits bottom of the ‘UK recovery index’, at nine per cent less than the average this afternoon 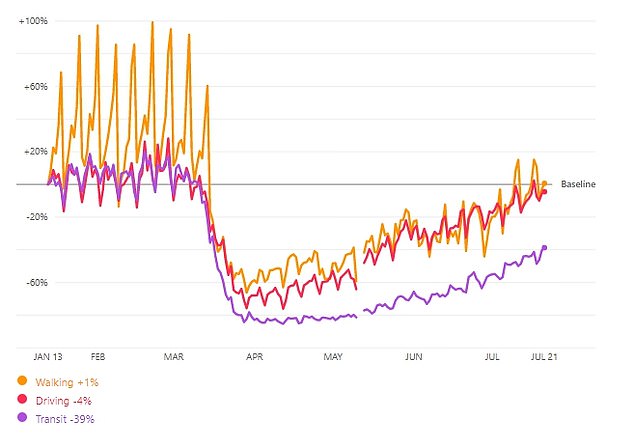 Apple mobility trends for Manchester up to July 21, showing walking at one per cent above the average baseline, driving down by four per cent and transit down by 39 per cent 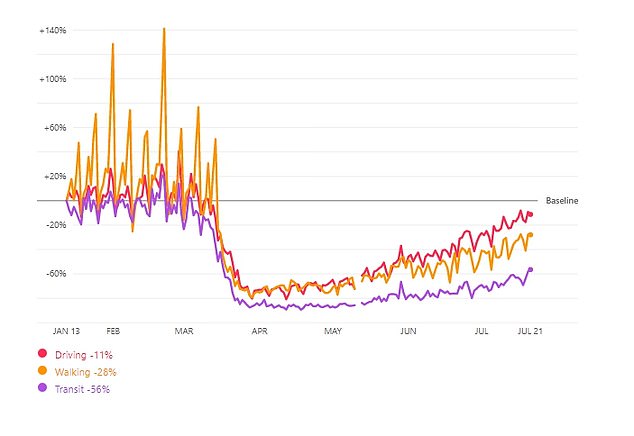 Apple mobility trends for Cardiff, showing a steady increase overall across recent months, but driving at 11 per cent below the baseline average and transit down by 56 per cent 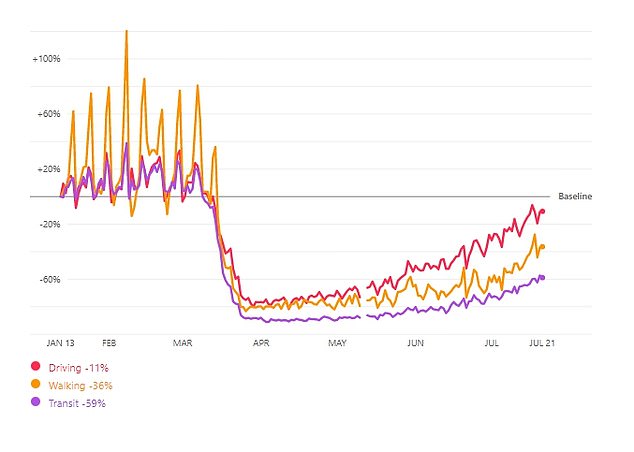 Apple mobility data for Edinburgh, Scotland, showing driving at 11 per cent below the baseline average, walking down by 36 per cent and transit down by 59 per cent

Mr Gooding predicted that many people embarking on staycations and long-distance trips to visit friends and family could decided ‘the best option for travel is the car’.

This would create ‘far more pressure’ on roads during traditionally quieter periods, he warned. Drivers have also been hit by a rise in fuel prices as the lockdown eased.

Government figures show average prices at UK forecourts are £1.12 per litre of petrol and £1.17 per litre of diesel.

This is the most expensive fuel has been since March 30, reflecting rising oil prices in recent weeks.

Slowest to recover (Centre for Cities recovery score in brackets)

Fastest to recover (Centre for Cities recovery score in brackets)

Fuel dropped to as low as £1.05 per litre of petrol and £1.12 per litre of diesel in May, as oil prices collapsed due to lower demand.

It follows the discovery that London is lagging behind in phone mobility data and sits bottom of the UK ‘recovery index’ as workers who usually commute are staying at home – but journeys have bounced back in commuter towns.

Despite Boris Johnson’s plea for workers to return to the office many of the nation’s biggest companies, including RBS, Google and Facebook will allow their employees to work from home for the foreseeable future.

London, which is one of the leaders in international financial services and commerce, has five business districts and is home to Europe’s biggest stock exchange, generating nearly a quarter of Britain’s GDP each year in normal times.

But there is a real danger of the UK economy failing to recover quickly or to anything like its pre-lockdown state unless employers and employees quash a growing appetite for continued home working in London.

A think-tank called the Centre for Cities has produced a nationwide league table of UK town centres based on their current footfall compared to pre-lockdown levels, which shows London at the bottom closely followed by Edinburgh.

In contrast, footfall in traditional commuter towns such as Basildon in Essex, Wigan and Chatham have bounced back as lockdown is eased and residents who would normally commute make journeys around their home towns.

Centre for Cities Director of Policy and Research Paul Swinney said: ‘London’s size and the ability of many of its office-based workers to continue to work from home are likely to be the main reasons why it is having one of the slowest recoveries from lockdown.

‘Having smaller shares of private car owners is likely to be an additional factor given that many people are still reluctant to use public transport to travel into the centre.’