Rishi Sunak will set out Government spending plans for the next year on November 25, he revealed today as coronavirus wreaks havoc with the UK economy.

The Chancellor had already confirmed that it was scrapping a planned multi-year spending review in the wake of the tumult caused by the pandemic.

Instead he will set out a 12-month plan with its sights firmly set on coping with the dire financial impact of the global shutdown.

PM Boris Johnson wanted to use the three-year spending review to set out his masterplan for how he intends to deliver on his promise to ‘level up’ the nation.

But the cancellation confirmed the Government has now conceded it needs to focus all of its energy on firefighting Covid-19.

Mr Sunak today tweeted: ‘On November 25 I will deliver the 2020 Spending Review alongside the Office for Budget Responsibility (OBR) forecast, setting out spending plans for the next year so we can continue to prioritise our response to Covid-19 and protect jobs.’ 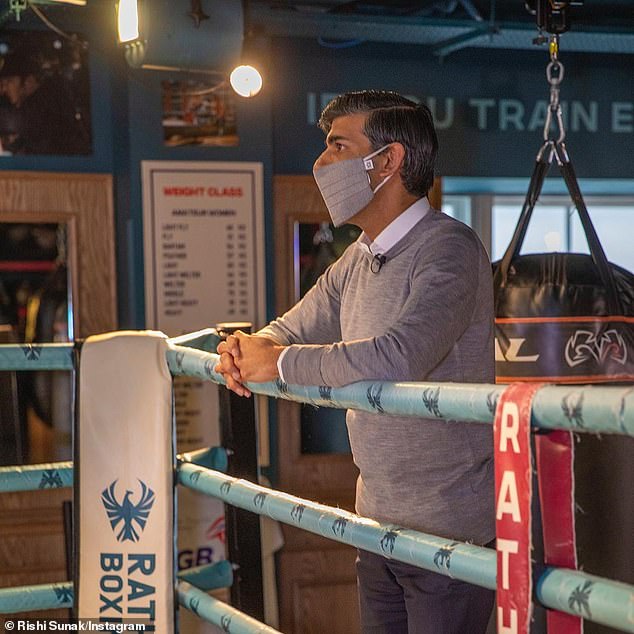 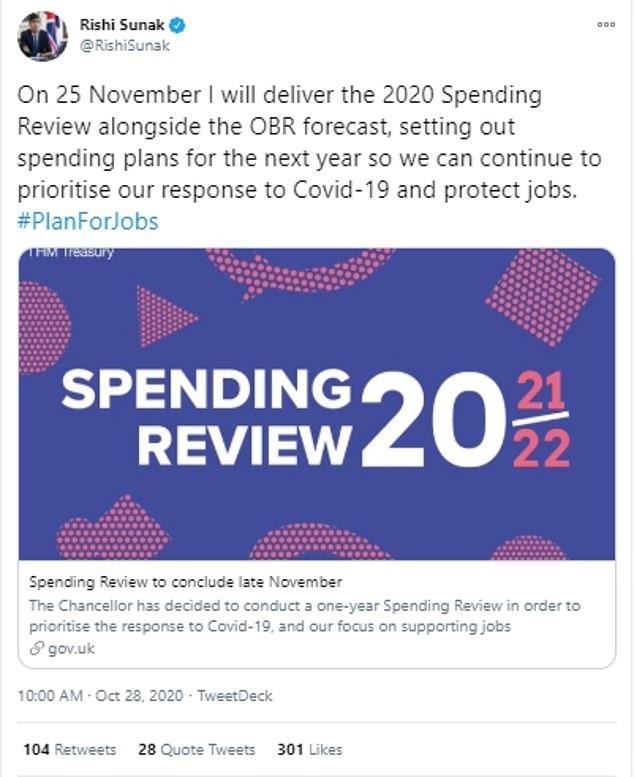 Following pressure from a campaign by England footballer Marcus Rashford for the Government to extend free school meal provisions during the holidays, Number 10 hinted this week that Mr Sunak could announce extra support as part of the fiscal package.

The Prime Minister’s official spokesman pointed reporters to comments from Health Secretary Matt Hancock that ‘the spending review sets out any future funding on behalf of the Government’.

Mr Sunak will use his review to set departmental resources and capital budgets for 2021-22, and the devolved administrations’ block grants for the same period.

Funding for the NHS and schools will remain multi-year, along with priority infrastructure projects.

The shift to a single-year review will have a knock-on impact on the wider programme examining the UK’s defence spending and foreign policy priorities.

The integrated review of security, defence, development and foreign policy is intended to define the Government’s vision for the UK’s role in the world over the next decade.

The Prime Minister’s official spokesman said last week: ‘We are considering the implications of the one-year spending review on the integrated review and we will provide an update on that in due course.’

The lack of a long-term funding settlement will make it difficult for the department to plan for the future at a time when its budget is already under massive strain.

There have been claims that Mr Sunak is in a battle with Mr Johnson to pare back a Tory manifesto pledge to spend an extra £100 billion on infrastructure amid fears the UK can no longer afford to honour the commitment.

The commitment was made in the 2019 Tory manifesto with Mr Johnson describing the ‘New Deal’ spending plans as ‘positively Rooseveltian’ in a speech in July.

But Mr Sunak is said to be pushing for the plans to be scaled back over the next three years because of fears the public finances will no longer be able to cope with such an outlay given the amount of cash being spend on the Covid-19 response.