Coalition of human rights groups calls on Prime Minister May to withdraw the invitation to Saudi Arabia’s crown prince. 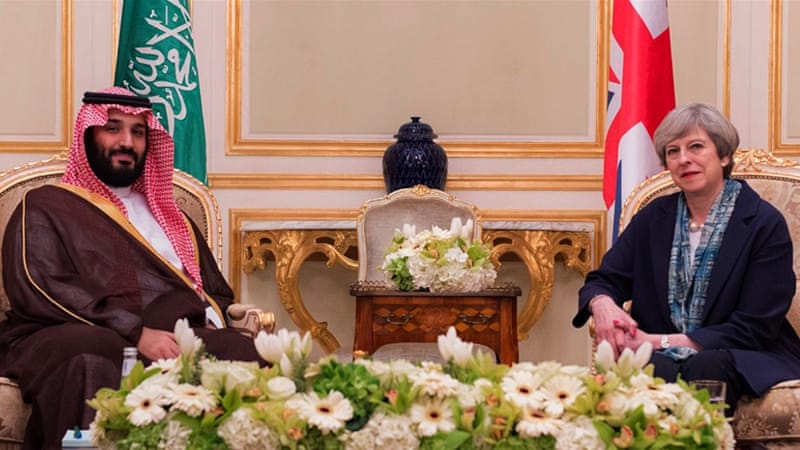 UK Prime Minister Theresa May should withdraw an invitation extended to Saudi Arabia’s Crown Prince Mohammed bin Salman to visit the UK, a coalition of human rights group has said.

The coalition, including the Campaign Against Arms Trade (CAAT) and Arab Organisation for Human Rights in the UK (AOHR UK), sent a letter on Monday to the British leader saying the visit was not in the UK’s interest, nor in the interest of ‘the peoples suffering from the Crown Prince’s adventurism.

‘The Saudi regime … has one of the worst human rights records in the world. Torture, arbitrary detention, and other appalling abuses are widely documented,’ the letter said.

‘It shames us as a nation to support and associate with a brutal dictator who uses hunger as a weapon, and has allowed the largest cholera epidemic in history to develop in Yemen,’ it added.

Saudi Arabia has been at war in Yemen since March 2015, when a coalition led by the oil-rich kingdom launched a campaign of aerial bombardment, aimed at countering Iranian-backed Houthi rebels and reinstating the government of President Abd-Rabbu Mansour Hadi.

The UK government has licensed more than £4.6 billion ($6.3bn) worth of arms sales to Saudi Arabia since the bombing began, according to CAAT.

To date, an estimated 10,000 people have died in the war. Yemen’s cholera outbreak, a direct consequence of the conflict, has claimed about 2,000 lives and affected more than one million people since April 2017.

‘UK personnel, from the armed forces and BAE Systems, are present in the Saudi operations centre, aiding this catastrophe.’

A spokesperson for May said the prime minister ‘looked forward to welcoming the Crown Prince to the UK in the New Year’, on December 20, 2017.

Reprieve, a UK-based human rights organisation, said the following day that the invite had been given ‘amid a wave of repression in Saudi Arabia’.

‘Despite the Crown Prince’s rhetoric of reform, the reality is that on his watch, executions have sped up, dissent has been criminalised, and juvenile protesters are facing the swordsman’s blade,’ Maya Foa, the organisation’s director, said.

According to Reprieve, at least 142 people were executed in Saudi Arabia last year.

Monday’s letter – also signed by the Bahrain Institute for Human Rights, Sheba for Democracy and Human Rights, Human Rights for Yemen, Iraqi Democrats, and Stop the War Coalition – accuses Saudi officials of having ‘supported repression in other states’ such as in Bahrain in 2011, during a military crackdown against anti-government protesters.

It also references the current blockade imposed on neighbouring Qatar by Saudi Arabia – alongside Bahrain, the United Arab Emirates (UAE) and Egypt – and Mohammed bin Salman’s recent attempt to pressure Lebanon’s Prime Minister Saad Hariri into resigning from his position, as evidence of ‘failed attempts to impose regime change on sovereign nations’.

The move marked a departure from Saudi Arabia’s line of succession, breaking with decades of custom maintained by the kingdom’s royal family.