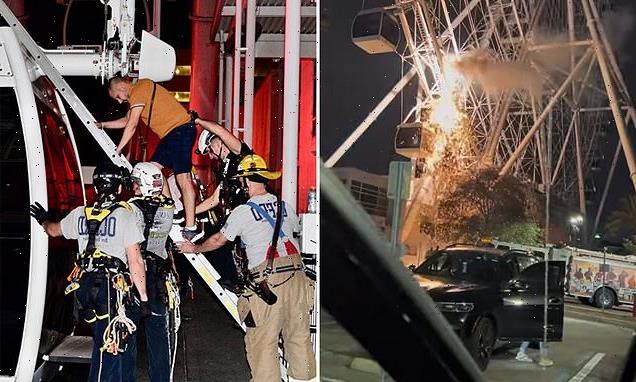 Riders are left trapped on 400ft Ferris wheel at Orlando’s ICON Park after it lost power when small fire broke out near its base: Theme park was scene of tragedy where 14-year-old plunged to his death from Free Fall attraction

More than 60 people were trapped hundreds of feet in the air for hours when the Ferris wheel at ICON Park in Orlando, Florida over the weekend.

Orange County Fire and Rescue said they received a call about a power failure at the park at around 6.20pm pm Saturday, when 62 people were aboard the 400-foot tall ride.

Video taken on the scene shows sparks flying from one of its compartments before the ride reached a standstill.

Rescue crews then had to work to manually evacuate all of the riders in a daunting task that took three hours to complete, as riders remained at the edge of their seats, but fortunately no injuries were reported. 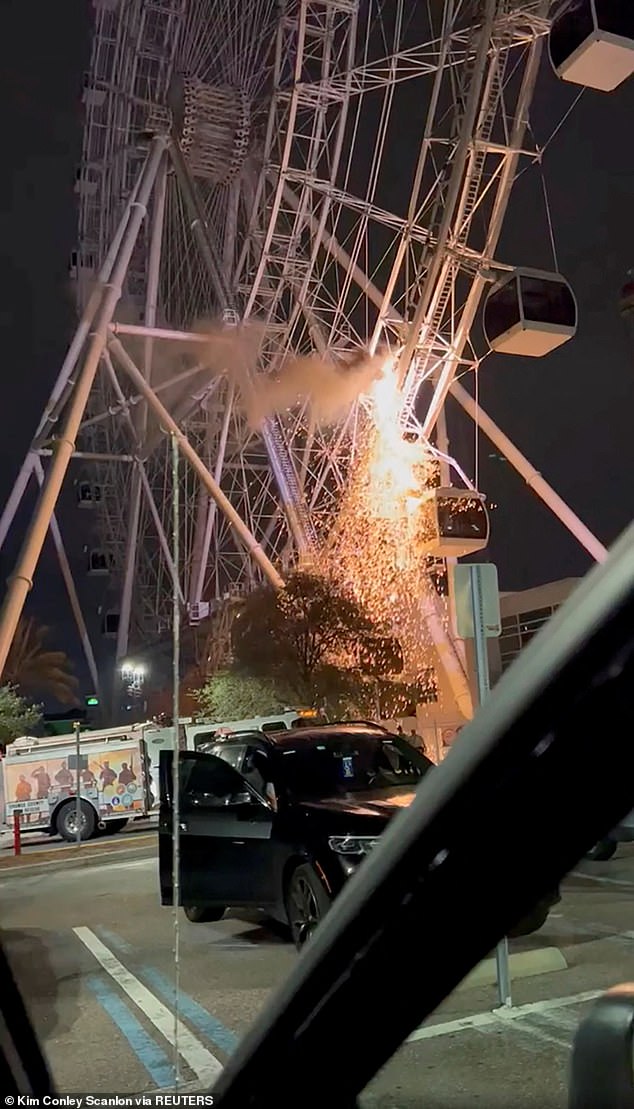 Sparks flew from one of the compartments of the Ferris wheel at Orlando’s ICON park on Saturday as it lost power, trapping riders for hours

The ride is now being investigated, WESH reports, one year after a 14-year-old boy plunged more than 400 feet to his death from another ride at the amusement park.

They were pictured climbing up ladders and the scaffolding of the ride, which they had to manually turn to bring each of the 20 compartments the riders were in to the ground in a process that took three hours to complete.

In a tweet Saturday night, the Orange County Fire Rescue said: ‘All rescue climbers on duty responded to the scene, with additional off-duty rescue climbers also responding to assist.’

They were ready for the challenge, a spokesperson told FOX 35, saying its climb team has prepared for exactly this type of situation.

‘This is one of the attractions they practice on,’ the spokesperson said. ‘We’ve trained hours and hours on this type of rescue. We were ready for this.’

But while the climb team worked to lower each compartment, those on board were stuck hundreds of feet in the air as the fire raged below them. 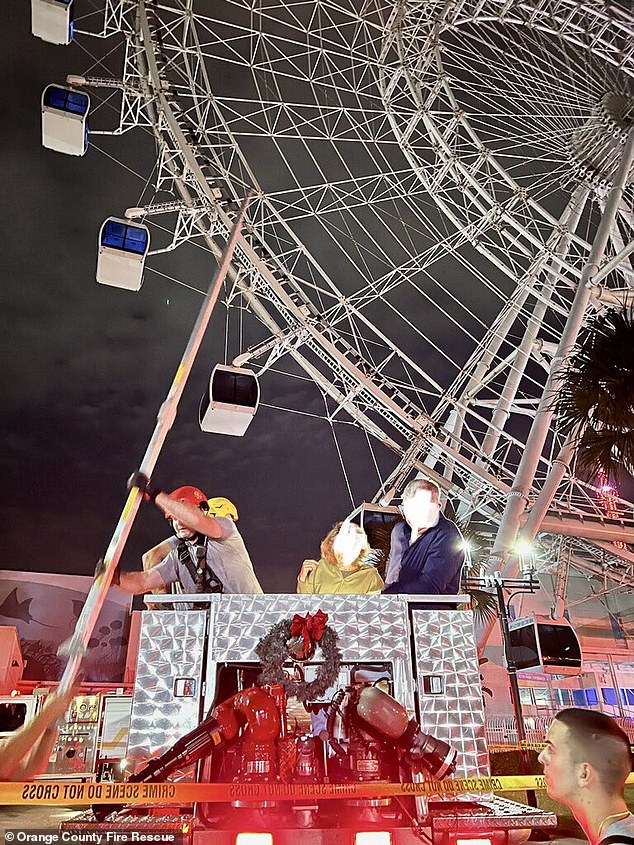 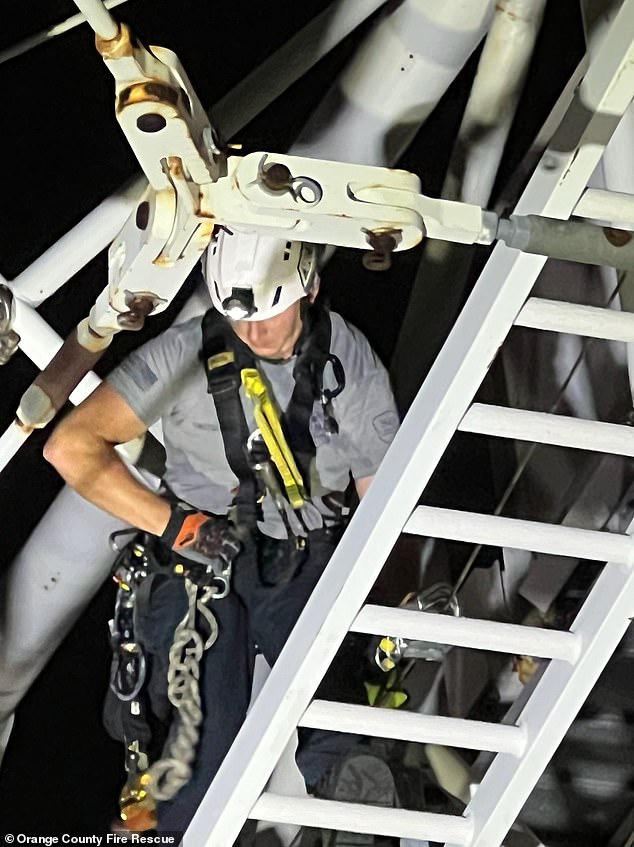 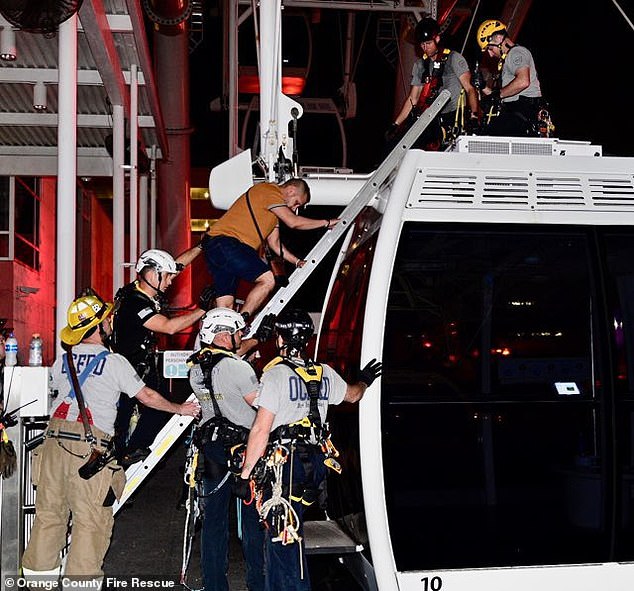 The crew had previously trained for an emergency situation like this, practicing their climbing on the popular ride

Rider Robin Baker said she was about ‘a third of the way’ to the top when the lights went out and the ride shut down.

‘We look down and there were flames and sparks and smoke coming,’ she told WESH. ‘I guess the generator blew or something.’

‘It was quite nerve-wracking for a little bit,’ witness Kathy Baker added.

They said when they finally reached the bottom and firefighters opened the hatch, they asked the riders whether they were OK.

When they confirmed that they were unharmed, Robin and Kathy said, the firefighter simply apologized for the delay and told them to ‘Watch your step. 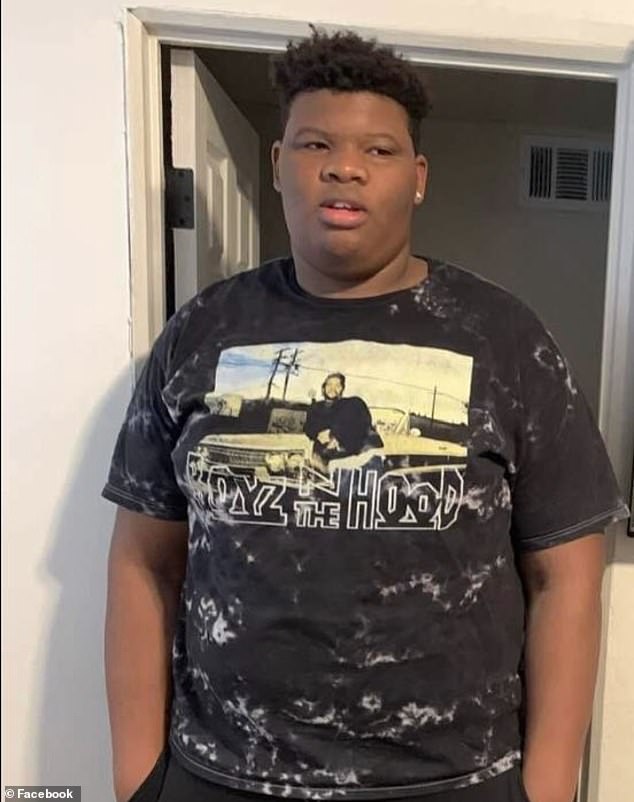 Tyre Sampson was an aspiring football player and honor roll student. His life was cut short on March 24 when he plummeted to his death from ICON Free Fall ride in Orlando 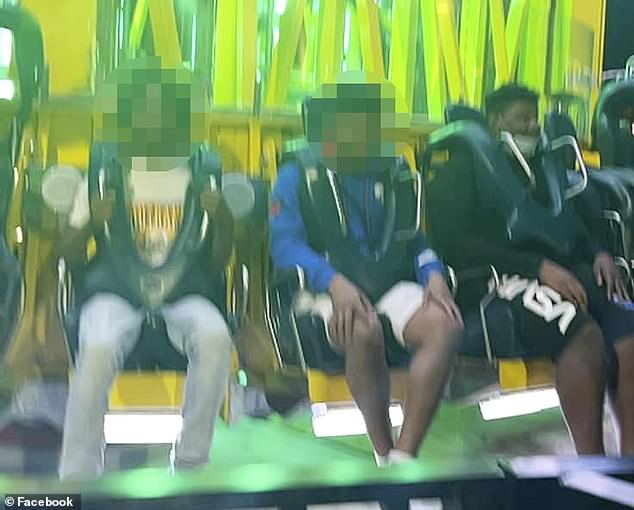 The incident comes just months after 14-year-old Tyre Sampson plunged more than 400 feet to his death while riding the infamous FreeFall ride at the Orlando theme park.

He was on a football program trip from St. Louis in March, when he slipped out of his seat on the ride. An ensuing investigation found that his safety harness was not properly secured and the sensors had to be overridden to allow Sampson to ride.

He was told by other rides in the park that he was too large to ride safely but was later granted approval from the FreeFall operators – event though the maximum weight for the ride was 287 pounds.

A photograph of Tyre taken before the ride went into the air shows him sitting with his harness unbuckled and not pulled down and fastened into his seat.

Tyre and the rest of the group had been told moments earlier that there were no seatbelts on the ride. The only thing stopping them from falling out of their seats were plastic, pull-down harnesses which are supposed to buckle in place, in between riders’ legs.

In a viral video that circulated after Tyre’s death, a ride operator could be heard asking another if they had ‘checked’ the seatbelt.

‘Yeah, the light was one,’ one of the ride operators said in the video.

‘We both…we checked it. The light was on,’ a third worker said. 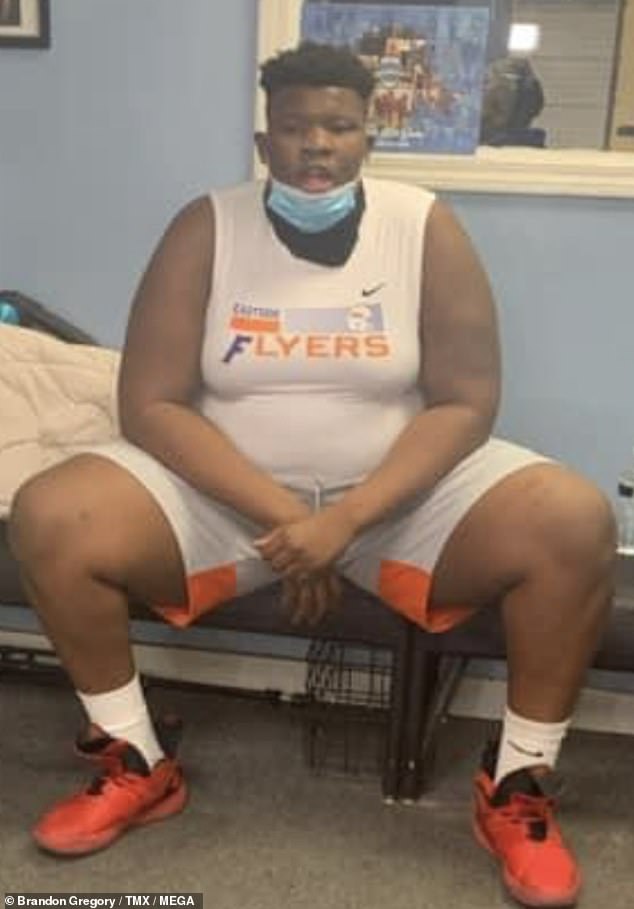 Buy Tyre had reportedly been worried about the harness prior to the ride beginning, his father previously told WOFL-TV. The teenager told his friends sitting next to him to tell his parents that he loved them.

‘When the ride took off, that’s when he was feeling uncomfortable. He was like “this thing is moving,” you know what I’m saying. And he was like “what’s going on?”‘ Yarnell said.

The grieving father said that Tyre began to panic and shared a chilling premonition with his two best friends, seated next to him on the ride.

‘That’s when he started freaking out. And he was explaining to his friends, next to him: “I don’t know man, if I don’t make it down, safely, can you please tell my momma and daddy that I love them,”‘ said Sampson. ‘For him to say something like that, he must have felt something.’

Sampson’s family has been advocating for the ride to be taken down for months and launched a lawsuit in June against the ride’s owner, manufacturer and landlord, saying they were negligent and failed to provide a safe amusement ride.

Finally, in October, the ride’s operator, Orlando Slingshot, announced that it would tear down the ride.

‘We are devastated by Tyre’s death,’ Orlando Slingshot wrote in a statement. ‘We have listened to the wishes of Tyre’s family and the community, and have made the decision to take down the Freefall.’

The ride operator said there is no set timeline for when the demolition will occur. Additionally, Orlando Slingshot announced they are developing a scholarship in honor of Tyre.

ICON Park responded to the decision to take down the ride and said they ‘respect’ Orlando Slingshots initiative to tear it down.