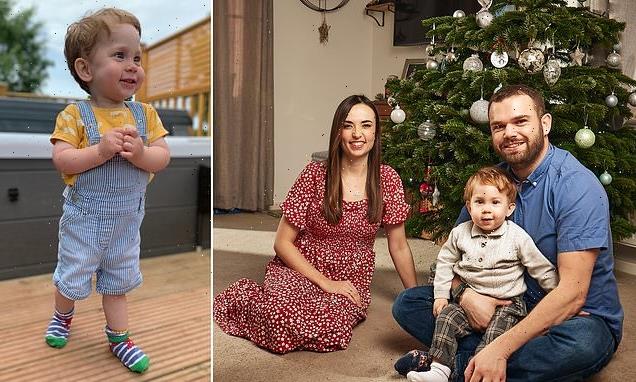 On Christmas morning, two-year-old Albie Shoult will be joyfully tearing through wrapping paper, opening the stack of presents under the tree with his mum and dad. And for his parents, Hannah and Jedd, it will be a precious moment, as the past two Christmas mornings have been almost as far from normal, happy family occasions as it was possible to be.

Within hours of Albie’s birth on Christmas Eve 2020, he was diagnosed with three life-threatening conditions.

His oesophagus – the food pipe – had not formed properly and did not connect to his stomach, meaning he could not swallow. His trachea – the windpipe – was weak and floppy, rather than the rigid tube it should be. He also had a serious heart condition.

Since then, Albie has spent much of his short life in hospital, often in a perilous condition. 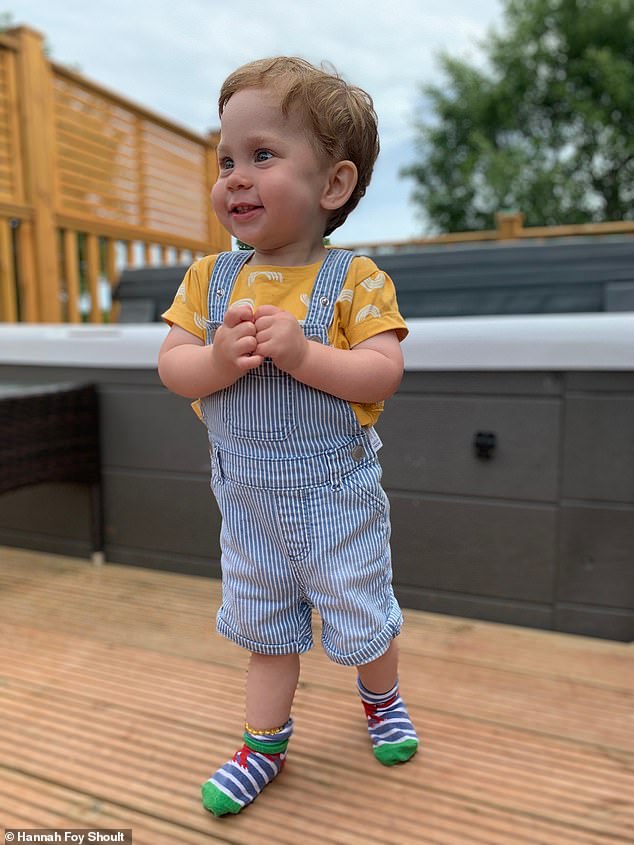 Albie Shoult, two, was born on Christmas Eve 2020 with three life-threatening conditions – one of which prevented him from being able to eat 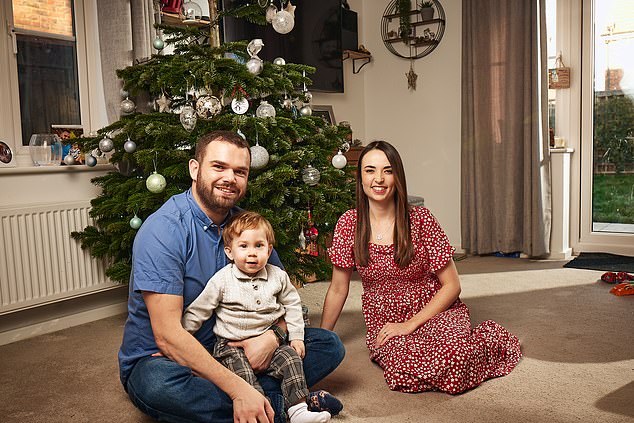 Following a revolutionary operation to extend his oesophagus, Albie is now able to eat and will enjoy a Christmas dinner with his parents Jedd, left, and Hannah, right

While his first Christmas was spent fighting for his life, his second was spent recovering from major surgery, unable to eat or enjoy the festivities.

So after a number of procedures – including being one of the first babies in the UK to benefit from an innovative new technique to stretch the food pipe, finally allowing him to swallow – this Christmas will be one to savour.

Hannah, 30, a family support worker from Aylesbury in Buckinghamshire, says: ‘Two years ago I thought we may never bring our baby home, and now we are looking forward to a family Christmas with Albie.

‘It feels incredible that he will be here, having turkey and all the trimmings with us at the dinner table, when he was born unable to swallow and we worried he might never be able to eat normally.’

When Hannah went into labour on December 24 it was about a month early, but she and Jedd, 34, an aerospace engineer, were delighted at the thought of a Christmas baby. Albie arrived that evening at their local hospital, Stoke Mandeville, after an emergency caesarean due to concern’s about the baby’s high heart rate.

But while Hannah had had a normal pregnancy, doctors immediately began to worry about the newborn.

‘There was lots of whispering in the room among the midwives and doctors,’ she says. ‘Albie was only slightly early, but they said they were talking him down to intensive care. Then the doctor came round to us and said Albie couldn’t swallow. I wasn’t really able to understand it or take it in, as it sounded so strange. It is not one of the things that you worry about as a new parent.’

Albie had a complex problem where his oesophagus and windpipe had not formed properly. These two defects meant that the upper part of his food pipe ended in a pouch, rather than running down to connect to his stomach, while the lower part was attached to his airway. 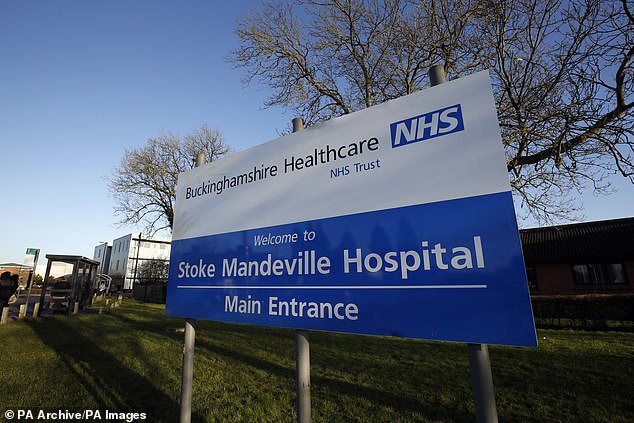 Albie was born at his local Stoke Mandeville Hospital near Aylesbury, Buckinghamshire

Because of this, he couldn’t swallow. Dangerously, this also allowed air to pass from the windpipe to his stomach and stomach acid to pass into his lungs.

The windpipe is a stiff tube that allows air to easily pass in and out, but Albie’s is much more floppy, making it likely to collapse and harder to get oxygen into his lungs. The rare condition, called oesophageal atresia and tracheo-oesophageal fistula, often shortened to TOF, affects about one in 3,500 births – around 200 children in the UK each year.

It is thought to happen when the windpipe and food pipe don’t separate properly as the baby develops in the womb. Babies affected by this can develop life-threatening problems such as choking and pneumonia, if not treated quickly.

On top of this, the day after he was born, Albie was diagnosed with a heart defect where the main artery in the body – the aorta, which carries oxygenated blood out of the heart and around the body – is too narrow.

He was placed on a ventilator and rushed to the neonatal intensive care unit of the Evelina London Children’s Hospital.

Hannah adds: ‘It was such a traumatic time. We had no idea anything was wrong with Albie and you imagine you will take your baby straight home after giving birth. It was the peak of the pandemic, and we could only be with Albie one at a time, so the three of us couldn’t even be together. Albie looked so tiny.’ 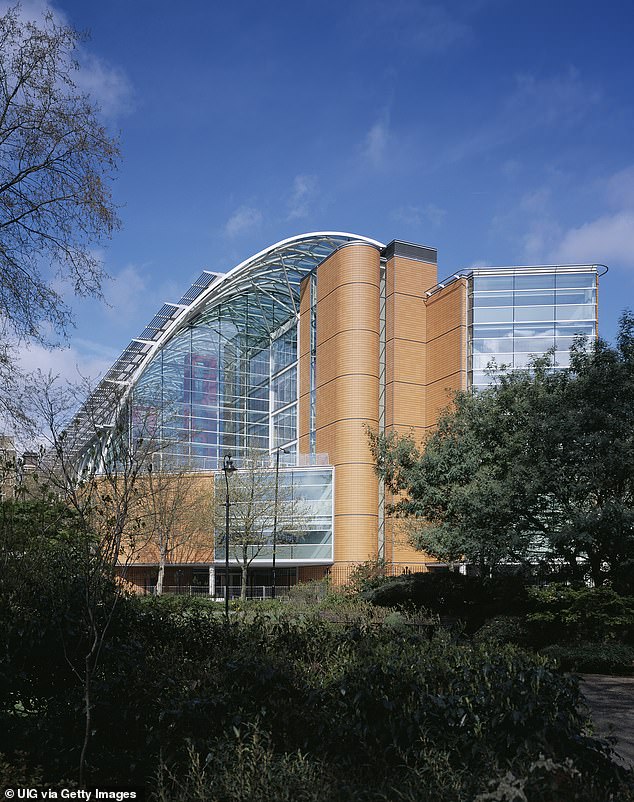 Kirsty Brennan, consultant paediatric and neonatal surgeon at Evelina London Children’s Hospital, says: ‘Albie has had a tumultuous journey because all these three conditions are life-threatening individually, so to have them together is huge.’

However, the surgeries were successful, and three weeks later Albie was discharged. But at home, Hannah noticed he was increasingly struggling to take down milk, coughing and spluttering.

‘One day while feeding, Albie suddenly went blue and stopped breathing. My husband had to revive him by breathing into his mouth. It was horrifying.’

Kept alive by Jedd’s first aid, Albie was rushed back to Evelina. They discovered that Albie’s oesophagus had narrowed, caused by scar tissue building up around the pipe where it had been repaired, and as he was working so hard to feed his trachea had collapsed, stopping him breathing.

The oesophagus needed widening so that Albie could swallow. This would involve an operation under a general anaesthetic, once a fortnight for up to six months, to allow a balloon to be put down his throat. This would then be expanded to stretch the narrow area.

But surgeons at the Evelina decided to use an innovative approach that had been used successfully in the Netherlands but not yet in the UK.

The procedure placed a thin tube – called a catheter – containing the deflated balloon up Albie’s nose and down his throat. This was left in place, with the tube running across his face and behind his ear. Three times a day, Hannah or Jedd would inflate the balloon using a syringe filled with air.

Ms Brennan says that the procedure not only avoided extra anaesthetics – important for Albie, whose heart condition put him at higher risk of complications – but also worked more effectively than the traditional method as the stretching of the oesophagus was carried out more frequently.

Hannah says: ‘It felt very bizarre to be stretching his oesophagus, but it saved Albie having all those anaesthetics and meant we could live a more normal family life as he didn’t have to stay in hospital every other week.’

After about five weeks, the thin tube was taken out. When doctors checked the progress they were delighted to find it had widened his food pipe enough to allow him to swallow. ‘It worked better than the usual approach because the stretching happened so much more frequently. We have already used it in another child since and, while it won’t be right for every family it is a great new option,’ Ms Brennan says.

Though this solved the narrowing of the throat, Albie started to suffer repeated colds in the autumn of 2021.

‘Each time he had a cold or virus he would get worse and be more unwell,’ says Hannah. ‘He was being admitted to hospital for longer, his oxygen levels were lower each time and he was ending up in intensive care.

‘He was struggling to cough to clear his throat, and was finding it hard to breathe. He was miserable and unhappy.’

Further investigations revealed that the floppiness of his airway meant that the weak tube was collapsing each time he breathed out. Catching a cold would add extra pressure on his already struggling lungs, leaving him dangerously unwell.

So last November, surgeons at Evelina operated to attach the back of his airway to his spine so that it wouldn’t collapse when he breathed out.

‘It meant another big operation – this was one took eight hours,’ says Hannah. ‘I was terrified, but afterwards he was like a different baby. He was so much happier.’

Ms Brennan says that, critically, this operation meant that Albie didn’t need to go on to long-term ventilation where a machine helps him breathe. This option may have been considered by other hospitals, but can mean a drastically different life for the whole family.

So last December Albie was back at home, recovering from this operation. Covid was still a worry, meaning Christmas was a muted, anxious affair.

But this year Albie has hardly been in hospital.

He has thrived and started eating, and is living a life little different to any other toddler. He loves counting and watching cartoons on television.

For Hannah and Jedd it has been a miraculous turnaround from his tough first year. While he has to chew more slowly and thoroughly, and drink plenty of water, he now enjoys many different types of food.

‘He loves pasta, sandwiches, chocolate and fruit,’ says Hannah. ‘We’ve been slowly weaning Albie. It’s trial and error to see what works as he suffers from reflux, and the muscles in his oesophagus don’t work quite as well.

‘The other day when I was eating breakfast, he stole a piece of toast off my plate. I was so amazed to see how well he ate it that I burst into tears. It was such a great moment.’

This means that on Christmas Day Albie will eat his lunch with the rest of his family – an event which had once seemed impossible.

The toddler remains under the long-term care of a team at the Evelina, who will monitor his heart condition and the problem with his trachea into adulthood.

But Ms Brennan says it is remarkable how far he has come and that his family can look forward to him hitting the normal childhood milestones – for many with such a complex combination of medical problems, this is not the case.

‘Albie is doing fabulously,’ she says. ‘Any of those three conditions were life-threatening and could have led to brain damage or severe cerebral palsy and a completely different life. I have seen beautiful photos and videos of him sitting in his highchair and enjoying food.’

For Hannah and Jedd, it will be a Christmas to treasure.

‘We are not sure what the future holds but I feel confident Albie will have a healthy, happy life,’ Hannah says.

‘The doctors and nurses at the Evelina have saved his life, and saved our lives. We are doing everything this Christmas, celebrating with friends and family, seeing the lights and visiting Santa in his grotto.

‘The fact he was born at Christmas, and at times we thought he might not be coming home, just makes it so much more magical.’