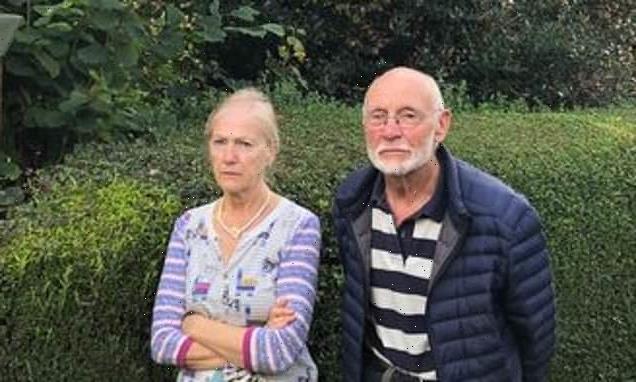 Retired RAF musician, 82, says his life is being made misery because next door garden is so overgrown it’s blocking out light and has knocked £20,000 off value of his house

A retired RAF musician who played for the Queen says his life has become a living nightmare because a neighbouring garden has grown wildly out of control.

Fred Sweenie says the semi-detached house next door is so overgrown it blocks the light to his garden and the situation is now affecting his health.

He also claims there have been issues with rats that he has seen coming into his garden.

The 82-year-old is now worried he won’t be able to sell his home after an estate agent told him the state of the garden would knock at least £20,000 of the value of his house. 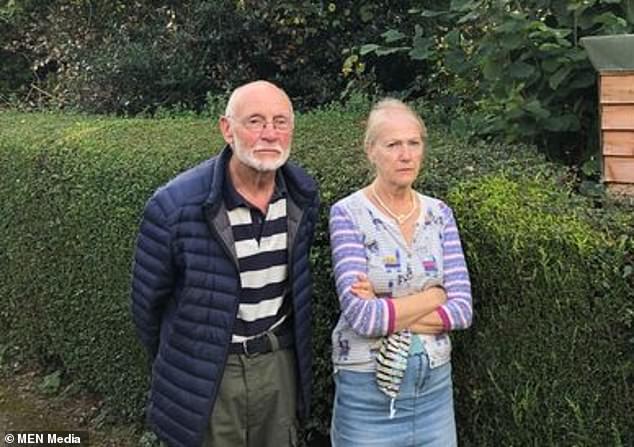 Retired RAF musician Fred Sweenie says his life has become a living nightmare because a neighbouring garden has grown wildly out of control. Pictured: Fred with wife Janet in their garden 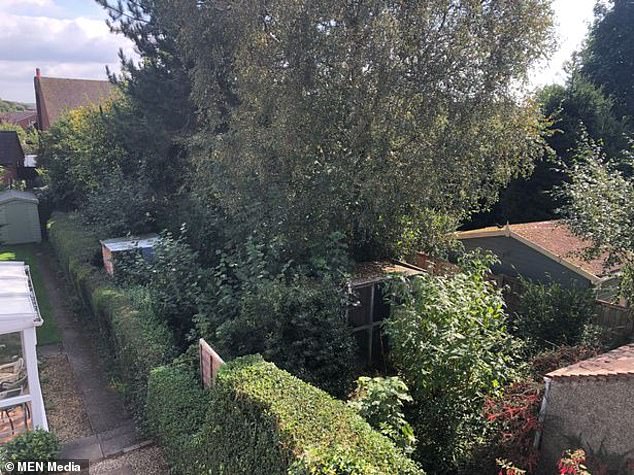 Mr Sweenie served 12 years in the RAF Central band, playing at major Royal events, including at Buckingham Palace garden parties attended by the Queen and at the Cenotaph. He has also toured with former Yes keyboardist Rick Wakeman.

He feels his country is ‘letting me down’ and wants something to be done, saying there have been issues he has had to put up with for 12 years.

The 82-year-old lives at his property with his 69-year-old wife Janet and their 36-year-old son Guy and says he have not seen anyone at the house for the last 15 years.

The family have been complaining to the Lichfield District Council about the garden for 12 years.

He said: ‘Every time we try to do something it gets blocked. We don’t know why. We first moved into the property in Rugeley Road in 1982. 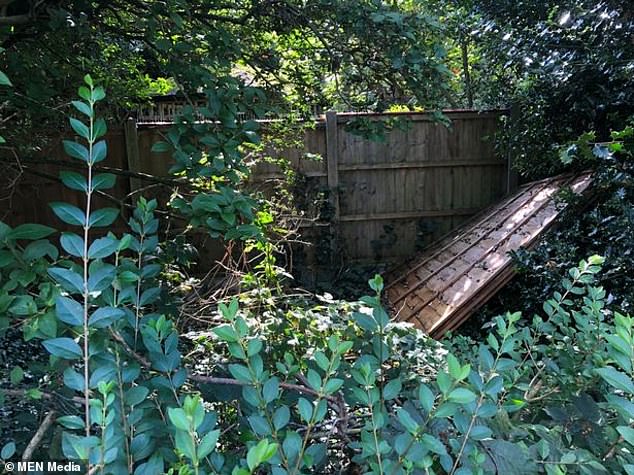 The 82-year-old is now worried he won’t be able to sell his home after an estate agent told him the state of the garden would knock at least £20,000 of the value of his house

‘At the time, next door was well kept and well maintained. This really started to go wrong around 20 years ago. There was a serious neglect of the garden. It looked like there was no money being spent on repairs at the house.

‘The last time we saw someone at the property was around 15 years ago. Our first complaint was around 12 years ago. It came about after we heard a humming noise coming from next door. We enquired and it turned out the wiring was archaic which led us to be worried about a possible fire hazard.

‘I explained to the person from the council that no-one had been living there and the house was unoccupied.’

Mr Sweenie said: ‘By 2017, the garden next door was having a serious impact on our health and wellbeing. Rats had started to appear in our garden and we could see the holes where they were coming in. We reported it to environmental health. No response there. 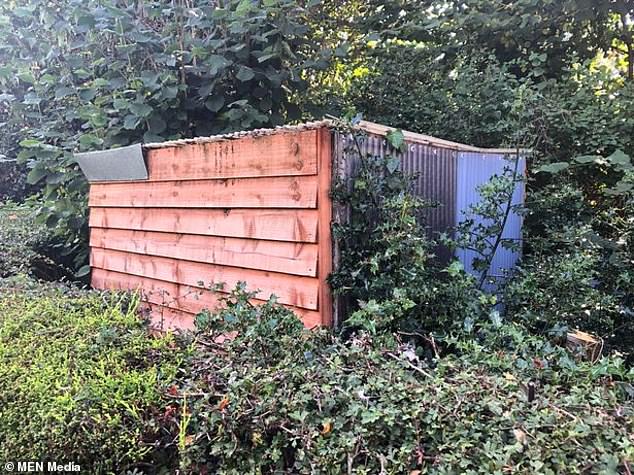 ‘So we went to Mr Fabricant who was fantastic. He wrote numerous times to the council requesting a full investigation into the property.

‘When they did undergo a full investigation, they said that the property was occupied and that, apart from one shed that was full of food waste that had to be knocked down, there was no need to do anything else. When they told me that, it felt like someone was stabbing me in the chest.

‘It made me very ill and we dropped the inquiries in 2017. I was getting nightmares. That was the worst time I think. The house combined with the rats and the fact that we get no light in our garden because of the towering trees really made me ill.’

Son Guy added: ‘I have no doubt that the whole process was making dad very ill. If they take this long, I have to ask the question, is he going to live to see the changes?

‘We might be waiting another two years before work starts on the garden next door. They told us that any materials next door could not be removed because they are “inert”. What does that even mean?

‘We want a full investigation into the property. There are issues at that house next door. You cannot look at it any other way than that. It just feels like we hit a brick wall every single time.

‘The garden is clearly overgrown and it is causing issues to us.

‘It is very distressing when you have elderly people. It just makes them ill. They are at home quite a lot and the fact that they cannot enjoy any sunshine is as bad as it gets.

‘We thought that this year I would be able to see them sitting in the sun. When you look at it, you think, how on earth can it possibly be acceptable?’

Mr Sweenie added: ‘We have no light here. I think it is disgusting. We cannot sell the property either. We had an estate agent who came and told us that it is knocking at least £20k off the value of the house.

‘The environmental issues must be dealt with but I think the worst thing is the overgrown trees. If you clear the garden you can at least sit in the sun.’

Janet, a music teacher, said: ‘We are at our wit’s end. I am totally on the limit here. I just think it’s so wrong. Our bedroom overlooks the back garden and it is the first thing I see in the morning when I open my curtains. It makes you feel depressed.

‘It could be a beautiful sunny afternoon and we would want to sit in the sunlight but we can’t.

‘Our quality of life has deteriorated given the state of the garden. It just feels we are running out of time.’

Mr Sweenie added: ‘If you cannot treat respectful citizens such as myself with compassion, it says something sad about society. I’ve played for Her Majesty the Queen and at Westminster Abbey and at the opening of Birmingham Symphony Hall.

‘We have never been impolite or unprofessional but we are not happy. We want them to acknowledge that it is having a negative impact on our lives.

‘To do all of the things that I’ve done I am now being treated as a second-class citizen. People should be treated with more respect.’

Lichfield MP Mr Fabricant said: ‘Back in May, we asked Mr Sweenie to send us further information and we have still yet to hear from him. This is, however, a district council matter though we are always happy to act as intermediaries.’

Head of corporate services at Lichfield District Council Tracey Tudor said: ‘When investigating this type of neighbourhood complaint we need to establish that the condition of land or buildings is harmful to the area, which is not straightforward.

‘Having visited the garden on Rugeley Road a number of times, we have found that, although is overgrown, it has a clear path from either end, has plants rather than weeds, and is not covered in litter or dumped items.

‘The owner has told us that he likes his plants and trees to attract wildlife. While the garden may not be to everyone’s taste, we do not believe it breaches any planning laws that govern complaints of this nature, and when comparing it to similar cases.

‘We also have powers to serve a community protection notice if someone’s behaviour is having a harmful effect on the quality of life of people living in the area. While some of the neighbours may not like the garden, others do as it does as it attracts birds.

‘Although there is a difference of opinion about how back gardens should be presented, there are insufficient grounds for us to serve a notice.

‘We are continuing to monitor the situation and are working with the owner who has agreed to cut back some of the vegetation after September so as not to affect any birds, which we think is a reasonable compromise.’