Tunis: Thousands of supporters of presidential candidate Kais Saied thronged the grand boulevards of central Tunis in celebration late on Sunday after exit polls said he was elected by a landslide.

Official results will not be published until Monday and Saied's opponent, the media mogul Nabil Karoui, has left the door open to an appeal. 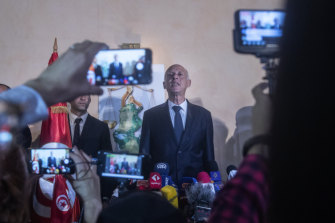 Sunday's vote was only Tunisia's second free presidential election and came after years of economic frustrations that overshadowed the legacy of the 2011 revolution which threw out autocratic rule and inspired the "Arab spring".

Saied, a retired law professor backed by both Islamists and leftists, spent barely any money on an election campaign that has seized the imagination of voters with its promise to bring back the values of the 2011 uprising.

"We need to renew confidence between the people and the rulers," Saied said in televised comments after two separate exit polls gave him more than 70 per cent of the vote.

If he is confirmed as president, Saied will face a difficult moment in Tunisian political history. 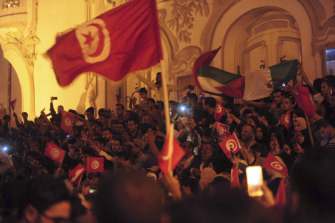 The parliament elected last week is deeply fractured and though the moderate Islamist Ennahda party that took most seats backed him on Sunday after its own candidate was beaten in the first round, it may struggle to build a ruling coalition.

The prime minister, chosen by parliament, has more direct powers than the president, but since he is the most senior elected official in Tunisia, he shoulders much of the public praise or blame for the state of the country.

All recent governments have been bedevilled by economic ills: unemployment of 15%, inflation of 6.8%, high public debt, a powerful union that opposes economic reforms and foreign lenders who demand them.

Karoui told a news conference he would decide whether to appeal after the electoral commission announces the official results, but said he had been denied a chance to compete fairly.

Karoui spent weeks in detention pending his corruption trial before he was freed on Wednesday, and spent the first round of the election behind bars.

One of the foreign election monitoring missions in Tunisia said earlier on Sunday that Karoui's detention had raised concerns about the vote, saying it was "not business as usual".

Karoui denies charges of money laundering and tax evasion, but the verdict in his trial is still pending.

Crowds of Saied supporters began gathering on the tree-lined Habib Bourguiba Avenue in central Tunis soon after polls closed, cheering slogans from the 2011 revolution in anticipation of him winning.

Elsewhere in the city centre, cars drove around the streets, honking their horns in celebration.

"We are happy because this victory returned the spirit of the revolution," said one of Saied's supporters there, who gave only his first name Nejib.

With voter turnout higher than in other recent elections in Tunisia, Sunday's poll appears to have reversed a recent trend of disillusionment with politics.

The electoral commission said after polls closed that turnout would be more than 60 per cent. In the first round of the presidential election, which put Saied and Karoui through to the runoff above 24 other candidates, turnout was only 45 per cent.

If his victory is confirmed, his first visit as president would be to Algeria, he said. He also spoke in support of the Palestinian cause.

Karoui courted the poor, showcasing his philanthropy on the television station he owns, but also appealed to the business elite and to some secular Tunisians worried about Saied's conservative social views.

Both candidates presented themselves as outsiders taking on an establishment that has failed to improve Tunisia's economy or arrest a decline in living standards.

At a polling station in the working class Ettadamon district on Sunday, a man stood haranguing passersby, urging them to vote against Karoui, until a policeman asked him to quieten down.

Inside, Hanan Madouri, a 25-year-old call centre worker in a big straw hat, voted for Saied, citing the corruption trial hanging over Karoui. "I want to vote for a correct, serious person," she said.

Opposite the polling station, Othman Dabbousi, 63, sat next to his fruit stand and said he would not vote, preferring a non-democratic system of rule. "There is a lot of chaos in this country and it needs a strong man," he said.

Nearby, a soldier stood with a hand on her assault rifle watching over the polling station, a reminder of the jihadist attacks that have sporadically shaken Tunisia, threatening its tourism industry and alarming voters.