London: Two cases of another new and potentially even more contagious variant of coronavirus first found in South Africa have been identified in the UK, as millions more people in England were told they would be placed under tougher restrictions from Boxing Day.

South Africa's health department said last week that a new genetic mutation of the virus had been discovered and might be responsible for a recent surge in infections there.

Britain's Health Secretary Matt Hancock said the new strain was "highly concerning" as the number of people in hospital with COVID-19 in the UK was nearing the peak from April. 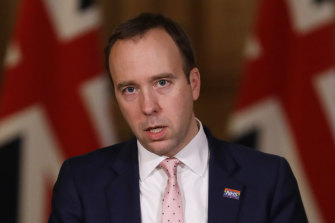 "Thanks to the impressive genomic capability of the South Africans, we've detected two cases of another new variant of coronavirus here in the UK," Hancock told a news conference at Number 10 on Wednesday, local time.

"This new variant is highly concerning because it is highly transmissible and appears to have mutated further than the new variant that's been discovered in the UK."

Britain was already trying to curb the spread of a mutated strain of the virus which is up to 70 per cent more transmissible, and further studies are being carried out. The South African variant, which was first reported by South Africa on December 18 is known as 501.V2 and has also been detected in Australia in travellers in hotel quarantine.

Scores of countries cancelled flights from the UK after last week's revelation of the new strain, which emerged in England's south-east. However, there is no evidence to suggest that that mutated strain is more lethal and health officials believe the vaccine will work against the mutated versions.

Britain recorded 39,237 new coronavirus infections on Wednesday from 453,903 tests, with cases up by 61 per cent in the last seven days.

A further 744 people with the virus died on Wednesday and there were 2000 new admissions to hospital, taking the total number of patients in hospital to 20,917.

The country is now locked in a race to vaccinate the population before hospitals are overwhelmed. The government expects to have vaccinated enough of the country to allow a relaxing of restrictions by April.

Britain is leading the rate of vaccinations on a per capita basis, with more than half a million people already receiving their first jabs of BioNTech and Pfizer's vaccine.

The fallout following the first discovery of the new strain last week has been immense with millions of Britons subjected to lockdown restrictions and told not to mix households on Christmas Day.

On Wednesday, Hancock said that from December 26, many more parts of southern England would be also be added to the highest level of social mixing restrictions, joining the 16 million already in Tier 4, while other areas across the country currently in lower tiers would also face tighter curbs.

The governments in Scotland and Northern Ireland have already announced that nearly everyone living in those countries would be subjected to the highest level of restrictions after Christmas.

On Wednesday, frustrations also boiled over at the Port of Dover where thousands of trucks are backed up waiting to cross the English Channel despite France and Britain striking a deal to reopen the border for freight.

Drivers have clashed with police, with officers removing one man who laid in front of his truck. There were also minor scuffles between police and drivers who were angry about the gridlock.

Drivers have been told to stay in their vehicles following French President Emmanuel Macron's decision to close the border after Britain last week announced the new coronavirus strain that had emerged in the county of Kent, where Dover is located.

Macron and Johnson announced a breakthrough on Wednesday morning AEDT to reopen the crossing, subject to all drivers being tested.

The military was deployed to conduct the rapid tests but a massive backlog remains.