Residents have captured the terrifying moment a freak sandstorm engulfs a Chinese city in minutes.

Apocalyptic footage shows the city of Hotan in western China being devoured by the sweeping sandstorm, turning skies orange and blocking out the sun with thick dust.

Another video filmed by a motorist shows his view from the windscreen being completely covered by the sand, with nothing visible in sight. 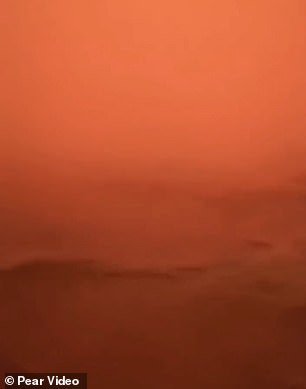 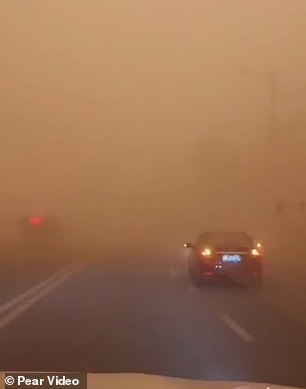 Residents have captured the terrifying moment a freak sandstorm engulfs a Chinese city in minutes. The scene was captured yesterday afternoon in the city of Hotan, western China 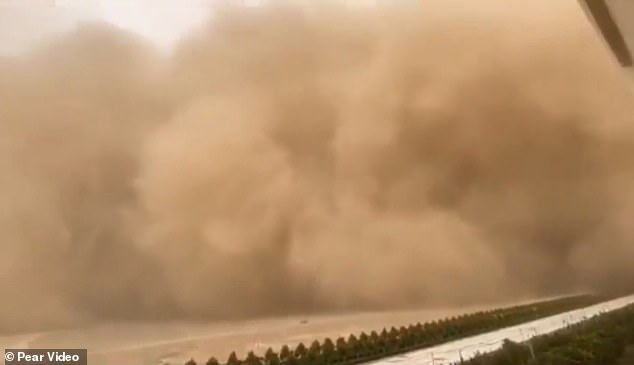 The picture shows the terrifying scene of the sweeping sandstorm being captured on camera by onlookers in Hotan, Xinjiang Autonomous Region of western China on Sunday afternoon

The terrifying scene was captured on camera by onlookers in Hotan, Xinjiang Autonomous Region of western China.

The sandstorm is said to have entered the city at 4:50pm yesterday with high swirls of winds over 46mph and a visibility of less than 50 metres (164 feet), according to Chinese media.

One video filmed by a driver shows the vehicles flashing with hazard lights carefully passing on a road as the sky is darkened by the thick sand.

A local resident who witnessed the freak weather described the monster sandstorm as ‘the worst one in years.’

The woman told Pear Video: ‘It was about 5pm today, I was walking down the street. The sandstorm suddenly came.

‘It came really fast, the winds were really strong and the visibility was extremely low,’ she added. ‘I felt like I couldn’t see anything. I felt like this sandstorm is the worst one I have seen in years.’

No casualties caused by the adverse weather condition have been reported.

The city of Hotan is susceptible to monster sandstorms due to its geographical location bordering Taklimakan Desert, China’s largest desert.

The extreme weather has become more common in recent years due to human activities and deforestation, Chinese media says.