South Korea: It is difficult, indeed heartbreaking, to watch. A woman in a purple jumper and white trousers leans down, as a pretty young girl in a mauve dress skips around her. The woman, Jang Ji-sung, is South Korean, and the girl whose hair she strokes and whose cheeks she caresses, is her daughter, Na-yeon.

But Na-yeon is dead. In fact, she died four years ago, aged seven, from a rare blood disorder that killed her within a month of diagnosis. 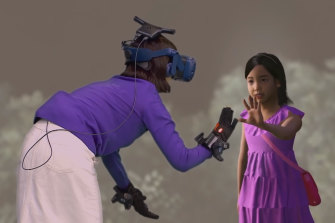 The heart-wrenching “reunion” between a mother, Jang Ji-sung, and an avatar of her deceased daughter, Na-yeon.

Jang Ji-sung is not having some sort of flashback, or even a spiritual experience. Rather, she has donned a virtual reality (VR) headset and been plunged into a digital world, created by the producers of a documentary, where she can meet her daughter again. There, a digital representation of Na-yeon, sculpted from photos and videos taken while she was alive, appears uncannily real. It darts around a computer-generated park just like a living little girl, shares a meal and chats away. Thanks to special gloves that generate a sense of pressure and touch in the virtual world, Jang Ji-sung even seems able to hold her daughter's hand.

"Mum!" the VR version of Na-yeon asks at one point, "Where have you been? Did you think about me?"

Her mother, weeping, replies: "I do, every day."

Welcome to the burgeoning DAI (Digital Afterlife Industry), where the dead can be virtually preserved or recreated to interact with their grieving families from beyond the grave. 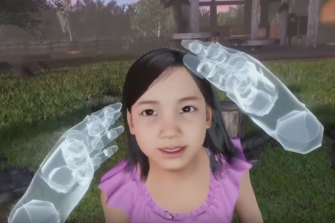 The haptic gloves create a sensation that the user is touching their loved one.

It is a bold claim from an industry that thrives on them – riding a wave of technological progress to offer digital immortality to people whose real-world bodies have failed them, and offering comfort for those left behind.

But it also raises a host of philosophical, ethical and moral questions about the nature of death, and the potential exploitation of the living. The South Korean television documentary Meeting You has sparked a fierce debate about the rights and wrongs of Na-yeon's digital reanimation. Even Jang Ji-sung's family seem divided, with the film-makers cutting to a shot of her husband and three surviving children looking on, understandably shocked at the "reunion". 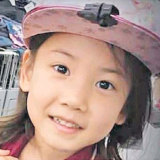 Na-yeon died four years ago, aged seven, from a rare blood disorder that killed her within a month of diagnosis.

"It's very important to appreciate not just the technological capability but also the social, economical and ethical side of these advances," says Carl Öhman, an academic at the Oxford Internet Institute. He notes that there remains "a lot of disagreement" among researchers about the cathartic nature of such experiments. "The community that forms around social media pages of the deceased can be a great comfort," he notes. "But when it comes to people using bots for this, it seems very nefarious. It's really not something we know much about. The opportunity for exploitation is definitely there."

Someone who has thought a great deal about such matters is Pete Trainor, a technologist who met and became great friends with a seriously ill young man from Liverpool called James Dunn.

Dunn, who I met last year, had Epidermolysis bullosa (EB), a condition that deprives the skin of collagen, leaving it fragile and as easy to tear as the wing of a butterfly – which is why it is known as the butterfly syndrome. It is fatal, and in the months before he died, aged 24, he and Trainor used microphones to collect and compile his thoughts into a "corpus" – a data set which would allow artificial intelligence to "recreate" him in text form, after he had died.

It was a project driven by Dunn. But even so, says Trainor, "my experience of being at the epicentre of one of these projects has really tested my morality.

"We didn't think about any potential weirdness when we started," he explains. "It was purely a project to document James' memories. It was never motivated by the desire to be reanimated. But I did start to realise quite quickly that there was going to be some real oddity. Because it speaks back. These memories are not a one-way thing. Having them respond – that's deeply strange." Dunn's parents, Lesley and Kenny, he notes, have never used the virtual James "bot" to communicate with him. Lesley prefers to sit by her son's graveside. 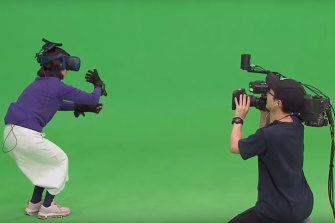 From a technological point of view, such weirdness is becoming more and more accessible. So-called "deep fake" software, which allows sophisticated video recreations of anyone, is available to download online, while we all commit more and more personal information to the internet – images, stories, thoughts, feelings – from which AI "corpuses" to recreate our own personalities can be derived.

"We leave behind so much data now, everything that was once ephemeral is now captured," says Elaine Kasket, author of All the Ghosts in the Machine, a book about the digital afterlife. "Search history, health and biometric data, conversations – somebody who wanted to put that all together and assemble a picture of you would know you better than you know yourself," she says.

This collision of deep fake technology and the deceased's data can only mean, says Trainor, that "there will be companies popping up saying, 'For 100 quid we're going to allow you to have conversations with dead relatives'."

And there will be increasing numbers of us choosing digital immortality. Indeed, it's already out there: online service, Eterni.me, offers the chance to "live on forever as a digital avatar" and claims that more than 46,000 people have already signed up to its service. "Deep fakes are already controversial, but with deep fakes of the dead there is an extra layer of controversy," adds Kasket. "For the first time we can revivify people in a realistic way. We've never been there before."

One of the problems is that, for all their realism, avatars are only inferring from the body of data what the real person might have said or done, using AI code written by others. So there will always be a question of whether its response is "real" or an effect of the software, or the software's creator.

"These are essentially dreams designed by human programmers," says Kasket. "Grief is so personal, [it's] different to everyone." She points to services such as Safebeyond, which the dying can use to send text messages to their relatives after they have gone. These can be triggered by a date – say birthdays – or a location.

"Some companies think 'Won't it be comforting and wonderful for widows to get messages from a husband on their anniversary'," says Kasket. "Or that a geolocation triggers a message at the Eiffel Tower saying 'Darling, I wish I was in Paris with you.' Well, some might think that's lovely but some might be horrified, like being stalked by the dead."

These are the questions that those behind the Digital Afterlife Industry must wrestle. But it's not all about death. The research project Augmented Eternity wants to compile a library of avatars for use in life, which we might be able to borrow and swap as needed. Faced with a tricky situation at work? Why not assume the identity of your most Machiavellian friend for an hour to scheme your way through it digitally?

And therein lies the problem. Because any commercialisation of avatars, even children, will mean that the customer is always right.

"Regardless of what the company says they're in it for, in a totally free market you will always head to the most profitable version of the deceased," says Carl Öhman.

"So rather than create an avatar just like the dead person, you create the avatar you can sell – a version of them at their best, maybe more pleasant, charming, less complaining." Or, in a child's case, sweeter, better behaved, angelic…

This may seem the ultimate product, the item we wish for more above all else: "You never want anything as much as when you grieve," says Öhman.

Yet for all their superficial advances – lifelike graphical renditions, accurate vocal responses and realistic turns of phrase – avatars are still only sophisticated automata, aping humankind's infinite variability. Simulations that replicate our intelligence but, critically, are incapable of generating it.

In that slim distinction lies the gulf between a rich life and empty machine, between fakery and the enduring truth that, for all technology's promise, we still have no idea how our brains work or what consciousness truly is. And that mysterious spark, few would disagree as they lie on their deathbeds, is what really gives us life.