Minsk: Minutes after Belarus President Alexander Lukashenko vowed to stand firm against protesters he reviled as "rats, trash and bandits," anti-government demonstrators staged their biggest protest yet after the fraud-tainted presidential election result.

Tens of thousands of protesters — some estimates put their number at more than 100,000 — turned out in the centre of Minsk, dwarfing a rally of Lukashenko's supporters earlier in the day. 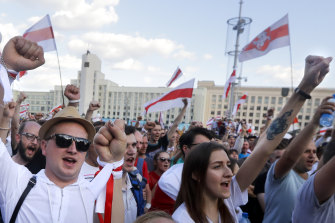 People with old Belarusian national flags shout during opposition rally in front of the government building of Minsk. Credit:AP

It appeared to be the largest protest in the history of Belarus, a former Soviet republic that Lukashenko has ruled since 1994.

As the crowd gathered in the Belarus capital around a Soviet-era obelisk on Victors Avenue, many chanted for Lukashenko to leave and waved the traditional white and red flag, which became a symbol of the opposition after the president replaced it with a more Soviet-looking national flag soon after he came to power.

The protest had a festive air, in stark contrast to the tense mood of far smaller rallies after last week's election that were violently suppressed by security forces, leaving at least two people dead, many injured and more than 6000 under arrest.

The protest came in response to a call for a "March for Freedom" by Svetlana Tikhanovskaya, the main opposition candidate in the presidential election. 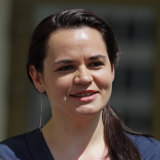 She joined the race after the arrest of her husband, Sergey Tikhanovsky, a popular blogger who had planned to run as a candidate. Tikhanovskaya, who says she won the election, was forced to leave Belarus for neighbouring Lithuania early last week.

The mass protest on Sunday suggested that Lukashenko, who claimed a landslide re-election victory with 80 per cent of the vote on August 9, had failed in his efforts to intimidate opponents through a frenzy of police violence and increasingly strident warnings that the unrest could open the way for military action by NATO.

Addressing his supporters, many of them state employees, at an outdoor rally in Minsk on Sunday afternoon, Lukashenko attacked his opponents with defiant and often crude bravado, insulting his critics, rejecting calls for a new election and accusing NATO of massing on his country's western border.

Denouncing his foes as traitors "controlled by puppeteers, by outsiders," Lukashenko, a 65-year-old former state farm director who is often called "Europe's last dictator," warned that "even if they calm down now, they will again crawl out of their holes like rats after awhile". 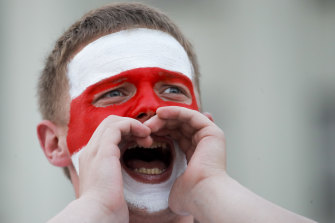 A man with a face painted with the old Belarusian national flag, shouts during opposition rally in front of the government building of Minsk.Credit:AP

His claims of a military buildup by the US-led military alliance followed a pledge by President Vladimir Putin of Russia that Moscow would support Belarus if it faced a military threat from outside.

In a statement issued Sunday, the Kremlin said that Russia stood ready "to provide the necessary assistance to resolve the problems that have arisen" and referred to a collective security treaty signed in the early 1990s by Russia, Belarus and seven other former Soviet states. The treaty stipulates that aggression against one member of the alliance amounts to an attack on all of them.

Lukashenko seems to have calculated that he can best secure Russian help against his domestic opponents by ginning up a fake military crisis on the border. The Belarusian Defence Ministry said that it would hold military exercises near its western border from Monday through Thursday.

NATO's spokesman Oana Lungescu said the alliance "is closely monitoring the situation in Belarus" but added that "there is no NATO buildup in the region". 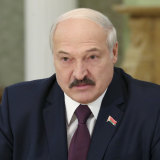 Just weeks ago, Lukashenko was accusing Russia of plotting to overthrow him. But facing the biggest political challenge of his 26-year rule, he made a u-turn, the latest in many over the years by the highly erratic president, and now looks to Moscow as his best hope of survival.

Whether Putin, who has increasingly tired of Lukashenko's flip-flops and periodic flirtation with the west, wants him to survive, however, is an open question. The Russian leader offered his congratulations on an election victory that European countries and the United States dismissed as fraudulent.

But a Kremlin account of a telephone conversation between the two leaders Saturday did not include any endorsement of Lukashenko staying in power. A prominent pro-Kremlin politician, Konstantin Zatulin, last week described Lukashenko as "deranged" and his re-election as "a total falsification."

In a sign of growing disenchantment among even government employees, the Belarusian ambassador to Slovakia, Igor Leshchenya, posted a video on YouTube on Sunday expressing support for the protesters, saying, "Like all Belarusians, I am shocked by accounts of torture and beating against my fellow citizens".

Even state-run factories — once solid bastions of support for Lukashenko — have tilted toward the opposition, with strikes gathering steam late last week at a number of state-owned industrial enterprises, including a tractor factory in Minsk.

The most important news, analysis and insights delivered to your inbox at the start and end of each day. Sign up to The Sydney Morning Herald’s newsletter here, to The Age’s newsletter here and Brisbane Times‘ here.