Rail delays caused by leaves on the line rocket by three quarters in a decade, Network Rail admit

Delays caused by leaves on train lines have soared by more than three quarters in less than a decade.

Passengers endured almost 6,500 hours of delays because of leaf falls in the past year – up 78 per cent from nearly 3,650 hours in 2009/10, according to figures from Network Rail.

In the worst-hit areas, there has been an even bigger rise. 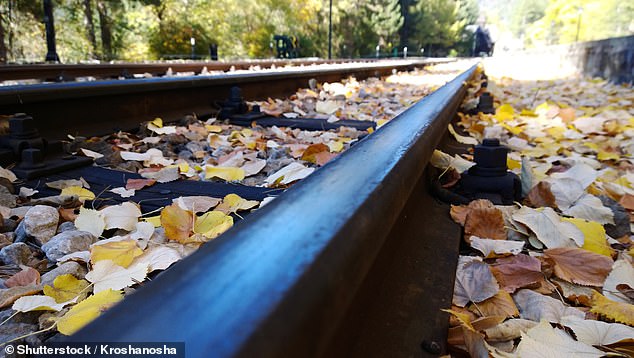 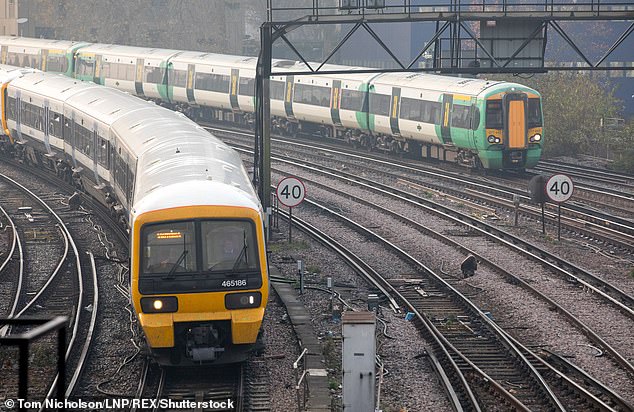 Over the past 12 months passengers have endured 6,500 hours of delays due to leaves

The delays include all hold-ups attributed to leaf falls, including speed restrictions imposed on rail operators every autumn as tracks become more slippery. Problems are often caused by trees being allowed to grow too close to tracks or rail workers failing to clear leaves from train lines quickly enough.

It comes at a time of widespread disruption by strikes, signalling faults, broken overhead cables and over-running engineering works.

Waiting for a delayed train is bad enough. But it’s even worse when platform signs claim the service is ‘on time’.

Now new technology is set to change all that.

A GPS tracking system will be introduced by five operators from next month, replacing the current system which measures train locations at fixed points more than five miles apart.

Chiltern, Grand Central, LNER and parts of Northern and ScotRail will be the first to use the system which is accurate to within a few metres.

The technology is due to be used nationally by 2024.

Wes Streeting, a Labour member of the Treasury committee, said: ‘It beggars belief that rail companies in the 21st century haven’t managed to crack the challenge of few leaves falling from trees in the autumn. The resulting delays are totally unacceptable.’ The industry has blamed the increase in delays on a rise in the number of services and ‘more extreme’ weather.

But figures from the Office of Rail and Road (ORR) show the number of scheduled journeys has risen by only 7 per cent over the past decade from 6.8million to 7.3million.

The ORR launched enforcement action against Network Rail last week over its inability to restore services quickly after incidents.

The Rail Delivery Group, which represents operators and Network Rail, said: ‘The industry is continually assessing new ways to reduce the impact autumn conditions have on train service punctuality.’