Public sector debt hit a new high of £2.08TRILLION at the end of October as the Government borrowed £215billion in just seven months to prop up the UK economy during the coronavirus crisis

Public sector debt hit a new high of £2.08trillion at the end of October as the Government’s coronavirus borrowing surged to almost £215billion in just seven months.

Data published this morning by the Office for National Statistics (ONS) showed the UK’s overall debt has now reached 100.8 per cent of gross domestic product.

That is the highest it has been since the early 1960s when Britain was still wrestling with the economic fall out from the Second World War.

The numbers represent a major headache to Chancellor Rishi Sunak as he prepares to announce the Government’s spending review next week. 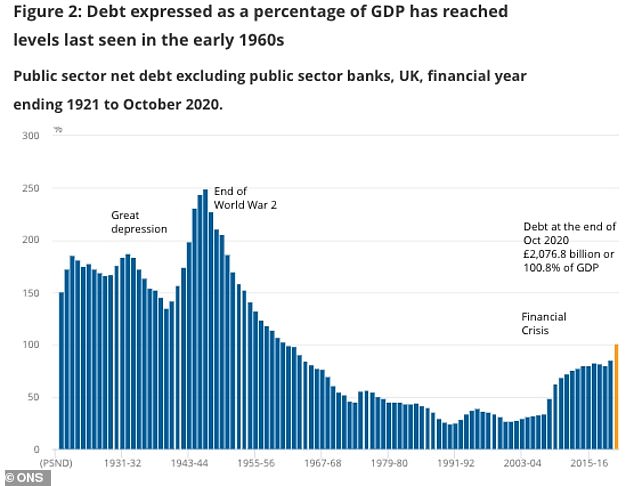 Public sector debt has now hit £2.08trillion pounds – some 100.8 per cent of GDP, the highest recorded since the early 1960s 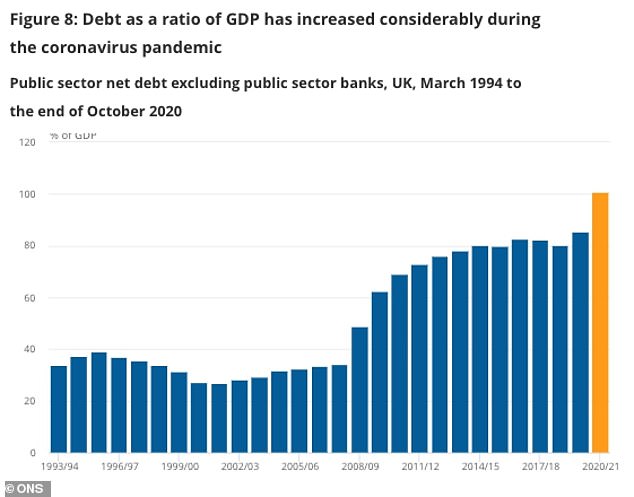 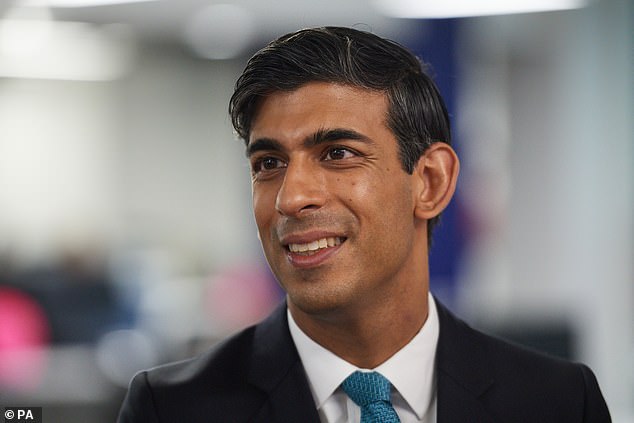 The coronavirus crisis has seen Government borrowing surge in every month since March, and October was no different.

Borrowing for the first seven months of the financial year has been estimated at some £214.9billion.

That is the highest amount of borrowing ever recorded in any April to October period and almost £170billion more than in the same period last year.

Public sector net debt has increased by £276.3billion in the first seven months of the financial year, reaching £2.076trillion at the end of October.

Experts said it leaves the Chancellor facing a difficult balancing act ahead of the Spending Review on November 25, with the end of the post-Brexit transition period also looming at the end of the year and the UK and the EU yet to agree a trade deal.

Mr Sunak stressed the UK’s public finances will need to be put on a ‘sustainable path’ over time.

He said: ‘We’ve provided over £200 billion of support to protect the economy, lives and livelihoods from the significant and far-reaching impacts of coronavirus.

‘This is the responsible thing to do, but it’s also clear that over time it’s right we ensure the public finances are put on a sustainable path.’

The figures come amid reports Mr Sunak will use next week’s review to limit pay rises for five million public sector workers to help rebuild the public finances.

It is thought he will cap pay rises in the public sector to at or below inflation, though frontline NHS doctors and nurses will likely be exempt from the cap in recognition of their work during the coronavirus pandemic.

The spending review will be accompanied by the latest economic and fiscal forecasts by the Office for Budget Responsibility (OBR).

While borrowing in the financial year so far has been less than predicted by the fiscal watchdog, it is still thought to be on track to come near its full financial year forecast of £372.2 billion by the end of March 2021. 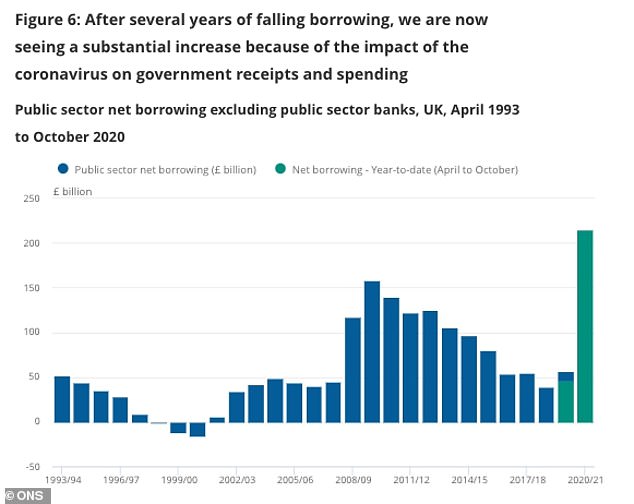 Ministers have now borrowed almost £215billion in the last seven months, the highest amount ever recorded in an April to October period 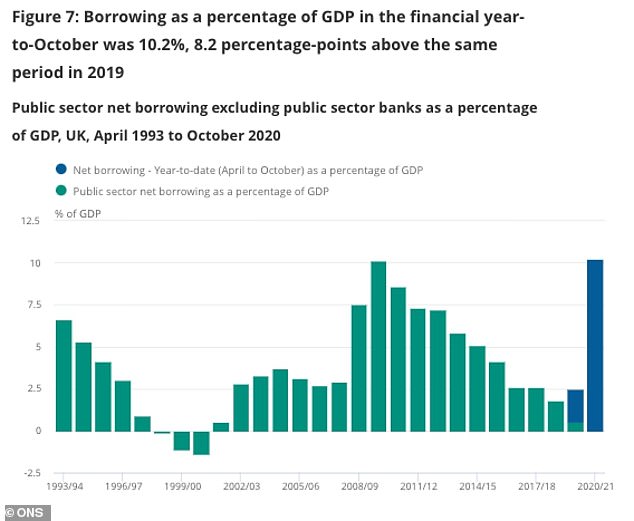 Borrowing as a percentage of GDP during the current financial year has hit 10.2 per cent, some 8.2 per cent higher than during the same period last year

Samuel Tombs at Pantheon Macroeconomics said: ‘The borrowing undershoot is attributable almost entirely to tax receipts in the year-to-date exceeding its forecast by £71.4 billion, due to the higher path for GDP in the second quarter and third quarter than the OBR anticipated.’

He added the borrowing trend will ‘deteriorate in the winter and the OBR won’t revise down its borrowing forecast next week’.

Government spending on day-to-day activities rose to £71.3 billion, up £6.4 billion on a year earlier, including £1.3 billion on the furlough scheme and £300 million in Self Employment Income Support Scheme (SEISS) payments.