Protesters march outside Jeff Bezos’ $165million Beverly Hills mansion to demand the Amazon billionaire pay more taxes and take responsibility for the 20,000 workers who have tested positive for COVID

Protesters marched to Amazon CEO Jeff Bezos’ palatial Beverly Hills mansion to demand the company address environmental and labor issues that came to a head during the pandemic.

Saturday saw a coalition of labor and environmental activists gathered at Will Rogers Memorial Park on Sunset Boulevard to decry Bezos and his multi-billion dollar e-commerce empire during ‘The Wrong Amazon is Burning’ event.

The Congress and Essential Workers, a group of current and former Amazon warehouse employees, organized the rally and it was spearheaded by Chris Smalls of Staten Island, New York.

Smalls, a former Amazon warehouse staffer, was fired from his position in March after he organized a protest over what he described as a lack of PPE and hazard pay amid the COVID-19 pandemic.

‘We demand that Jeff Bezos and the rest of the billionaire class pay their fair share to deal with the climate crisis,’ TCOEW said in a statement, per Patch.

‘We are calling for a decent living wage of $30/hour minimum for all Amazon employees, Medicare and childcare for all, and the right to unionize without fear of retaliation. These are just a few of the issues that we feel billionaires like Jeff Bezos, who makes nearly $4,000 a second, can absolutely help relieve or resolve.’ 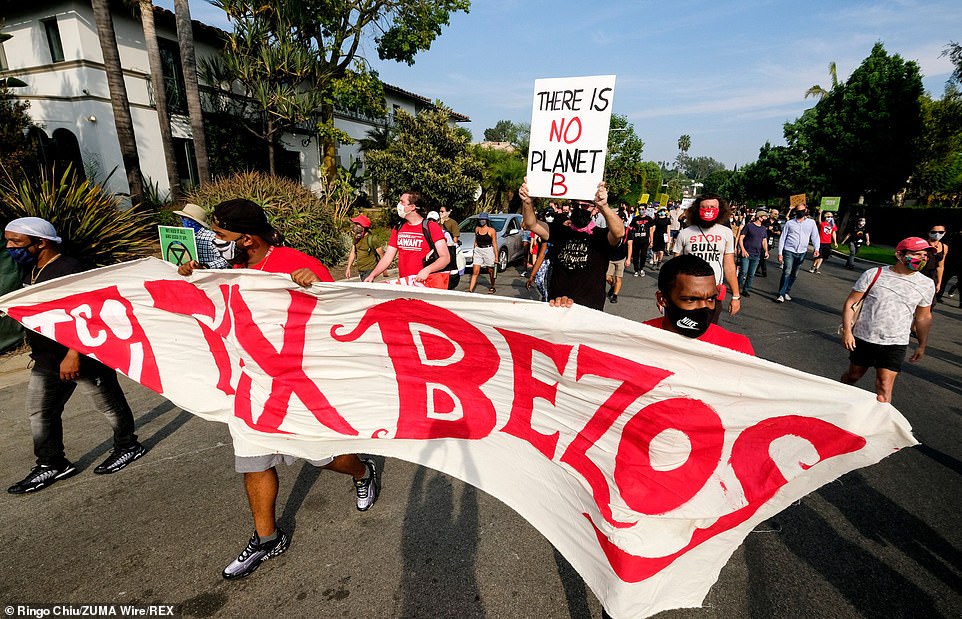 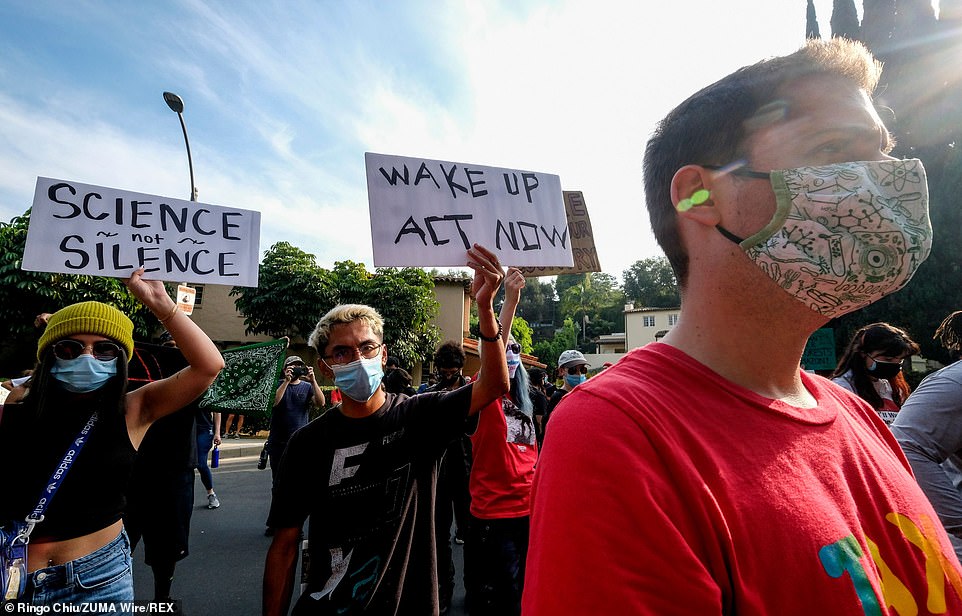 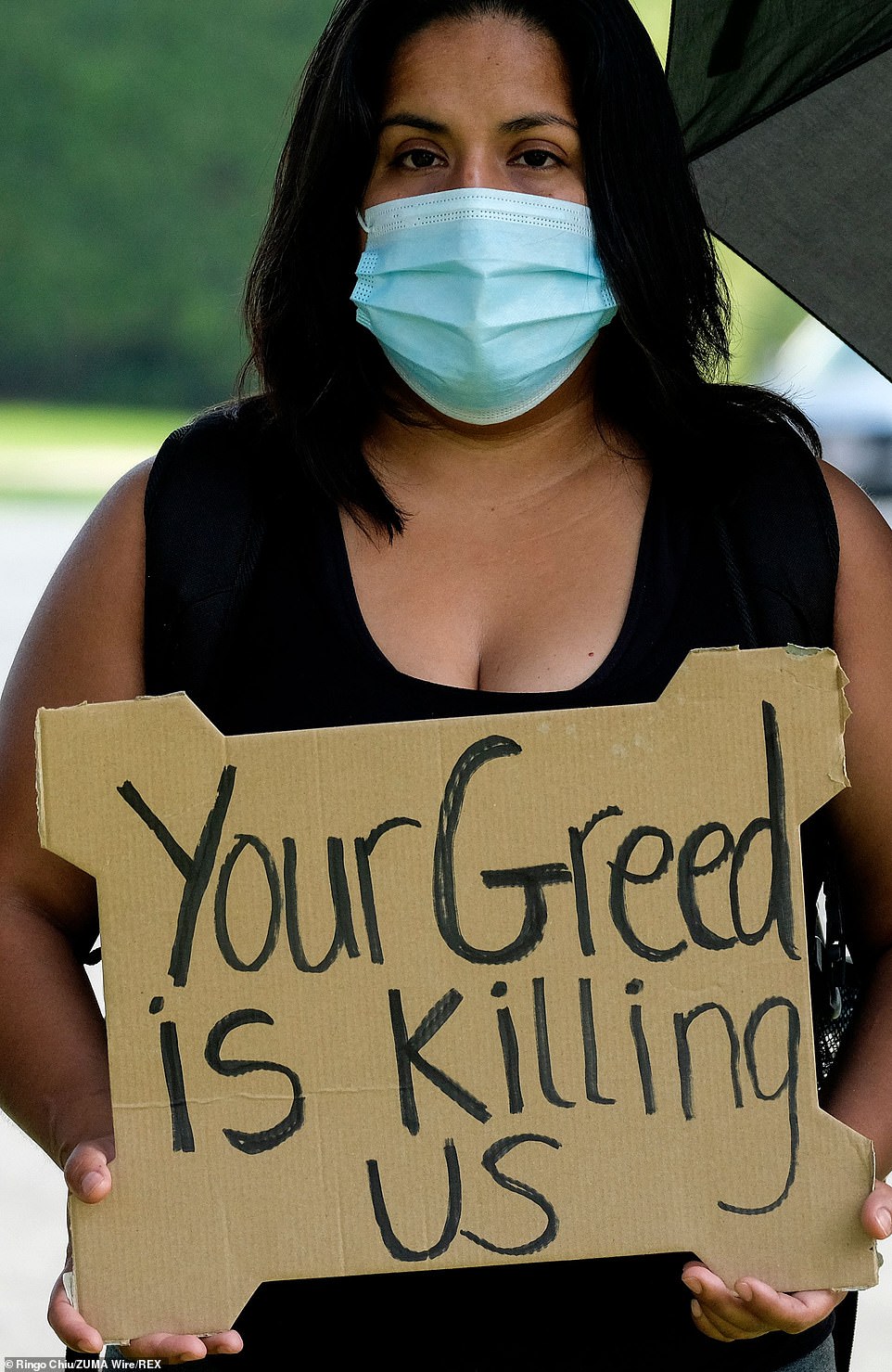 Pictured: A demonstrator holds a sign during a protest prior to a march to Amazon founder Jeff Bezos’ mansion to lobby for higher wages, the right to unionize and a series of reforms in the way the giant company handles the COVID-19 crisis 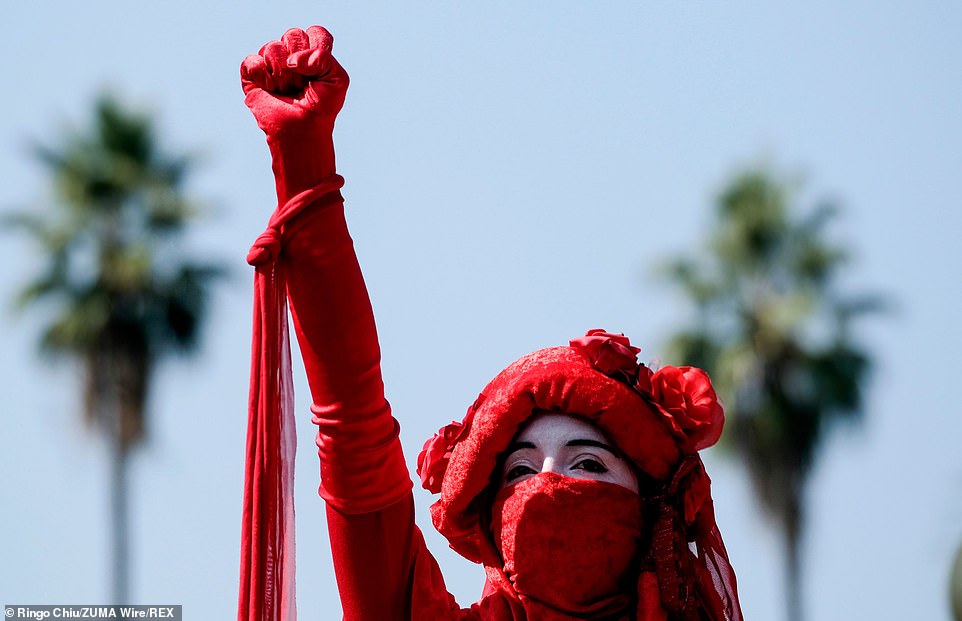 The crowd of demonstrators who shouted ‘f*** Bezos,’ who’s worth $185billion, were joined by climate activist groups Sunrise Movement and Extinction Rebellion.

Demonstrators who donned face masks hoisted signs that read ‘f*** Bezos,’ ‘your greed is killing us,’ ‘abolish billionaires’ and ‘share with your country!’

Other signs urged Bezos to consider environmental changes, including one that said ‘there is no planet B’ and ‘science not silence.’

At one point, members of the artivist troupe, Red Rebel Brigade Manifesto, wore red ensembles during a performative piece aimed at highlighting the global environmental crisis.

As the group of determined protesters drew near Bezos’ mansion, they chanted ‘tax Bezos’ while someone played the drums. 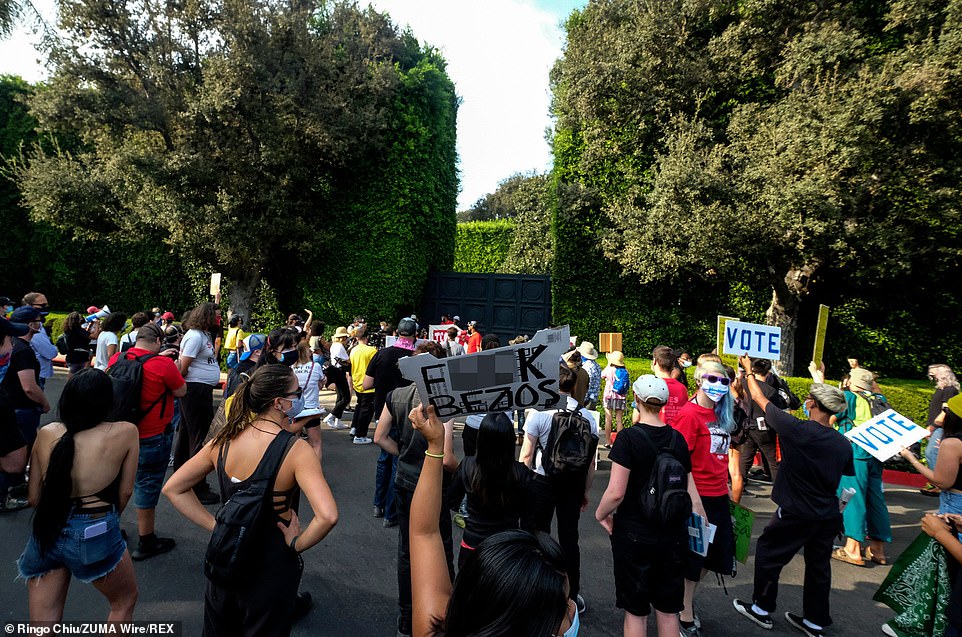 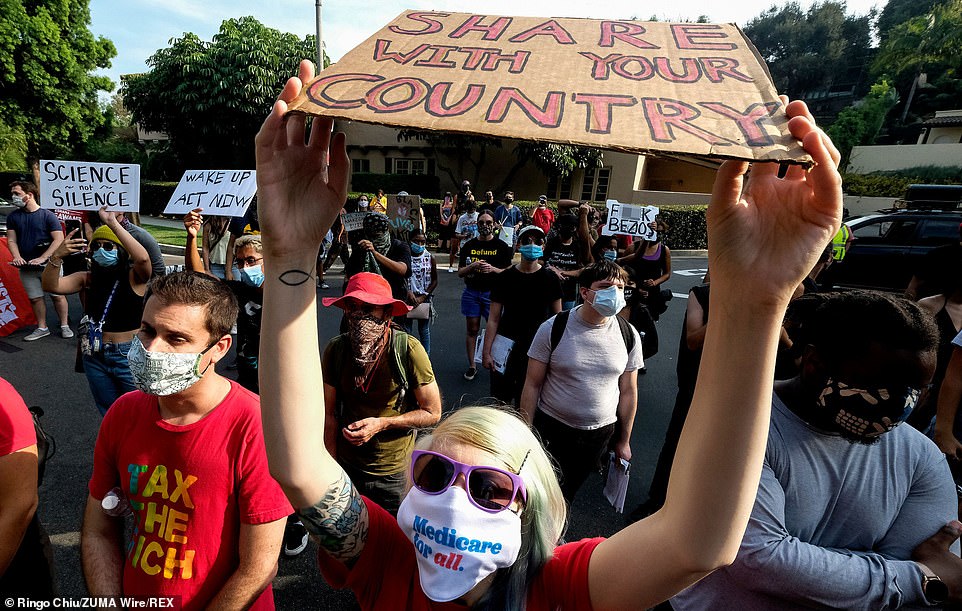 Demonstrators who donned face masks hoisted signs that read ‘f*** Bezos,’ ‘your greed is killing us,’ ‘abolish billionaires’ and ‘share with your country!’ 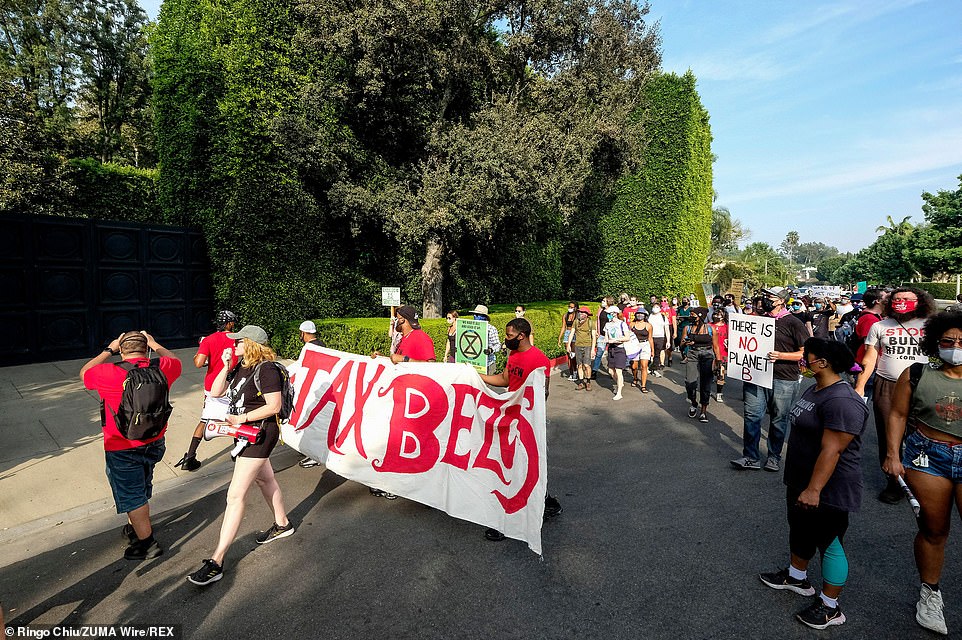 Demonstrators march to Amazon founder Jeff Bezos’ mansion to lobby for higher wages, the right to unionize and a series of reforms in the way the giant company handles the COVID-19 crisis 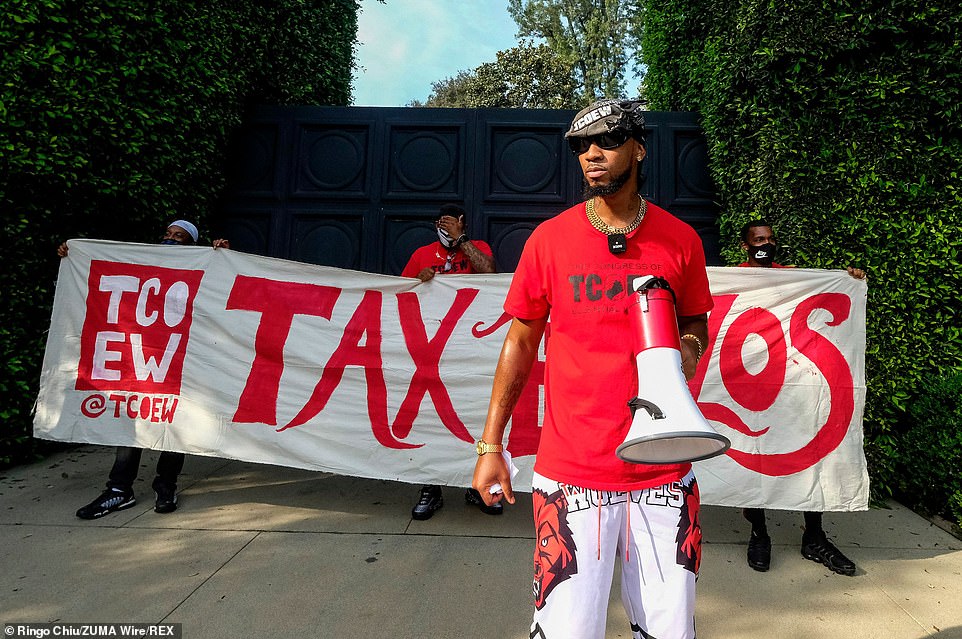 Once the group arrived to Bezos’ grand front gate, Smalls used a bullhorn to rally the crowd and declared ‘enough is enough.’

After Smalls’ dismissal, Amazon officials said he was fired for ‘violating social distancing guidelines and putting the safety of others at risk.’

But Smalls asserted that it was retaliation for organizing a workers protest.

In the memo obtained by Vice News, top Amazon executives planned to smear 31-year-old Smalls, a management assistant, after he spearheaded a walkout of several employees on March 30 over coronavirus safety fears.

The top bosses referred to Smalls as ‘not smart’ and discussed placing him as the face of the workers’ walkout.

‘He’s not smart, or articulate, and to the extent the press wants to focus on us versus him, we will be in a much stronger PR position than simply explaining for the umpteenth time how we’re trying to protect workers,’ wrote Amazon General Counsel David Zapolsky. 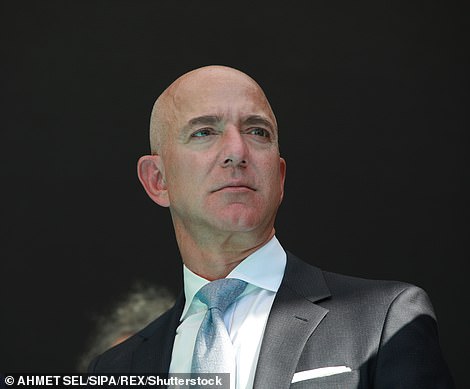 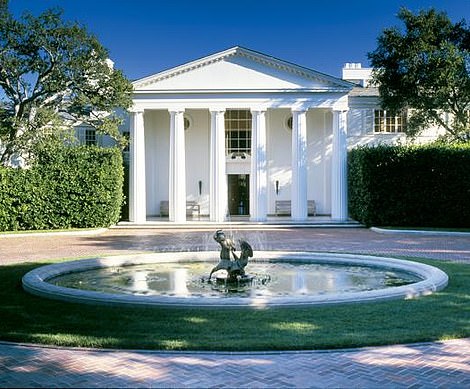 Jeff Bezos (left) owns a $165million mansion in Beverly Hills (right), which sits behind a large gate in an affluent part of the city 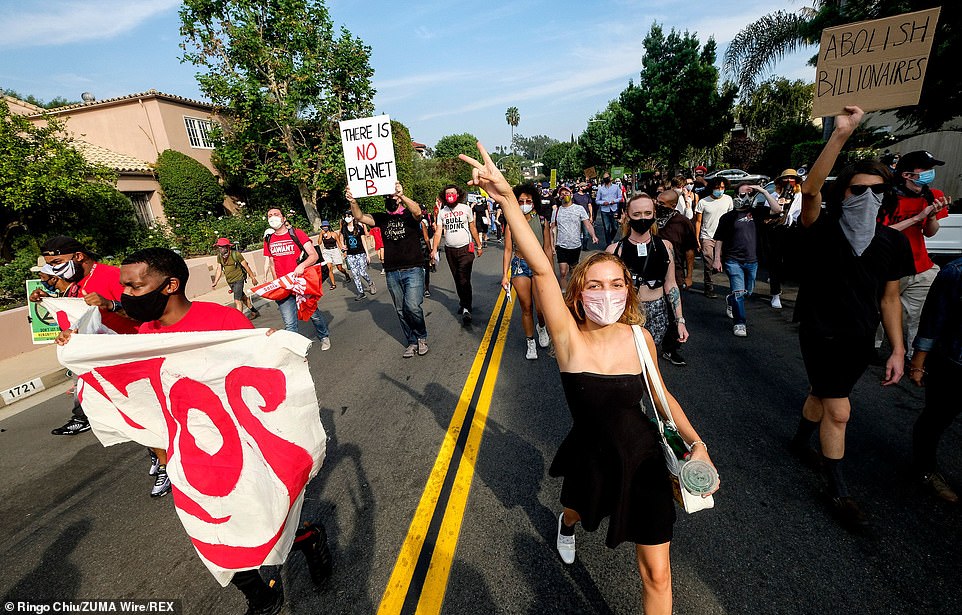 Sunday’s protest comes after Amazon revealed nearly 20,000 employees have tested positive for COVID-19 and ahead of the company’s annual Prime Day

In the memo, which took place at a day meeting and included CEO Jeff Bezos, Zapolsky’s notes reportedly show executives mapping how to navigate bad press of Smalls’ firing.

They allegedly wanted to make Smalls the center of Amazon’s narrative about worker safety.

Zapolsky wrote: ‘We should spend the first part of our response strongly laying out the case for why the organizer’s conduct was immoral, unacceptable, and arguably illegal, in detail, and only then follow with our usual talking points about worker safety.

‘Make him the most interesting part of the story, and if possible make him the face of the entire union/organizing movement.’ 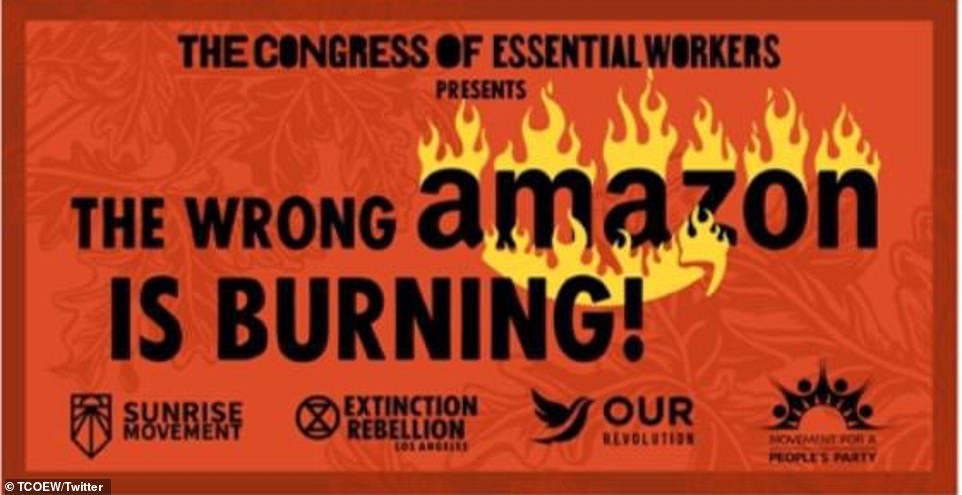 Pictured: A promotional flyer for ‘The Wrong Amazon is Burning’ event held on Sunday 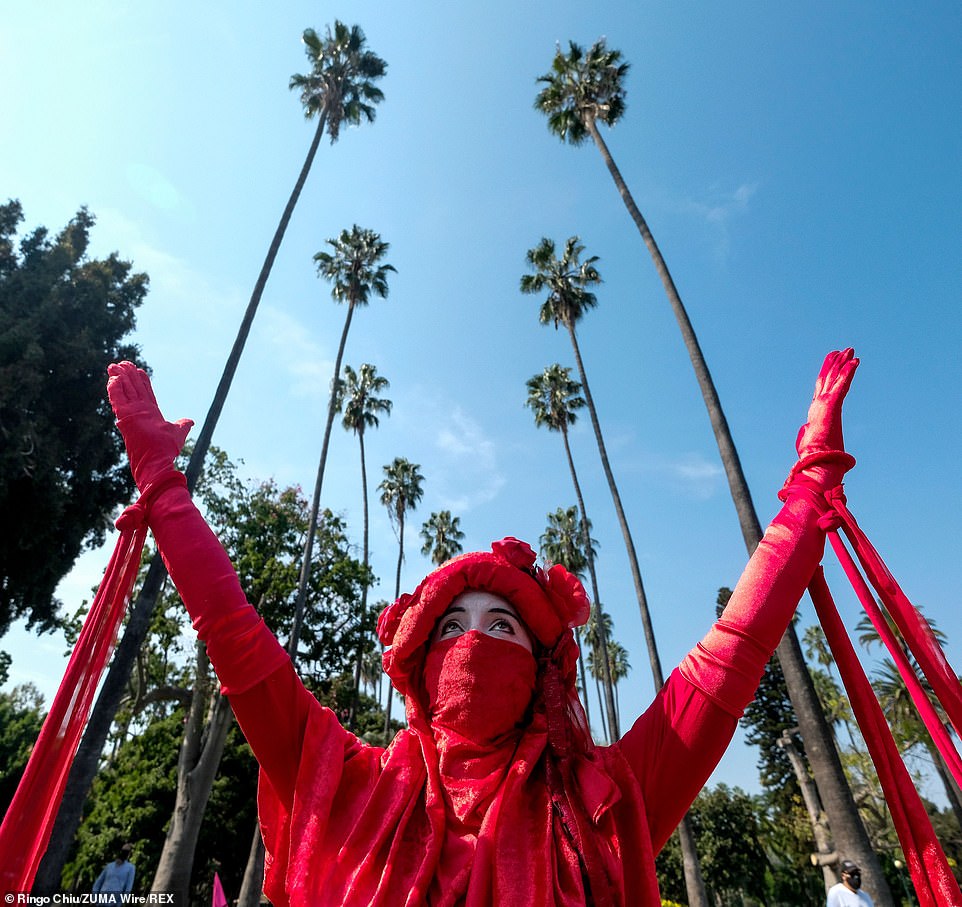 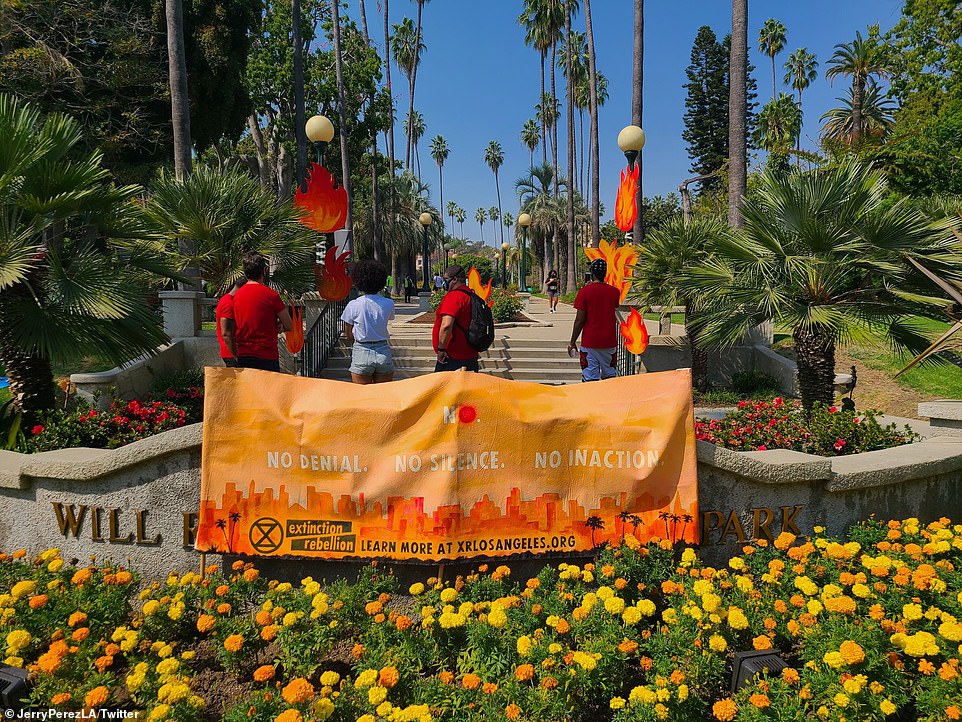 Sunday’s protest came after the recent revelation that nearly 20,000 Amazon workers in the United States have tested positive for COVID-19, per a blog post. And ahead of Amazon’s annual Prime Day, in which the company offers discounted sales and lowered prices on various items.

‘Employees are not going to be treated fairly and going to have mandatory overtime and have no breaks for the next two months into December,’ said Jordan Flowers, an Amazon warehouse worker from Staten Island, per CNet.

Although Prime Day has been used to highlight consumer perks, it’s often a hectic time for warehouse employees who’ve complained of the overwhelming workload.

Prime Day protest have previously been held in places like New York City, Seattle and across Europe.

‘Cancel your Prime memberships, order less on Prime Day week and give us time to be prepared because peak season is hectic,’ said Flowers, in reference to the holiday season.

In addition to the protest, TCOEW released a media statement that outlined a number of demands from the group.

‘Amazon must be transparent and honest about the number of cases they have in their facilities,’ one demand said.

DEMANDS TO AMAZON per The Congress and Essential Workers

The Congress and Essential Workers have released a list of demands for Amazon, including:

• All employees to be retroactively paid for all unpaid time they have used from March until the facilities are safe for workers.

• PPE and cleaning supplies to be provided at all times by the company.

• Employees who receive a COVID-19 test are to be placed on paid leave until test results are confirmed, and not to return until they test negative for COVID-19 with 100% percent pay not a percentage.

• Buildings or locations that have positive cases are to be shut down, professionally sanitized, and remain closed for a minimum of 14 days with 100% percent pay for all affected employees.

• $2/hour Hazard pay increase or sick time pay is to be provided during the duration of the COVID-19 pandemic.

• Amazon must be transparent and honest about the number of cases they have in their facilities.

• Reinstatement of all employees who have been terminated during the COVID-19 pandemic for refusing to work, protesting, or related reasons.

• Employees that have lost their lives during the Pandemic Families to receive $200,000 in addition to life insurance policy payments directly from Amazon.

• A 1-3% Federal Wealth Tax; money collected will be distributed to fund the urban communities and organizations that the Employers are invested in.

• $30/hour minimum – We demand a living wage! Jeff Bezos net worth is $188 billion dollars and is trending to be the world’s first Trillionaire. Amazon has over a million employees worldwide yet pays employees minimum wage $15.50 which is insufficient to the amount of value a worker really deserves.

• Free Childcare and Healthcare to be provided by Amazon

• No wage cap and monthly bonuses for productivity or sweat equity (attendance).

• Money generated from the Wealth Tax is to be distributed not only to fund Amazon workers but also to help deal with global crises like Climate control, Homelessness, and Pandemics.

• We demand that workers have the right to unionize and sign employee/employer contracts that are renewed annually so that our demands are negotiated and upheld by all parties involved and workers are not vulnerable to backlash from management.