A major Melbourne developer is suing the Andrews government for $240 million in compensation after claiming the value of farmland it owned plummeted when the state earmarked the area for inclusion in a reserve for critically-endangered grassland.

A string of writs by companies linked to the Dennis Family Corporation were lodged in the Supreme Court on Wednesday, just weeks after an investigation by The Age revealed landowners were planning to sue the government over the Western Grassland Reserve. 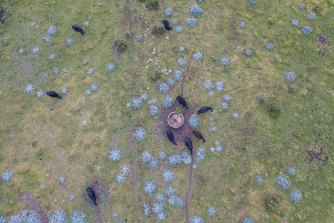 Cattle on a degraded area of grassland near Little River, hit by grazing and overtaken by artichoke thistle and boxthorn.Credit:Justin McManus

The Age also revealed the government was struggling with a huge cost blowout to establish the reserve, with only $53 million set aside to pay for it despite soaring land prices and compensation outlays that had doubled the estimated cost of the program since 2013 to almost $2 billion.

The Dennis Family Corporation is claiming compensation for the impact of a “public acquisition overlay” – which reserves land for a public purpose – placed over land earmarked by the Brumby government for the grassland in 2010.

The overlay, which the Dennis Family Corporation had slammed as a "planning blight," flagged the government's intention to buy private properties to establish the reserve. It also restricted what owners could do with their land.

The family lodged seven writs for claims worth up to $240 million. The Dennis Family Corporation refused to comment on Thursday. Its claim is likely to provide a signal to other landowners within the reserve to take their complaints to court.

In 2010 the Brumby government promised to establish the reserve by 2020 as part of a plan to protect grasslands listed as critically endangered by the federal government. The Rudd government gave the tick to Victoria’s plan to create large reserves that would offset the smaller patches of grassland elsewhere on the urban fringe which were bulldozed for housing.

But rather than compulsorily acquiring the reserve with upfront funding, Victorian governments, both Labor and Coalition, promised to make developers pay a levy for removing smaller grassland patches as they built new suburbs.

Documents obtained under freedom of information reveal in May 2019 the government was in confidential negotiations with the Dennis Family Corporation to buy 2500 hectares of land within the 15,000-hectare reserve. The documents revealed the Dennis family refused a government offer and in mid-2019 told the state environment department it planned to sell the properties privately. It also said it would claim compensation for the impact of a public acquisition overlay. 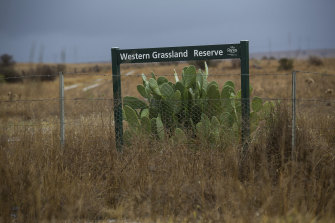 A big clump of non-native prickly pear on the boundary of a Victorian grassland reserve that was created in 2010 but never completed.Credit:Paul Jeffers

Environmentalists and experts say the reserve program is failing the endangered grasslands and woodlands it was supposed to protect. The Victorian Auditor-General recently found the government had bought just 10 per cent of the land for the reserve.

“These grasslands are precious natural treasures for all Australians and yet they have been degraded, destroyed and neglected,” Mr Abrahams said.

“This failure to act has cost the grasslands and may now cost Victorians hundreds of millions of dollars at a time when the federal government should be strengthening our environment laws because strategic assessments like this have clearly failed.”

This week the Morrison government introduced a bill that proposes changes to environmental laws that will transfer the power to approve major projects to the states and territories. Labor says it will vote against the changes.