Prison guards catch a visitor, 22, with TEN mobile phones and their chargers hidden in his trainers

Vigilant prison guards caught a visitor trying to smuggle ten mobile phones and chargers in his trainers, as well as Class A and B drugs.

The 22-year-old man arrived at HMP The Mount in Hertfordshire to visit an inmate and had hidden phones under the soles of his black Nike trainers, with five phone chargers hidden in each shoe.

Prison guards spotted the devices which are believed to be Zanco Fly mobile phones, which are said to be the world’s smallest phone, measuring just over two-inches long.

A spokesman for Hertfordshire Police said the man was also found to be in possession of Class A and Class B drugs – and that he has been released on bail. 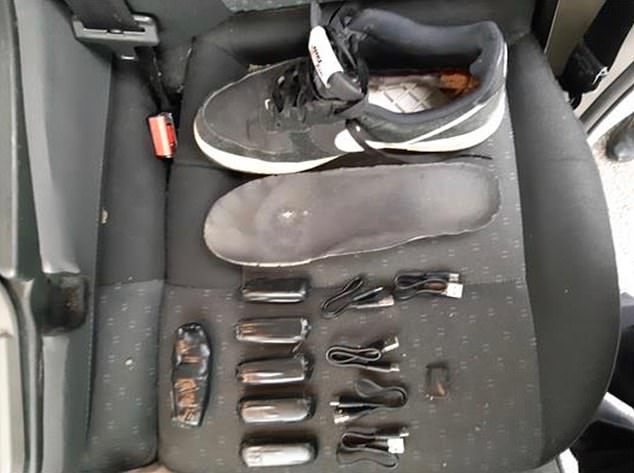 ‘Officers from several teams worked in partnership with staff at the prison.

‘A quantity of drugs and several mobile phones were seized during an operation to target people smuggling contraband into The Mount prison in Bovingdon.

‘Officers from the Safer Neighbourhood Team, Operational Support Group, Scorpion team and the Bedfordshire, Cambridgeshire and Hertfordshire Dog Unit were involved in the day of action, alongside staff from HMP The Mount.

‘Visitors on the day were stopped and searched, as well as their vehicles. As a result a 22-year-old man was arrested after 10 miniature mobile phones were allegedly found inside a shoe.

‘Two packages believed to contain Class A and B drugs were also found during the search. His vehicle was also seized for having no insurance – he has been released on bail.’

Another man visiting the prison was found to have been in possession of a small amount of cannabis and was driving an Audi which was not insured. 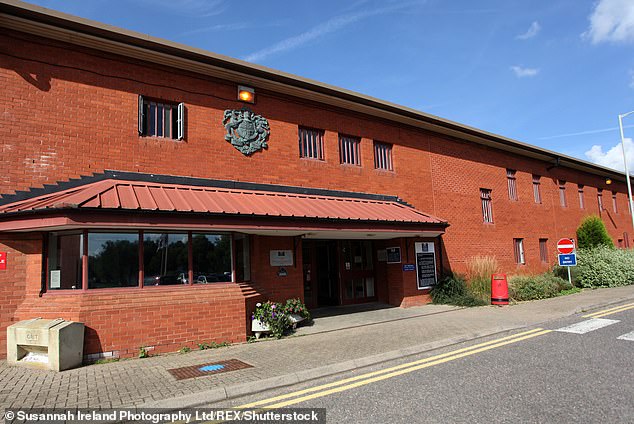 PC Karl Diggins, who led the operation, said: ‘We have been regularly running this operation for just over a year now and have managed to prevent a good haul of contraband, such as mobile phones and drugs from getting into the prison as a result.

‘Several people have also been banned from visiting.

‘We will continue to work with our partners at The Mount to conduct further days of action, in order to crackdown on those who are facilitating criminal activity.’

A spokesperson for the Prison Service said: ‘This an example of the excellent partnership working that exists between HMP The Mount and Hertfordshire Constabulary that prevents illicit items from entering the prison.’

Earlier this year it had been revealed that drones were being used to flood the prison with ‘zombie drug’ Spice after security netting collapsed and was not replaced for four months.

Inspectors from the Independent Monitoring Board (IMB), in a report out in the summer, found an average of 20 prisoners a month needing emergency care after gorging themselves on the highly potent synthetic cannabis.

The Independent Monitoring Board stated: ‘The healthcare team has had a challenging year with the use of psychoactive substances or Spice reaching an all-time high at the beginning of the year.

‘Netting used to protect the prison from throw-overs was brought down by snow.

‘Anecdotally, since then drugs and mobile phones have been widely available.’

It added: ‘It has been a very difficult year for the drugs programmes mainly due to regime changes plus a move which did not go smoothly.

‘The substance abuse courses were not working due to specific circumstances on the wing; mainly due to the fact that drug-fuelled drones were arriving regularly at unprotected cell windows.’